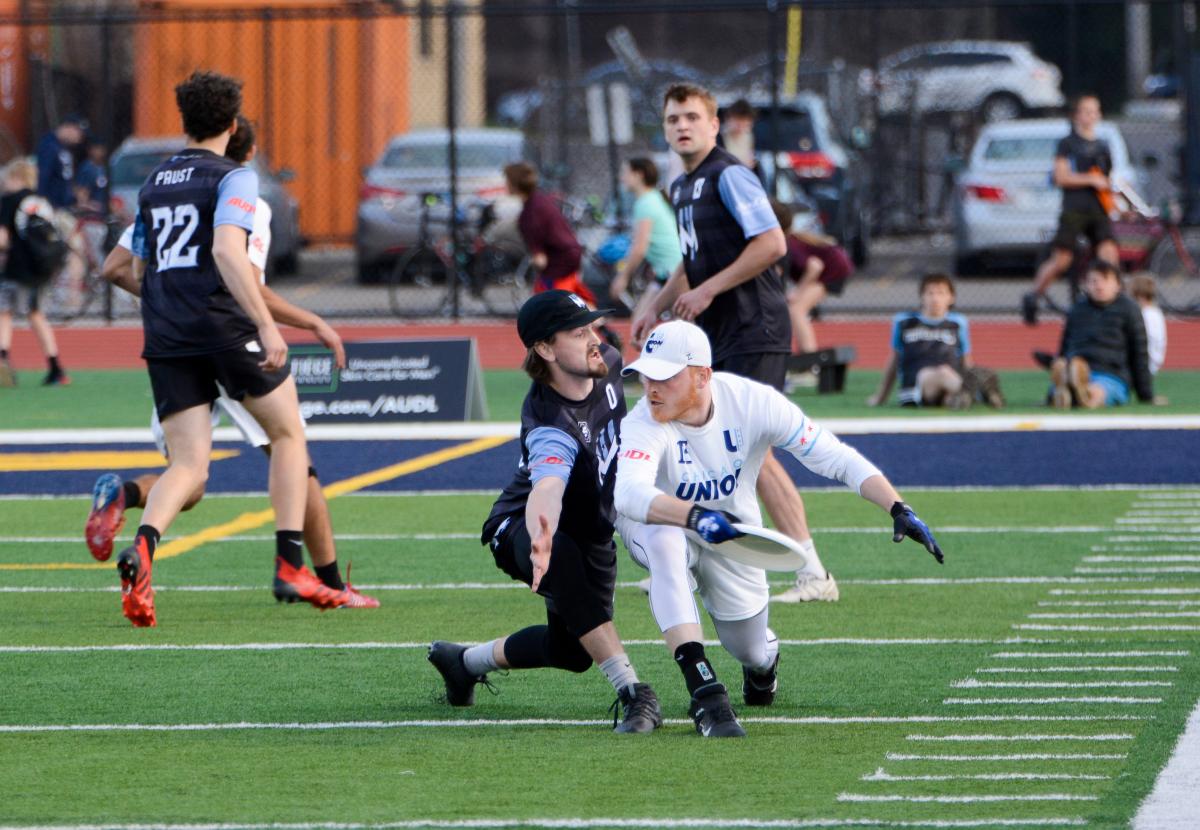 Throughout Chicago’s Week 1 victory over Pittsburgh, Union O-line personnel frequently came off the field saying how easy it was playing offense alongside Kaminsky, who had made the switch after working almost exclusively with the D-line in 2021. The choice to transition him onto the offense continued to pay off in Week 2 against Minnesota, as the 25-year-old handler finished plus-nine in Chicago’s road victory, an especially impressive feat considering he completed all 20 of his passes amidst the wildly windy conditions. Kaminsky caught five goals, dished four assists, and also recorded one block in the Union’s 24-21 triumph. His goals, assists, and plus/minus were all easily career bests.

Although his team ultimately fell short in double overtime on Sunday night, Lee authored one scintillating sequence late in the game when he recorded three spectacular blocks on one particular point. It was early in the fourth quarter and his Nitro were down 20-18 when he denied two deep shots and an underneath pass to thwart three separate break opportunities for Colorado. It was slightly reminiscent of Ben Green’s thrilling two-block, goal-scoring point in DC’s game at Atlanta last year. Lee finished the game with four blocks, along with three goals, one assist, and no turnovers. Through two weeks of the season, Lee ranks third in the league in plus/minus at +18, and he’s the only player in the AUDL among the top 25 in plus/minus who also has a 100 percent completion rate.

The former AUDL MVP was not perfect in his Colorado debut, but his anchoring presence, big throws, and clutch resets were massively important as the Summit earned impressive road wins in Seattle and Portland. On Sunday night, in particular, Nethercutt tormented the Nitro with nine assists, two goals, and one block, while throwing for 697 yards, 151 more than anyone else in the game. He also delivered the winning put in double OT, dishing 18 yards to Mathieu Agee for the game-sealing score after a whirlwind universe point that included three total turns.

It was a heck of a homecoming for North, who totaled 714 yards and nine scores in Indy’s lopsided season-opening victory over Detroit. Following one season with Chicago, North returned to the AlleyCats O-line—and their indoor, wind-free home environment—and looked like he had never left, accumulating 376 throwing yards and 338 receiving yards on just 16 completions, with three goals and six assists. The defensive resistance against North and the ‘Cats will be much stiffer moving forward, especially with Madison coming to town this Saturday, but Indy’s offense sure looked crisp to start the season; the AlleyCats were only broken once in just five opportunities against the Mechanix.

Considering he only played sparingly for Dallas in 2021, Dalton’s debut for Chicago on Saturday was a refreshing reminder just how clutch and valuable he can be in any number of roles. Smith played 16 of his 18 points for the D-line against the Wind Chill and anchored several upwind possessions to surge the Union into the lead. Overall, he completed all 31 of his throws, with two assists, one goal, and three blocks. His upwind hucks were game-changers, and his calming presence was critical in Chicago sneaking away from Minnesota with the W.

Are we simply honoring Rhys for his excellent surname? Of course not. But amidst a number of other solid candidates across the league, elevating one of the league’s coolest monikers seemed like the right choice. Unquestionably, his emergence on the field made him worthy for this honor too. Whereas his plus/minus for the 2021 season was plus-four (in six games), Toogood registered a plus-five in Ottawa’s Friday night victory over Boston. The 24-year-old completed all 31 of his throws, while dishing three assists, scoring one goal, and earning one block in the Outlaws’ 21-19 triumph. The former Team Canada Junior Worlds competitor is poised for a big year on an Ottawa team that has a chance to start 2-0 for the second consecutive year when it visits Toronto this weekend. Aside from last year’s Canada Cup experience, the Outlaws had never before started a season 1-0.

In a low-scoring struggle against Philly, Williams’ flawless ultimate certainly stood out. Every point was a grind, and the Empire star solidly completed all 28 of his throws while recording two goals, four assists, and three blocks for a plus-nine that was four clear of the next best in the game. Jack’s plus-nine was the second-highest of his 58-game AUDL career, and the best since he produced a six-goal, six-assist, one-block, one-turn plus-12 against Atlanta nearly six years ago, on July 1, 2016. His three blocks against the Phoenix also tied his career-high. The Empire will seek a 3-0 start when they venture to Boston this Saturday in the Fox Sports Game of the Week.