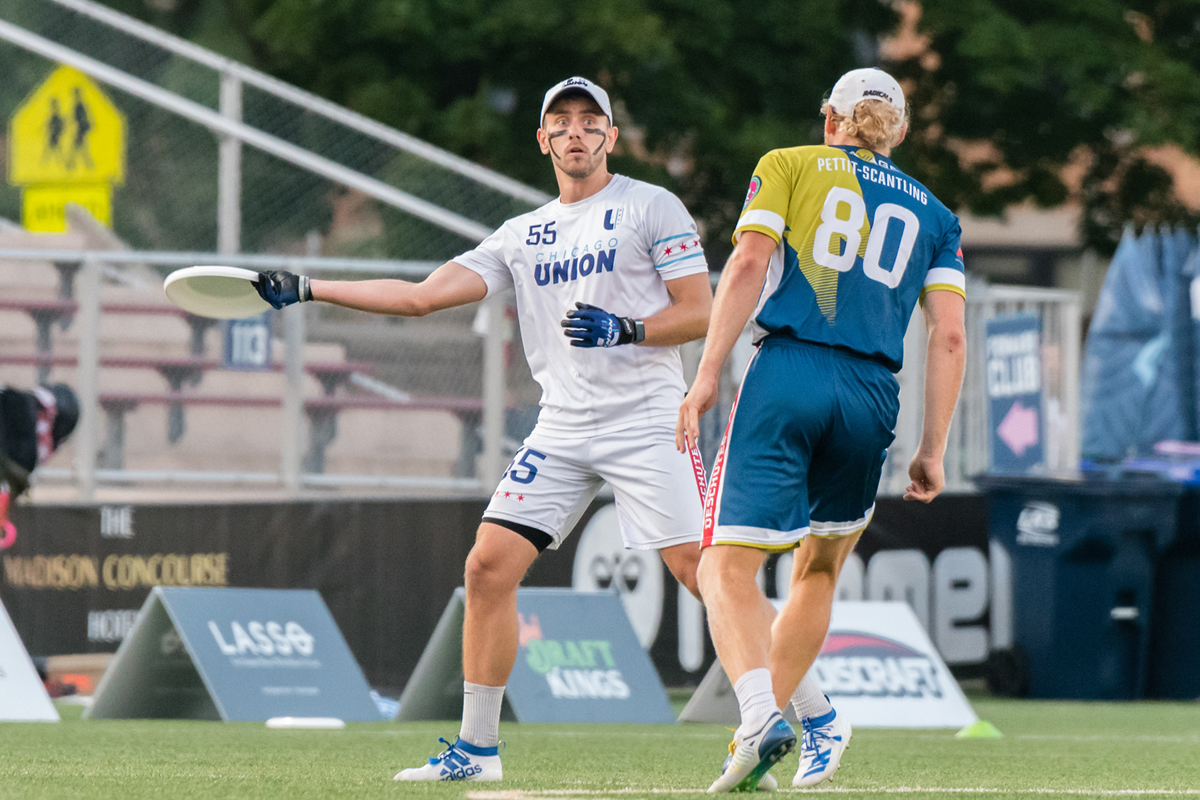 The Madison Radicals fight for their playoff lives tonight at home, as the Chicago Union head to Breese Stevens Field for the first time this season. The Union defeated the Radicals 22-21 in their first meeting in Week 7. 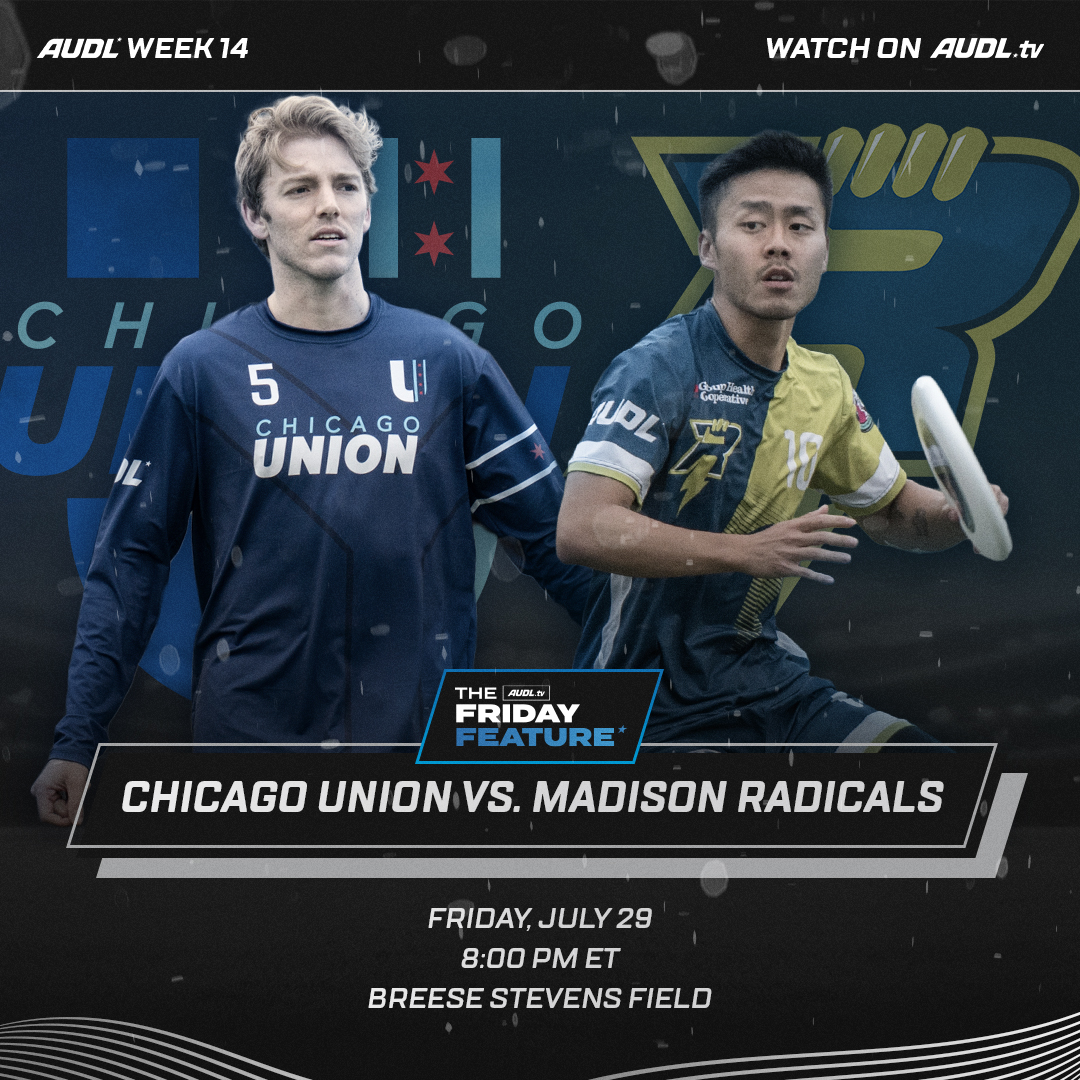 Chicago’s offense couldn’t be stopped last time these teams met, converting a season-best 19-of-24 O-line possessions (79 percent) of their O-line possessions. For the season they’re converting at a 63.8 percent rate, nearly matching their record-setting efficiency from last year (64.6 percent) despite averaging an additional two hucks per game; the offense has gotten more aggressive with their deep shots, trusting their continuation throwers to take pressure off the backfield.

Union captain Ross Barker, who battles his former team this week, has played a featured role in this continuation-based system. Barker leads the team with 15 completed hucks this season compared to just three last year, and he’s been complemented well downfield by Jeff Weis and Jack Shanahan, two guys that have combined for 29 assists and 54 goals this year. Ranking top 10 in the league in receiving yards per game, Weis has easily been the offense’s top downfield option, with his box-out and in-air ability in the deep space presenting a constant problem for opposing defenses, not to mention his range as a thrower following big gainers underneath. Weis threw the game-winning huck to Barker to defeat the Radicals in Week 7.

Historically, the Radicals defense has done a good job disrupting Chicago, throwing a mix of zone and matchup-based defenses to take Chicago out of their comfort zone. No defense forces their opponents to complete more throws per game this season than Madison’s, which is a big contributor to their lower-scoring games; the average Radicals game sees a total of 39 goals between the two teams, third fewest in the league.

Madison will be short a few starting defenders this week in Jake Rubin-Miller, Kelsen Alexander, and Andrew Meshnick, but they will have Kevin Pettit-Scantling active despite suffering an apparent injury earlier this week. The trio of KPS, rookie Matt Tucker, and third-year Radical Luke Marks have combined for 32 blocks this season and will look to find ways to force Chicago’s offense out of rhythm; Madison’s D-line recorded just four blocks in their first meeting of the season, though they were able to take full advantage of turnovers, converting 4-of-5 break opportunities.

Working in the Radicals favor is a few key absences on the Union O-line. Eli Artemakis, Paul Arters, and Kyle Rutledge are all inactive tonight, potentially leaving some holes in the usually potent Union attack. Center handler Pawel Janas and backfield complement Sam Kaminsky will still handle the bulk of the touches, but without some of those midfield pieces, Madison may be able to take advantage of a less-connected system.

The absences continue on the defensive side, as Chicago will also be without their trio of D-line quarterbacks in Tim Schoch, Dalton Smith, and Joe White. Chicago’s inefficiency on the D-line counterattack was a big reason why the last game with Madison was so tight; they converted just 3-of-13 opportunities (23 percent), their lowest rate of the season. The D-line does return Nate Goff, who has missed the last three games because he was busy winning a gold medal for the US or something, and he should have plenty of opportunities to make plays against a Radicals offense that has struggled to find much consistency this year.

Victor Luo, who leads the team in scores, completions, and yardage, will miss tonight’s game, putting added pressure on second-year handler Henry Goldenberg to run the backfield. Goldenberg completed all 21 of his throws against Chicago and his coming off another turnover-free performance against Detroit, in which he also recorded five scores. Whether he can stay in rhythm and limit turnovers tonight—he’s had four-plus turnovers in half his games this year—will directly impact Madison’s chances of keeping themselves in this game. 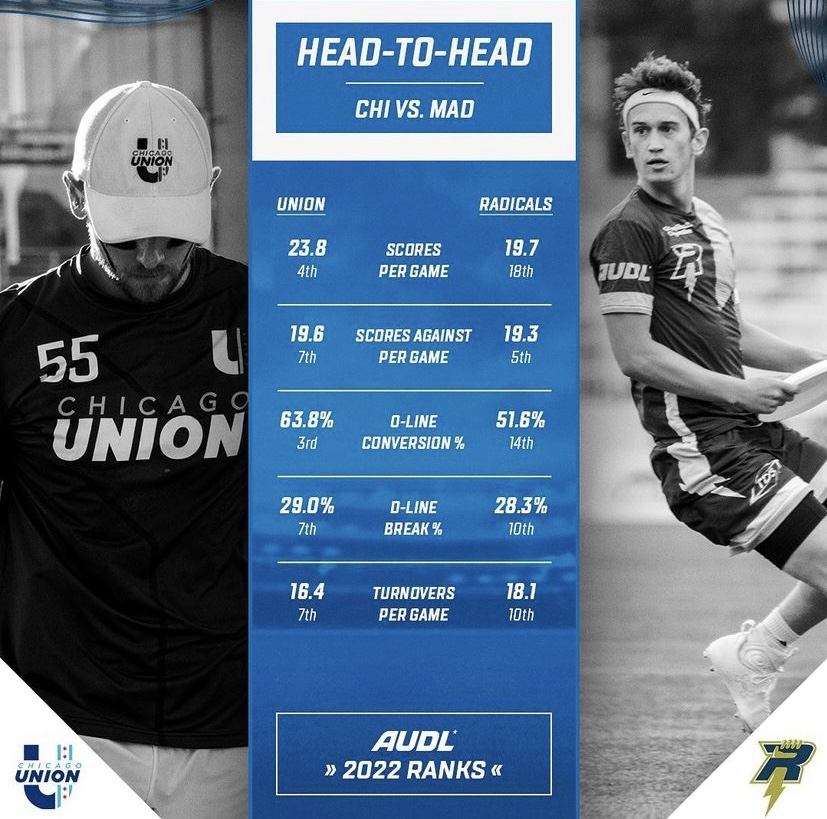 With a win, the Radicals would be one AlleyCats loss away (they play Atlanta tomorrow) from making the playoffs for the first time since 2018. A low-scoring game gives Madison their best chance; if the defense can find ways to take advantage of Chicago’s absences and slow down the depleted O-line, they’ll keep this game within striking distance and put themselves in position to make a late run.