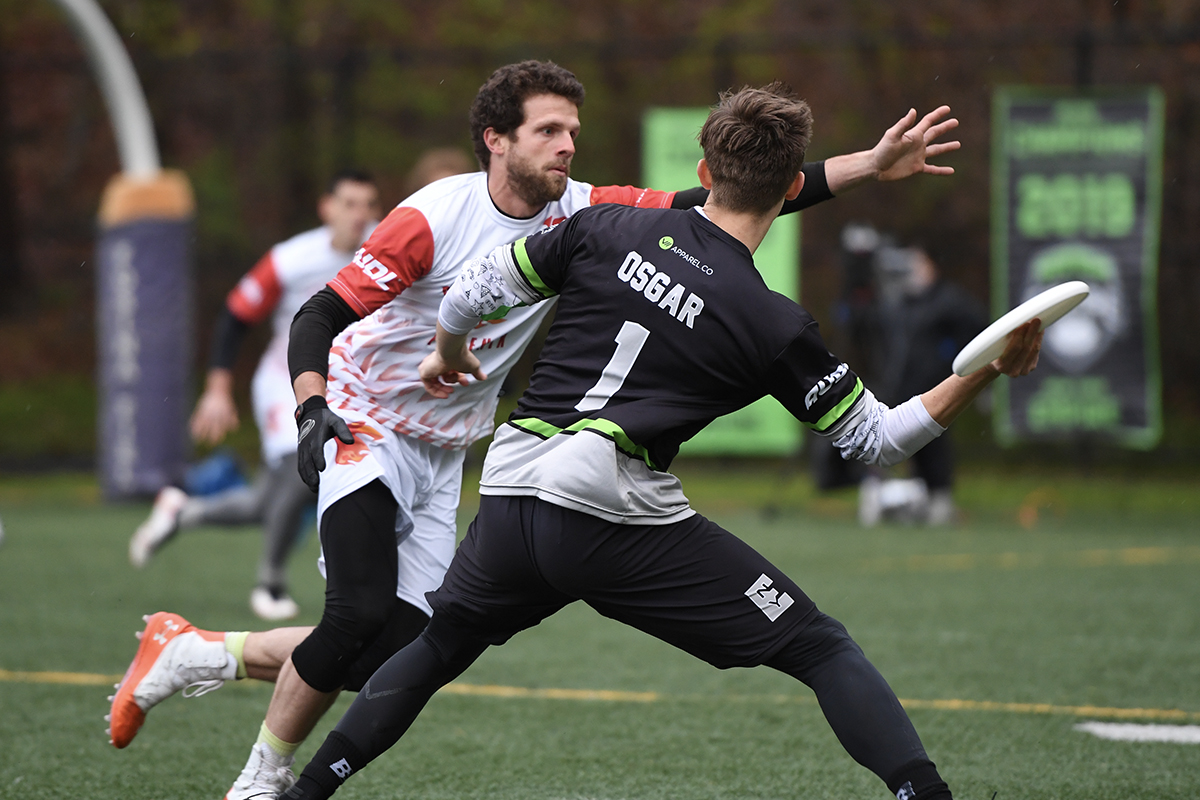 The New York Empire are one win away from becoming the first team in AUDL history to finish with multiple undefeated regular seasons, as they head to Philly tonight to take on the Philadelphia Phoenix. Both teams are locked into their current playoff seeds, with New York carrying a first round bye into the postseason while the Phoenix clinched the three seed last week. 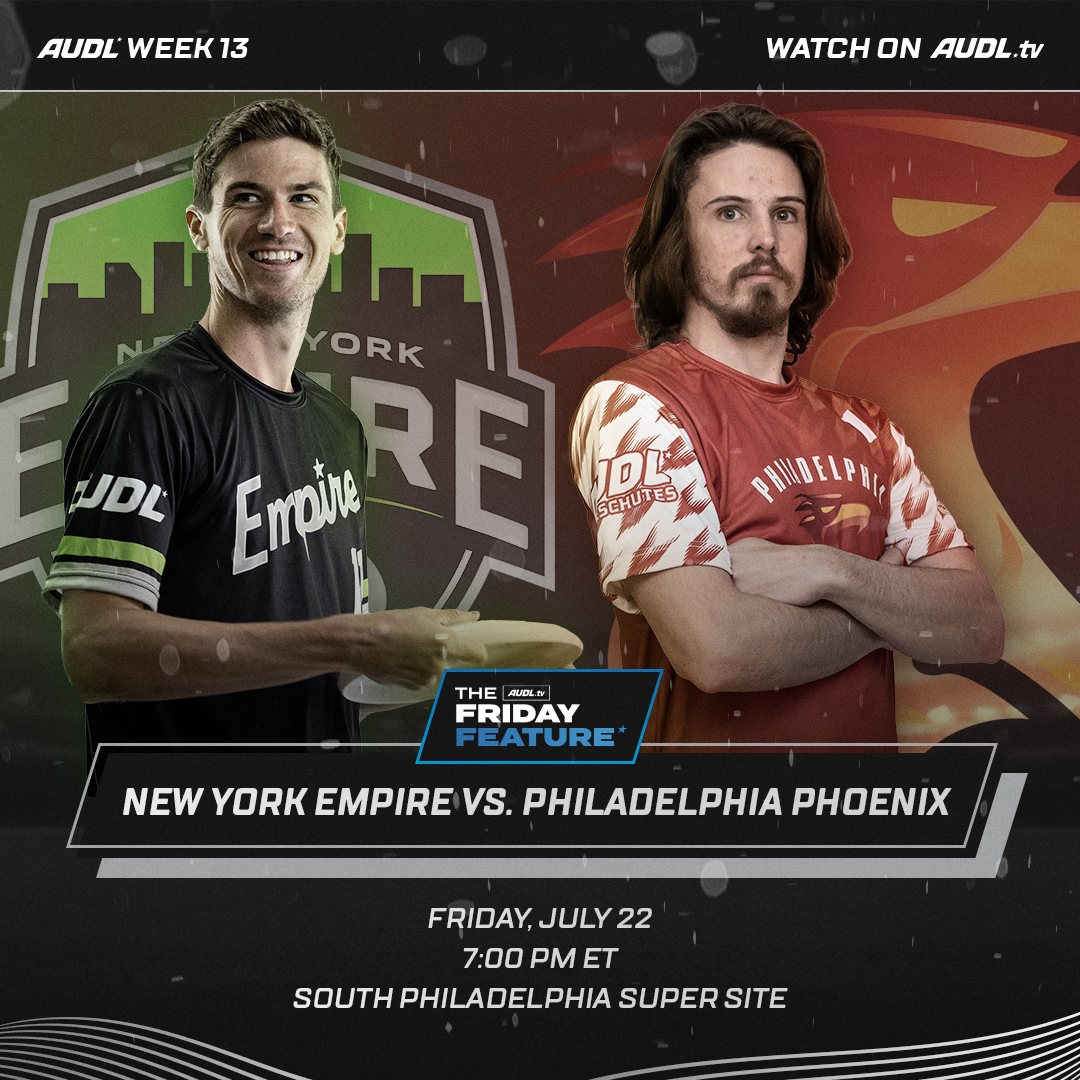 Of their 11 wins this season, New York’s least decisive victory came in Week 2 when they hosted the Phoenix. A somewhat sloppy game played in suboptimal conditions, the Empire finished with a season-high 22 turnovers—the only time they’ve had 20-plus this season—and narrowly escaped with a 17-15 win. The D-line struggled to convert breaks throughout the game, managing to punch in just 3-of-16 opportunities (19 percent).

Aside from that Week 2 game, the Empire D-line has converted 50 percent or better in every game this season, and they’re coming off their most dominant performance of the year having converted 16-of-18 breaks (89 percent) two weeks ago against Boston. Since the team switched two-time reigning MVP Ben Jagt over to defense at the start of June, the D-line has converted 67 percent of their possessions and have held opponents to an average of 15.2 scores per game. The midseason move has had little effect on the O-line, which continues to convert at a rate nearly five percentage points higher than the best offense in AUDL history prior to this season.

While Jagt switched to D, 2021 All-Defense Team selection Jeff Babbitt switched to offense this year and has been unstoppable as a downfield receiver. Babbitt scored a season-high eight goals in New York’s last game against Boston and currently sits in fifth place among the league’s goal scoring leaders. Working alongside fellow big John Lithio, the duo has provided near-automatic targets for Ryan Osgar, who is three assists away from topping his franchise record 59 regular season assists that he set a year ago. Osgar’s increased usage this season has him playing at a career level of efficiency, while he’s remained deadly as ever with the disc in his hands; he’s 16-of-17 on hucks this season and has recorded at least six assists in seven games.

There’s nothing easy about containing the Empire attack, but the Phoenix made them work in Week 2. Philly’s opponents are averaging just over 20 turnovers per game, eighth most in the league, and the bulk of those turnovers have been takeaways by the Phoenix defense; they average 11 blocks per game, sixth most in the league. These blocks are coming on both sides of the disc, as the O-line defense led by James Pollard and Sean Mott deserves plenty of credit for New York’s counterattack struggles in Week 2.

While their offensive ability has been on display all season, Pollard and Mott have also combined for 19 blocks in 2022 and each came away with two blocks in round one vs. New York. If you had to pick a potentially exploitable weakness, the Empire D-line offense is expected to be without John Randolph and Jibran Mieser this week, so if they have to lean more heavily on the higher risk, higher reward duo of Jagt and Antoine Davis to lead the counterattack, Philly could find themselves with more opportunities to earn the disc back.

Offensively speaking, the glaring absence for the Phoenix O-line this week is Jordan Rhyne, who has quarterbacked this team to a 5-3 record in games in which he’s been active. His absence likely means more involvement for second-year Phoenix handler Alex Thorne, who had his highest usage game of the season against New York, which Rhyne also missed. Rhyne has been the defining piece of Philly’s second-leading deep attack, so the downfield shots may be more distributed this week between Thorne, Mott and Pollard. The weather made it tough to create big plays in their last meeting, as the Phoenix connected on a season low five throws of 40-plus yards compared to their season average of just under 10 per game. This offense is at its best when it can find the Osgar-like balance of maintaining aggressiveness without forcing it, and they’ll likely need one of their strongest showings of the season to keep this game within striking distance.

When it comes to all-around efficiency, Philadelphia really doesn’t come close to what New York has accomplished this season. But the Phoenix have established themselves as a team that will find a way to play up to their opponent’s level, regardless of that opponent’s ‘on paper’ advantage; their five losses this season include four one-goal losses and the one two-goal loss to New York. Whether tonight is a statement win for New York or the upset of the year by Philly, both teams have a chance to establish significant momentum heading into the playoffs.