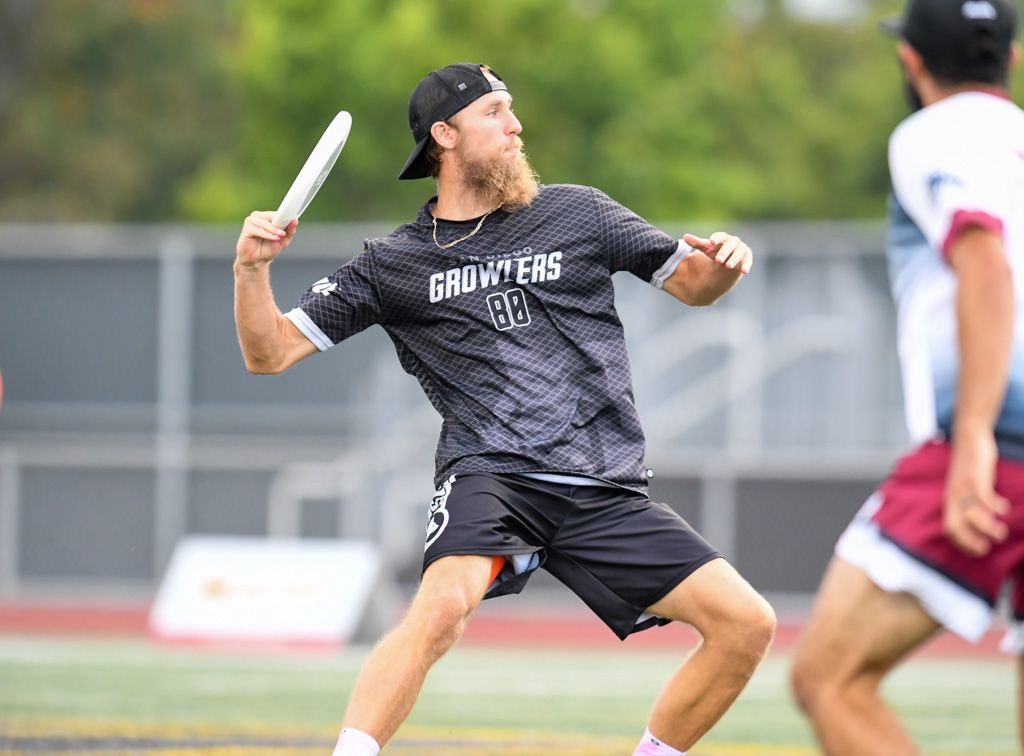 Playing in just his third game of the season, Arters continued to illustrate how big of a difference-maker he can be when he’s on the field. On Saturday against the Wind Chill, Arters tossed seven assists and 413 throwing yards, both game-highs, while also scoring three goals and completing 33 passes without a throwaway. Jeff Weis, Ross Barker, and Pawel Janas all had standout performances too, but Arters’ presence returned a dynamic to the Union offense that had been missing for much of the season. Despite the considerable Minnesota preseason buzz, there’s no question now that Chicago deserves to be seen as the Central Division favorite heading into the playoffs.

Can the AUDL’s all-time goal-scoring king somehow still quietly have a brilliant season that doesn’t get enough hype? Perhaps that’s my fault, but I think it’s true! With just two weeks left in the regular season, Brock isn’t just top five or top 10 in goals per game. He’s literally number one in the entire league, averaging 4.7 goals per game, better than anyone else across the continent! Friday night at Madison was one of his best games of the summer, scoring seven goals and dishing one assist in a turnover-free effort amidst a massive AlleyCats road victory. It was the fourth time this year that Brock’s scored at least seven goals in a game, showcasing how even at age 33 and in his 10th AUDL season, the king’s still the king.

Speaking of vintage performances from AUDL veterans, the 31-year-old Dunn reminded everyone in the West that San Diego is capable of beating anyone at its best. The Growlers played by far their best game of the season on Friday against the previously undefeated Colorado Summit, combining a season-low 11 turns with a season-best 96 percent completion rate into a 23-20 victory. Along with Paul Lally, who went 70-for-71 with 690 total yards, Dunn helped anchor the San Diego offense with eight assists, three goals, and 554 total yards. Dunn has now thrown 27 assists in his last four games after tossing just 10 assists in his first four games this year.

Behind a season-high nine assists and 348 throwing yards, Evans guided Austin over Dallas for the fifth straight time on Saturday night, easily the Sol’s longest winning streak against their long-time big brothers to the north. The victory kept Austin in control of the South’s second and final playoff spot, with just one more home game to play against winless Tampa. In addition to the prolific passing numbers, Evans also chewed up 275 receiving yards, scored a goal, and recorded a block in the victory over the Legion. Jake Radack added eight assists and 562 throwing yards for the Sol, bringing them within one win of a 9-3 season and an August postseason date with Carolina.

The stat sheet doesn’t always tell the full story, but sometimes it’s impossible to ignore. Despite the Summit losing their perfect season on Friday in San Diego, they did escape SoCal with a Saturday victory over Los Angeles, and Finer returned to the Rockies with over 1,000 receiving yards, over 350 throwing yards, a dozen goals and no turns across the two games. Overall, Finer produced 675 total yards on Friday and 738 on Saturday, scoring six goals with no throwaways in both games. He completed all 62 of his passes on the weekend, with three assists and 11 hockey assists. It’s hard to recall a more prolific and blemish-free doubleheader weekend in recent memory than what Finer put together in Week 12, which also officially clinched the number one seed in the West for the Summit.

The Thunderbirds D-line failed to put up much resistance, and Mitchell was one of many Flyers who enjoyed huge offensive nights up in the Steel City. Terrence produced 612 total yards, with seven goals, three assists, and no turns, the first time in his 98-game career that he finished with a double-digit plus/minus (+10). If not for Mitchell’s milestone, many other Flyers could also be featured in this spot, including Alex Davis, who caught eight goals, Eric Taylor, who dished seven assists, or Matt Gouchoe-Hanas, who completed all 65 of his throws on the road at Pittsburgh.

Mott deserves recognition for the eight assists, one goal, one block, and 399 throwing yards he produced on the road at Toronto on Saturday night, but that’s not why he was an Honor Roll lock this week. Rather, this is a tribute to Mott’s longevity and perseverance. He’s averaged nearly 12 games per season since joining the league in 2014, and most of those games have ended in defeat. But Mott’s kept grinding, with a resilient spirit and improving set of skills that helped finally lift the Phoenix into the playoff conversation. Saturday’s win at Toronto officially guaranteed that Mott would experience the AUDL playoffs for the first time in his seven-year career. Presently, no one in AUDL history has played in more games than Mott without any postseason opportunities. That changes in August, when the Phoenix will travel to DC to battle the Breeze.