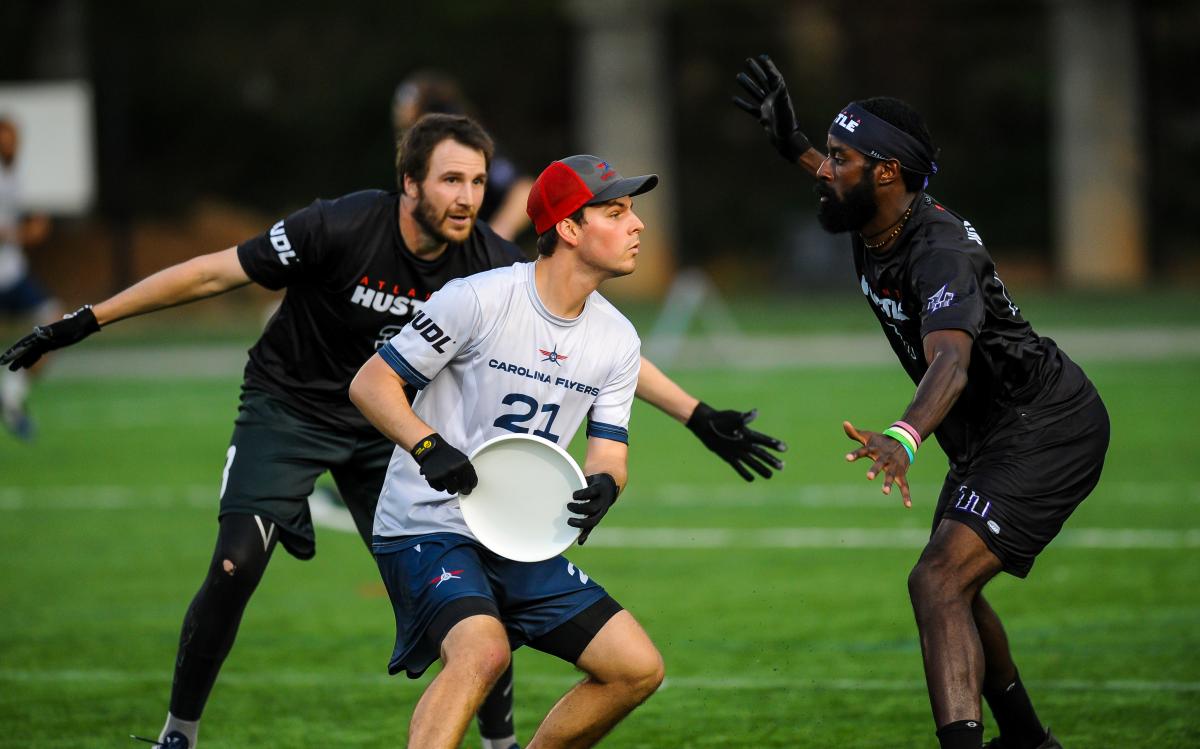 The first place Carolina Flyers will host divisional rivals the Atlanta Hustle in the third meeting between these two championship-level teams this season. The Flyers have won the previous two encounters and the season series, but Atlanta needs a win on Saturday night to avoid being displaced from second place in a two-seed playoff race in the South Division. 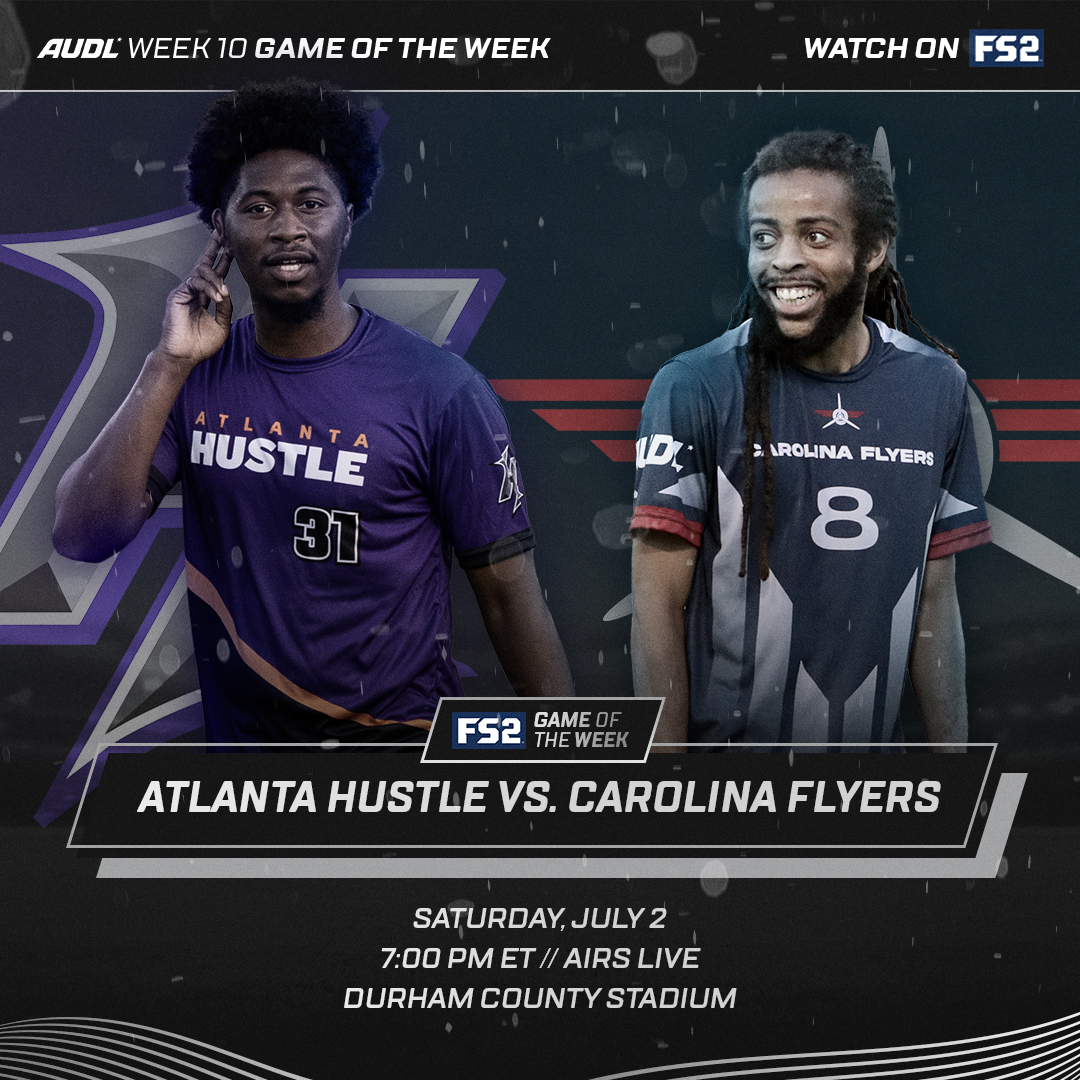 The Flyers played the Hustle in Atlanta just two weeks ago, with Carolina using defensive pressure and a flurry of second half breaks to take the lead on the way to winning 22-18. 11 different Flyers players finished with a block against the Hustle, and the D-line had its most efficient game of the season, converting 8-of-9 possessions into break scores. As good as they’ve been in coverage, Elijah Long, Seth Weaver, and Suraj Madiraju have been standout for their roles as the primary distributors on the Carolina counterattack. The trio have completed a super efficient 335-of-349 (95.9 percent) of their throws combined this season, and the Flyers D-line has overwhelmed opponents in transition; Carolina converts 55.8 percent of their D-line possessions into scores, the third highest rate in the league.

The Flyers low turnover rate as a team—Carolina is tied for first in the league for fewest turnovers per game at 13.3—combined with their D-line’s ability to convert breaks has had a compounding effect on opponents over the course of a game. And other than their opening night two-goal win against Atlanta and their Week 6 one-goal loss to Austin, Carolina has won their remaining seven games by four or more goals.

Sol Yanuck and Matt Gouchoe-Hanas continue to be the best and most dynamic one-two handler combination in the league. Yanuck leads the team in completions, throwing yards, and huck completions through the team’s first nine games, using a full toolkit of throws and some of the best field vision in the league to constantly put Carolina in a position to attack on offense. Meanwhile Gouchoe-Hanas is having a historically efficient throwing season, committing one throwaway in his first 344 throws, and looking forever cool-calm-collected with the disc, no matter the situation; Gouchoe-Hanas was 82-for-82 against the Hustle in Week 8, anchoring the Flyers throughout the night against the Atlanta zone. Individually, either thrower could be the QB1 for a championship team. But together they provide an unmatched level of synchronicity and talent that has been the bedrock for the Flyers’ offensive successes the past two seasons; Carolina is second in offensive efficiency for the second straight year. 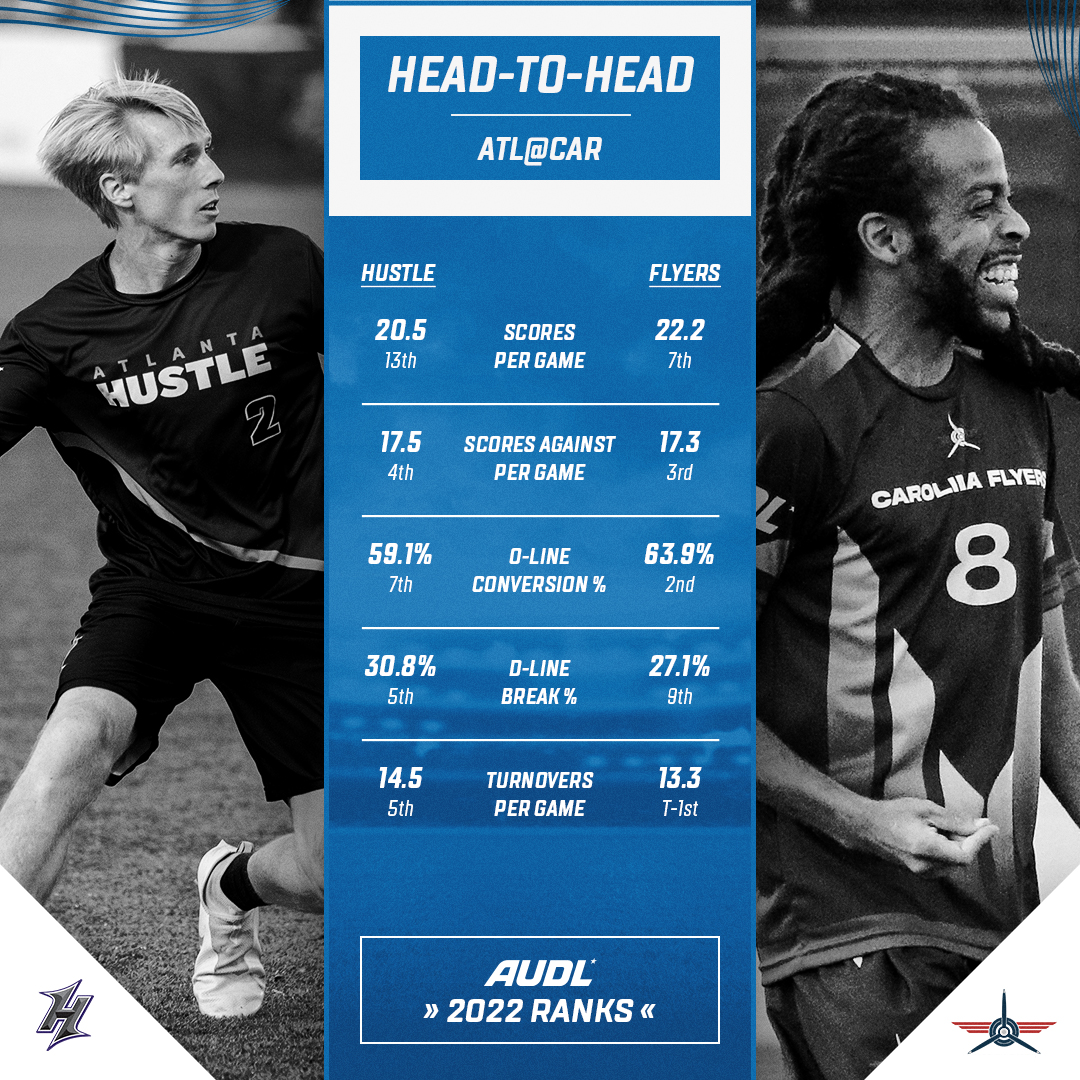 But they don’t have bad targets, either. Alex Davis leads the league in goals. Jacob Fairfax and Henry Fisher both finished with more than 300 receiving yards in their last meeting with the Hustle. And Terrence Mitchell is playing some of the best all-around ultimate of his career in his seventh season.

But for as precise and balanced as the Flyers offense can be, the Hustle found an ability to slow them down in their last matchup using zone defensive schemes. Atlanta finished with just six total blocks, but the Hustle limited the Flyers to 15-of-28 (54 percent) on their O-line possessions, tying a Carolina season-low and registering well below their 63.9 conversion rate for the season. Matthew Knowles and Michael Fairley are usually responsible for setting the mark and constricting the point of attack for opponents, but both players will be absent for tonight’s game; the Hustle will have to find new pieces for their defensive frontline in the zone, and could use Kelvin Williams and his length to influence Carolina throwers. Brett Hulsmeyer and Dean Ramsey have both been big presences in deep space for Atlanta, with Ramsey collecting four blocks in his first two games against the Flyers in 2022.

The Hustle offense continues to center around the play of Austin Taylor, who has shifted into more of an upfield striker role after performing at an MVP level in the backfield last season. In the last game between Atlanta and Carolina, Taylor finished with a game high 438 throwing yards and was second in receiving yards with 324; Taylor continually shimmied open as the initiating receiver on Hustle O-line possessions, while also performing as the primary quarterback once with the disc. Christian Olsen’s ability to play alongside Bobby Ley in the backfield has allowed Taylor more freedom to move, and the Hustle are figuring out more and more how to use Draco as a queen piece on their board.

The third place Austil Sol are sitting at 5-3 and face a Dallas team tonight they’ve already beaten three times this season, so the 4-2 Hustle cannot afford another misstep against the Flyers in order to maintain second place in the division. And despite playing efficiently, the Hustle have scored just 32 goals in their first two games against Carolina this season. Tonight could see more offensive fireworks, which would be appropriate for the weekend.