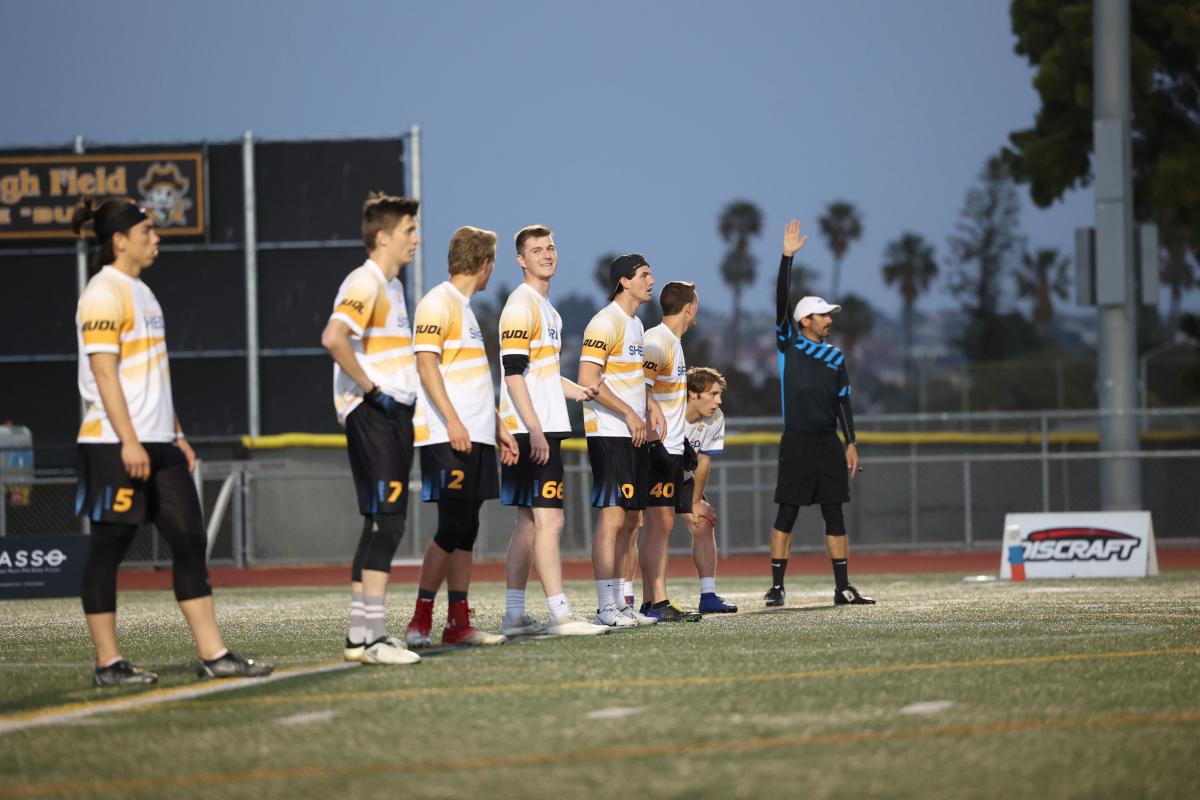 Throughout his career, it’s become apparent that Davis is eminently capable of handling a major role as an O-line cutter and initiator, however the responsibilities he’s taken on with his new team feel like the perfect fit for the 28-year-old speed demon. In his Empire debut on Saturday night in DC, Davis’s defense helped set the tone and seal the deal. Early in the second quarter, after the two teams combined for 11 straight turnover-free points to start the game, Davis denied a Tyler Monroe cross-field swing for the block and then launched a perfect 45-yard flick to Jeff Babbitt for the Empire’s only first-half break. Later, with less than five minutes left in the fourth, Davis launched his body full extension to athletically swat Monroe’s dish intended for Alan Kolick in the end zone. Both offenses were excellent for much of the night, and Davis’s defense might have been the biggest difference-maker in New York’s 22-19 triumph.

Starting his second professional season, Davis-Brand delivered a huge performance working alongside All-League teammate Ben Sadok in Boston’s narrow victory over Philadelphia on Saturday night. The 21-year-old erupted for 423 throwing yards (previous high: 267) and 343 receiving yards (previous high: 198) while completing all 44 of his throws in the Glory’s one-goal win. He also had the assist or hockey assist on more than half of his team’s scores, helping the Boston offense to an O-line hold rate that ranked third-best in the league on opening weekend.

The easiest choice for the Week 1 Honor Roll, Kerr and the Shred  emphatically announced themselves as All-AUDL and Championship Weekend contenders, respectively, with their improbable two-game sweep through SoCal. The highly-skilled lefty dished 16 assists, scored four goals, recorded two blocks, and churned for over 1,000 yards across the two wins, including a remarkable Friday night performance against the two-time defending West Division champs where he absolutely shredded the San Diego defense for three goals, nine assists, and 417 throwing yards. There were plenty of other standout performances among Kerr’s Salt Lake teammates, but Kerr’s experience, confidence, and precision surely set the tone for the only team to earn multiple wins on opening weekend.

With nine assists, six hockey assists, two goals, two blocks, 496 total yards, and no throwaways, Marx played something close to a perfect game as the Nitro also earned a victory in their franchise’s inaugural contest. Granted, Marx did register one garbage-time drop, and the second half of Sunday’s battle featured inconsistent levels of defense, but 25-year-old University of Oregon product confirmed that he would be a problem for opponents during his debut season. While Salt Lake will deservedly get the headlines as the expansion team that went 2-0 on the road, Portland also looked immediately ready to contend as a first-year franchise on opening weekend.

It’s often tough to isolate individuals on the Flyers, who might exude the profile of balanced team excellence more than any other franchise in the league, but McCutcheon’s defense did stand out in his Carolina debut. This award could probably also be bestowed to another former Minnesota Wind Chill product named Charles that attended the University of Delaware, as Charles Weinberg also fit in brilliantly in his first game with New York. But too often clutch defense gets overlooked, and McCutcheon’s all-night-long effort paid off in the fourth quarter, with his bookends break serving as the virtual nail in Atlanta’s coffin with 3:13 remaining. McCutcheon finished with two blocks and two goals in Carolina’s 16-14 victory.

It’s absolutely unheard of for a guy with four throwaways on a losing team to earn a spot on the Honor Roll, but Miller could potentially reach a bunch of unprecedented milestones during his ultimate career. Just eight days after his 18th birthday, the highly-touted teenager made history during his AUDL debut, becoming the first player to record a 400/400 game, with 443 throwing yards and 416 receiving yards. Complete yardage stats have only been kept across the AUDL since Championship Weekend in 2019, but the closest to reach the 400/400 mark previously was New York’s Grant Lindsley, who registered 391 throwing and 398 receiving in the Empire’s 2019 title game against Dallas. Certainly, Miller’s game will mature as he continues to grow and understand the speed and athleticism at the pro level, but if his debut was any indication, the Cascades have a potential superstar in the making.

No one across the league threw more passes without a turnover than Philly’s Rhyne, who went 70-for-70 and accumulated 605 throwing yards in his Phoenix debut. He also had seven assists, four hockey assists, and completed all five of his hucks in Saturday’s shootout in Boston. While Philadelphia ultimately fell short, losing 25-24, the Phoenix only had 13 turnovers in 48 minutes, fewer than any of their games a season ago. With 836 total yards, Rhyne chewed up more field with his throws and catches than any other turnover-free competitor all weekend.