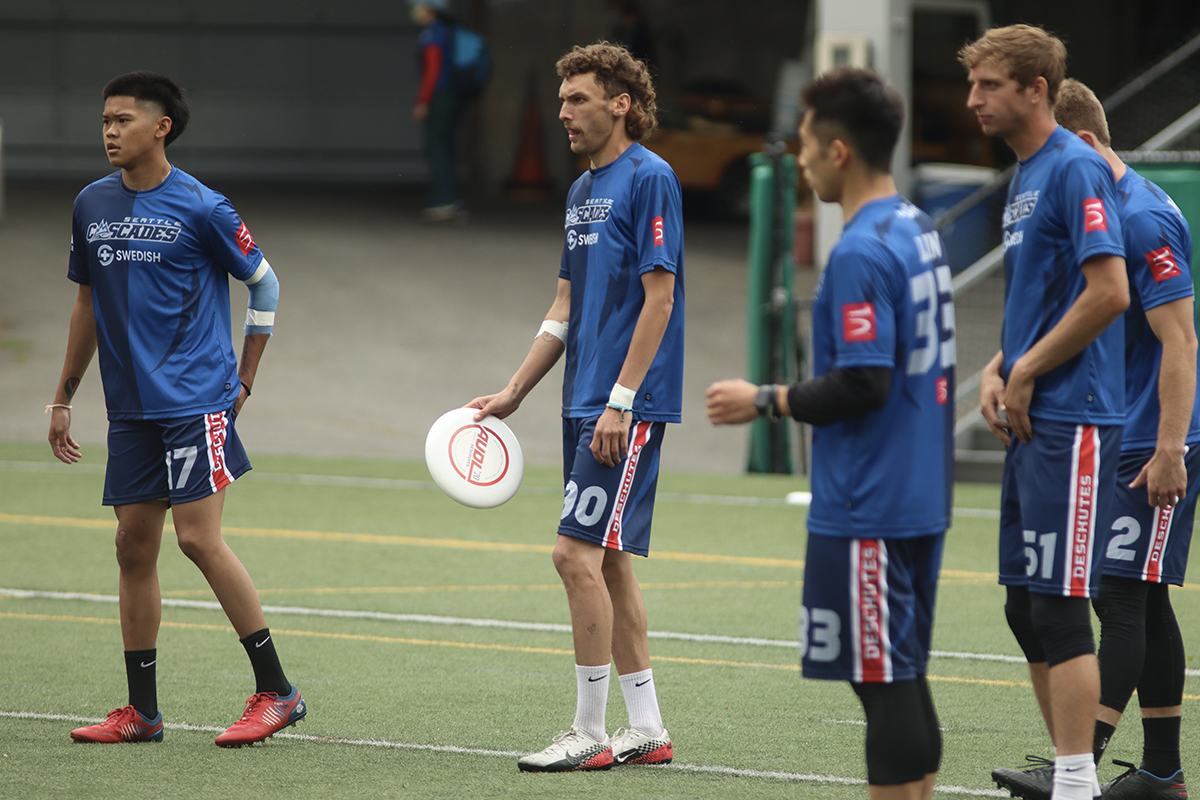 While it wasn’t always reflected in the final score, the Seattle Cascades’ D-line was one of the punchiest in the league when it came to their counterattack. The group found their identity early last season by forcing turnovers and immediately following them up with fast-break conversions.

The Cascades took full advantage of their break chances by attacking the opposing O-line when they were at their weakest—right after the turnover. Offenses are already less comfortable playing defense, especially when the turnover is unexpected, so turnovers create these brief moments of chaos where the O-line has to find their matchups and switch their mindsets from attacking to defending. A player may sulk after forcing a bad throw, a cutter might have their momentum going the wrong way, a player could be lying on the ground after attempting a layout; all these things prevent quick transitions to defense. So the Cascades D-line blitzes.

When the turnover happens on an underneath cut or in the backfield, the D-line gains a further advantage. Teams typically have just two or three handlers back, so on turnovers closer to the backfield, those handlers become the only players able to defend the fast break. In the below example, Shane Worthington jumps a throwing lane from his bracketing zone position in the middle of the field, looking to take away those underneath cuts. When he catches the disc, watch the two Cascades defenders in front of him take off deep, pulling the two Dallas handlers into the end zone. While they both draw coverage, Dom Jacobs, a guy who loves running off these turnovers, sprints from behind Worthington all the way to the far side of the end zone, where there is no one left to defend the deep cut. Worthington bends an outside-in flick to the wide open Jacobs, and it takes just one throw for the Cascades to score after forcing the turnover.

This mindset of flooding the deep space facilitates open hucks for the Cascades D-line. And when you have the speed on the field that Seattle often does, one of the cutters is bound to find open space on an outnumbered O-line in transition.

The overall chemistry of the D-line, knowing they’re collectively looking for these fast-break opportunities, regularly puts them in position to strike quickly. In the below example, Jack Brown gets the block on a big crossfield hammer, and immediately three Cascades players are off running downfield. They’re maintaining horizontal spacing, and as Brown settles into the upline space to receive a huck, Garrett Martin is following it up to ensure no one is holding the disc for more than a couple seconds. Every player out there is hustling, determined to keep the defense off-balance, and it’s ultimately a cut that comes from behind Martin to punch in the Cascades break.

The Cascades were among the best in the league in 2021 at exploiting these offense-to-defense transitions, and the strategy was easily deployed by their young, energized group of D-liners. Fast-break scores played a huge part in Seattle’s wins over both Austin and Dallas last season, as the Cascades demonstrated a consistent ability to ride the break momentum and change the trajectory of any game.