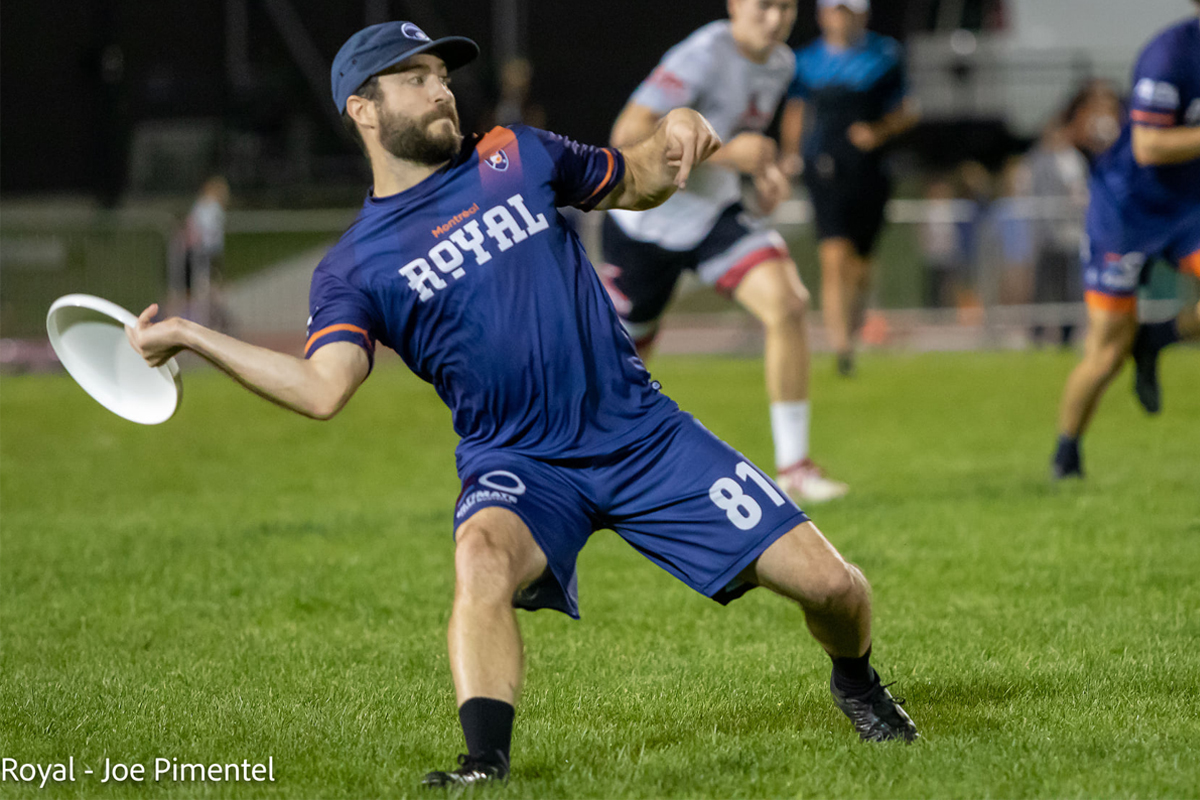 The Montreal Royal ascended to the top of the Canada Cup standings in 2021 with a high-powered offense that featured a talented lineup of throwers, many of which often looked for the big play. One thing they all had in common was consistently looking crossfield to attack open space on the break side.

The force-side space can often clog with consecutive cuts and defenders drifting towards that side of the field. For throwers that can break their mark, these situations can leave a ton of space open on the opposite side of the field, where the disc can be thrown out to space to lead a cutter crossfield. These throws often come in the form of over-the-top throws such as hammers and scoobers, or big “around” throws like outside-in forehands and backhands.

Kevin Quinlan has some of the best hammers in the game, which can rip apart a defense when used as crossfield throws. In the below example, starting at the far third of the field, the Royal complete back-to-back throws moving towards the far sideline. The second throw is a backhand up the sideline to Quinlan. Nabil Chaouch looks to provide a continuation option down that same sideline into the end zone, and he’s a few yards behind his defender. Because of this slight opening, Toronto Rush defender Jacky Hau gets pulled in the direction of the offense, looking to help on what would’ve been a third straight continuation cut to that side. Hau leaves his man Sacha Poitte-Sokolsky open on the near side of the end zone, Quinlan tosses a no-hesitation crossfield hammer, and Poitte-Sokolsky comes down with the Royal goal.

Quinlan’s quick trigger is a big part of why this throw works so well. Any hesitation and Hau would’ve been able to read Quinlan’s eyes and react a split second sooner to defend the throw. But instead, it happens in an instant: catch, turn, and throw, while Hau’s momentum is still taking him to Quinlan’s side of the field.

The receiver recognizing the crossfield opportunity here is just as important as the throw itself. Poitte-Sokolsky has the awareness to spread the field, keeping things open by attacking the space away from the momentum of the offense. Even if he doesn’t get the disc on the immediate crossfield throw, clearing space for other cutters facilitates additional motion, and can also position Poitte-Sokolsky to continue any swing pass thrown towards the middle of the field.

The above sequence is a great example of the crossfield look being generated by the cutter rather than the thrower. After dumping the disc off to Vincent Lemieux on the far sideline, Miguel Goderre follows his throw to look to get the disc back upline from Lemieux. He’s well-defended though, so he continues his cut down the sideline before turning it back to the opposite side of the field, past the vertical stack. With his defender trailing, Lemieux is able to bend an outside-in flick over the stack to the opposite third of the field, where Goderre maintains position on his defender and makes the catch for the Royal goal.

The space is available because the rest of the cutters in the vertical stack remain in place while Goderre’s cut is still active. These crossfield looks are optimized when the stack stays disciplined, keeping that crossfield space open for a single cutter. Goderre also knows his thrower here; had a less-aggressive thrower possessed the disc, Goderre may have simply cleared back into the stack rather than taking his route to the opposite side of the field. When the thrower, active cutter, and inactive cutters are all on the same page, good things happen for the Montreal offense.

The Royal connected through their deep game all last season, and the big, crossfield looks were a huge reason why they saw so much success. On a per-game basis, only the Ottawa Outlaws completed more hucks than the Royal in 2021.