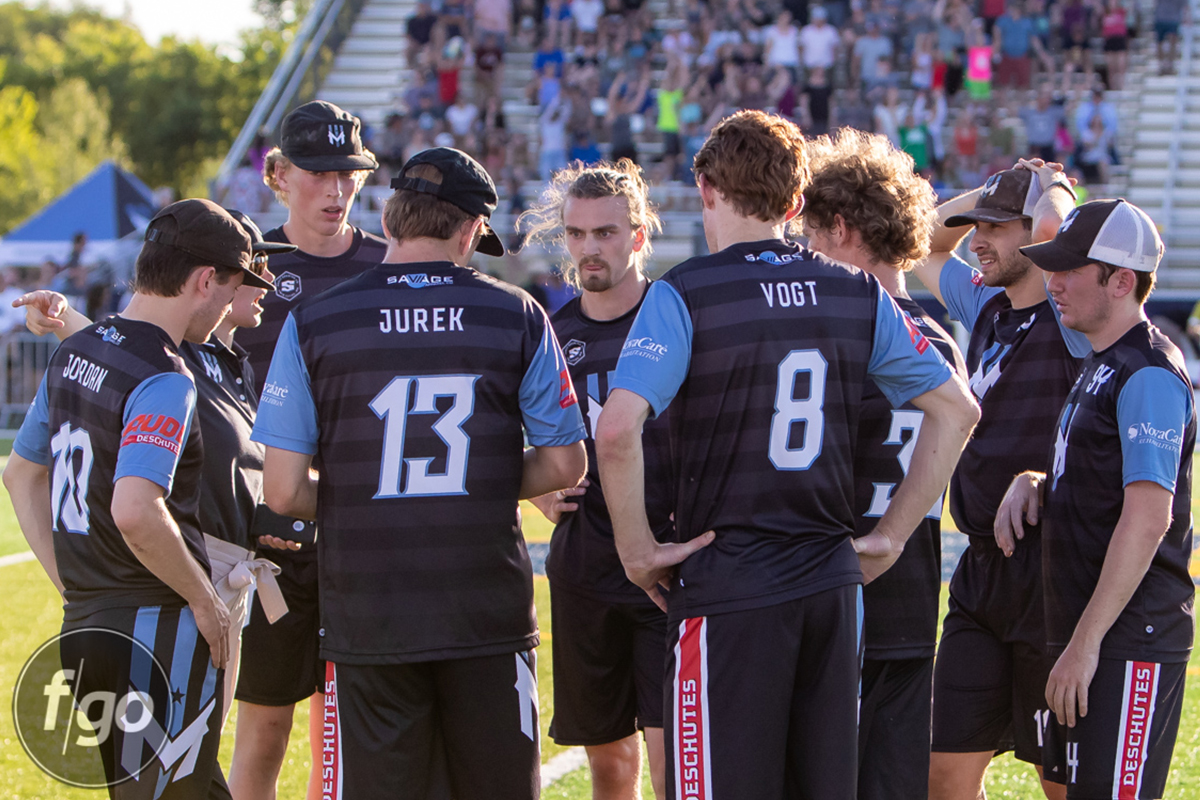 While the Minnesota Wind Chill largely took a possession-based approach to their offense in 2021, the team featured an arsenal of middle cutters that facilitated a dynamic vertical attack. Minnesota excelled at creating space for these featured cutters, adding an explosive dimension to the offense that was balanced by reliable disc movement in the backfield.

The cutting lineup typically featured some combination of Cole “Beef” Jurek, Rocco Linehan, Nick Vogt, Bryan Vohnoutka, and Charles Weinberg. With the exception of maybe Vogt, all of these guys flashed hucking ability throughout the season; three of the four team leaders in huck completions were cutters (Josh Klane still led the team with 14). The firepower wasn’t coming from the backfield a lot of the time, which emphasized the importance of downfield spacing to get the most out of these downfield cutters—get one cutter in space for an underneath cut, and allow a second cutter to take off deep with minimal help over the top. This dual-threat ability held by many of the team's primary cutters paved the way for big continuation hucks when the disc moved out of the backfield.

Jurek and Vogt formed a formidable duo in this regard. Jurek’s throws were as big as his skies, and he often looked to send the disc into the opposing end zone from beyond midfield. The below sequence features a side stack set play after receiving the pull. It begins with Jurek bolting across the field from the middle of the stack to get the initial throw from the backfield. As he’s receiving the disc, Vogt is getting into an isolated position in the middle of the field from the back of the stack, ready to take his defender deep. As soon as Jurek catches the disc, Vogt sets up his deep cut with a quick horizontal move, followed by a plant-and-turn change of direction that allows Jurek to throw it far out to space, into the opposing end zone for the goal.

The Wind Chill cutters are often attacking from the middle of the field, where it gives their throwers the option to put the disc out to space on either side, depending on what the defense is giving them. In this case, Jurek’s mark is positioned to take away the upline throw, and Vogt’s defender is on the inside, so Beef drops a bomb towards the far side of the field for Vogt to run onto.

The Wind Chill used a variety of offensive sets to create space for their cutters, including the horizontal stack, side stack, and vertical stack. Whichever set they’re using, good spacing and isolating cutters remains a key component of the offense. In the below example, Minnesota is spread out in a horizontal stack. After the disc gets swung to Jurek, Vogt cuts hard across the field for a continuation cut, then takes off deep after the pump fake from Jurek. You’ll notice Michael Jordan is also in the deep space with his defender 6’5” Drew Swanson, so Jurek wisely looks off the huck since the space isn’t entirely open. Here’s where Vogt stands out—he’s constantly sticking with his cuts to turn them into explosive plays. Get looked off on an in-cut, turn and bust deep. Get looked off on a deep cut, buy time with the route to make a second deep cut. This sequence is an example of the latter. Jordan knows Vogt has just run by him into the deep space, so he’s going to take his defender out of the space by coming in towards the far side of the field. Meanwhile, Jurek has swung the disc over to Linehan, another capable deep-throwing cutter on the line. With the deep space clear, Vogt breaks away from his defender to create another huck opportunity, and he lays out for the goal on the 47-yard huck from Linehan.

Getting their best cutters in space and giving them the green light on continuation looks has been a recipe for success for the Wind Chill offense over the last few seasons. In 2019, rookie Quinn Snider scored 29 goals in just five games, as he developed fast chemistry with the rest of the O-line. Snider is set to return to the team in 2021 after missing the 2020 season; adding yet another explosive cutter can take this offense to new heights in 2022.