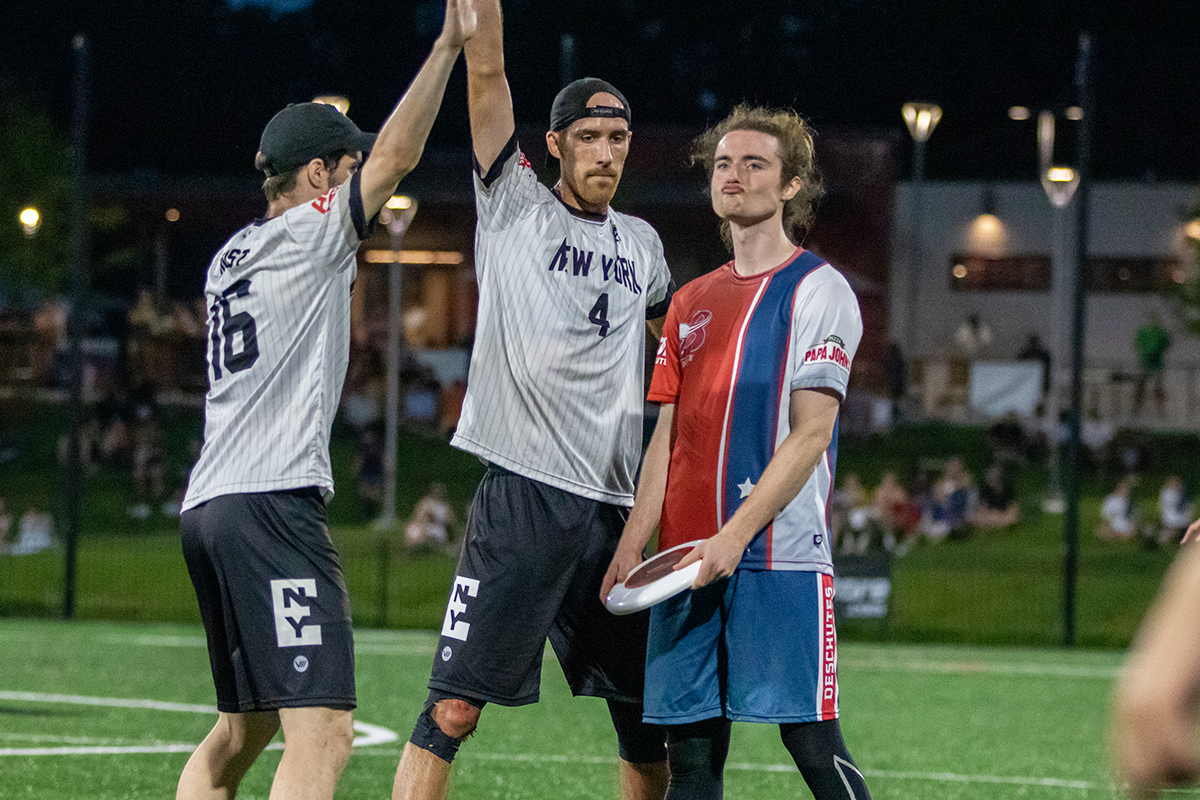 No team averaged more than the DC Breeze’s 311.2 completions per game last season, with their 96.5 completion percentage also ranking first. One of the league’s best possession-based offenses in 2021, the majority of their success stemmed from their ability to move the disc seamlessly between their handlers.

The combination of Jonny Malks, Gus Norrbom, Zach Norrbom, and Rowan McDonnell gave defenses fits all season, as the quartet sliced and diced their way through helpless defenders with great patience and precision. The group was particularly effective in the red zone, with the downfield cutters giving the handlers the vast majority of the space outside the end zone to work sideline to sideline. DC’s regular use of four handlers isn’t particularly common in the league or sport in general; most offenses tend to run through two or three primary handlers. The extra set of hands adds flexibility to the offense and more clearly defines who can rotate in and out of the backfield.

Mixing in hybrids like Jacques Nissen, Garrett Braun, and even Jeff Wodatch from time to time gave the Breeze offense even more flexibility when guys had to clear out of the backfield—whenever one of the four primary handlers pushed downfield, Nissen or Braun could be relied on to fill the vacated space closer to the disc. In the above play, it’s Nissen, Malks, McDonnell, and Gus Norrbom as the primary handlers. As the disc swings to the near side from Rowan to Norrbom to Nissen, Malks pushes downfield on the far side to not only avoid clogging in the backfield, but to set up a key continuation cut off of the handler motion. Norrbom follows his throw to Nissen, forcing a handler switch that he quickly punishes by turning back to the inside. Because he had cleared out of the space before, Malks now comes back to the disc at the perfect time, facilitating a dish from Norrbom and an in-rhythm throw to Joe Richards in the end zone.

The motion works well because the handlers excel at maintaining spacing from the backfield to the intermediate level of the offense. If you watch Rowan, he first looks to potentially provide an option for Nissen as the stall count rises, but mostly hangs back to let the sequence play out when Norrbom gets the disc back and dishes to Malks. And while the offense loves its throw-and-gos, there’s a time and place for them; Nissen recognizes Malks’ motion timing up with Norrbom cut, so Nissen makes the right choice to not follow his throw and keeps the lane clear for Malks.

The below sequence is another great example of guys rotating around the handler set to maintain spacing and flow. The concept to watch here is the DC handlers cutting off of one another—it’s poetic the way every cut seems to have a follow-up cut from another handler that directly responds to it.

Following a Jonny Malks huck to Zach Norrbom, first it’s Rowan coming to reset the stall for Norrbom, before dishing it back to Malks who comes into the handler space from off-screen. Norrbom times his cut to the outside just as the disc is being dumped back to Malks, giving Malks a quick option to throw-and-go up the near sideline with momentum. The cut is well covered, so Malks clears all the way into the end zone, giving Rowan and Zach the backfield with Gus waiting at the front of the stack. They get it off the sideline, and Gus uses Rowan’s motion towards the far side of the field to come back towards the near side, giving Zach an easy inside break look. Rowan is then there to follow the throw after reversing field, and he ultimately throws the assist from just a couple yards outside the end zone.

DC’s handler motion can also create opportunities to more directly attack downfield. Working together in a way that often facilitates power position, Malks and Co. are able to take advantage of their momentum in a way that allows them to attack the crossfield space. Quick throws and changes in direction get them ahead of their defenders, which gives them space to put the disc anywhere on the field.

The variety of ways DC beats defenses with their handlers keeps their offense unpredictable; they can beat teams with a two-man, three-man, or four-man weave. The chemistry the handlers have to easily swap in and out of the handler positions led DC to finish tied for the most efficient offense in the league last season.