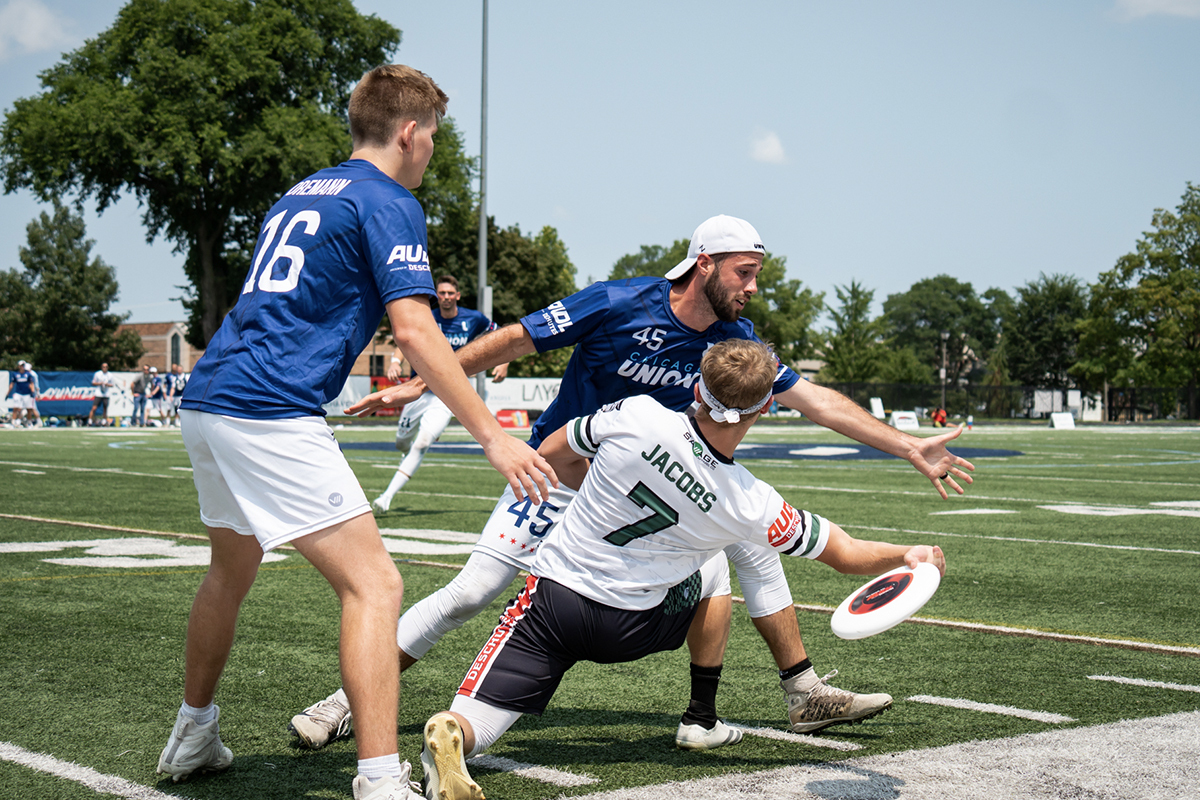 The Chicago Union finished with a top-five defense last season, and their zone-to-matchup defensive transitions were a big reason they were able to contain opposing offenses.

The use of double teams and zone concepts can be very effective in pressuring offenses and forcing turnovers, but they offer a sort of risk-reward strategy. Double teams intentionally leave another player wide open in an attempt to disrupt the throw, which can be great for a defense to use on less-experienced throwers, but could backfire against elite handlers. Zone concepts can be great at slowing down offenses and forcing tough throws when they’re working, but any zone naturally has holes, which good offenses are able to exploit; once the zone is broken, offenses can often string together multiple downfield throws with the rest of the defense lagging behind, resulting in quick scores after the initial break.

Chicago ran a lot of hybrid defenses which began as zones, then transitioned to matchup defense when the opposing offense got moving. This approach counteracts the weakness of zones, and their tendency to allow quick scores after the initial break—by retreating back and switching to individual matchups, opponents are forced to reset their offense rather than continuing to run with the initial zone-breaking momentum.

In the sequence above, Chicago pulls to Raleigh and sets up in a 2-3-2 zone with the Flyers backed up in their own end zone. Through the first five throws of the point, the zone is doing its job, limiting downfield options and forcing Raleigh to reset the disc between their handlers, keeping pressure on the backfield to play mistake-free. Then Sol Yanuck finds a hole, tossing a hammer over the top to Jacob Fairfax on the far side of the field. It’s at this point that the zone has been broken, so instead of taking their front two defenders—Jason Vallee and Joey Kennedy— and having them continue chasing the disc all the way to the far sideline, Vallee and Kennedy hang back on the handlers, the wing defender Charlie Furse matches up on the cutter closest to the disc, and the Union transition seamlessly into matchup defense. This transition is much more efficient than scrambling to reset the zone, where the defense would have fallen behind and been in poor position to stop continuation throws. Instead, the defense catches up and ultimately forces a red zone turnover due to tight, lockdown defense from Drew Swanson.

There are certain situations where zone defenses are more effective than others. One situation is when teams are backed up in their own end zone—the added pressure from defenders hounding the disc can often force rushed decisions when offenses feel a need to quickly move the disc out of Callahan Country. There’s also less space for offenses to work when they can’t keep dumping the disc backwards, making it easier on defenses to predict the next throw. Chicago liked creating this early pressure when possible, before transitioning out of the zone if the offense was able to escape.

Another spot where zones can be devastating is when an offense is trapped on a sideline. In the below sequence, the Union roll a pull out of bounds to set up a double team sideline trap. With two marks and additional defenders surrounding the disc, throwing options become extremely limited and predictable. Yanuck gets off a quick first throw, but it still leaves Henry Fisher trapped on the sideline, arguably a better situation for the Union because the disc is in the hands of a cutter. So Chicago remains in their trap zone, now with a second try at forcing a turnover, though this time the thrower hammers a big reset to space. Now with the disc further off the sideline in the hands of a handler with space around him, Chicago calls off the trap, transitioning into matchup defense.

Notice there’s a lot of pointing and checking over players’ shoulders during the transition—communication and field awareness are key to make this system work. A lot of the field sense comes from recognizing the biggest threat in a player’s immediate area. Watch how Nate Goff has his momentum going towards the reset handler after the hammer goes up, but even though he’s the closest defender, he turns away to take the matchup on the near side of the field. As the off-side defender in the trap zone set, Goff knows there isn’t anyone behind him to take that Fairfax matchup, so he shifts towards the more active threat—that big swing out to space is much more threatening than a handler with no mark, plus one of the initial double team guys can remain in the backfield to cover the handler.

This zone-matchup hybrid approach allowed Chicago to better control the pace of the offenses they faced. Right when offenses would be off and running after breaking the Chicago zone (if they were able to break it), the Union’s transition to matchup defense slowed everything back down. This approach resulted in the Union finishing with the second-most completions allowed per game and the second-fewest scores against in 2021, as they forced offenses to work patiently through their blend of defenses all season.