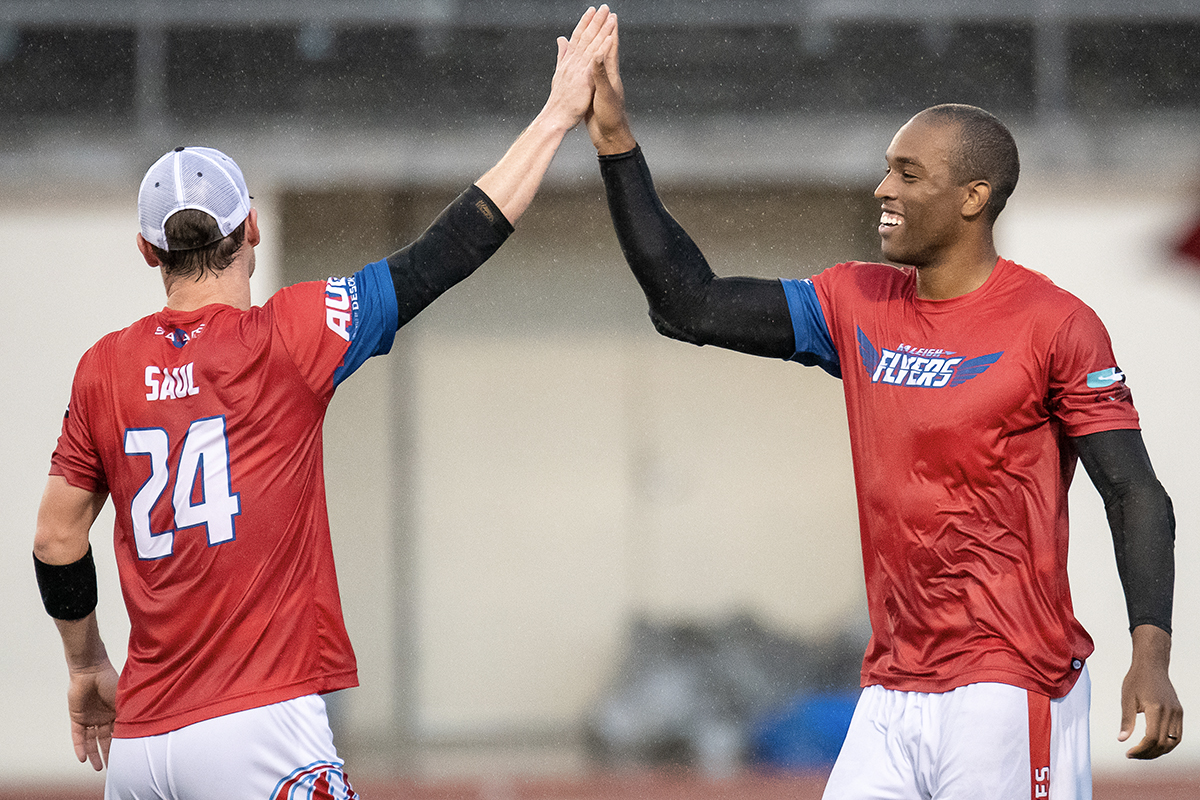 With a surplus of versatile defenders and a strong defensive system, the Carolina Flyers showcased lock-down handler defense throughout the 2021 season. Their ability to keep constant pressure on opposing backfields allowed them to close out several key wins in their championship run.

The Flyers’ handler defenders all have great instincts and ultimate IQ, and their ability to truly work as a unit sets them apart from other teams. The group does an incredible job playing team defense in the backfield, switching on and off of marks to restrict handler motion. They also know exactly how and when to clamp down on their matchups when the stall count rises.

In the above example, the Flyers have Boston backed up in their own territory. A non-handler, Boston’s Davis Whitehead, has the disc and suddenly the backfield is flooded with three reset options. Trevor Lynch is marking on the play and does a great job shuffling with the thrower as the stall count rises to deter an otherwise easy dump or swing. With the count rising, watch each Flyers defender in the backfield—Elijah Long, Ethan Bloodworth, and Noah Saul (from near side to far side)—tighten their coverage as it becomes clear Whitehead is looking to dump it off. Bloodworth comes up on Ben Sadok, which forces him to clear out of the backfield. Lynch, in turn, shuffles slightly back upfield to stop the strike cut. This movement does give the thrower an opening for a far-side swing, but Saul sees this coming; he’s already stepped in front of his man to better position himself to defend any active cut. When the active cut never comes, but the throw goes up out of desperation, Saul is in perfect position to lay out for the block and get the disc back for Carolina.

It’s imperative that defenders are on the same page when playing optimal defense like the Flyers often display. In the Boston example, they’re all reading the situation the same way, all aware of the rising stall count and which options are being looked at, and their jobs of denying each option are made easier by working off of each other.

The concept of switching off of current matchups to help on active cuts is also built into the framework of the defense. Knowing the rest of the defense can help on open cutters leaving the handler space allows the handler defenders to pick their spots to get a bit more aggressive on resets.

The below sequence features great team defense helping out on the most active cut. With momentum on their side after finally tying up their Week 11 game vs. Atlanta in the fourth, the Flyers defense is determined to keep riding this momentum to take their first lead. John Stubbs has the disc on the sideline, and looks off the first upline cut from Tanner Robinson, who’s well-defended by Elijah Long. Eric Taylor is covering the next active cut in the backfield, center handler Austin Taylor, who basically becomes Stubbs’ only nearby option once Robinson clears out of the backfield. The stall count is rising, and with the guy who touches the disc more than anybody else on the team actively cutting in the backfield, the primary target couldn’t be more clear.

In addition to Eric Taylor, who has tightened his coverage, two other Flyers defenders recognize Austin Taylor as Stubbs’ only real option. At the front of the stack, Alex Davis starts sagging off his matchup towards the backfield, anticipating a throw within the handler space. Meanwhile, Long lingers in the upline space following the Robinson clear-out, relying on the rest of the defense to pick up Robinson downfield so Long can take away the most immediate threat. Because they have this help set up to deny any upfield cut by Austin Taylor, Eric Taylor is able to be more aggressive stopping the backwards reset. So he overcommits to stopping that swing, which plays perfectly into the Flyers help defense; Austin Taylor cuts directly towards Long and Davis, where Long is able to intercept the throw and ignite a Flyers fast break.

Through help defense, switches, and tight matchup defense, the pressure Carolina has been able to create in the backfield leads to plenty of fast-break opportunities in transition. Since 2017, the Flyers have never ranked lower than fourth in the league in breaks per game average; their handler defense is a big contributor to this success.