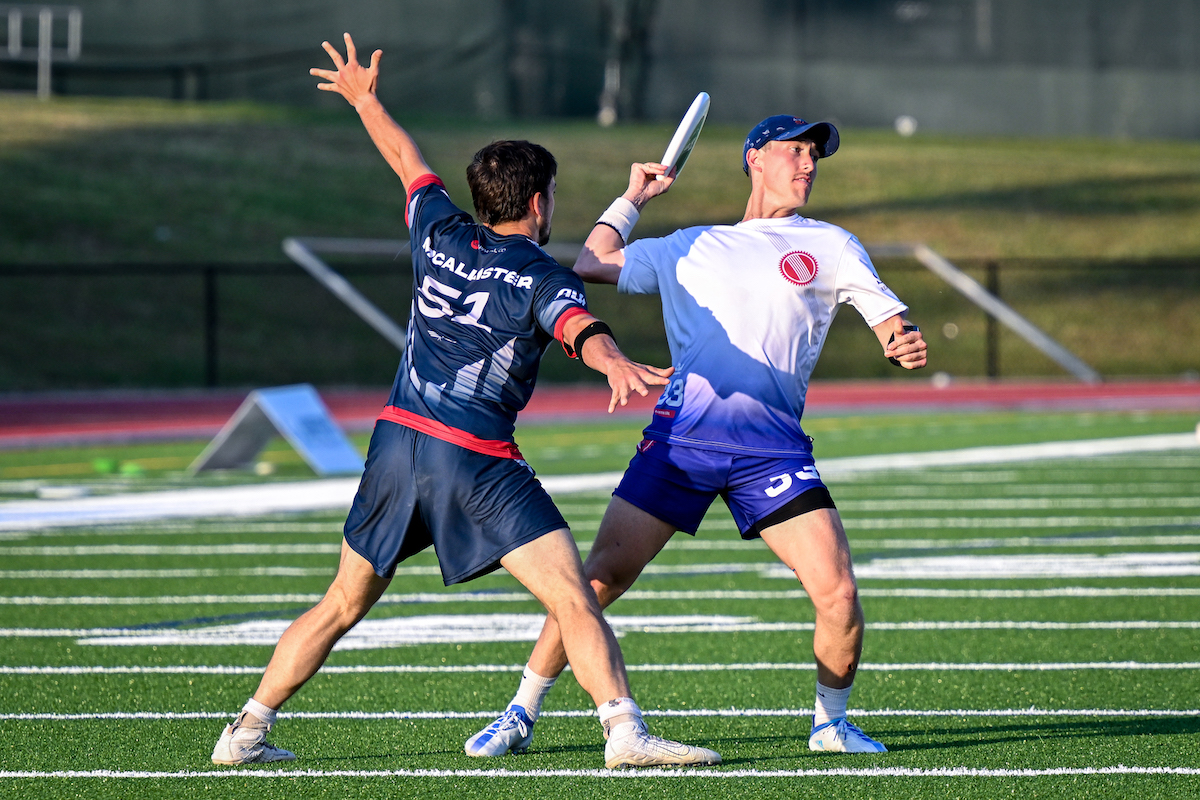 After finishing the regular season with a winning record for the first time in franchise history, the Austin Sol are looking for their first playoff win against the reigning AUDL champion Carolina Flyers. The teams have met twice already this season, splitting games 1-1 with each team holding strong at home. 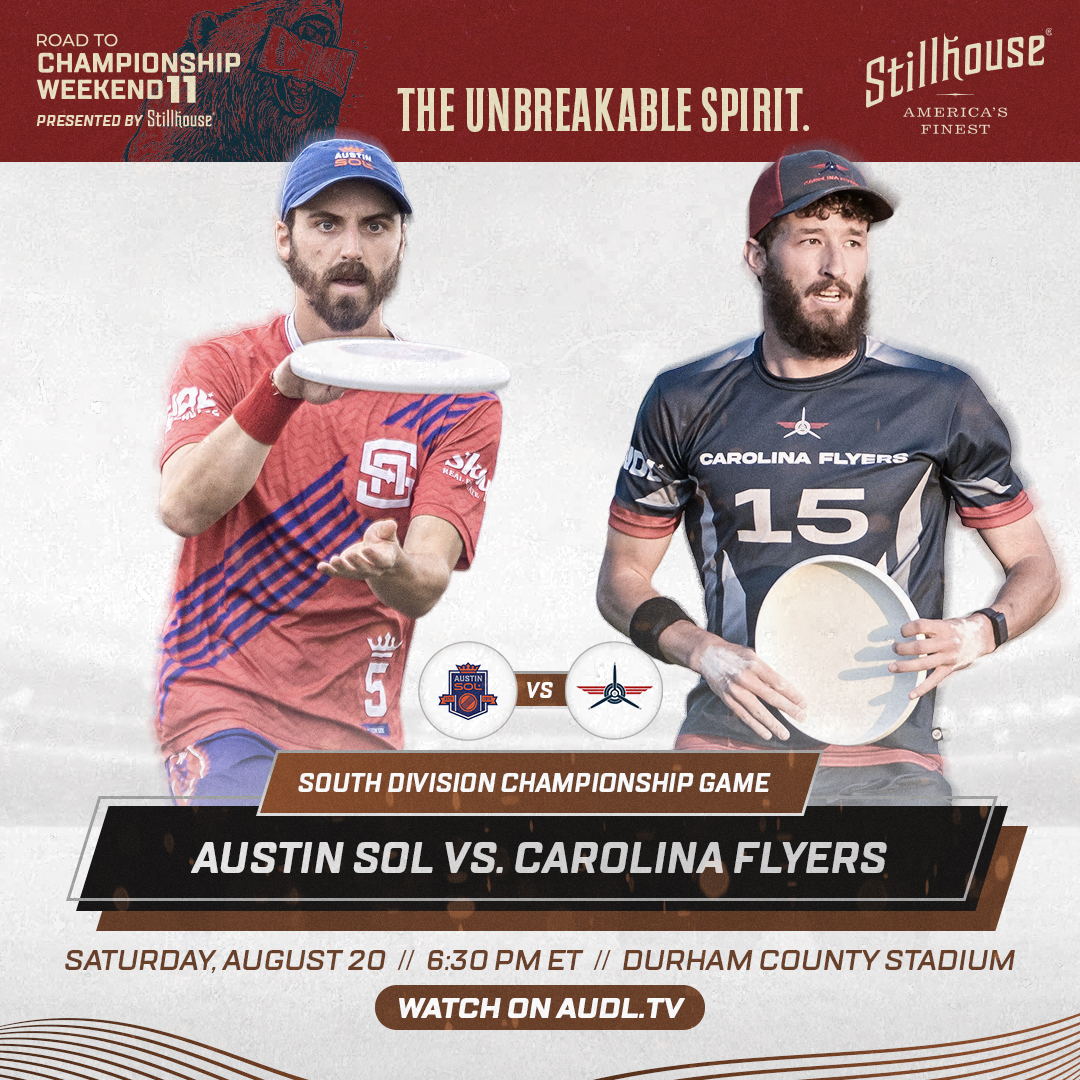 The first meeting of the season came back in Week 4, when Austin traveled to Carolina for the first leg of a double-header road trip. Despite the Sol starting the game on a 5-1 run, Carolina’s defensive pressure caught up to Austin until an eventual Justin Allen Callahan served as the clincher in the Flyers’ 27-24 win. Still, the Sol offense played nearly as efficiently as the Flyers—Austin converted 19-of-31 possessions while Carolina converted 20-of-31—and they proved they can play with the league’s top teams.

In their Week 6 rematch with Carolina playing their second game of a back-to-back, Austin played their best game in franchise history. They finished with just nine turnovers in the game to Carolina’s 10, each team had just six break chances, and the Sol’s 21-20 win was sealed by clutch plays down the stretch from Mark Evans and Ethan Pollack. That game stands as the only blemish on Carolina’s 11-1 record, and it was exactly the win Austin would need to make the playoffs. 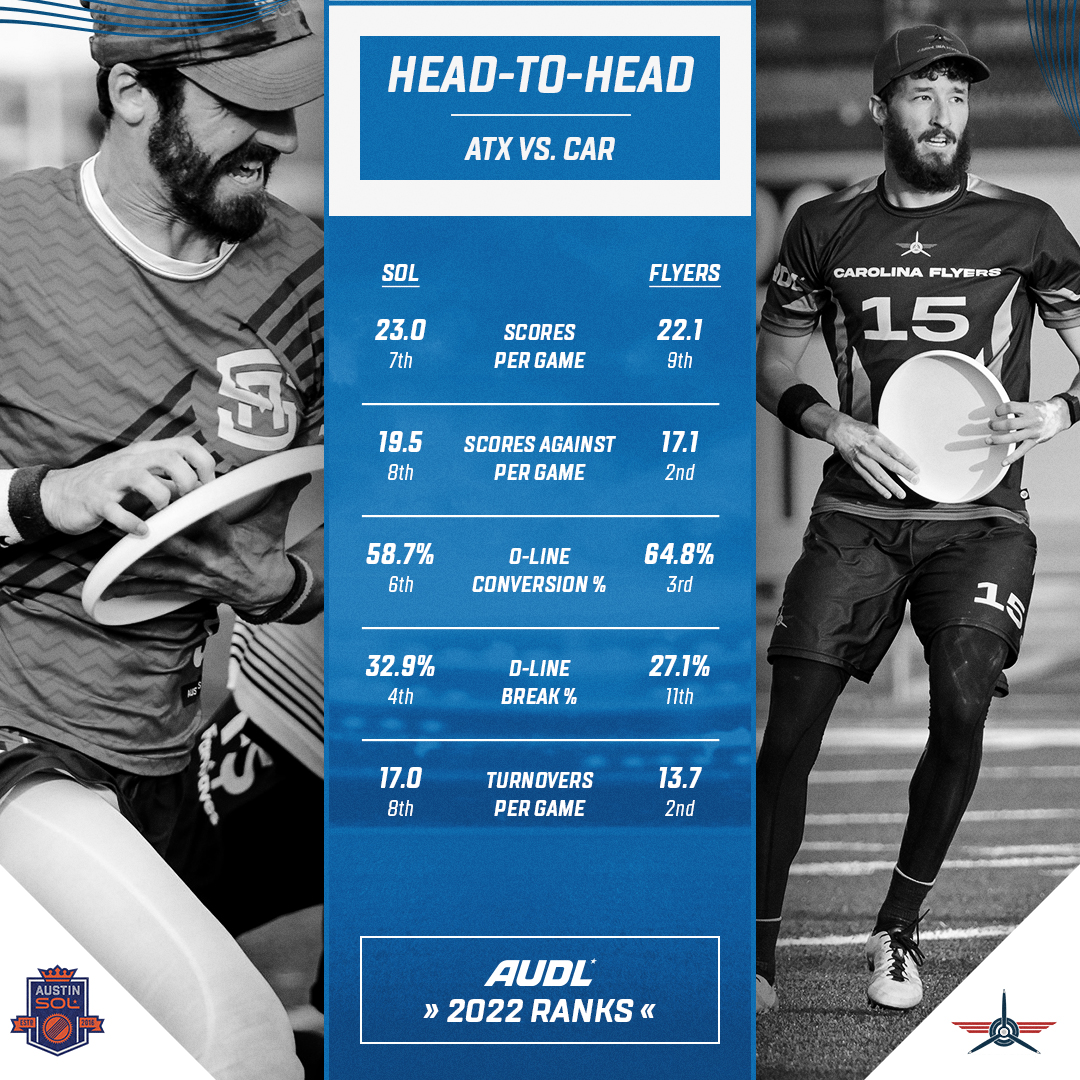 The aforementioned Evans alongside Evan Swiatek and Kyle Henke have formed one of the most formidable cutting trios in the league, in large part due to their complementary hybrid skill sets. Swiatek has been an incredible initiator this season and last, leading the team with over 3,000 receiving yards and 45 goals in 2022, while Henke and Swiatek have been a bit more involved as continuation throwers, each completing over 300 throws with a combined 78 assists this year between them. The group stands as one of just three cutting trios around the league to all record over 4,000 total yards this season.

While the cutters will play a major role, the action starts with Jake Radack on offense. Austin’s QB1 ranks top three among rookies in most offensive categories this season and leads the team in total yards by over 1,200. Whether or not he’s been able to limit throwaways has been the difference between winning and losing this season; Radack had four or more throwaways in all three Sol losses, while recording three or fewer in all nine wins. His ability to manage Austin’s deep game is sure to play an important role for the third meeting, as the Sol completed a season-low five hucks in game one vs. Carolina before connecting on season-best 11-of-12 in game two.

The Flyers defense will have the task of containing Radack and keeping the Sol offense out of rhythm, and with an all-star lineup of handler defenders, they could (in classic fashion) find success building pressure throughout the game to force late-game turnovers. The entire D-line is flexible in their matchups (it’s not even worth listing names), which helps breed a switching and help-style system that forces offenses to work for a full four quarters.

It’ll also be worth watching whether Eric Taylor stays put on offense, or crosses over to help limit Austin’s weapons. Taylor anchored the D-line throughout the 2021 playoffs as a puller, top matchup defender, and counterattack weapon, but he’s since switched back to offense this year due to the absences of 2021 All-AUDL selection Allan Laviolette and 2021 Rookie of the Year Anders Juengst. Juengst is a game-time decision in this one and could make his first appearance since Week 2; if Juengst is able to suit up alongside Alex Davis, Jacob Fairfax, Henry Fisher, and Terrence Mitchell, Taylor may end up having a bigger impact defensively.

In their last meeting with Austin, the Flyers handler duo of Sol Yanuck and Matt Gouchoe-Hanas completed 132-of-133 throws for 865 throwing yards and six assists. They’ll again lead a Flyers offense that has been the third-most efficient in the league this season and is actually coming off their best game of the season, when they converted 21-of-25 possessions (84 percent) against Pittsburgh just over a month ago. Fairfax and Fisher continue to be a collective force downfield, while Davis scored 53 goals in the regular season, good for second most. Whether they’re managing pressure with patient resets in the backfield or attacking downfield with continuation throws, the Flyers offense is a well-oiled machine that few defenses have had an answer for this year.

Austin hasn’t been able to do much to contain Carolina thus far—the Flyers have converted on 67.3 percent of their offensive possessions against the Sol, 2.5 points above their season average—but they do have the playmakers and counterattack weapons to keep the pressure on Carolina. Jake Reinhardt and Matt Armour have headlined the Sol D-line this season both as takeaway artists and D-line handlers, with Reinhardt additionally performing as one of the top pullers in the league. Oliver Fay, Mark Henke, and Joey Wylie have each recorded eight-plus blocks and with the big tandem of Ethan Pollack and Mick Walter, the Sol will look to limit Carolina’s deep game like they were able to in their second meeting; the Flyers completed a season-high 14 hucks in their win over Austin, compared to just six in their loss.

With 19 combined turnovers between the two teams in their last matchup, the South Division Championship Game will again magnify the importance of each turnover, and each subsequent break opportunity. Efficient deep attacks seem to be the key to success for both teams and should again play a significant role in determining which team advances to Championship Weekend.