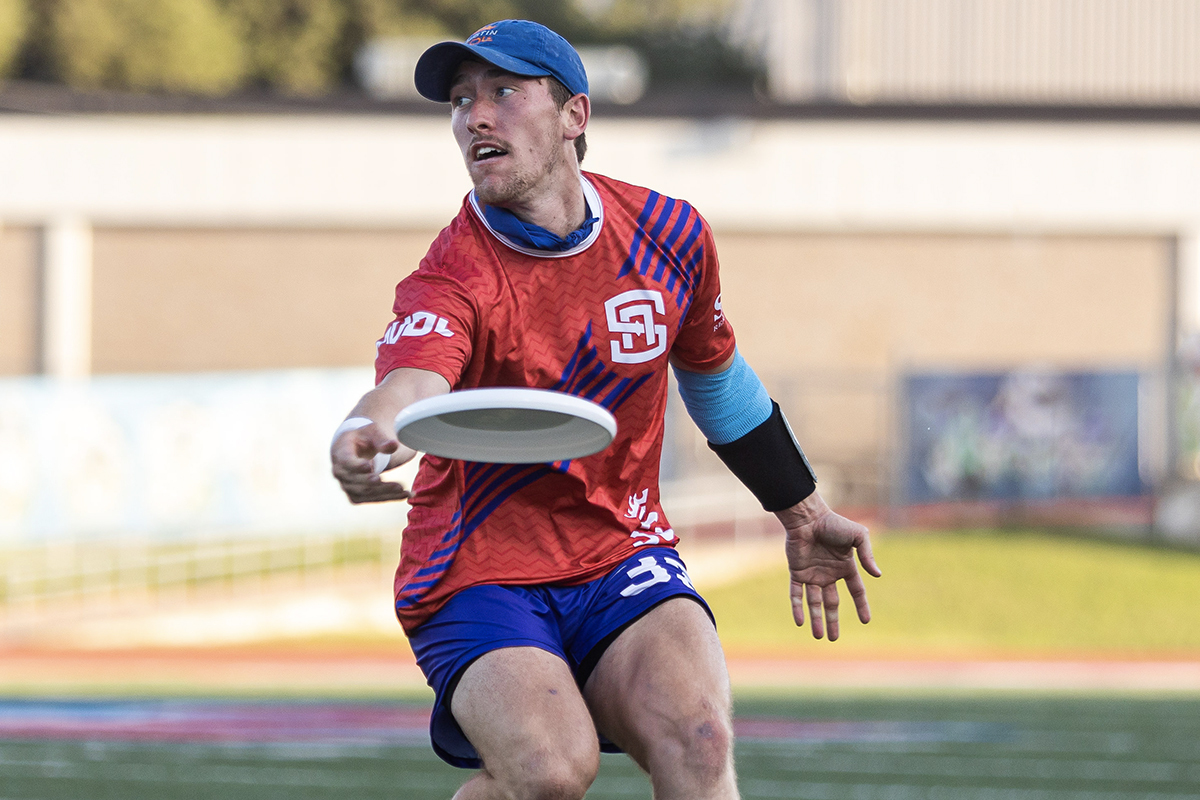 “He’s QB1. Everything flows through him. When he’s on, we have a high chance for success.”

Austin Sol Head Coach Steven Naji spoke highly of Jake Radack in this week’s Tuesday Toss, and the team is going to have to continue leaning on their offensive leader if they plan on taking down one, if not both, of their road opponents this weekend. Through the first two games of the season, Radack leads the team in assists (8), completions (75), and total yards (1,213). No one else on the team has eclipsed 800 total yards. Having a go-to center handler this season has brought much-needed consistency to the Sol offense after an up and down 2021, with the team currently ranking top 10 in offensive efficiency. As the primary distributor, Radack is the guy that allows downfield hybrids like Mark Evans, Kyle Henke, and Evan Swiatek to thrive in the Sol system, and with Carolina and Atlanta on the docket this weekend, the group will need to stay highly efficient in a tough road double header.

Keeping with the center handler theme, Sol Yanuck should be in for a big week against Austin. After leading the league in throwing yards in 2021, Yanuck is averaging 355 throwing yards per game in two games this season; dating back to last year, he’s eclipsed 350 throwing yards in nine of his last 11 games. Absent for the Carolina Flyers this week are Henry Fisher, Anders Juengst, and Eric Taylor, perhaps putting a bit of added pressure on Yanuck and his backfield counterpart Matt Gouchoe-Hanas to advance the disc from the handler space rather than relying on continuation cuts downfield. The Sol have allowed an average of 10 completed hucks per game, tied for the fifth-highest average in the league, so deep opportunities should be there for Yanuck and the Flyers offense even without Fisher. It’s also worth mentioning that Yanuck and “Fastest Man in Ultimate” Alex Davis—who led the team in receiving yards with 409 last week—are expected to start on offense for the first time together as Flyers.

Tannor Johnson will look to get his team back on track this week after three straight losses following their opening night win over Philly, the last game in which Johnson was active. He totaled 400 yards of offense with three assists and five goals in their Week 1 victory, wreaking havoc on the Phoenix defense all night alongside fellow big Orion Cable. It’s nearly impossible for teams to key in on both dynamic cutters let alone one, and both are in the lineup for a Boston Glory get-right game against Toronto. This game has shootout potential, with both teams ranking towards the bottom of the league in defensive efficiency; Boston and Toronto are two of nine teams that allow scores on over 75 percent of opponents’ offensive possessions. These teams love the deep ball, and Johnson could be a main beneficiary on both the throwing and receiving end for Boston this week.

While we nearly had a return of both French goal-scoring specialists in Sacha Poitte-Sokolsky and Quentin Bonnaud this weekend—Bonnaud was listed as questionable earlier this week but has since been downgraded to out—we’ll have to settle for just one, as Poitte-Sokolsky is back in the Montreal Royal lineup this week against Philly. While Montreal has had either Bonnaud, Poitte-Sokolsky, or both to lean on as primary goal-scorers the past two seasons, their offense has been lacking a go-to target this year. Jakob Brissette and Kevin Quinlan, the two biggest throwers on the Royal offense, have both seen reduced huck numbers this season compared to last, and Quinlan especially has been missing a top downfield target for continuation looks. SPS has a great feel for cutting responsively to his teammates, regularly setting them up for opportunities to take shots; he led the league in goals per game last season (4.8) and ranked fourth in receiving yards per game (319). Two key absences in the cutting core—Malik Auger-Semmar and Nabil Chaouch—will put added emphasis on his 2022 debut.

38-year-old Jonathan “Goose” Helton is never slowing down. The former two-time AUDL MVP continues to contribute at a high level for the San Diego Growlers, totaling 16 scores and three blocks through his first three games of 2022. He’s also quietly completing nearly 93 percent of his throws, a number that would mark a career best if he keeps it up throughout the season. While he’s completed the third most throws on the team, Helton often operates as an initiating cutter in the Growlers offense and still spends plenty of time cutting downfield, capable of big continuation hucks and winning battles in the air. The Growlers will be missing Helton’s hybrid counterpart in Travis Dunn this weekend, which should mean more opportunities for Goose against a Cascades defense that ranks second-to-last in defensive efficiency.

Bobby Ley made league news this past offseason signing with the Atlanta Hustle and will look to provide some much-needed balance to the Hustle backfield in his first game with the team this weekend. A pure gunslinger for Tampa Bay, Ley ranked top 10 in the league last season in assists, completions, throwing yards, total yards, and completed hucks on a per game basis. While the Cannons needed him to provide firepower to the O-line, in 2019 Ley showed he could play a much more complementary role working alongside Eric Taylor in the Flyers backfield. This year we’ll likely see him paired with the other Taylor in the South Division, Austin Taylor, in the Hustle backfield, which at times last season ran into trouble when defenses could key in on the one-man show generating most of the offensive production. Sharing a similar propensity for big throws, Ley should take a lot of the pressure off Taylor and give opponents yet another gunslinger to look out for.

Perhaps overshadowed at times by the bigger-name stars on the Portland Nitro, Daniel Lee is off to an incredible all-around start in his first year with the new team. His Nitro career has begun with 12 scores and six blocks in two games, and he’s yet to turn the disc over. Lee is an O-line starter, but he’s shown a consistent ability to earn the disc back after turnovers, which was on full display when he recorded three blocks in a single point against Colorado two weeks ago. He’s a top talent in the air, whether he’s skying for blocks or goals, and we’ve already seen his quickness flash on multiple run-through blocks. This week the team will be without Raphy Hayes and Jack Hatchett, as the team travels south to Oakland to face the Spiders for the first time since their preseason game. Lee could easily be needed on both sides of the disc in Portland’s first road test of the season.