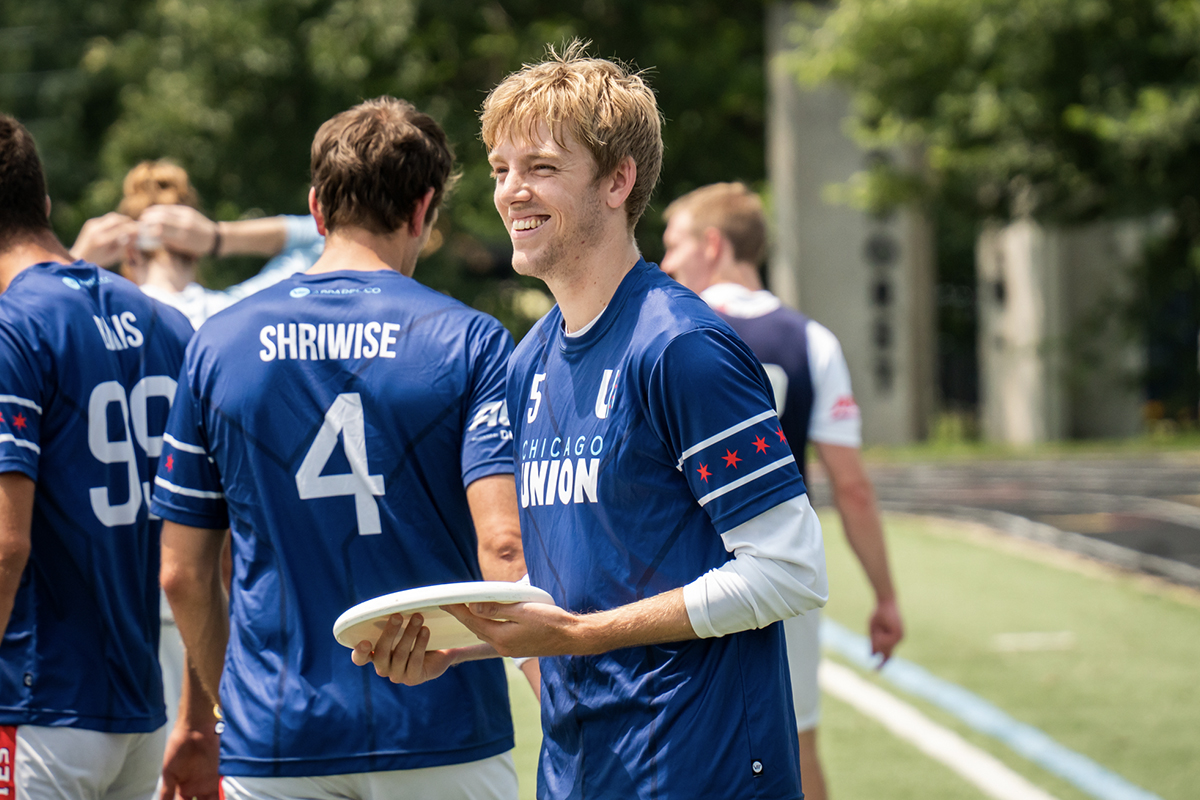 Another season, another 40-plus goals for Cameron Brock. Including playoffs, and not counting 2021 when he played just four games, Brock has now reached the 40-goal mark in every single AUDL season. That’s nine seasons of 40-plus goals, and even if he had stopped at exactly 40 in those nine years, he’d still have an AUDL record 360 career goals. But for the first time this season, he was held under three goals and recorded his lowest single-game receiving yardage output (169) against Chicago last weekend, with Indy struggling to find their offensive rhythm outside of the first quarter. The offense will need their veteran finisher to get them back on track in a second-straight outdoor game in Madison, as the AlleyCats take on the Radicals this week in what is essentially a playoff game. Brock has facilitated the bulk of Indy’s offensive success in their last two meetings with Madison, totaling five assists and nine goals in those games, though both were played indoors. It remains to be seen whether the AlleyCats can compete at the highest level of the division while dealing with the elements, but if they’re able to push Madison, Brock’s downfield success will be a big reason why.

Historically, the Madison Radicals don’t get a ton of individual production from rookies. Their identity has been that of a veteran team for years now, and they’ve leaned on those vets to lead the team both offensively and defensively. But this year has been different, as rookie Jake Rubin-Miller has emerged as a top playmaking defender for the top-10 Madison defense. Between his athletic playmaking and springy celebrations, Rubin-Miller has been a spark plug for this Radicals D-line all season, often punctuating counterattack drives after forcing turnovers in his heat-seeking missile play style. Rubin-Miller’s 10 blocks are tied for sixth most in the league among AUDL rookies, and he currently leads the team in the category, which is especially noteworthy considering the Radicals haven’t had a rookie lead the team in blocks since Peter Graffy did it in 2014. JRM finished with multiple scores and multiple blocks for the first time in his career last weekend against Minnesota, and he’ll look to continue energizing the Radicals defense in a must-win game vs. Indianapolis tomorrow night.

Former MVP vs. former MVP this week as Jonathan “Goose” Helton battles Jonathan Nethercutt and the Colorado Summit for the first time this season. Helton was absent for San Diego’s Week 9 road trip to Salt Lake and Colorado, and his presence was missed, with the Growlers dropping both games by five and six-goal margins; since Helton joined the team in 2019, the Growlers had only lost by five-plus goals once, and it came at Championship Weekend 8 to Dallas. Helton’s last AUDL action came about a month ago, when he tormented the LA defense with the deep ball, completing 6-of-6 hucks en route to a six-assist, two-goal, 475-yard performance. The Growlers had their most efficient offensive game of the season that day, as the offense looks to be optimized with Goose in a free-flowing catch-and-shoot role from the front of the stack. Colorado has allowed the fifth-most completed hucks per game in the league, and San Diego was able to connect on 8-of-14 without Helton in their first meeting. Expect that number to rise with Helton’s return to the lineup.

Playing his first game in over a month, Paul Arters returns to the Chicago Union lineup for the Week 12 Game of the Week against Minnesota. In addition to missing their most recent meeting two weeks ago, Arters also missed the first meeting with the Wind Chill in Week 2, though the Union offense was still able to rally behind a strong lineup of throwers to take home the 24-21 win. One of the best all-around players on the O-line, Arters provides a nice complement to the rest of the offense whether he’s initiating downfield or facilitating possessions in the handler set. His flick huck is a lethal continuation throw, and with the Union averaging nine completed hucks per game over their last four, he’ll likely have the green light to take shots this week in Minnesota. No Eli Artemakis for the Union O-line this week, but slotting in Arters should give the offense more versatility in a critical battle for first place.

Bryan Vohnoutka had his best game of the season last time the Minnesota Wind Chill played Chicago, with three assists, six goals, and 382 yards of offense without a throwaway. Aside from center handler Andrew Roy, Vohnoutka was the most involved player on the offense with a season-high 36 touches, as he was the key facilitating cutter on nearly every possession. He looks to be mostly back in his role as the team’s primary O-line cutter after starting the season on defense, and the Wind Chill seemed to find a recipe for success in exploiting his matchups against Chicago; he played a season-high 21 O-points in the game and has now played over 75 percent of his points on offense over his last three games. B-Von is five goals away from becoming the Wind Chill’s all-time leader in goals, and he’ll have a shot to do it this week in front of the home crowd.

The Philadelphia Phoenix have a chance to essentially lock up the third playoff seed in the East this weekend in Toronto and thankfully, they’ll have their QB1 in the lineup. Jordan Rhyne is coming off his third 60-plus completion game of the season against DC and is now averaging over 50 per game for the year, fifth most in the league. The primary deep thrower on the second most huck-heavy team in the league, Rhyne’s throws have done wonders for the Philly offense, which has the deep speed, athleticism, and complementary throwers to attack teams from a variety of angles. He’s completed 21-of-26 hucks (80.7 percent) on the year, connecting on an average of three per game, and this week he’s up against a Toronto defense that allows the third-most huck completions per game at 9.5. Rhyne went 3-for-3 on deep shots in his last game against the Rush, and his throws should again lead the way for the big play Philly offense.

With three weeks left in the regular season, Toronto Rush center handler Luc Comiré leads the league in completions (536), throwing yards (4,674), total yards of offense (5,894), and completed hucks (24). The 23-year-old is having a true breakout year in his third season with the team, and despite Toronto being in the midst of a rebuild following significant roster turnover, Comire has the Rush in position to push for the third playoff spot in the East. They’ll need to beat Philly by at least five goals—something they haven’t done to an opponent all season—to have a chance, though working in Toronto’s favor is their play at home this season. If you take away their blowout loss to New York, the Rush are averaging nearly 25 goals per game in four home games, with Comire throwing for 350-plus yards and five-plus assists in all of them. He also has 213 completions compared to just four throwaways in those games, showcasing a level of consistency that’s produced some of the most efficient performances of the season for Toronto. Comire will undoubtedly need another strong showing this weekend, as the Rush look for their season-defining win.