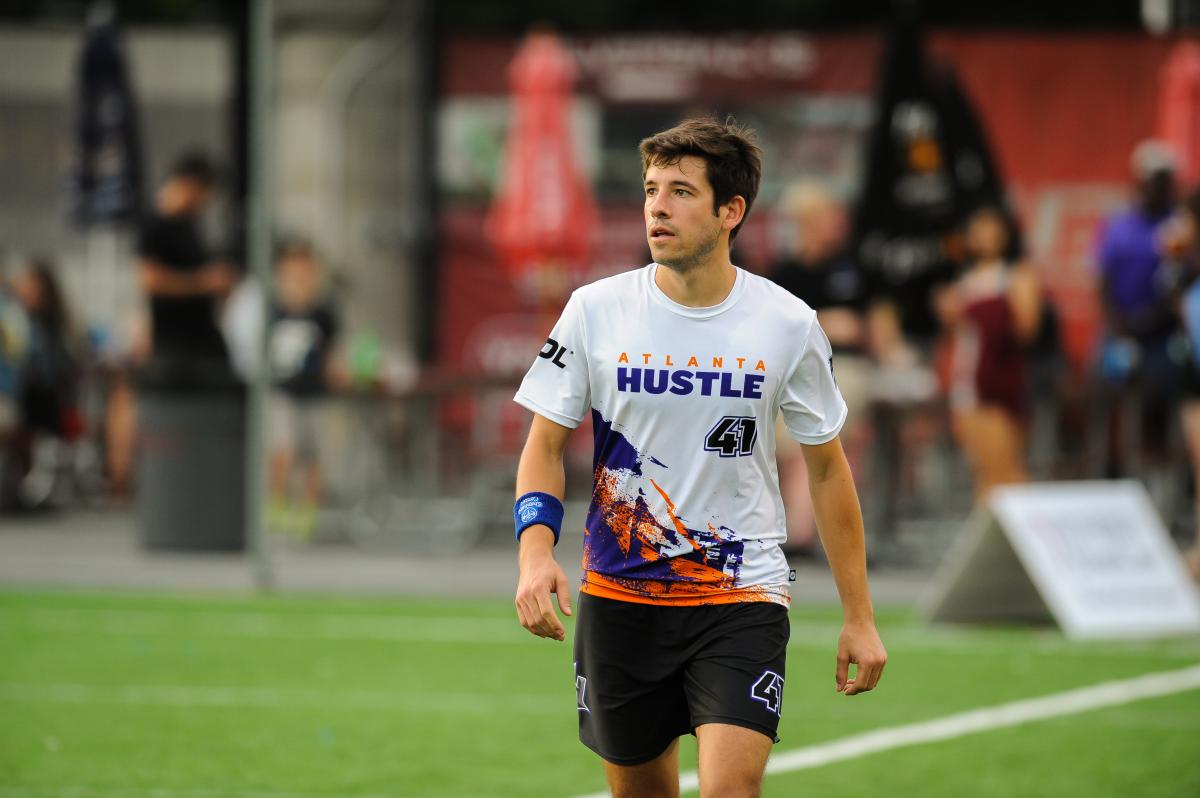 Sean Mott played his best game of the season against DC last week, and he may need another perfect game if the Philadelphia Phoenix offense is going to continue to keep pace with the Breeze on the road. Mott completed all 21 of his throws last week—his first 100 percent completion game of the season—and finished with six assists, two goals and over 200 yards each throwing and receiving. Mott’s touches have been scaled back this year due to some added help in the Phoenix backfield, but he’s been much more efficient with them; Mott averaged a score (goal or assist) once every 7.6 touches last season, while this year that number is down to 5.9. With more receiving yards than throwing yards this season, his comfortability as a cutter is clear and has been a natural fit for this punchy Phoenix offense that still provides plenty of chances for him to shine as a thrower, as he’s gone 4-for-4 on hucks the last two games. With top handler Jordan Rhyne back in the lineup this week, Mott should continue to do what he does best and slash through the Breeze defense as a key midfield option.

Inactive for their first meeting in Philly, Joe Richards returns to the DC Breeze lineup for the rematch tomorrow night in DC. Among all players with at least six games played, Richards is one of just two (alongside Indy’s Cameron Brock) that has scored three-plus goals in every game he’s played, and he has four or more in all but one game this year. At 6’3”, Richards gives the Breeze offense a clear deep threat and red zone finisher; he has 10 more goals than the next closest guy on the team. The way Richards stretches the field and clears space underneath should lead to a slightly more uptempo Breeze offense this week after a season-high 308-completion game last week, and they may be able to capitalize on a few more huck looks with their primary deep option back in the lineup. Richards scored four goals in both meetings with Philly last season, while playing just 27 points across the two games.

Set to make his AUDL debut this week, Joe White will look to make an immediate impact for the Chicago Union. White signed with the team prior to last season, but injury kept him off the field in 2021. Re-signed just this past week, he’ll be the most notable name in a handful of Union returns this week that include Tim Schoch making his 2022 debut and Dalton Smith playing his first game since Week 2. White has been a standout in the club and college divisions over the past several years, and he was named the consensus eighth best club player in the country by Ultiworld in 2020. Possessing both the throws and cuts to wreak havoc on opposing defenses, White will be a fun chess piece for the Union to try and optimize heading into the back half of the season. While his exact fit remains to be seen, Chicago will be without Paul Arters, Jack Shanahan, and a trio of D-line starters this week, including Nate Goff, so the opportunities should be there for White to make plays wherever he slots in.

Expected to make his second start for the Atlanta Hustle this season, Max Thorne should play a featured role in the Hustle offense this weekend, especially considering the players they’ll be missing in Texas. Karl Ekwurtzel, Jeremy Langdon, Bobby Ley, John Stubbs, and Matt Smith are all currently listed as inactive for the Austin game this weekend, leaving a lot of the offensive production up to Thorne, Austin Taylor and Christian Olsen. Thorne was stellar in his debut against Carolina three weeks ago, finishing with three assists, two goals, and over 400 yards of offense on a perfect 19-of-19 throwing day. He gave the Hustle yet another midfield striker to take the top off defenses with both his throws and his legs, and looked to fit seamlessly into the uptempo Hustle attack. He has the skillset to command more touches, though he’ll need to keep his efficiency high to keep pace with the sixth-most efficient offense in the league in Austin. All eyes will be on the depleted Hustle offense in a crucial battle for the second playoff seed.

After spending the majority of his 2021 season playing offense, Eric Brodbeck started the 2022 season on defense before he was switched back over to primary O-line last week to help replace Jake Radack, who will miss his second straight game this week against Atlanta. In six games where he played more O-points than D-points last year, Brodbeck averaged 6.7 scores and nearly 500 yards of offense per game, ultimately being voted 2021 Sol MVP by his teammates at the end of the season. He brings a similar skillset as Radack to the offense with his motion throwing, but he’s a lot more choosey with his shots; Brodbeck averaged fewer than two huck attempts per game last season compared to Radack’s four this year. He’s completing 97 percent of his throws in 2022, and his re-addition to the O-line could lead to more efficiency without the usual share of huck turnovers. He’ll look to find his offensive rhythm working alongside Kyle Henke, who also saw a boost in backfield work in Austin’s first game without their starting quarterback.

Second on the team in blocks and seventh in the league among all primary D-line players in total yards, Chad Yorgason has been a defining piece of this Salt Lake Shred D-line in his rookie season. Yorgason has multiple scores in every game but one this season, as his speed and athleticism have loaned themselves equally to quick strike scores after turnovers in addition to highlight-reel blocks. He’s also flashed plenty of ability as a continuation thrower; his throwing yardage (867) is just 100 yards shy of his receiving total (987), and he’s completed 4-of-5 hucks over his last two games. This week the team will be without Joel Clutton, leaving the younger Yorgason brother as Salt Lake’s top playmaking defender. Up against a Portland team that has allowed their opponents to average 11.8 blocks (fourth most) and 7.3 breaks per game (sixth most), Chad is sure to have plenty of opportunities to make an impact as both a defender and counterattack weapon in the Week 11 Game of the Week.

Portland’s do-everything offensive weapon is on AUDL record watch. Leandro Marx could become the first player to play a full season averaging over 600 yards of offense per game, as he’s currently at 605 in eight games thus far. He’s also averaging 390 receiving yards per game, which would break Ben Jagt’s 358 average from a year ago if it holds through these last four games. No team has had much of a consistent answer for Marx’s non-stop motor, as his lowest single-game yardage output is 485, coming in a game in which he scored 12 times. Marx is a machine with or without the disc in his hands, and while his production hasn’t been translating to Nitro wins lately, he has single-handedly kept them in nearly every game this season—four of Portland’s six losses have come by one or two goals. Like every week, if Portland is going to have a chance at the upset, it’ll be an unstoppable Marx that leads the way.