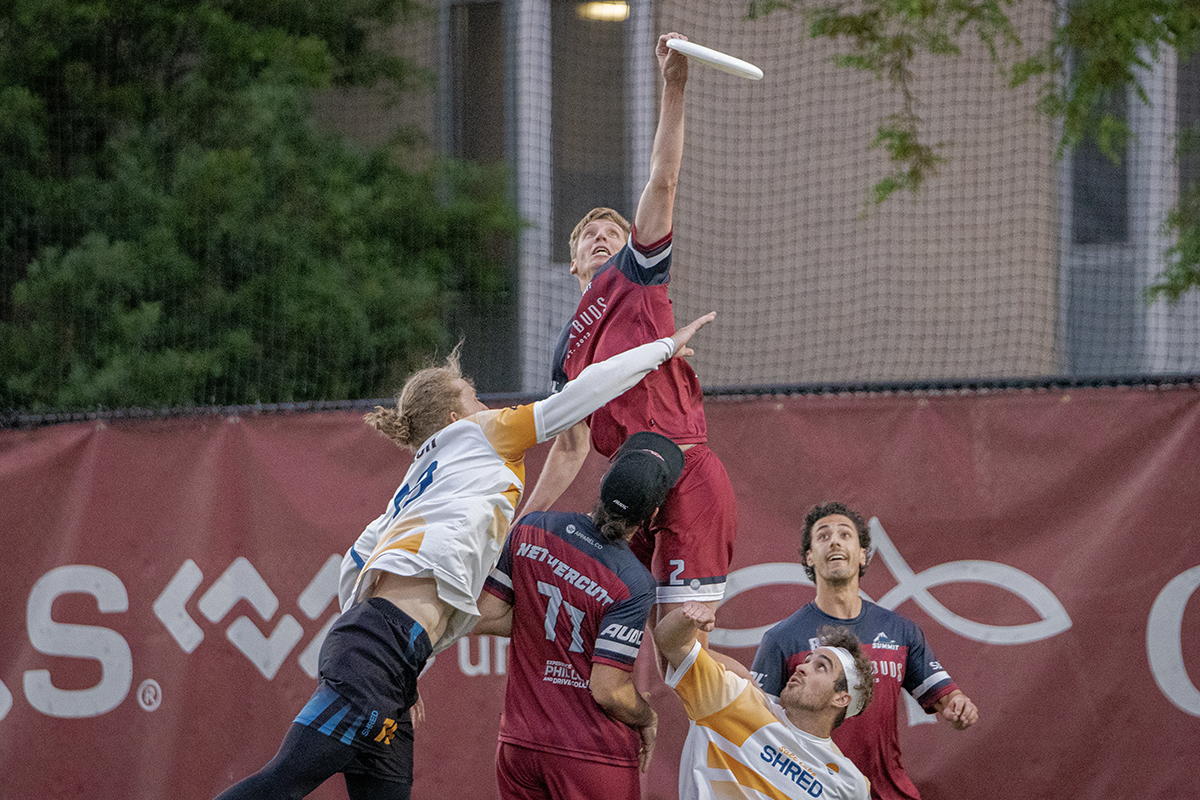 In each of the three Austin Sol losses this year, Jake Radack had four or more throwaways—he finished with three or fewer throwaways in all nine wins this year, including just two in Austin’s 21-20 win over Carolina in Week 6. Radack has carried a significant load in his rookie year as Sol center handler, having accumulated the eighth-most throwing yards in the league and 12th-most total yards. He leads the team with 42 assists and has opened up Austin’s deep game this season; after averaging 6.3 completed hucks per game in 2021, the Sol average 7.9 this season. Just four players in the league have completed more throws of 40-plus yards than Radack in 2022, but with great power comes great responsibility and it’s imperative that he’s efficient with his shots this week. The only game Radack failed to complete a huck (on two attempts) was the game in Carolina, but he connected on all three deep shots in their second meeting in Austin. When Radack limits turnovers while still sustaining the deep dimension of the Sol attack, this team can trade blows with the best in the league.

Deadly as ever with the disc in his hands, Eric Taylor shifted back to offense this year after closing out last season on D-line. 18 percent of Taylor’s completions have gone for assists this year, ranking fourth-highest among all players with at least 200 completions, as he’s set a career-high with 36 assists in 2022. He’s gotten more and more aggressive as a thrower each year he’s been in the league and has slotted in well to the vacated Allan Laviolette role from last year’s championship team. However, with Anders Juengst a game-time decision, it’s not out of the question to see Taylor shift back to defense and help limit Austin’s dynamic trio of downfield hybrids, if Juengst is able to go. Taylor dished six assists in the Flyers’ loss to the Sol, but he also had three throwaways; a shift to defense could help improve Carolina’s 54.2 percent D-line conversion rate in a game where break chances may come at a premium. Whether he’s out there on O or D, Carolina’s best all-around player is sure to make a sizable impact wherever he slots in.

The two-time reigning MVP is on the verge of setting two all-time postseason scoring records. Ben Jagt needs just three goals to surpass Beau Kittredge for the most career goals in the playoffs (41 is the current record), and he’s also nine assists away from becoming the all-time playoff assists leader, which gets a little easier with the current leader’s team (Jonathan Helton of the San Diego Growlers has 48) having been eliminated. Not to say he’ll hit both marks this week—though he did have a monstrous nine-assist, six-goal outing in the semifinals against Dallas in 2018—but it’s worth following his scoring performances this postseason in particular. Jagt is coming off one of his more dominant playoff stretches from a year ago, which began with a season-saving block and highlight-reel layout goal in overtime to eventually beat Atlanta and advance to Championship Weekend. If Jagt flashes his playoff magic on the defensive side, both as a matchup defender and scorer on the counterattack, he could be the nail that puts DC away.

Jonny Malks was arguably the best offensive player for DC in round one vs. Philly, as he led the team with seven scores (two assists and five goals), 55 completions, and 517 total yards without a turnover. He was active for just one of the prior New York meetings this season and struggled a bit with throwaways, logging his lowest completion rate of the season on 40 throws (88.1 percent). His involvement in the offensive backfield as a rotating hybrid has been critical for the fourth-most efficient unit in the league, and in his four zero-throwaway games this year, the Breeze have won by an average of eight goals. While both he and Rowan have spent plenty of time downfield throughout the season, they’re the guys touching the disc more than anyone else in the offense, and they’ll need to limit turnovers to keep pace with the best O-line in league history. Flawless (or at least near-flawless) performances on 100-plus combined touches between Malks and Rowan, and this will be another highly efficient night for the DC O-line.

Returning from injury this week after tweaking his hamstring a month ago, Jay Froude will look to lead the Colorado Summit to a Championship Weekend appearance in their inaugural season. Having been there in five of his six previous seasons‚ Froude knows what it takes to win playoff games and his veteran leadership, along with that of Jonathan Nethercutt and Matt Jackson, will be key in anchoring the O-line against an aggressive Salt Lake defense. Froude put on a show for the home crowd when these teams met in Denver in Week 5, shredding the defense to the tune of seven assists, four goals, and nearly 700 yards of offense on a perfect 18-of-18 throwing day. He also registered three blocks in the game, showing the same burst as a playmaking defender that he developed throughout his career in Madison and Dallas. His matchups with former teammate Joel Clutton have been among the most entertaining battles in the league this season, and with a Championship Weekend berth on the line, sparks are sure to fly as Froude is reintegrated into the elite Summit offense.

Offensive efficiency will be the focal point in Chicago, and there’s no better way to keep pressure on an offense than consistent, end zone to end zone pulls that’ll make Chicago work the full field each possession. Abe Coffin’s impact as a puller was notable in round one against Indy, as he consistently set up the Wind Chill D-line to pressure the AlleyCats offense early. Pulling is just one of many elements that he brings to the Minnesota Wind Chill D-line; his ability to both generate turnovers and quarterback counterattack drives has been an invaluable addition to the unit this year. In the regular season, Coffin ranked second in completions (218), tied for fourth in assists (20), and tied for 16th in blocks (13) among all players that played at least 75 percent of their points on D-line. He completed all seven of his throws against Indy with a goal and an assist, and the team converted 7-of-10 break opportunities on the day, their seventh straight game converting 50 percent or better. Chicago has allowed an average of 9.3 break opportunities per game in three meetings against the Wind Chill this year, making it critical for Coffin and the D-line to take advantage of every chance they get.

Pawel Janas needs six assists to become the AUDL’s all-time leader in assists. And if he can get there on Sunday, he’ll have surpassed Goose’s career total in nearly half the games played (Helton has played 119, while Janas will play his 67th on Sunday). No player in league history with at least 30 games played has averaged more assists per game than Janas’ career mark of 5.8, but statistics aside, he’s continued to lead the Chicago Union offense to new heights over the past few seasons. Chicago’s QB1 is about as reliable a backfield initiator as they come, and while he’s fully able to go every other and facilitate entire drives when needed, he gives the Union cutters plenty of room to work through continuation progressions, some of which he’ll take advantage himself by gaining power position or releasing from the backfield altogether. Janas also continues to shine in the red zone, playing an integral role in leading the Union to back-to-back top five finishes in red zone efficiency this year and last. He’ll look to establish Chicago’s offensive balance early, as the team battles for their second consecutive Central Division title.