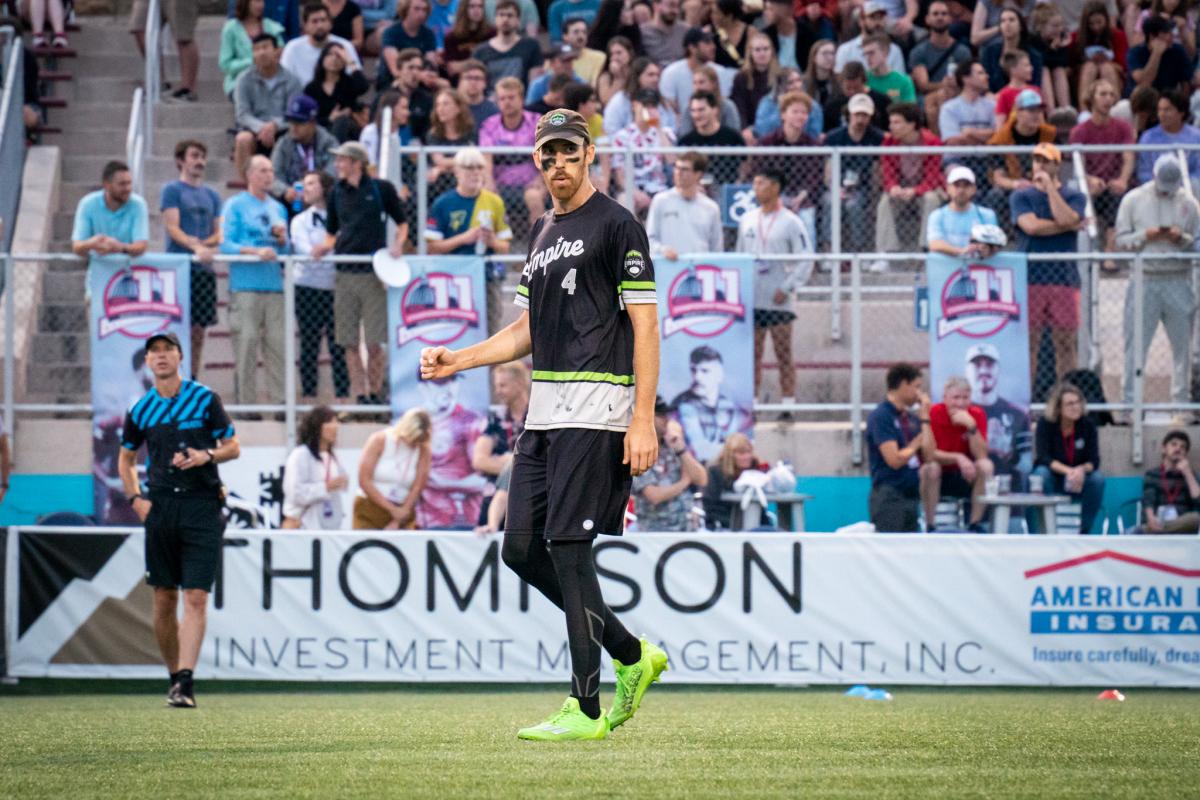 Quite simply, no one else in the league has his combination of power, speed, and skill. Furthermore, Babbitt’s highly-touted buzzer-beating brilliance was again on display at Championship Weekend. Battling through some cramping pain that kept him out of the fourth quarter on Friday night, he still produced seven goals across seven quarters on the field for the Empire, with no turnovers. His biggest highlight was certainly his skying score with just one second left in the third quarter on Saturday night, squelching the growing Chicago momentum with his signature end-of-quarter heroics.

Even when his statistics—three goals, three assists, two blocks in two games— were not overwhelming at this particular Championship Weekend, his presence and energy were absolutely massive factors in New York’s second AUDL title. I won’t go so far as to give him complete credit for Henry Fisher’s mistimed jump in the first quarter on Friday, but he did deny another deep shot to Jacob Fairfax in the Flyers game, and his catch and throw in the closing seconds of the first quarter were an epic illustration of his overall impact. Skeptics of his early-season shift to the D-line are silent now, considering the two-time MVP still finished his 2022 campaign with 51 goals and 36 assists, despite playing 54 percent of his points on defense. Adding to his legacy, Jagt now has 44 goals and 44 assists in the postseason, giving him the most all-time scores in the history of the AUDL playoffs.

It’s crazy to fathom how Lithio had zero national profile as a frisbee player prior to the 2021 AUDL season. With 90 goals in two seasons, not to mention two title game appearances and one championship, the now 29-year-old Hope College alum has firmly emerged as a phenomenal all-around star. This past weekend, Lithio scored nine goals and churned for 534 receiving yards while completing 36-of-37 throws. He repeatedly bailed out teammates by getting open when the stall count was high, and his abilities as a dynamic 6’5” distributor gave the Empire another borderline unfair throwing option. He’s quiet in the huddle, but he’s also quietly become one of the Empire’s most important playmakers.

Great point by AUDL insider Daniel Cohen on twitter this morning: Osgar hit a season-high in receiving yards (394) and a season-low in throwing yards (-24) in the Championship game. Intelligent defenses successfully pushed Osgar downfield more in the playoffs, but he still found a way to leave his fingerprints all over New York’s two Championship Weekend victories, scoring 12 goals and dishing four assists while producing over 600 receiving yards with only one turnover in 49 throws. Over the past two seasons collectively, Osgar’s numbers are absolutely mind-bending: in 28 games played, he has 80 goals, 149 assists, and nearly 15,000 total yards. Most importantly, the Empire have gone 25-3 with Osgar leading the way.

In my nearly decade-long tenure broadcasting elite ultimate, it’s hard to think of a more memorable hand-block than Randolph’s deflection of Alex Davis’s high-backhand late in the first quarter on Friday night. Such a massive, game-changing moment, denying the Flyers the chance to get within one, and giving Ben Jagt another opportunity to sky a crowd in the closing seconds, leading to Jagt’s buzzer-beating throw to Marques Brownlee which extended New York’s lead to three. That one incredible moment alone might have earned Randolph the spot on this Honor Roll, but his defense throughout was the weekend was diabolical, giving fits to whoever he matched up with during the Empire’s pursuit of a championship. It’s possible the 23-year-old Randolph might prove to be too talented offensively to remain as a primarily defensive weapon as he grows into his prime, but his quickness, strength, and instincts presently place him in the top tier of shut-down defenders in our league.

In the regular season, Rueschemeyer-Bailey completed 98.9 percent of his passes as a high-volume handler, with only three throwaways in 10 games. Somehow, his precision and productivity in the playoffs still ticked up a couple notches, as he completed 125-of-126 throws across the Empire’s three playoff games, or 99.2 percent. And at Championship Weekend, all 81 of his throws connected, accumulating 582 throwing yards by steadily guiding the New York O-line down the field. A decade into AUDL action, SRB’s season stands alone in terms of high-volume, high-efficiency passing performances.

The MVP of Championship Weekend showed the world his peak powers in Madison, producing 13 assists, three goals, and over 1,000 total yards of offense. And while the numbers are nice, they barely capture his relentless impact. He was double-teamed on an isolation play near the goal-line, and he still got the disc. With his nifty release points, even active and ambitious marks could not prevent him from picking defenses apart. His 18 assists in the 2022 playoffs tied the AUDL record for a single postseason—matching Osgar’s total from a year ago—and his 53 career playoff assists surpassed Goose Helton’s mark for the most in AUDL postseason history. He signed a three-year contract with the Empire before the 2022 season, he’ll be turning 28 in September, and his reign as the sport’s most-feared clutch performer has likely just begun.