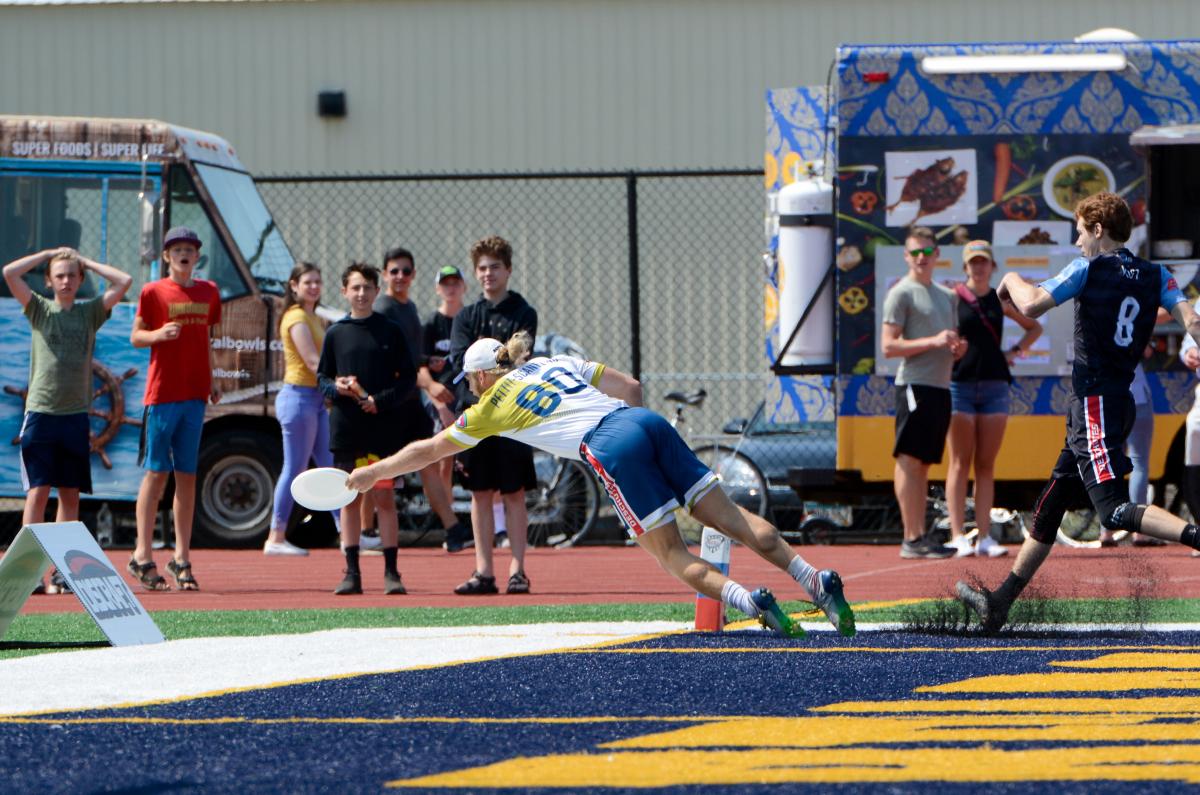 The start of the 2022 AUDL season is just days away, and with the 2022 "AUDL Game Of The Week" schedule now announced, it's time to preview the weekly showcase matchup airing every Saturday night on FS2.

Week 1: New York Empire at DC Breeze
One of the oldest and fiercest rivalries in the league, both NY and DC spent the offseason massively upgrading their already championship-level rosters; both teams look like top-four squads entering 2022, and each has a handful of players that could wind up on MVP or All-AUDL ballots by the end of the season. Almost every matchup between these two teams is decided at the end of regulation or in overtime, including their Week 1 opener from last year that was decided at the buzzer on a hail mary to Jack Williams.

Week 2: Chicago Union at Minnesota Wind Chill
A rematch of the 2021 Central Division title game, Minnesota has revenge on their mind after falling to Chicago in the playoffs thanks to a late 5-0 run to close out the fourth quarter by the Union. The Wind Chill enter the new year as the presumptive favorites to win the division thanks to their impressive additions during the winter, but Minnesota has yet to win a playoff game as a franchise in their seven seasons of play. Chicago and their highly efficient offense led by throwing legend Pawel Janas will give them all they can handle.

Week 3: New York Empire at Boston Glory
There’s no rivalry across American sports quite like New York-Boston, and these two teams showed the beginnings of a feud in their first year of AUDL play in 2021, particularly in their final matchup of the regular season that had the intensity of a playoff game. Boston had the second most potent offense in the league last season as an expansion team, averaging over 22 scores per contest behind the talents of Ben Sadok and Tannor Johnson. The Empire have made two consecutive AUDL championship game appearances and have a roster very capable of making that three in a row with two-time reigning MVP Ben Jagt showing no signs of slowing down his torrid pace of scoring.

Week 4: Austin Sol at Atlanta Hustle
With only two playoff spots available between the five teams in the South Division, every regular season matchup has a heightened importance. Atlanta was one buzzer-beating goal away from making their first Championship Weekend appearance in 2021, and they look to be even better in 2022 with the signings of Khalif El-Salaam and Bobby Ley. Austin is a team on the rise, and the re-signing Kyle Henke gives them a boost of star power. A road victory in Atlanta could be a franchise-defining win for a Sol team that wants to be in the elite tier of competition.

Week 5: Minnesota Wind Chill at Madison Radicals
A border battle of the highest order, Minnesota won the season series 3-0 in 2021 against Madison with their impressive and balanced offensive attack. But the Radicals are eager to return to their position atop the Central Division after missing the playoffs in each of their last two seasons. Championship Weekend will be hosted in Madison in August this season, and the Radicals want nothing more than to avenge last season’s Week 1 heartbreaker on their quest to play at home for a championship in 2022.

Week 6: Carolina Flyers at Austin Sol
The 2021 champion Flyers did not play the Sol last season due to divisional realignment, and have not engaged with the revamped Austin lineup. Carolina is stacked across both their offensive and defensive rotations, have one of the younger rosters in the AUDL—including 2021 Rookie Of The year Anders Juengst—and have the definite possibility of becoming just the second franchise in AUDL history to repeat as league champions. But road trips in Texas are never easy, and the Flyers could get snake-bitten by a surging Sol team if they’re not careful.

Week 7: Dallas Legion at Carolina Flyers
Dallas and Carolina met in three consecutive South Division championship games from 2017-19, with the Legion prevailing in each contest and advancing to the AUDL semifinals. The Flyers conquered many of their closest adversaries on their way to lifting the trophy last year, but they never got the opportunity to face Dallas.

Week 8: Austin Sol at Madison Radicals
A first-ever meeting between two franchises who will be in the thick of their respective divisional playoff races. This midseason tilt will feature a clash in styles, as the Sol love to shoot the disc on offense, while Madison has defense that perennially ranks among the top three in the league. Breese Stevens was an impenetrable fortress of a home field for years for the Radicals, but they’ve shown vulnerabilities at home in recent years; the Sol were first in the league in takeaways per game in 2021, and their athleticism could be disruptive for the Radicals’ offensive rhythm.

Week 9: San Diego Growlers at Colorado Summit
San Diego is coming off back-to-back 10-win regular seasons and Championship Weekend appearances, and are once again the favorites to win the West. But the expansion Summit have their sights set on taking down the team at the top, and staking their claim as a top-level competitor in year one of their franchise. Colorado’s Jay Froude has made the AUDL semifinals in five of his six seasons as a pro, and will be pushing this young and talented Summit team towards their potential.

Week 10: Atlanta Hustle at Carolina Flyers
Other than the aforementioned DC-NY fracas, this might be the premier divisional rivalry in the league as both teams have championship aspirations in 2022. And with this matchup coming so late in the season, the winner figures to have an inside track on home field advantage for the playoffs, while the loser might have to battle to secure the number two seed in the South. Atlanta held a big second half lead on the road before the Flyers rallied in Week 11 last year, essentially igniting their title run.

Week 11: Salt Lake Shred at Portland Nitro
Two expansion teams who expect to be in the playoffs, this tilt in the final month of the regular season could be the firestarter of a new rivalry out West. The Nitro have a bit more known experience and talent on their roster, especially after the way Leandro Marx played in Portland’s preseason warmup. But All-AUDL Rookie First Team member Jordan Kerr and company are out to prove that they’re more than just an upstart team with potential—they’re a force to be reckoned with.

Week 12: Chicago Union at Minnesota Wind Chill
A reprisal of their Week 2 matchup, this late season contest will certainly have massive playoff implications both for the teams involved, and for the Central Division as a whole. Chicago completed six or more hucks in three out of their four games with Minnesota last season—all Union wins—and will look to continue to test the deep space with strikers Ross Barker and Paul Arters. The Wind Chill as a team were third in blocks per game in 2021, and were led by Dylan DeClerck, who tied for the league lead with 23. Which team’s strength can prevail?

Week 13: DC Breeze at Boston Glory
Boston looks like the odds-on favorite for the three seed in the East Division playoff picture. But without a win against a playoff team in 2021, Glory are still searching for their first quality win as a franchise. A Week 13 win against the Breeze would go a long way in proving Boston belongs at the top of the division. For the Breeze, the difference between a win and a loss at this juncture in the season could be the difference between hosting a playoff game, and having to go on the road.

Week 14: Portland Nitro at Colorado Summit
Defense comes at a premium in the West Division, so this final week matchup could turn into an offensive shootout with both teams gunning for a playoff spot. Portland showed already that they like to huck it early and often, putting defenses on their heels and making them adapt to the Nitro’s deep attack. But the Summit will have the home crowd at their back, which could prove pivotal in such a high intensity, emotional contest. 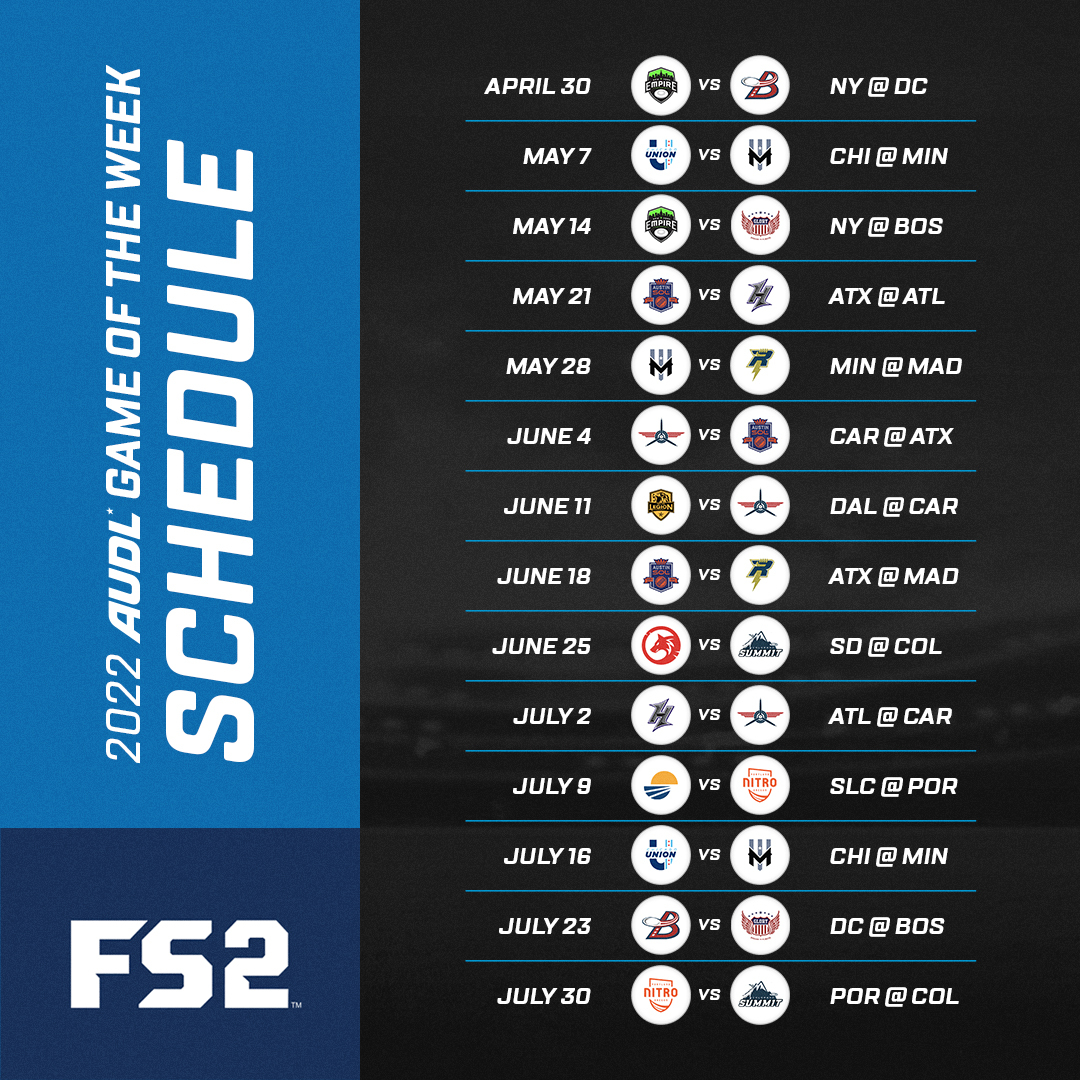