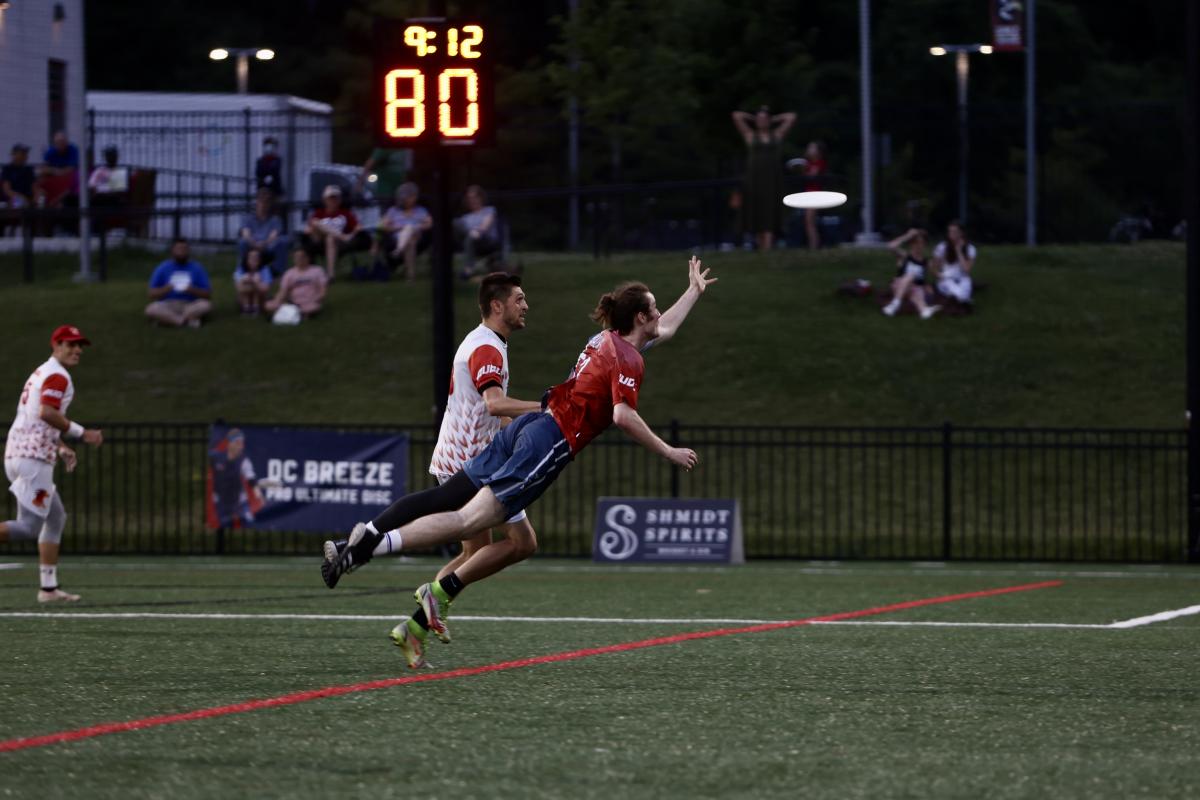 The DC Breeze are making their sixth straight playoff appearance and will host the Philadelphia Phoenix—a team in their first postseason since 2013—in the opening round of the East Division playoffs. Each of the first two matchups this season between these two Atlantic coast rivals ended in one-goal Breeze wins; Philly held fourth quarter leads in both games, but the DC O-line scored go-ahead goals in back-to-back weeks with under five seconds left in regulation. DC has a decided playoff experience advantage, but the Breeze are searching for their first postseason win since 2017. 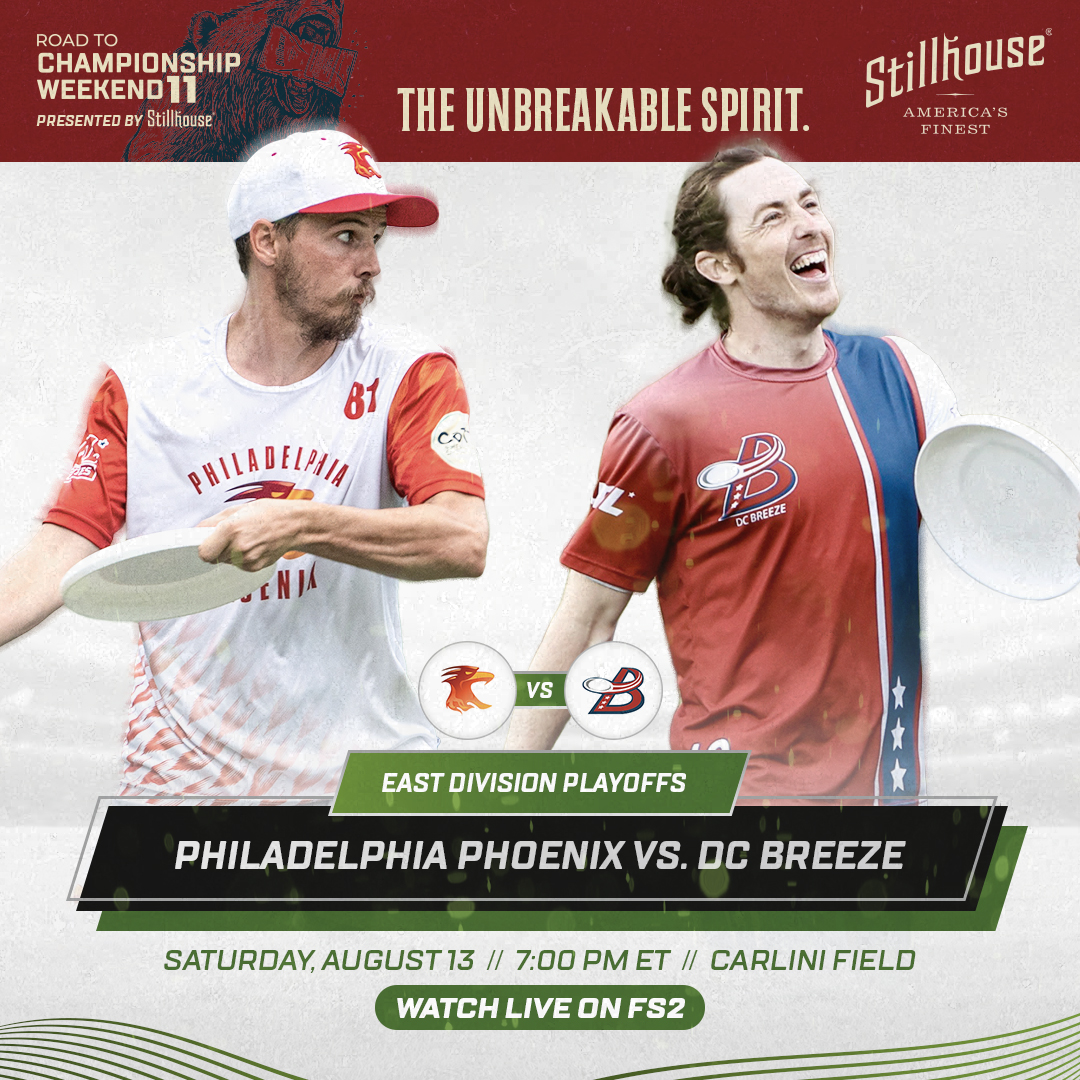 In their last matchup in Week 11 against the Breeze just over a month ago, the Phoenix offense had their best outing of the season, posting 24 goals and converting on a season-high 68 percent of their offensive possessions. Jordan Rhyne and Sean Mott combined for nine assists, 986 total yards, and over 100 completions, as the Philly offense balanced a robust deep game (8-for-11 on hucks) with possession-based drives; Rhyne and James Pollard had two huck completions apiece, with their deep throws keeping the DC defense honest all night.

Despite Philly’s impressive offensive performance, the Breeze D-line bested them with a brutally efficient counterattack, converting on 7-of-8 break opportunities despite earning just six takeaways on the game. AJ Merriman and Jeremy Hess both made highlight plays in transition, and emphasized DC’s efforts to run quickly off of their opponent’s turnovers. The Breeze may be surrendering a league-average 20 goals per game, but they’re an opportunistic group, ranking second in D-line break conversion efficiency. 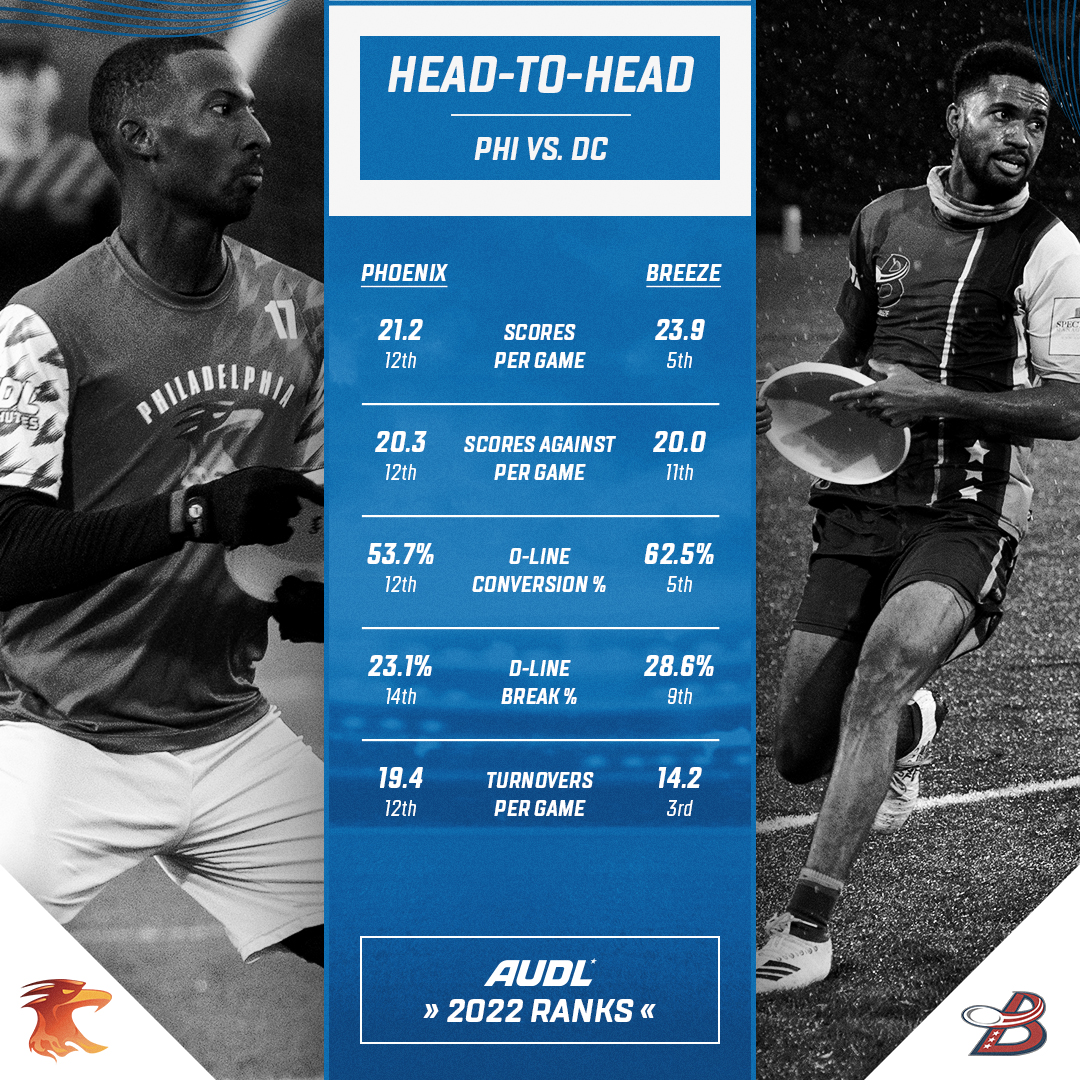 Two late fourth quarter Phoenix mistakes gifted the Breeze the disc, and the DC offensive unit was able to punch in clutch scores with under a minute on the game clock. Rowan McDonnell, Jonny Malks, and Jacques Nissen all finished with at least five scores and 496 total yards of offense against Philly, and orchestrated numerous successful drives in half field sets. As the team’s handling core, the trio represent one of the toughest challenges for opposing defenses, and are averaging a combined 9.3 assists, 850 throwing yards, and 107 completions per game in 2022; Malks and Nissen are only getting better as both throwers and field generals, and Rowan has resumed playing like his MVP self this season as one of the best and most creative mobile passers the league has ever seen.

The Phoenix defense did an admirable job of disrupting the Breeze offensive rhythm on July 8, holding the DC O-line to just a 56 percent offensive efficiency rate. But Philly converted on just 5-of-12 (42 percent) of their break opportunities, and yielded too many second chances back to DC’s offense. The hotbirds rank just 13th in defensive conversion efficiency for the season, which undersells how good the Philly defenders have been in matchup coverage. Paul Owens, Eric Witmer, and Max Trifillis have all made standout plays in the open field, and have combined for 35 blocks.

Philly is second to only Colorado in huck completions per game (9.9), and have five games on the season with 10 or more. The Phoenix have the playmakers in Rhyne, Pollard, and skylord Greg Martin to win discs and make big highlights, but with the team completing just 61 percent of their long distance throws, the hotbirds will not be able to afford their normal amount of mistakes against DC’s tenacious counter. Mott has been an unsolvable problem for the Breeze coverage schemes, and the seven-year veteran will play a huge role in his first playoff start after 83 career regular season games.

There is an undeniable tension between these two longtime foes as they prepare for their first-ever playoff meeting, and yet the Phoenix have not beaten the Breeze in their last 11 tries dating back to 2017; Mott finished with 28 completions and seven hockey assists without a turnover, threading the disc easily as a midfield distributor. Philly will likely need another pristine night from their local legend to deal with a DC team with championship ambitions.