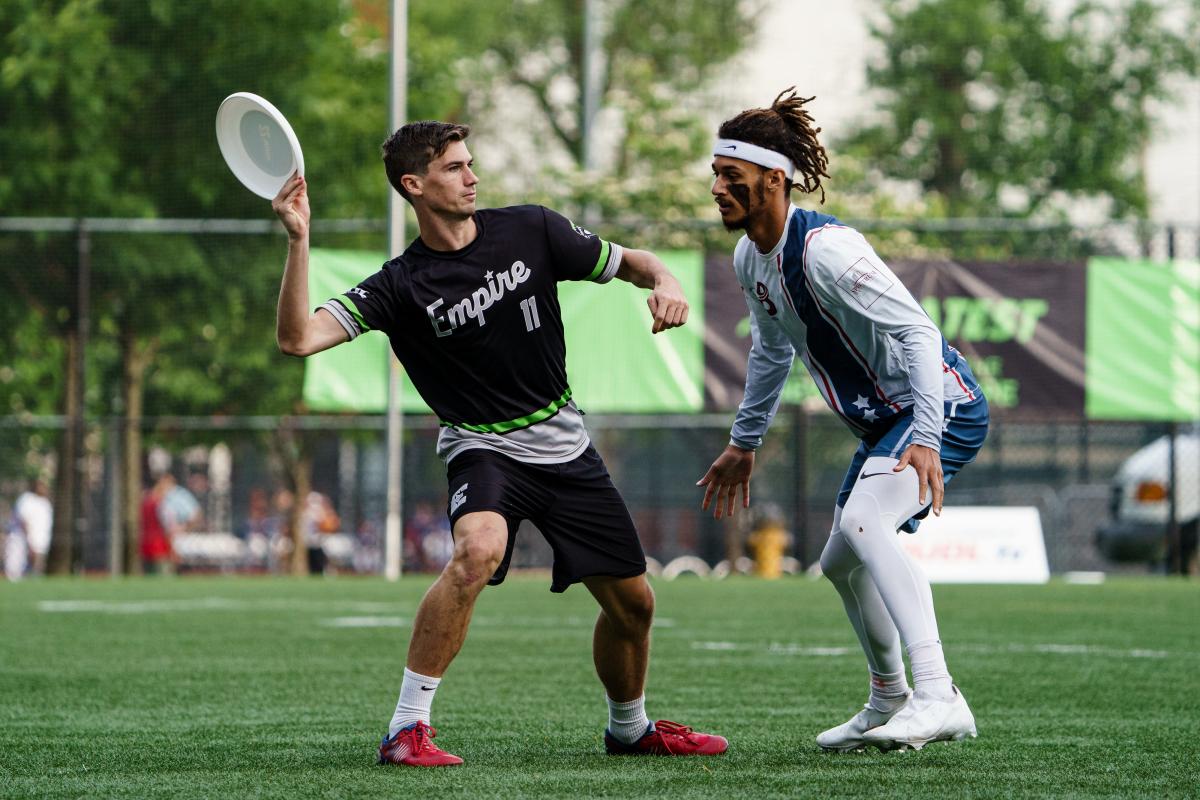 Entering this season, 11 of the past 22 matchups between the New York Empire and DC Breeze were decided by a single goal, often at the buzzer. That fierce history includes this season’s preseason exhibition thriller in Colombia, where New York escaped with a walk-off win on a John Lithio frozen rope to a speeding Ryan Osgar. But in nearly two dozen meetings, the two rivals have never met in an East Division title match before Saturday night’s “AUDL Game Of The Week” showcase. The stakes have never been higher as the Breeze attempt to make Championship Weekend for the first time in franchise history, and end the Empire’s perfect season. 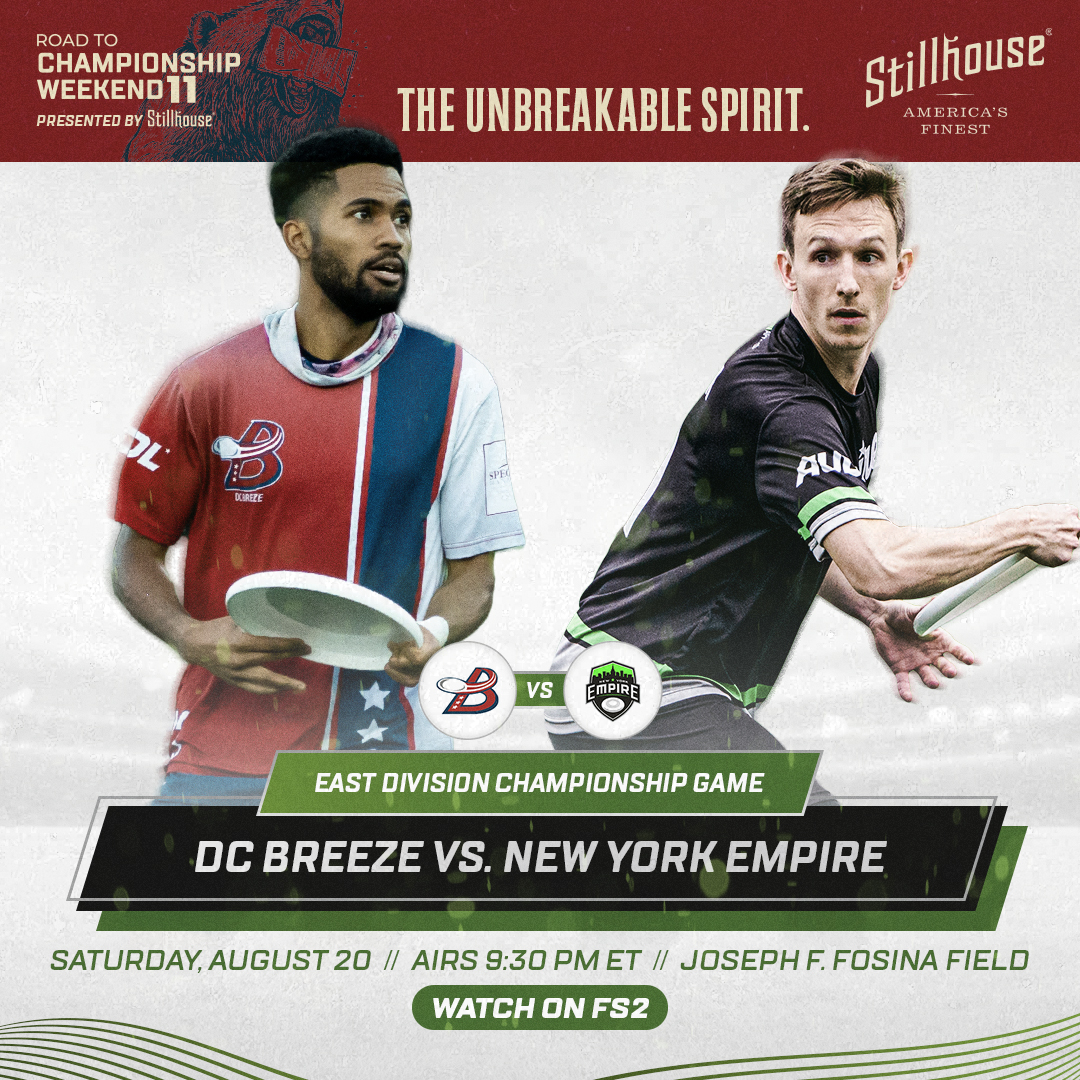 “I was happy with our ability to handle the DC pressure,” Osgar told Evan Lepler after New York’s most recent win against DC, a 25-21 victory in Week 7 at home against the Breeze. “They had a solid game plan and made us adjust multiple times throughout the game.”

Even with good defensive matchups and strategic adjustments, Osgar had a perfect performance, going 36-for-36 on throws from the field, and racking up seven total scores and nearly 500 yards of offense as the Empire smoothly converted 68 percent of their O-line possessions for the game. And that has encapsulated the Empire’s season: even against tough defensive competition, New York’s talent, balance, and depth allows them to remain constantly in rhythm; New York is the top scoring team in the league this season, and their offense set the all-time record for highest offensive efficiency. Osgar has headlined the show with his MVP-level play, but he is the tip of the spear for an attack that is anchored by Jeff Babbitt and Jack Williams, perennially two of the top players in the league; so loaded with MVP-like talent, actual two-time MVP Ben Jagt has spent the last half of the regular season unleashed as a defensive playmaker, puller, and counterattack weapon to great effect.

And as good as their galaxy of stars has been, what has really taken New York from runner-up in 2021 to overwhelming title favorites this season has been the play of their supporting cast, if you can really even call it that. The 6’5” John Lithio is a perfect downfield receiving counterbalance for Babbitt, and has been a nightmare for opponents to solve at times; accounting for the playmaking of Osgar, Williams, and Babbitt is a hard enough task, and Lithio has been exceptional at exploiting his matchups in single coverage; Lithio had seven assists, 12 goals, and 837 receiving yards in his final two games of the regular season. Charles Weinberg has also played superb in his first year with the team, and has natural chemistry with Osgar and Jagt from playing at Minnesota in college. A standout for the Wind Chill in their playoff appearance last season, Weinberg has been very effective in 2022 against the Breeze, completing 39-of-40 throws and generating over 600 yards of offense in two starts this season. Solomon Rueschemeyer-Bailey has turned into a reset handler android, completing 359-of-362 throws in his second season. There just are few if any weak spots in their offensive rotations. 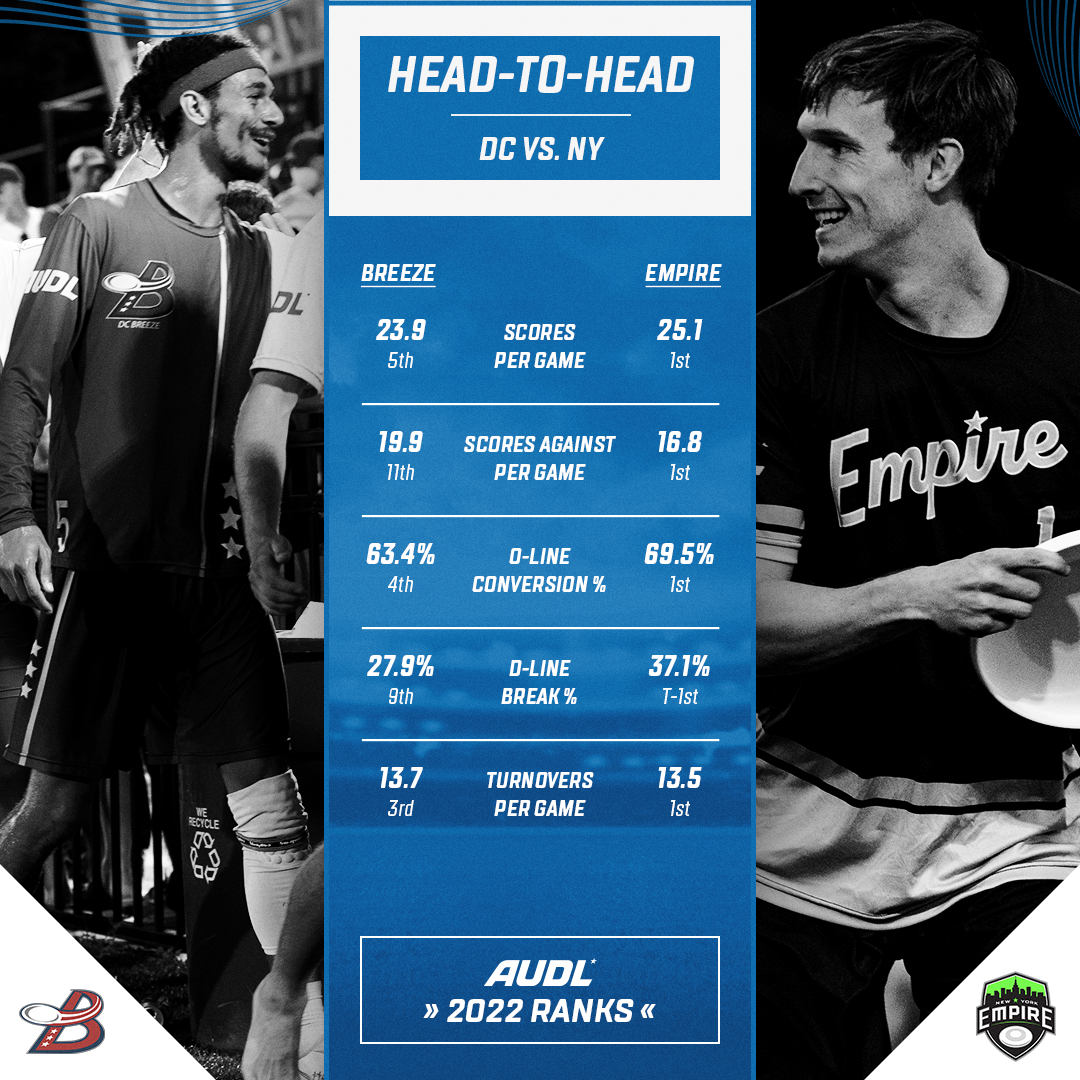 But for as good as the Empire have been this year, the Breeze have the defensive talent and ability to generate pressure and disrupt New York enough for break opportunities. The DC defense is the second best squad in the league this season at converting break scores, and despite the Empire committing just 19 total turnovers in two matchups during the regular season, the Breeze were able to convert 7-of-11 break chances. Just last weekend against Philly, the DC D-line was able to swing momentum when a Moussa Dia block was followed shortly by an AJ Merriman bomb for the score; Breeze have converted 50 percent or better on break chances in 11 of 13 games this season.

DC is also coming off of their lowest turnover game of the season, committing just seven throwaways and one drop against the Phoenix in the opening round of the playoffs. Jonny Malks, Rowan McDonnell, and Jacques Nissen initiate much of the action, but DC’s offense utilizes and weaponizes all seven of their offensive starters on the field better than any team in the league; Tyler Monroe and Christian Boxley have 109 scores and nearly 8,500 combined yards this season, and are two of the most effective continuation players in the league. Seven different Breeze throwers had 15 or more completions without a throwaway as the team completed 97 percent of their 296 throwing attempts. The Breeze lead the AUDL in team completion percentage this season, and have the fifth most efficient offense in league history.

“We’ve been talking about how we’re one of the better throwing teams out here,” said DC Head Coach Darryl Stanley in the “Tuesday Toss” after the efficient playoff performance. “That’s exactly what we’re gonna need to be able to do to beat New York.”

2018 was the last time these two rivals met in the playoffs in one of the rainiest games in league history. The Empire gutted out a 19-15 edge at the end of the third quarter against the Breeze, with neither team scoring for the entirety of the fourth quarter. New York advanced to face the Toronto Rush, defeated the five-time reigning East Division champs from Canada, and established their four-year reign atop the division; since winning against DC in their last playoff matchup, the Empire are 6-1 against the Breeze in the regular season.

New York is coming off an extended lull in their schedule, having played just three games since the start of July. DC has defeated every other challenger this season, and is carrying momentum after last Saturday’s downing of the Hotbirds. The Empire are on the verge of realizing their kingdom and their second undefeated season in three years, but the Breeze are committed for a breakthrough against their nemesis.