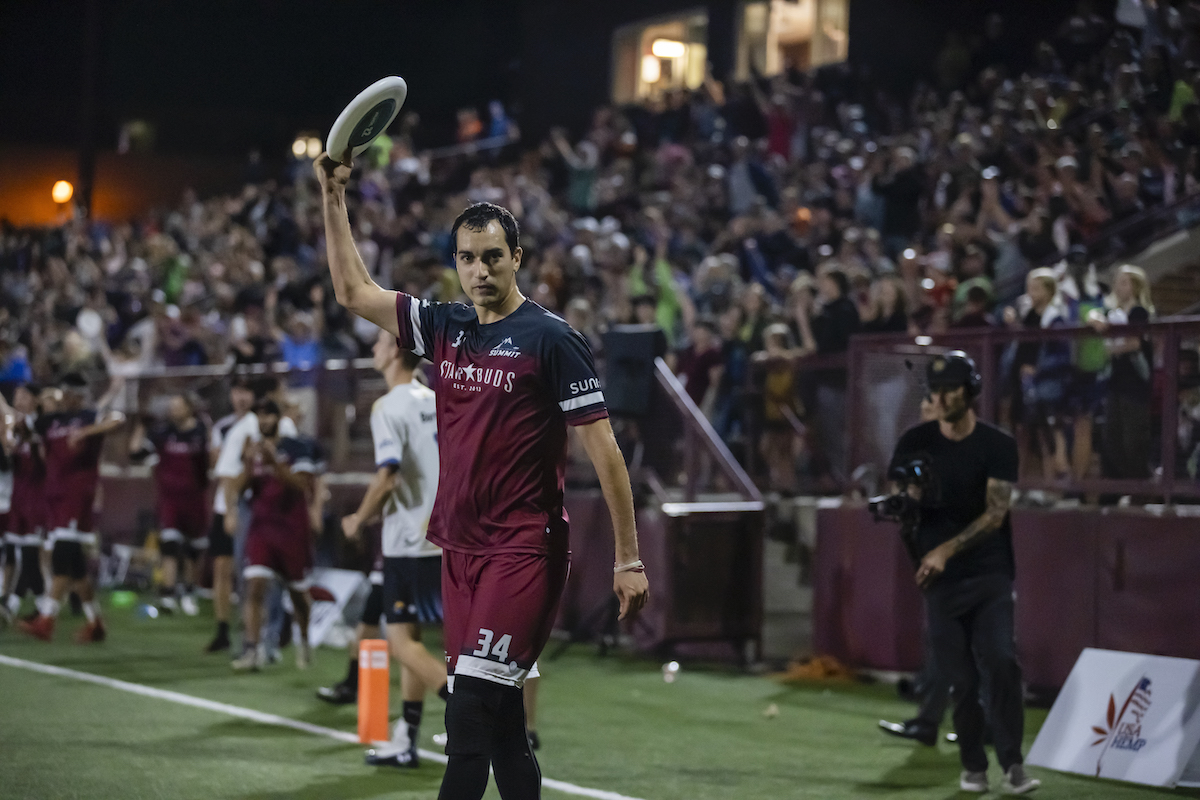 Two teams looking to advance to their first championship game, the Chicago Union and Colorado Summit will take the field in the first semifinal game of Championship Weekend 11. Both teams have a single loss this season and have identical season-long point differentials through 13 games (+68). 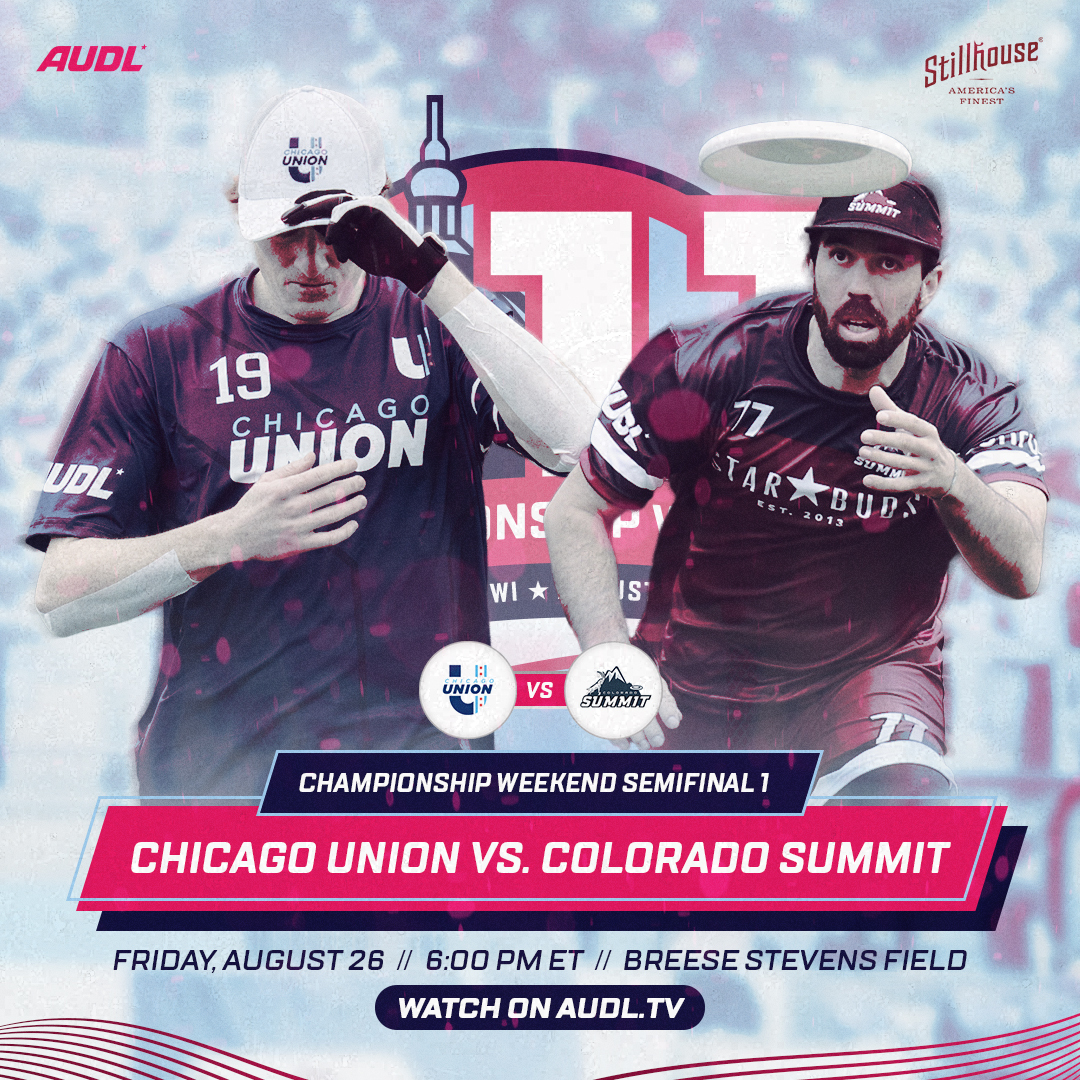 With two MVP candidates leading their respective offenses in Chicago’s Pawel Janas and Colorado’s Jonathan Nethercutt, each team’s O-line boasts top-five efficiency this season, but they’ve gotten there in pretty different ways. The Summit’s league-leading deep attack has produced some of the biggest plays of the season, with Nethercutt’s 37 completed hucks pacing the entire league. On the other side, the Union offense has stabilized in recent weeks to a more possession-based approach, slowly constricting their opponents by taking care of the disc and limiting opposing break opportunities.

After completing fewer than 300 throws in each of their first 10 games to start the season, the Union have now hit 300-plus completions in two of their last three, and they needed a total of just four completed hucks to win their last two games against Minnesota and Madison. Having previously relied on guys like Ross Barker, Jack Shanahan, and Jeff Weis to take advantage of continuation shots downfield, the Union have recently been excelling at taking what defenses are giving them; their well-rounded lineup of throwers allows them to freely rotate through the offense and simply hit the open receiver on each throw. 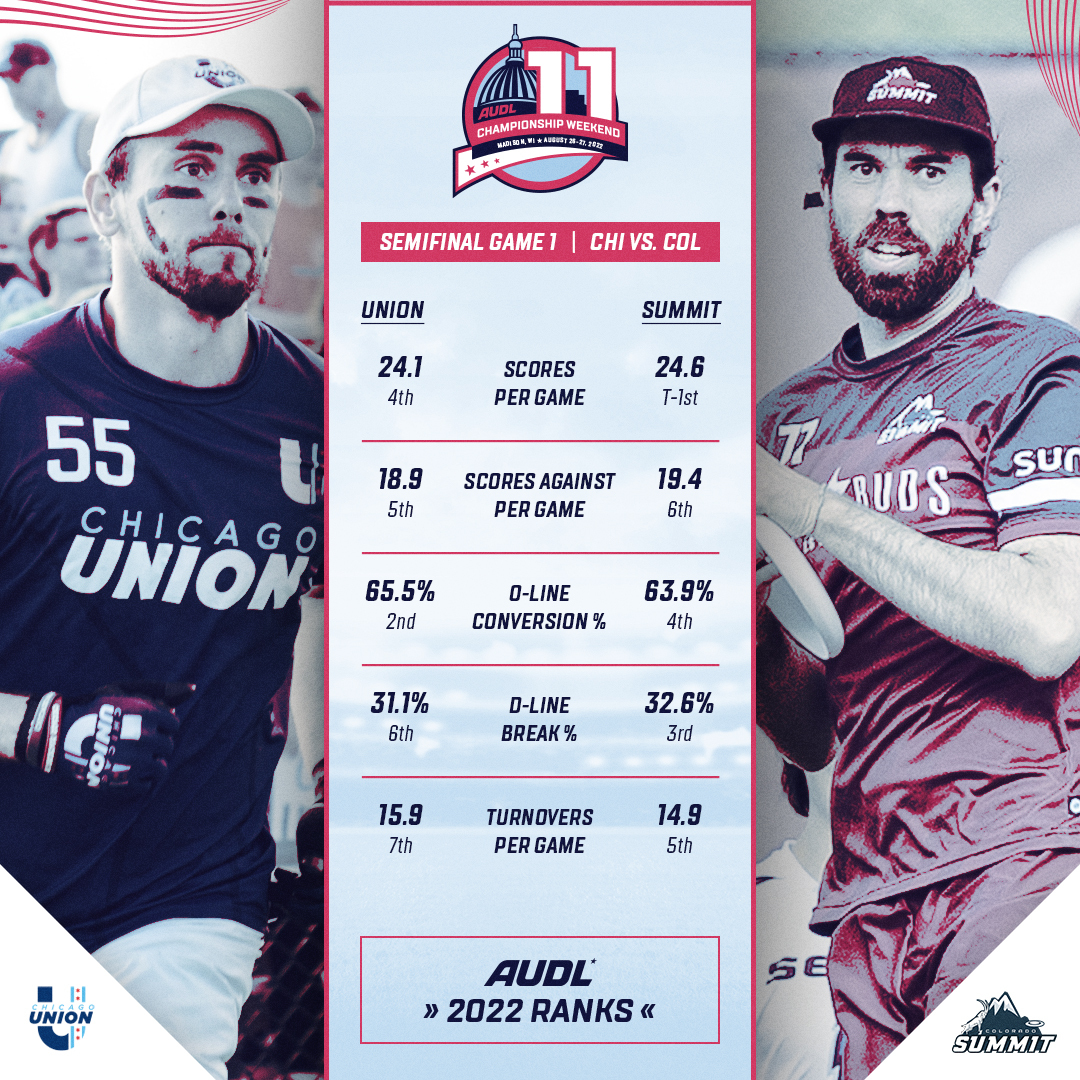 Sam Kaminsky and Kyle Rutledge have been perfect balancing pieces alongside Janas in the backfield, with all three showing impressive control with the disc in addition to picking their spots to release from the handler set. The offense has also gained one of the smoothest continuation throwers in the league in Paul Arters, who’s been reintegrated over the past month after missing a chunk of the year due to injury. All seven starters are comfortable with the disc in their hands, making it tough for defenses to key in on any weakness to force turnovers; the Union have held their opponent to six break chances or fewer in five straight games.

While they share a lot of similarities in personnel, with Colorado’s hybrid core of Danny Landesman, Quinn Finer, Jay Froude, and Matt Jackson rivaling Chicago’s Arters-Barker-Shanahan-Weis, the Summit have opted for a much more aggressive approach this season: score quickly, and efficiently. No team completes more hucks per game than Colorado’s 10.3—they’ve never completed fewer than eight in a game—and they’re completing these hucks at the fourth-highest rate in the league (67.3 percent). They’ve struck the ideal balance of maintaining an aggressive deep attack while limiting turnovers, and this huck-heavy system has them tied with New York for the highest scoring average in the league (24.6 scores per game).

Of course, the Summit D-line deserves its credit in the league-high scoring mark, as the Summit and Empire are the only teams in the final four with top-five efficiency both offensively and defensively. Led by top defender Cody Spicer, who’s shined as both a thrower and receiver after turnovers, the Summit D-line has punched in at least five breaks in every game but one this season (their loss to San Diego being the lone outlier). Mathieu Agee, Nicholas Snuszka, and Alex Tatum have shown consistent playmaking ability on both sides of the disc, and they give the Colorado defense a handful of weapons to throw at opposing O-lines, whether or not they have possession of the disc.

The Union D-line, on the other hand, has been a lot less consistent. On paper, the line features proven throwers and accomplished offensive studs (Tim Schoch, Dalton Smith, Joe White), x-factor defenders (Jace Bruner, Asher Lantz, Nick Pappas, Jason Vallee), and a gold-medal-winning defensive captain (Nate Goff). But after converting just 8-of-21 opportunities against Minnesota last weekend, the Union D-line is now converting under 50 percent of their break chances this season, lowest of any team at Championship Weekend. While they’ve looked promising at times this season, the current iteration of the D-line is a relatively new group, and they’ll need to show better poise offensively if they plan to take advantage of what few break opportunities they may have—Colorado has allowed their opponent an average of just 5.3 break chances over their last seven games.

With two high-powered offenses, the first semifinal matchup should feature plenty of scoring as the O-lines could trade scores from start to finish. Which team’s play style sets the tone for the game, however, remains to be seen as both Chicago and Colorado look to operate within their respective systems.