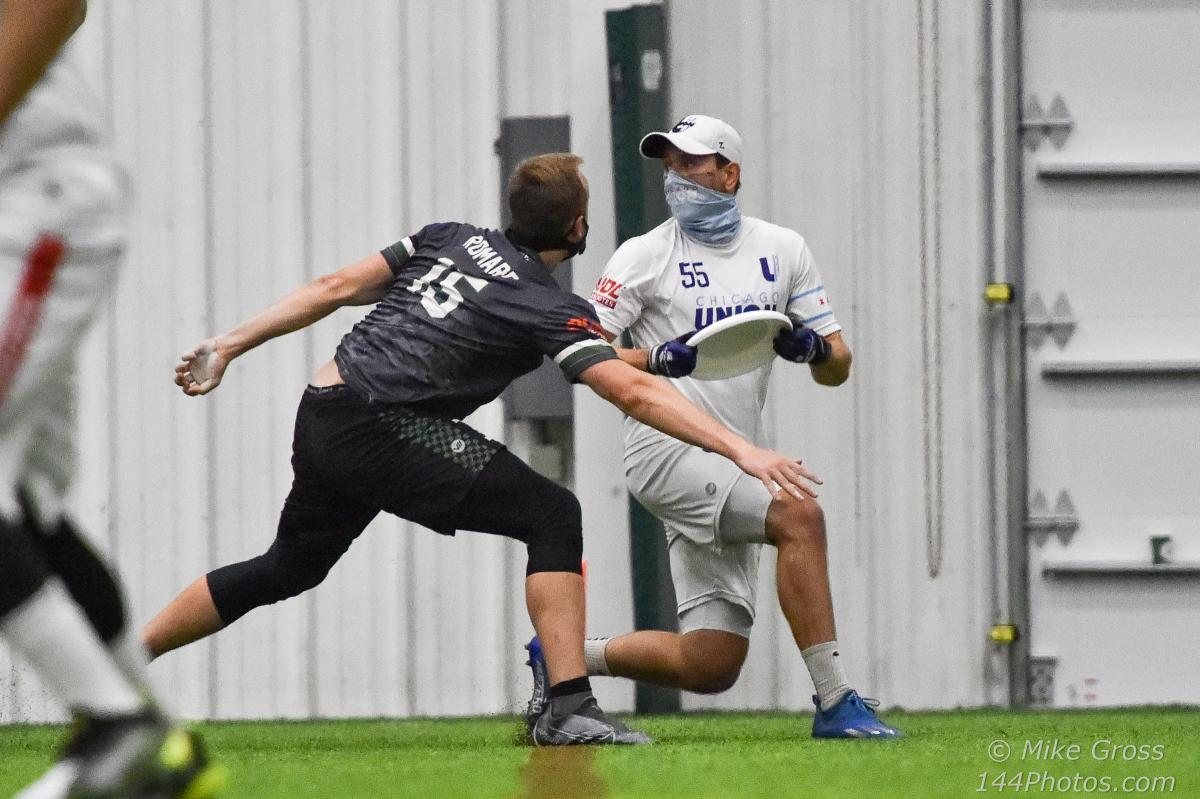 Rick Gross, Indianapolis AlleyCats
His team may be disappointed by its overall showing against Chicago on Saturday, but Gross’s production deserves adulation nonetheless. He completed all 36 of his throws, registering eight assists with two goals and two blocks, a rare +12 turnover-free masterpiece. From a yardage standpoint, he accumulated an amazingly balanced 279 throwing yards and 310 receiving yards, highlighting his hybrid excellence against one of the league’s best defenses. Despite Indy’s 2-3 record, Gross’s first double-digit plus/minus performance since 2018 suggests that the 26-year-old could be in store for a monster month of July as he aims to keep the Cats within striking distance of a Central Division playoff spot.

Pawel Janas, Chicago Union
The only player with more total yardage than Gross in Saturday’s Chicago-Indy showdown was Janas, who collected a remarkable 767 yards in the Union’s 28-20 victory, the highest number of anyone across the league in Week 4. Janas also tallied seven assists, scored three goals, and completed all but one of his 41 throws. The AUDL’s assist leader in each of the past three seasons, Janas again paces the circuit with 22 assists at the end of June. Even more importantly, his team is 4-0, winning every game by five or more. By the end of July, Janas will almost certainly become the fourth player in AUDL history with at least 300 assists, a feat that’s even more stunning considering that he’’ll likely reach that plateau in roughly half the number of games as Keenan Plew, Goose Helton, and Cam Harris, who currently are the only three members of the 300-assist club.

Paul Lally, San Diego Growlers
With the game tied and just over a minute remaining, Lally thought he had a point block on Dallas’s Chase Cunningham near the goal-line, only for the ref to call a foul. Undeterred, he kept battling and snuck in for another D, laying out by the sideline to swat Ben Lewis’s up-liner and get the disc back for his team. Later in the same point, his inside-flick break was the hockey assist that set up Goose Helton’s go-ahead toss to a sliding Jesse Cohen for what became the Growlers’ game-winning goal. His heroics on this penultimate point were possibly enough to earn him an Honor Roll slot regardless, but his contributions for the full 48 minutes were massively important too. Lally led the Growlers with 573 total yards and 40 completions, anchoring the San Diego offense that the Roughnecks only broke three times in four quarters.

Chris Mazur, Dallas Roughnecks
Just in case anyone forgot, Mazur quickly reminded everyone that he’s one of the game’s elite O-line leaders with his dynamic performance throughout the Roughnecks west coast weekend. In two games, Mazur racked up 11 assists, three goals, one block, and 88 completions with just two turnovers, an exceptional display especially when you add in his 790 throwing yards, 441 of which came against the Growlers on the second night of a back-to-back. These contributions are even more impressive when you consider that Mazur had not played or practiced with the Roughnecks since a minicamp weekend prior to the canceled 2020 season. His commanding presence, maybe even more than his super steady throws, was critical to the shorthanded Roughnecks very nearly pulling off the weekend SoCal sweep.

Ben Sadok, Boston Glory
The AUDL’s leader in total yards through four weeks, Sadok delivered another impactful performance in Boston’s 24-17 win over Tampa Bay, throwing for 425 and leading the Glory offense against the Cannons. In fact, no other Boston player passed for even 140 yards on Friday night, a strong indication of just how important Sadok’s chunk throws were. He also was second on the team with 204 receiving yards and completed 39 of his 40 tosses, paving the way for the Glory to get back on track and snap their three-game losing streak.

Ben Snell, Seattle Cascades
With three goals, four assists, and seven hockey assists, Snell was prominently involved in half of Seattle’s 28 scores, the largest offensive output for any Cascades team since the 2018 season. In handing the Austin Sol their first loss of the year on Friday night, Snell combined with Manny Eckert on several big plays in the fourth quarter, critical moments in the quelling of Austin’s late-game rally. A key member of the Cascades’ 2016 team that went all the way to the championship game, Snell’s veteran presence in the lineup makes Seattle that much scarier for any opponent in the wildly competitive West Division.

John Stubbs, Atlanta Hustle
In just his second AUDL game, Stubbs continued to illustrate his ridiculous combination of skill and consistency. Unsurprisingly, his poise and purpose in a dominant fourth quarter also helped keep the Hustle undefeated. Stubbs finished a game-high +9, with four of his seven assists coming in the final 12 minutes against the Phoenix. Atlanta led Philly 16-15 after three, but dominated 8-2 down the stretch to pull away for the comfortable 24-17 win. Stubbs threw for 290, caught 195, and finished a perfect 29-for-29 with no turnovers for a Hustle team that’s now 4-0 for the first time in franchise history.