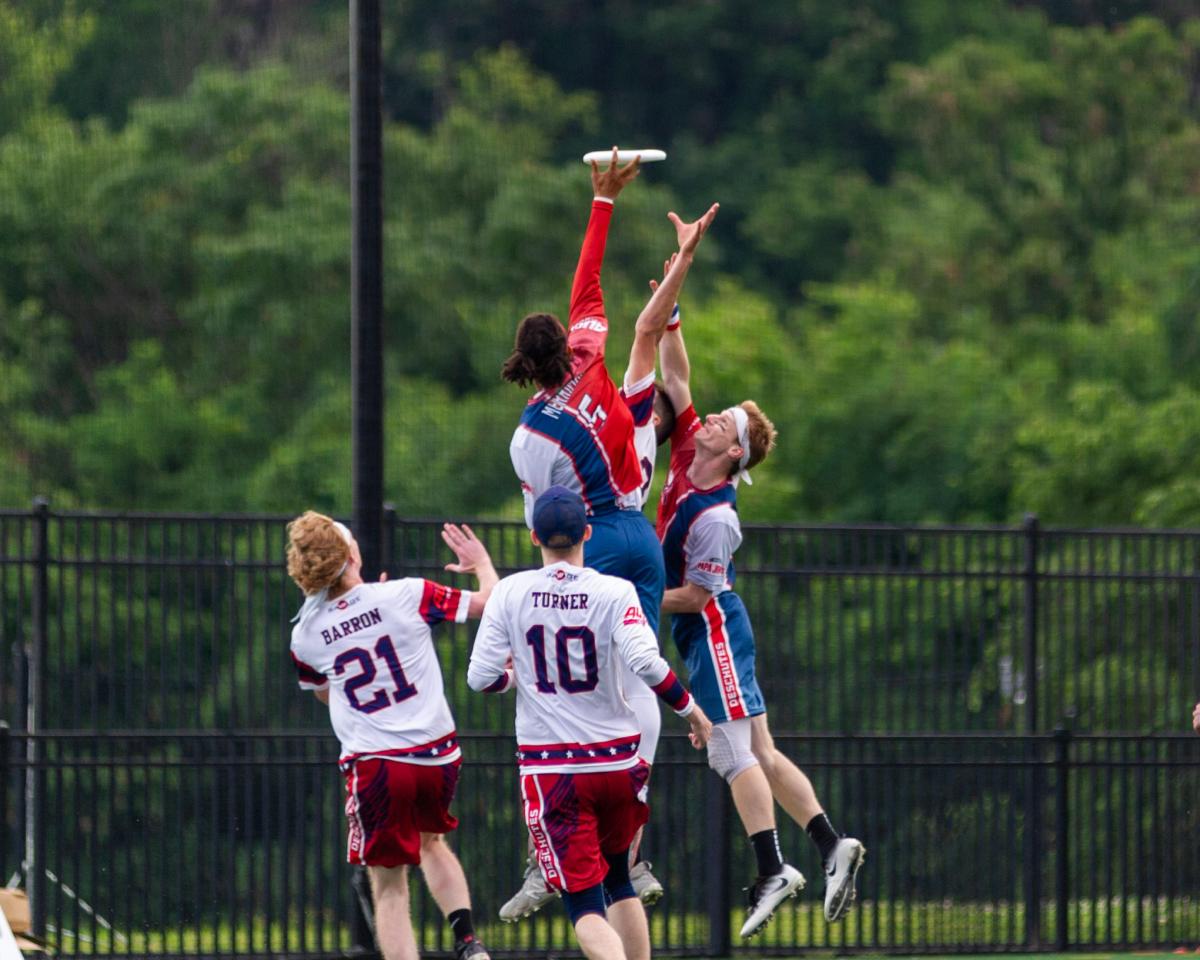 Joey Cretella, Raleigh Flyers
With the threat of a third straight loss to begin the Flyers’ season looming like a dark cloud, the experienced Cretella helped will Raleigh to a strong fourth quarter and a 27-24 triumph on Saturday night against Boston. The veteran defender registered two clutch blocks in the final 12 minutes, both swinging the momentum back in the Flyers’ favor. Always an impactful and disruptive D-line cog when he’s available, Cretella has registered multiple blocks in four of his last six regular games played, dating back to 2019.

Cole Jurek, Minnesota Wind Chill
After scoring just three goals in his first two games, Jurek delivered the signature scoring performance that Wind Chill leaders had long expected in Friday’s home win over Madison. The 23-year-old cutter caught six goals to lead his team, but even more importantly also finished with a game-high 335 receiving yards. “He’s finally getting back up to speed coming out of Covid and his hamstring injury,” said Minnesota Coach Ben Feldman. “Opening up space for the whole offense with his cuts.”

AJ Merriman, DC Breeze
It was a magical Friday night for the entire Breeze organization, but no one rode the wave of success—and contributed to it—like the 20-year-old Merriman, who registered a career-best +9 playing exclusively defensive points. With three blocks, five assists, and one goal, he played a huge part in DC’s D-line going 12-for-14 in break chances. His yardage totals, 180 receiving and 176 throwing, may not stand out amongst all players in the game, but when you narrow the scope to just D-liners, Merriman paced his colleagues by a healthy margin in both departments, while also playing turnover-free throughout his 24 points on the field against the Glory.

Greg Martin, Philadelphia Phoenix
Throughout the full 12-game schedule across the AUDL this past weekend, no one racked up more receiving yards (in a single contest) than Martin, who churned for 455 across his 20 receptions, six of which went for goals, in Philly’s comfortable 27-18 victory over Pittsburgh. Martin also chipped in three assists and a block while completing all 14 of his throws, tabulating a career-best +10 performance, the first double-digit plus/minus effort for a Phoenix player since Sean Mott’s +12 against Toronto on May 26, 2018.

Sean McDougall, Los Angeles Aviators
It’s rare for a player to rise into the Honor Roll conversation during an 0-2 weekend, but McDougall’s performance is worthy considering his downfield receiving was massively important in giving the Aviators a chance to win. He led not only his team, but all competitors across both teams, in receiving yards for both of his games in Texas, accumulating 322 on Friday in Dallas before going for 406 on Saturday in Austin. In both games, McDougall’s total was more than a 100-yards beyond the next-closest gainer. He also scored six goals, dished six assists, and registered three blocks on the weekend, while throwing for 358 yards too.

Nate Pettyjohn, San Diego Growlers
While the Growlers were notably signing past AUDL champions, All-Stars, and other players with established pro ultimate experience around the league heading into the season, inking a rookie like Pettyjohn might have been the most significant addition of all. In a pair of road victories at San Jose and Seattle, Pettyjohn recorded seven goals, three assists, and two blocks, while grinding for 364 receiving yards across the two games. Although the Growlers offense has had its ups and downs during the team’s 3-1 start to the season, Pettyjohn has maintained a 100 percent completion rate, connecting with a target on each of his 32 passes through four games.

Zach Norrbom, DC Breeze
The rules state that the Honor Roll is a recognition for individuals, which is the only reason that “DC’s O-line” isn’t listed here collectively. The Breeze protected possession better than any team all season on Friday night against Boston, with only seven turnovers for the full 48 minutes. The nine primary dudes on the O-line combined to go 214-for-218, a 98.1 percent completion rate that includes a Rowan McDonnell turnover in the closing seconds of the first quarter when he attempted a desperation off-balance full-field huck into the swirling wind. In fact, Jacques Nissen had an errant huck earlier that point, meaning that the Breeze O-line had just two turns on their other 20 points. Norrbom gets the individual recognition for his team-high 322 throwing yards while going 32-for-32 with four goals, three assists, and one block, but the story for the Breeze was the entire offensive unit, which has only been broken once in its last six quarters.