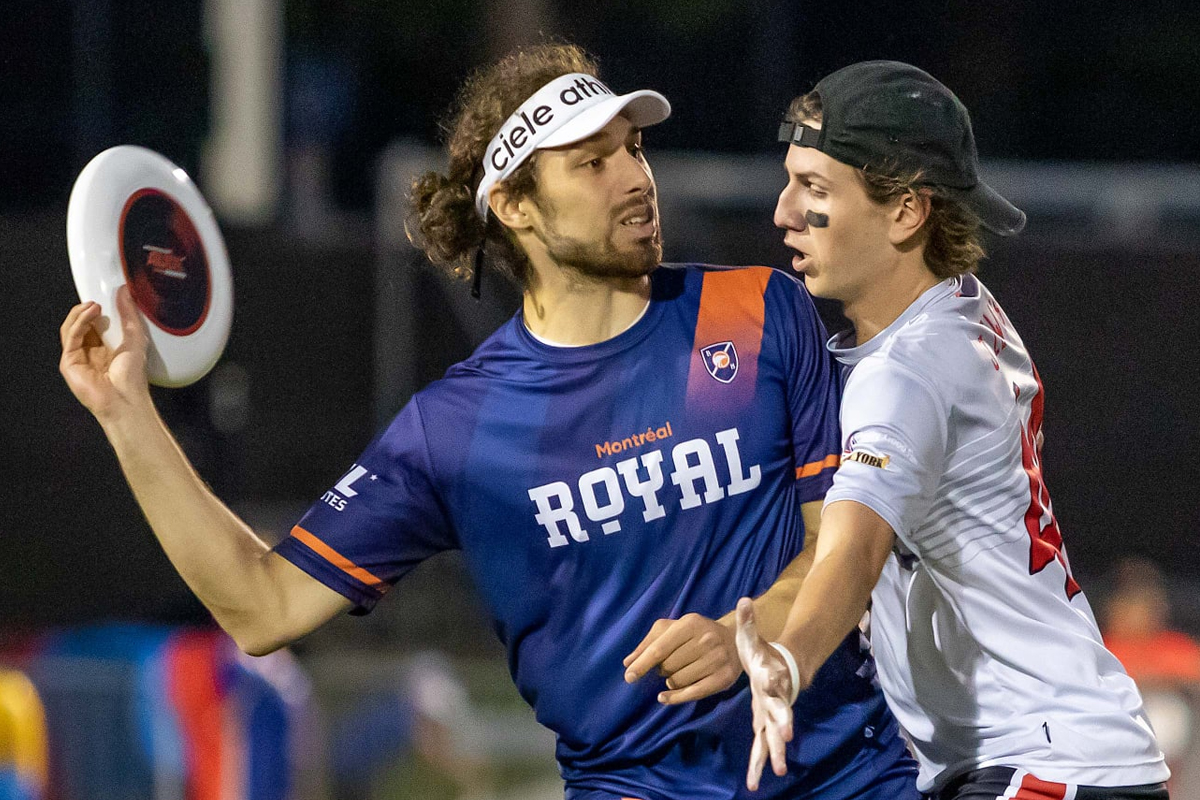 Due to travel restrictions at the US-Canada border, the league’s three Canadian teams—the Montreal Royal, Ottawa Outlaws, and Toronto Rush—were unable to compete in the standard 2021 AUDL season. As a result the Canada Cup was born, bringing a new competitive format to Canada; each of the three teams would play an eight-game regular season against the other two, with the top two teams ultimately advancing to the Canada Cup Championship.

Historically, there has always been a clear hierarchy in Canada. Toronto won an AUDL title in 2013, and heading into 2021, they were six wins away from becoming the first team in AUDL history to reach 100 wins as a franchise. Montreal was typically a middle-of-the-pack team in the East, having made the playoffs twice in their six seasons of play, and holding a .476 all-time win percentage. Ottawa had yet to record a winning season in their five seasons of play, and they had yet to defeat Toronto in 15 previous meetings.

In the first week of Canada Cup action, Ottawa announced that 2021 was going to be different. Taking on Toronto and Montreal in a doubleheader weekend, the Outlaws took down the Rush for the first time in franchise history in a high-scoring 27-24 win. Their offense looked flawless, with Nick Boucher leading the charge in a record-setting performance; Boucher totaled 1,223 yards of offense, the highest single-game yardage total of 2021 in either the Canadian or US series. The offensive firepower continued the next day against Montreal, as Ottawa came away with a decisive 26-19 victory. 2019 All-Star Alec Arsenault and third-year Outlaws cutter David Colic formed a strong one-two punch downfield, while Boucher showed impressive control for the second straight game. The Outlaws were the only team in 2021 to score 25-plus points in both games of a doubleheader weekend; the 2-0 start was also their first in franchise history. 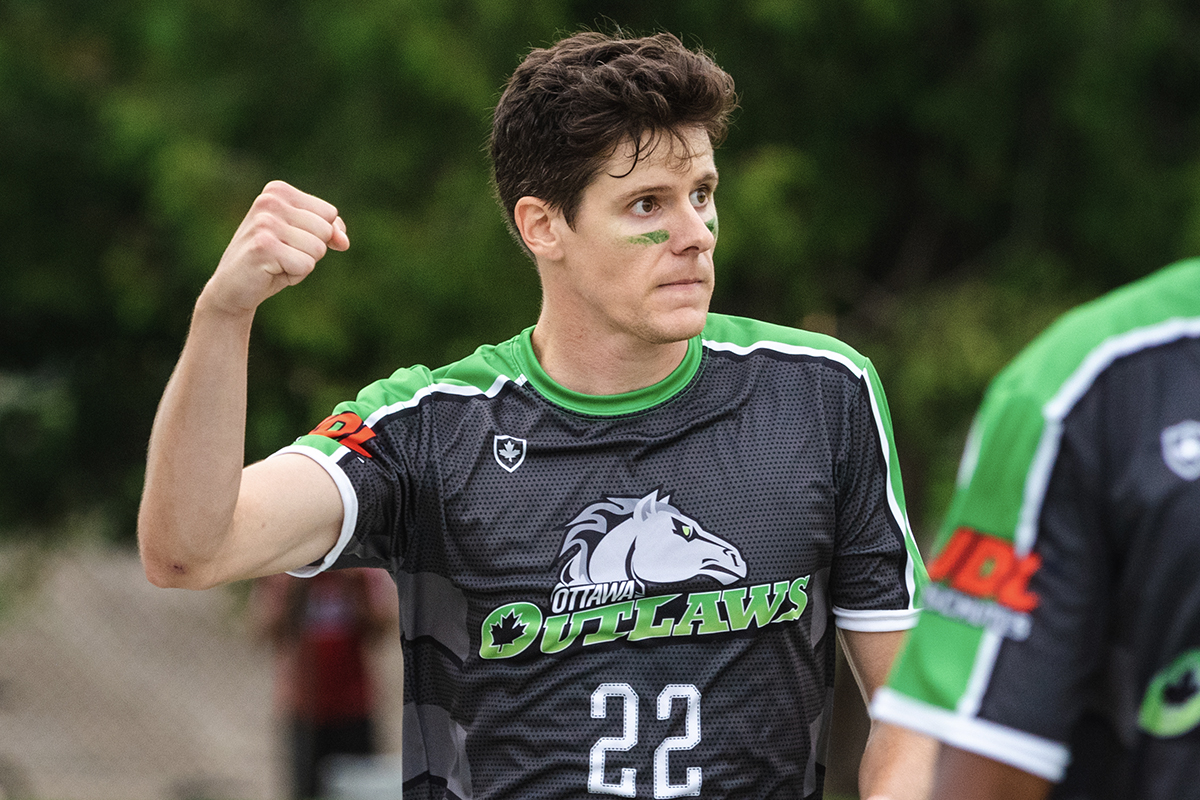 Two weeks later, Montreal responded with an undefeated weekend of their own, taking down Toronto 18-16 before traveling to Ottawa the next day for their first rematch with the Outlaws. Boucher was out with an injury, and the offense suffered; after converting on nearly 70 percent of their offensive possessions through their first two games, Ottawa converted just 40 percent against Montreal. On the other side, the Montreal offense looked strong. Second-year handler Jakob Brissette announced himself to the league as the Royal’s top option in the backfield, throwing for nearly 600 yards and tossing nine assists. Sacha Poitte-Sokolsky, another second-year Royal player, scored eight more goals to bring his total to 20 through three games, filling in nicely for 2019 AUDL goals leader Quentin Bonnaud, who was out for the season with an injury. Rounded out by an arsenal of throwers in Miguel Goderre, Kevin Quinlan, and Vincent Lemieux, the Royal offense boasted more collective throwing talent than either of their two opponents, allowing them to stay in constant rhythm and beat defenses in a variety of ways. Montreal emerged victorious for the second day in a row, defeating Ottawa 22-18.

Riding the momentum of back-to-back wins, the Royal rematched the Outlaws four days later—the lone Thursday game of the regular season—and came away with an 18-16 win in front of their home crowd. The Royal defense was coming together, as they’d held their opponent to 18 or fewer points in three straight games after allowing 26 in Week 1. Christophe Tremblay-Joncas and Andre Arsenault had combined for 16 blocks over Montreal’s first four games, and as a team they were averaging 12.8 takeaways per game, which would’ve ranked second in the league in 2021.

The Royal continued their win streak with a 20-19 win over Toronto, dropping the Rush to an 0-3 start. For a team that had never finished with a losing record in their seven-year history, the winless beginning to Toronto’s 2021 campaign was a shock, to say the least. They were, however, integrating a lot of younger players into their system for the first time. Franchise staples Cam Harris and Andrew Carroll were still playing roles in the offense, but that was about it for their older established vets. Luc Comire, Jason Huynh , Mike Mackenzie, and Wilkie Lewis all took on expanded roles on the O-line despite limited prior experience. Though they looked far from their historically dominant selves, the Rush had lost by three or fewer goals in each game and rarely looked outmatched.

The day after their third loss, the Rush played their first home game with fans in the stadium against the Outlaws. Trading scores early, the game was tied at 10 in the second quarter before the Rush scored two straight and didn’t look back from there; they held a lead the rest of the game, as the new energy in Varsity Stadium was enough to spark the first Rush win of the season. For the Outlaws, the loss marked their third straight after their 2-0 start, though they remained on pace to take on the Royal in the Canada Cup Championship.

The Royal’s fifth win of the season clinched their Canada Cup Championship berth, as they took down Toronto for the third time the following week in Montreal. Still, Toronto put up a fight, going on an 8-3 run in the fourth quarter to nearly come back after a seven-goal deficit after three quarters; Montreal had yet to beat Toronto by more than two goals. The 25-23 Royal win featured another strong performance from Montreal’s throwers, as well as their counter attacking defense—the team completed 13-of-16 (81.3 percent) hucks on the day and recorded a season-high nine breaks against Toronto. 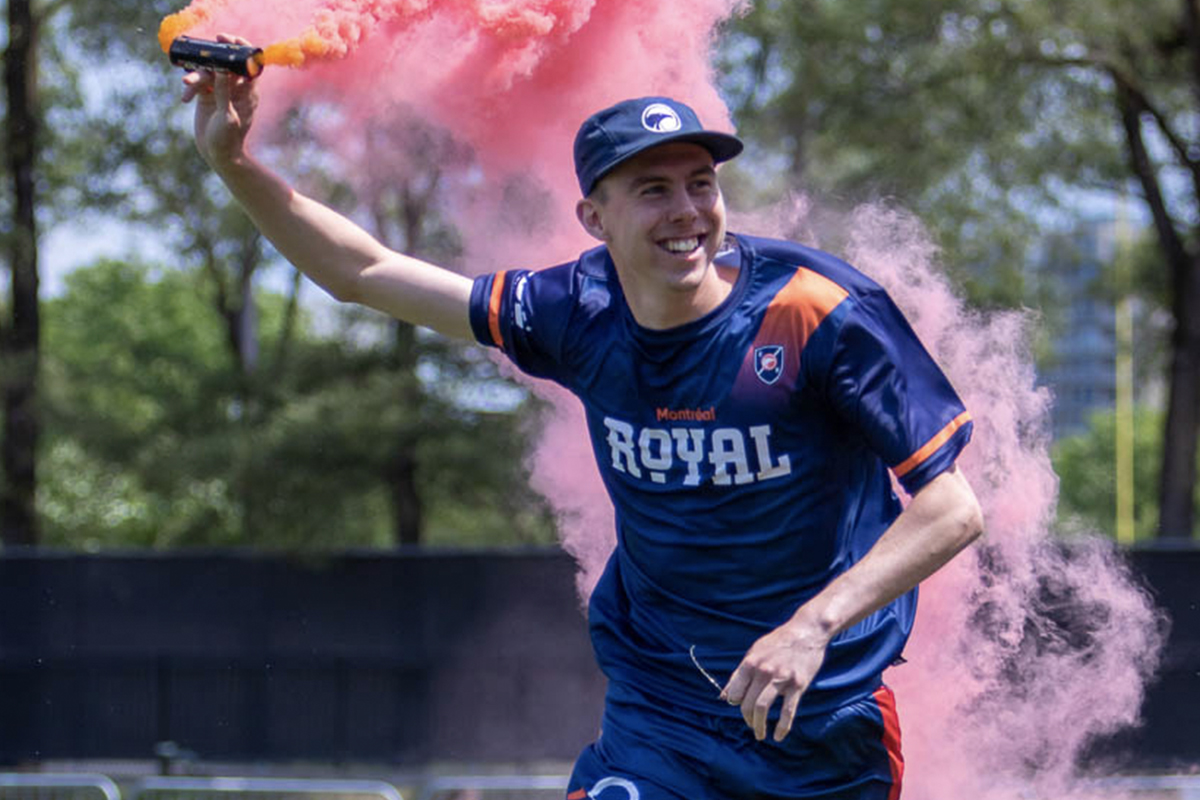 The next day, Ottawa finally got back to their opening weekend form in another high-scoring battle against Montreal. After a back-and-forth first quarter, Ottawa opened the game up in the second, starting the quarter with two breaks and earning a third later on to put them up 10-6. Montreal managed to cut the lead to three with a break of their own before half, and continued clawing back after halftime to eventually tie the game back up in the fourth quarter. At 23-23, Greg Ellis hit a tumbling Matt O’Brien for the go-ahead score, then the next point rookie Brandon Adibe secured a floating crossfield flick for the dagger break score; the Outlaws would improve to 3-3 with the 25-24 win.

For Ottawa, two games remained in the regular season, both against Toronto. If they were to win just one of the games, they’d advance to the championship. If Toronto won both, the Rush would have the tiebreaker over the Outlaws with both teams at 3-5.

Their third meeting of the season was the biggest blowout of the Canada Cup and, unfortunately for the Outlaws, was reminiscent of many past meetings between the two teams. Toronto came out and stomped Ottawa 23-13, as the Outlaws turned the disc over a season-high 29 times while the Rush defense recorded their highest takeaway total (16) of the season. Third-year Rush vet Phil Turner tallied two more blocks to bring his season total to 14 in six games; Turner developed into an elite deep defender in 2021 and eventually finished as the AUDL’s league leader in blocks per game (2.3). 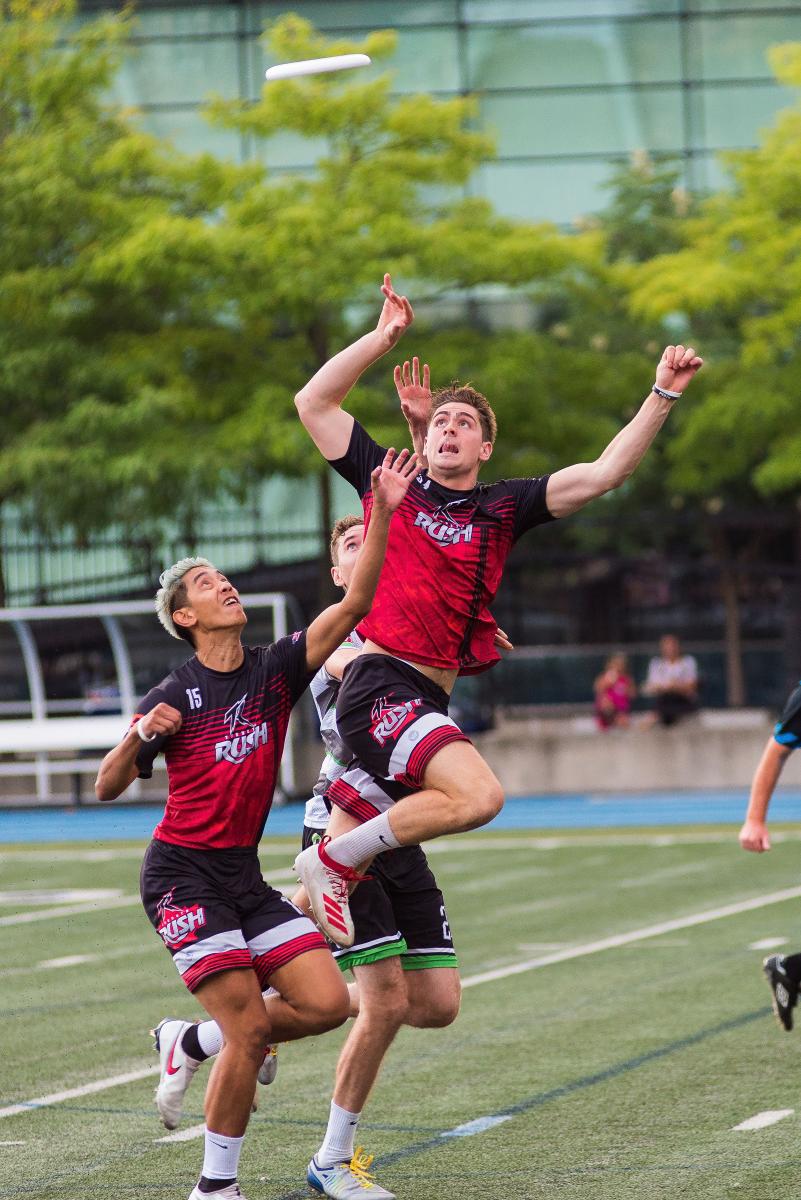 The Toronto win set up what was essentially a playoff game between the Rush and Outlaws. And who do the Rush lean on but the guy who had played 15 career playoff games, all with Toronto: Cam Harris. With eight assists, two goals, and over 1,000 total yards of offense, Harris put the team on his back to will the Rush to the inaugural Canada Cup Championship Game. He scored the first Toronto goal and the defense took advantage of break opportunities early to take a 7-4 lead at the end of the first quarter. Despite another efficient offensive performance, the Outlaws were never able to come back from the early deficit, and Toronto held off a late comeback attempt to escape with a 24-22 win.

The Thursday before AUDL Championship Weekend, the Rush and Royal met in Montreal to crown a Canada Cup champion in front of nearly 1,500 fully vaccinated fans. With wet, rainy conditions that eventually led to a mid-game weather delay, limiting turnovers was a top priority for both teams. They traded scores early, with each team earning a break apiece in the first half. From start to finish, the score stayed within two goals. After trailing by two with just over half a quarter remaining in the game, Montreal broke Toronto to tie the game up at 16s, then after back-to-back holds, Toronto’s Luc Comire was stalled on the sideline to give Montreal another break opportunity. Following a timeout call, Kevin Quinlan found Miguel Goderre on a crossfield flick to put the Royal up 18-17 with just over three minutes remaining in the game. After Wilkie Lewis flew for the cleanup grab on the ensuing Rush possession, Montreal’s game-winning goal came from the hands of Kevin Quinlan in the form of a huge crossfield hammer to Malik Auger-Semmar in the back of the end zone. 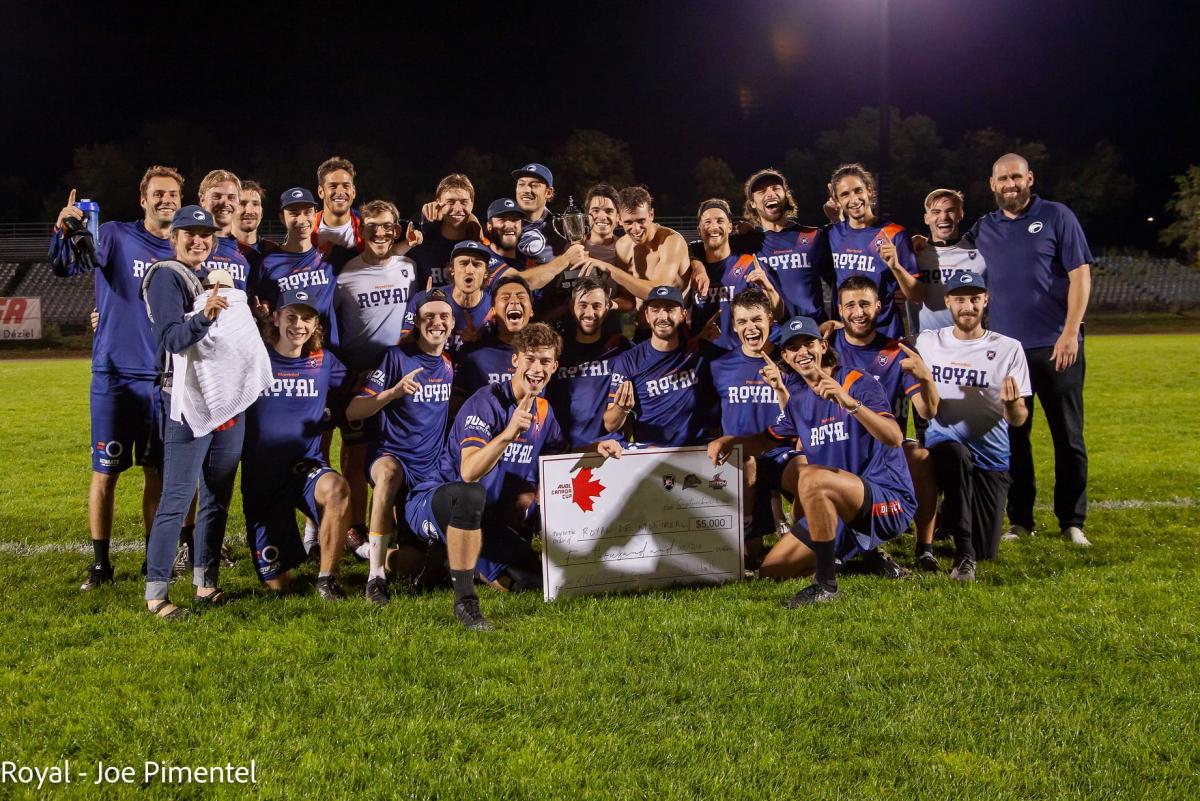 Both teams finished with 15 or fewer turnovers, the only such game of the entire Canada Cup series. The Royal’s 5-2 run to end the game sparked the sixth consecutive win for Montreal over Toronto dating back to the 2019 season. The new era in Canada had officially begun; Toronto’s reign had ended.