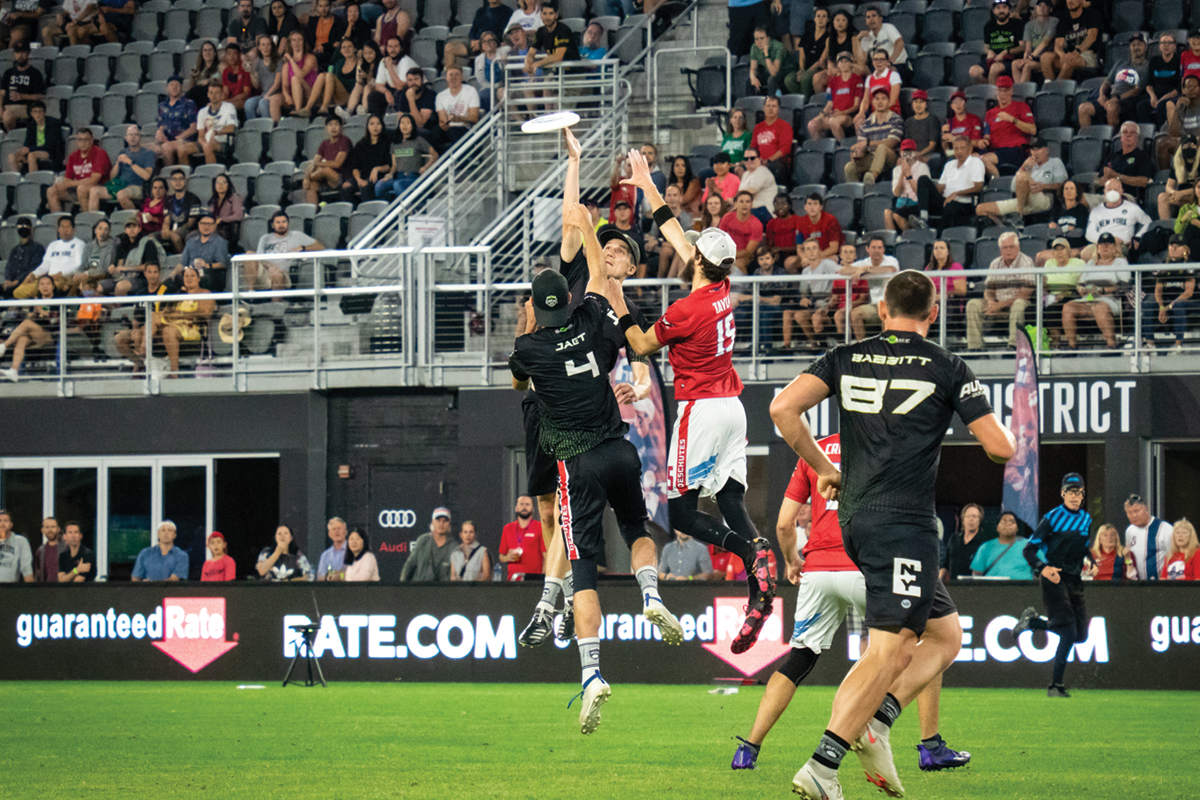 Eight teams. Four playoff spots. For an Atlantic Division that featured four 2019 playoff teams from three different divisions, a retooled Atlanta Hustle squad, and the never-before-seen Boston Glory, this season was always going to be a gauntlet. From Week 1 onward, AUDL fans were spoiled with a collection of some of the best regular season games in recent history.

The first game of the season was a tone-setter. After losing to the New York Empire by exactly one goal in their last two meetings of 2019, the DC Breeze traveled up to New York in another attempt to finally beat the unbeaten. It was immediately apparent the DC offense was going to look different this year, opting for a handler-heavy possession-based approach rather than running the offense through 2018 MVP Rowan McDonnell, as they had the previous two seasons. The Norrbom brothers, Gus and Zach, alongside McDonnell and Jonny Malks showed great patience and control of the disc throughout the game; DC turned the disc over just nine times in the game, fewer than they had in any game the previous season. On the other side, despite a couple big offseason losses, the New York offense looked just as comfortable. New addition Ryan Osgar played like an all-star in his Empire debut, while rookie John Lithio perfectly complemented Ben Jagt downfield. Most notably, Jack Williams showcased his hybrid versatility through the final buzzer, when he skied the pack in the end zone for the game-winning walk-off score.

The next day featured two more highly anticipated games in the Atlantic: Boston Glory at Pittsburgh Thunderbirds, then Raleigh Flyers at Atlanta Hustle. In their first game as a franchise, Boston came away with a 29-21 statement win over a 2019 playoff team playing in front of their home crowd. Ben Sadok and Tanner Halkyard combined for six assists and six goals while the defense consistently forced and profited off turnovers. In Raleigh vs. Atlanta, a vastly improved Hustle defense featuring new additions in Michael Fairley and Jakeem Polk held the Flyers to just four goals in the first half. Raleigh responded in the second, as they managed to force overtime despite trailing 15-17 with under three minutes remaining in regulation. The extra period belonged to Matt Smith, who posterized Terrence Mitchell in the end zone for the first goal, then tossed a cheeky scoober on the goal line to put the Hustle up 19-18. On Raleigh’s final possession, Atlanta’s Brett Hulsmeyer, who had allowed nothing in the deep space all game, intercepted a crossfield look five yards outside the end zone, sealing the upset win for the Hustle.

Atlanta kept momentum going into Week 2, earning a two-goal win over Boston after locking down the Glory offense in the fourth quarter. The following day, the Tampa Bay Cannons handed Pittsburgh their second loss in as many games, then the true headliner of the week came when DC traveled to Raleigh to take on the Flyers in the Game of the Week. The Breeze O-line again looked seamless, with Joe Merrill and Joe Richards founding the J & J Roofing Co. downfield and two second-year hybrids in Jacques Nissen and Garrett Braun playing pivotal roles in the middle of the offense. Jonny Malks officially announced himself as an early-season MVP candidate, totaling over 600 yards of offense, and nine scores without a turnover. Though again, just as they had with Atlanta in Week 1, Raleigh stuck with their opponent. The Flyers frequently overwhelmed the DC defense with their hybrid-heavy attack, as Eric Taylor, Allan Laviolette, Anders Juengst, and Jacob Fairfax all finished with four-plus scores in the game. But at 19-19 heading into the fourth, the Breeze D-line came alive for two breaks to start the quarter, and the Breeze were able to coast to a 25-24 road win.

The Breeze defense was beginning to take form, and their signature performance came in a 32-20 victory over Boston in Week 3. As good as their offense was in the game—they scored on 20 of 25 offensive possessions—the defense stole the show. AJ Merriman exploded for one of the best all-around individual performances of 2021, racking up three blocks and over 350 yards of offense with six scores on just 10 offensive touches. The Bergeron brothers, Quinn and Rhys, combined for five blocks and the D-line converted a total of 12 of 14 break opportunities. DC looked like the best all-around team in the league, and it came as little surprise—although in part due to a few notable absences on the New York roster—when the Breeze finally defeated the Empire 20-17 the following week to end their 18-game win streak. 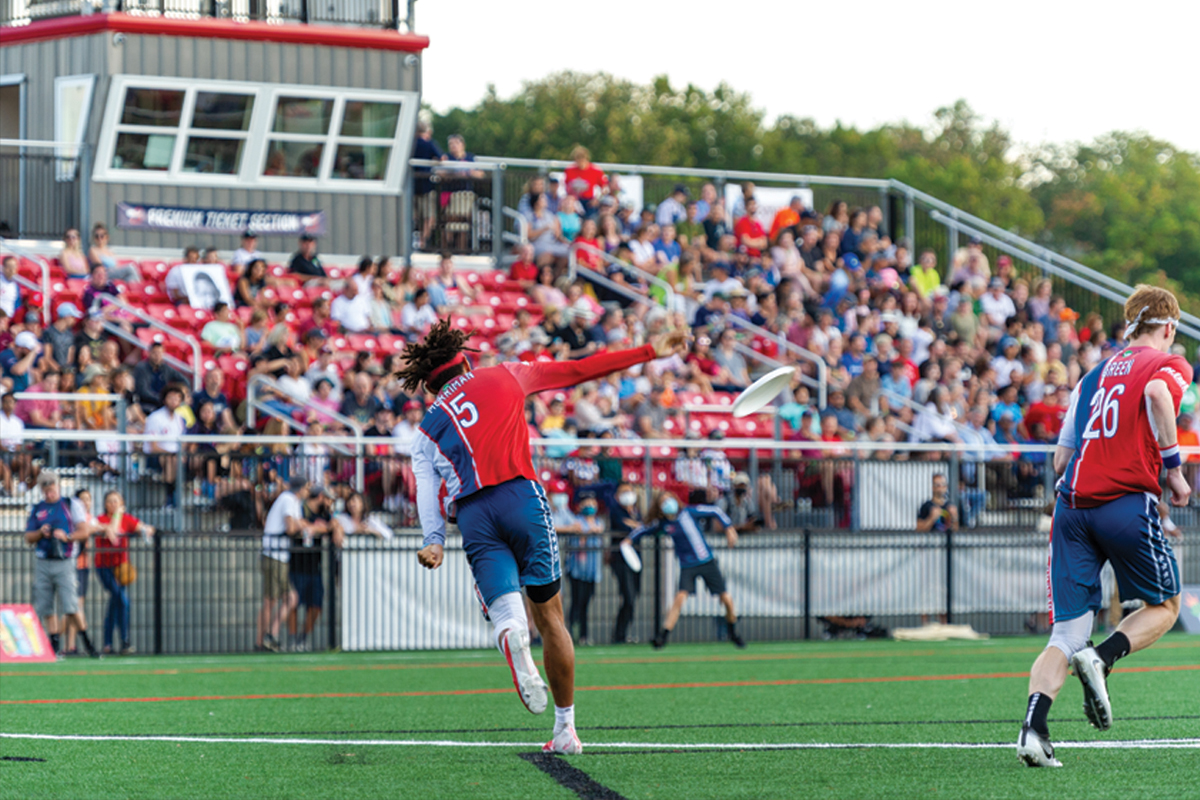 In Week 6, a week after DC dethroned the champs, Atlanta stood as the last remaining undefeated team in the league and were set to host DC for the first time in team history. It was a matchup between highly efficient possession-based offense and suffocating zone defense, and the offense won out. Malks put on one of the best throwing displays of the year, Atlanta struggled to get anything going offensively against a lock-down DC defense, and the Breeze won easily 19-14.

The Week 7 rematch, however, was an entirely different story. Atlanta traveled to DC this time, and immediately the effects of their zone defense were apparent. DC was no longer hitting the throws they did the week before, their offense was out of rhythm, and the zone forced so many throws that DC could never get back in the game. The Breeze attempted 436 throws in the game, most by any team in a game in 2021, and only one of two instances of a team attempting 400-plus. The 17-13 Hustle win restored some balance to the Atlantic, bringing DC back down to earth after their hot start. 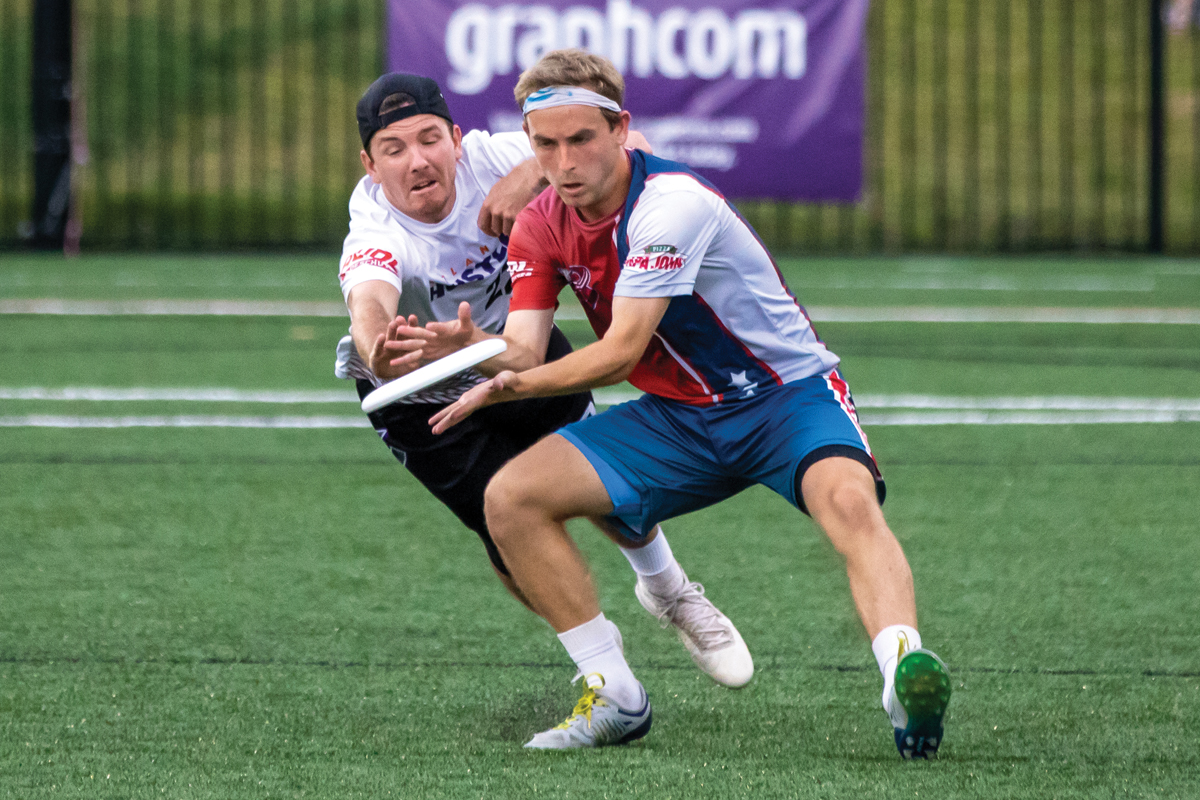 After a not-so-hot start with two losses to begin the season, the Flyers quickly started rolling through the division as their schedule opened up. They beat Boston 27-24 at home for their first win of the season, then proceeded to win their next four games all by double digits to get to 5-2. Two more wins over Pittsburgh and Boston had them sitting at 7-2 heading into an early August game against New York, a rematch the ultimate world had been waiting for since their iconic double-overtime meeting in 2019. The two teams didn’t disappoint, as they traded scores throughout the game; no team held a lead of more than three goals at any point. Down by one with time winding down in regulation, Raleigh went the length of the field in about 20 seconds to send the game to overtime, and the end-of-game heroics were only just beginning.

Up 23-21 with possession with 37 seconds left in overtime, Raleigh just needed to complete a few throws to win the game. New York had other plans. First, Ben Jagt nearly caught a Callahan on the crossfield hammer attempt out of the double team trap, allowing New York to score in eight seconds. The next point, the Empire threw another double team trap and again the crossfield hammer was deflected, this time by Ben Katz. New York went the length of the field and Jack Williams punched in the game tying score to force double overtime. With momentum having drastically swung in New York’s favor, they closed out double overtime on another clutch play by Williams, as he hit Jeff Babbitt with a skinny inside break for the game-winner. 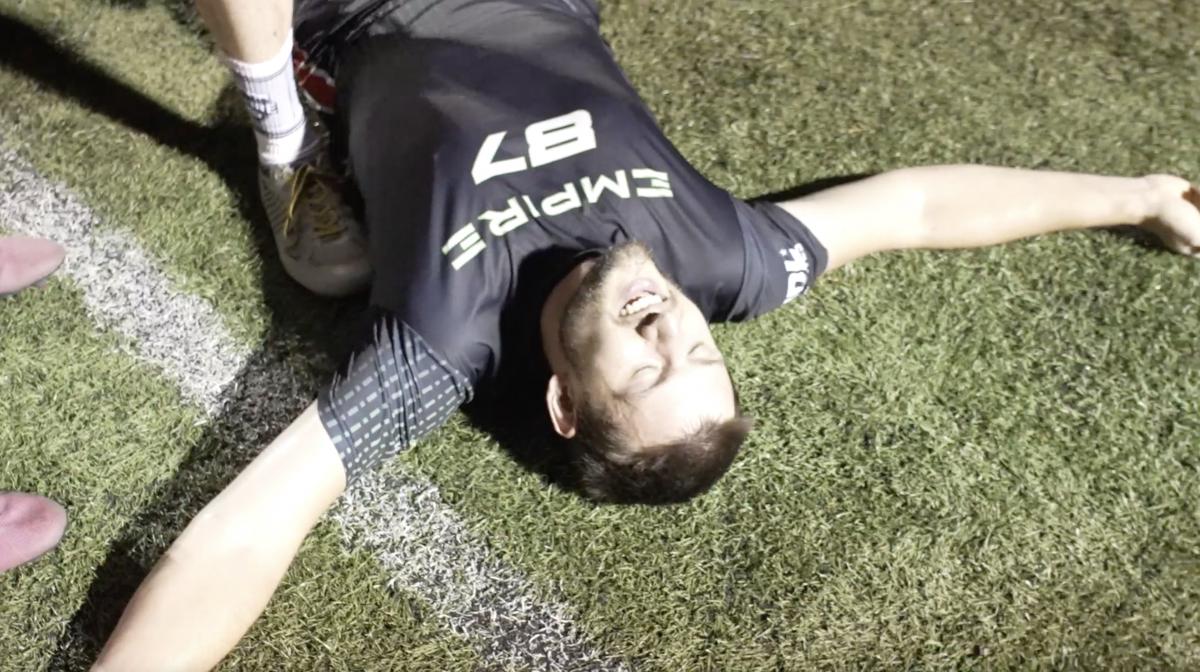 After the crushing loss, Raleigh bounced back in a big way against Atlanta. Despite being down 16-11 with a quarter and a half left to play, the Flyers rallied late to close out the game on a 9-2 run. Raleigh optimized the usage of Elijah Long and Eric Taylor, each of whom played near 50/50 splits of O-points and D-points in the win. Their next game against DC featured both players playing primarily defense, as the Flyers looked to stop the potent Breeze offense. As was the case with their first meeting, the teams traded scores throughout with patient offense and punchy break conversions. Breeze defenders shined late in the game, with Rhys Bergeron flying for the block of the year and rookie Luke Rehfuss denying the Flyers at the end of the first overtime period. In double overtime, the Breeze took 27 throws to march downfield and secure their second win over Raleigh.

The Flyers finished the regular season 8-4 with four one-goal losses. Their postseason campaign began with a trip to DC, two weeks after their regular season finale. Raleigh went down 8-4 early, but they were able to claw their way back by halftime on the strength of four second quarter blocks by the D-line. Tied at 13 heading into the fourth quarter, Raleigh closed the game out with two fourth quarter breaks to punch their ticket to Championship Weekend in a 19-16 win.

The next day, New York and Atlanta rematched in the second Atlantic Division playoff game—Atlanta had previously beaten New York 22-21 in their first meeting of the season—and the Hustle got off to as dominant a start as we’d seen from them all year. Their fast-paced huck-heavy offense paired with an aggressive D-line gave the Hustle a 12-8 lead at halftime. Austin Taylor was hitting every deep look, the defense converted nearly every break opportunity, and Atlanta could seemingly do no wrong. In the second half, New York turned to their stars. Jack Williams and Ben Jagt were on the field for basically every point, playing both ways as they tried to keep their season alive. Managing to tie up the game late in the fourth, Ben Jagt went into full MVP mode in an 18-18 game with 12 seconds remaining, laying out in the end zone for a game-saving block on an Austin Taylor huck. In overtime, it was the closer, Jack Williams, who tossed up a 75-yard bomb into a pack to find Ryan Osgar for the walk off buzzer beater.

New York carried their momentum into their semifinal game versus San Diego and steamrolled past the West Division champs; the Growlers never led at any point in the game. Raleigh had a much tougher path to the 2021 AUDL Championship Game, sneaking past Chicago in the first overtime game in Championship Weekend history after overcoming a two-goal deficit with just over two minutes remaining in regulation.

The Saturday night stage was set for an Atlantic Division championship between two teams that had only ever gone to double overtime in two previous meetings. New York, looking to become the second team ever to win back-to-back titles, started the game with an immediate break after an errant throw from Allan Laviolette. Basically from that point onward, Raleigh had control of the game. Their zone defense disrupted the high-powered New York offense, while their offense was as patient as ever; the Flyers turned the disc over just three times on O-points. New York didn’t go away, keeping the game within two goals until the final moments of the fourth quarter, but eventually the Flyers’ efficiency was too much to overcome. After a David Richardson club smash punctuated the final goal of the game, the Flyers celebrated their first AUDL championship in franchise history with a 19-16 victory. Raleigh’s seven turnovers marked the fewest in any Championship Weekend game in AUDL history. 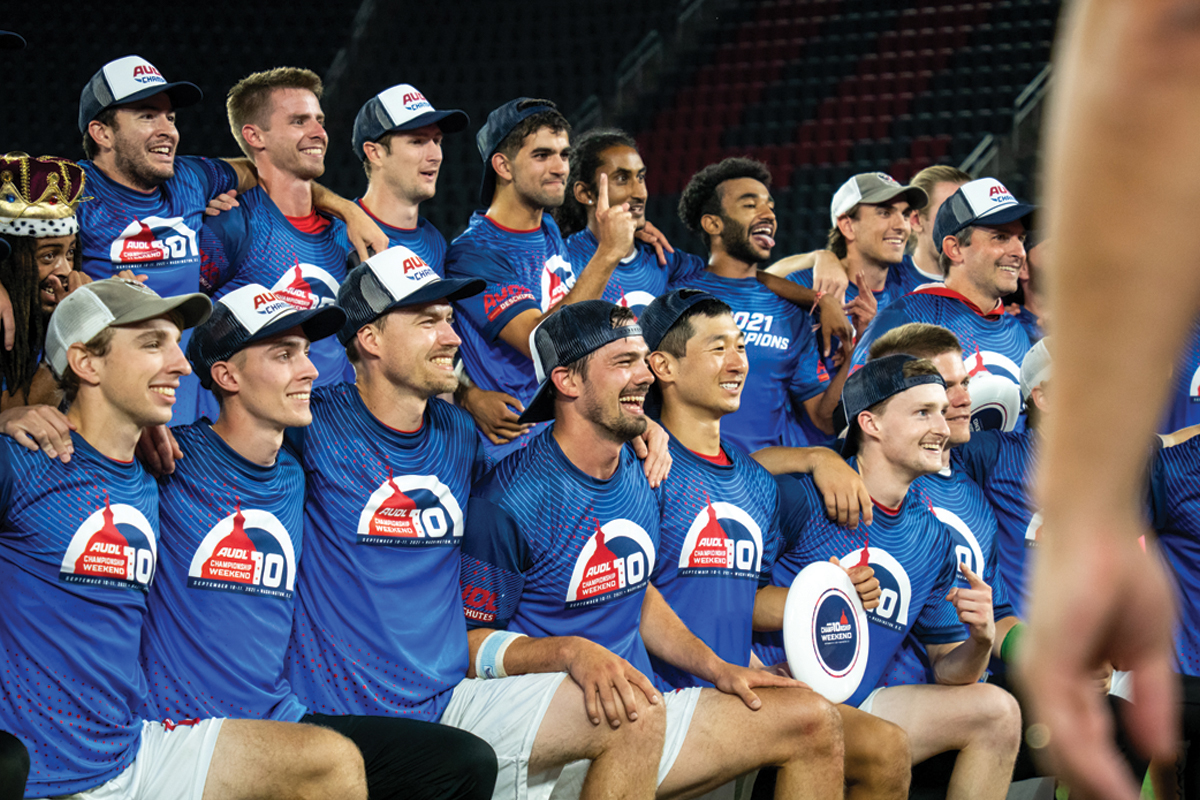 The historic Atlantic Division gauntlet lived up to the hype in 2021; the seeding of the four playoff teams was up in the air until the final week of the regular season. While Atlanta, DC and New York fielded some of the most complete rosters in the league, consistency ultimately won out, with Raleigh finishing as the only team in the league with fewer than 20 turnovers in every game.