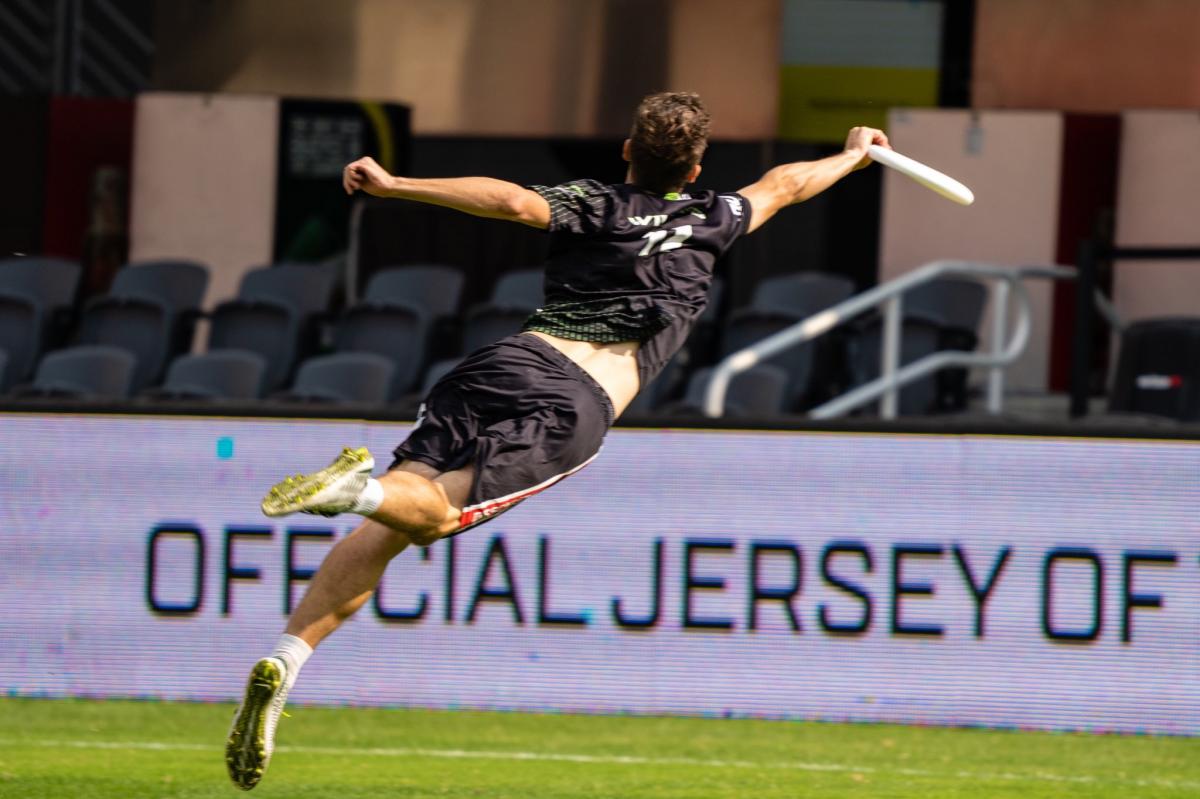 Championship Weekend 10 featured countless moments, with impact plays repeatedly igniting Audi Field throughout the weekend. The following five plays were not only highlights, but they occured in the biggest moments on the biggest stage, sparking momentum and changing the trajectory of the three games.

It’s hard to draw up a better start to Championship Weekend.

The New York Empire begin on offense for the first point of Championship Weekend 10 in Semifinal Game 1 against the San Diego Growlers. Jack Williams, who’s usually a backfield staple, starts his day on the far side wing about 20 yards downfield from the handler set. After a few throws, Ben Jagt gets his first touch of Championship Weekend on a 10-yard in-cut. In under two seconds, Jagt catches the disc, turns, then immediately launches a booming 70-yard backhand towards the back of the end zone. Jack Williams is there, streaking downfield, and leaves his feet at full speed to make the shoulder-high catch for the first goal of the weekend.

It was a tone-setter to say the least. Coming into Championship Weekend with loads of momentum following their overtime buzzer-beating win over Atlanta, New York carried a collective team confidence into their first game. Needing to respect the deep ball coming from the hands of the best deep cutter in the game is plain unfair, and somehow defending Jack Williams when he can be as dominant downfield as he is in the handler space creates all sorts of challenges for a defense. The game was always going to be a star-powered battle between the loaded top-end talent on either side, and having two of them connect in SportsCenter-level fashion on the fifth throw of the game gave New York the momentum they needed to gain a quick advantage in the opening quarter. They would go on to finish the first quarter with an 8-5 lead, then ultimately close out the game 22-18 to advance to the Championship Game.

The Raleigh Flyers began the fourth quarter of the second semifinal game down 13-11 to Chicago, needing flawless offense and tightened defensive pressure to get themselves back in the game. At 16-14, Raleigh received the pull with under seven minutes remaining in the quarter. They eventually work the disc over to Allan Laviolette on the far side of the field, who catches the disc on a well-timed in-cut with plenty of space around him. Terrence Mitchell, who cut in towards the near side prior to Laviolette’s catch, begins to clear towards the middle of the field when he sees the throw go up to Laviolette. Knowing his thrower and having a favorable angle to run onto a huck, Mitchell takes off deep despite starting even with his defender, and Laviolette doesn’t hesitate. He launches a beautiful 77-yard backhand to the middle of the end zone, and then it was T-time—Mitchell uses turbo to just barely run down the throw coming in directly overhead for the Flyers score.

This sequence came immediately after Pawel Janas’ 74-yard bomb to Ross Barker the possession before; the Chicago offense was humming in that fourth quarter, as they needed just 16 throws to score their first three goals of the period. While Chicago averaged 37 seconds for their O-line to score, the Flyers offense had to work notably harder, averaging a minute and five seconds over their first three to open the quarter. They needed to pick up their pace, and they executed with a seven-throw, 35-second point at a critical moment in the fourth quarter. An incomplete pass could’ve led to a Chicago break to put them up three late with less than half a quarter remaining, but instead Raleigh never went away, taking advantage of a few late Chicago turnovers to push the game to overtime and ultimately come away with the win.

Has anyone else gotten a layout block on Jack Williams this season? Or ever?

In a 5-5 game in the second quarter, Raleigh had just turned the disc over in the attacking end zone after testing Jeff Babbitt, who recorded his first block of the game. New York calls timeout and subs in their O-line, and in comes the best player at Championship Weekend. Guarded by Tim McAllister, who was inactive in Raleigh’s first two playoff games against DC and Chicago, Williams dumps the disc back to Solomon Rueschemeyer-Bailey and follows his throw, cutting towards the backfield at about a 45 degree angle. McAllister is literally stride for stride with Williams as soon as the throw goes off, and when SRB attempts to give it back to Williams, McAllister leaves his feet for a momentous layout block.

Williams has made a name for himself as one of the world’s best handler cutters, working his matchups with quick give-and-gos and saucy start-and-stop cuts to typically get open at will. The McAllister block was a statement: Raleigh can not only hang with, but they can limit New York’s stars. A tone-setter for a defense that gave nothing easy to New York all game, the play was exemplary of the Flyers’ top-notch handler pressure that we saw repeatedly down the stretch of the season. Holding New York to their lowest point total of the season, the Flyers defense perfectly complemented their possession-based offense and ultimately led to the Flyers win.

With under three minutes remaining in the third quarter holding a 13-11 lead, the Flyers pulled to an Empire O-line that was struggling to stay in rhythm, running out of time to make a late-game push to take away the Flyers’ advantage. After a centering pass to Ben Katz, John Lithio gets the disc on an in-cut on the near side of the field. Not necessarily known for his throws though willing to huck when the opportunity presents itself, Lithio sees Ryan Osgar streaking deep on Alex Davis, aka The Fastest Man in Ultimate. Seeing one of the top three players on the field going deep and feeling a sense of urgency, Lithio likes his chances and fires an outside-in flick to the end zone. The disc comes in over the heads of both Osgar and Davis, who are running stride for stride with one another, and it’s tailing away from them. With Osgar having outside body position, he’s in position to make the play. But Davis has been glued to Osgar the whole way, and jumping a split second earlier, gets just enough of the disc to deflect it to the ground and save the score.

Another prime example of Raleigh limiting New York’s star power, and this play came at a crucial time. The Empire would ultimately end up scoring the point, but not before two minutes of precious game clock ran off following Davis’ block. The big play took away any possibility of New York tying up the game at the end of the third, with no opportunity for a mini-break at the buzzer. For Davis, who was injured on the play, it was his second impact block of the game and second time he bested Osgar; Davis got a poach block on an Osgar blade to the end zone on New York’s first offensive possession.

Heading into the fourth quarter, the Flyers had only turned the disc over six times; New York had only two opportunities for breaks. Tensions were at an all-time high as New York and Raleigh traded scores to start the fourth before a Raleigh break gave them a two-goal cushion, though New York wasn’t going away—they responded with back-to-back holds to bring the game back within one at 16-15.

With just over four minutes remaining in the quarter, Raleigh receives the pull having yet to turn the disc over in the final period. Moving the disc from the break side back to the force side, Jacob Fairfax finds himself with the disc on the far side of the field, with Eric Taylor setting up the next cut from the back of the stack. After a few steps towards the force side, Taylor plants to reverse direction, taking off to the crossfield end zone space with a couple yards of separation on his defender, Ryan Drost. Fairfax fires the hammer, though the float on the disc allows Drost to regain ground and contest the catch. But Taylor doesn’t care. He skies above Drost with two hands, dunking on his defender through contact to give the Flyers a two-goal lead with three and a half minutes to go in the game.

To re-emphasize the stakes: New York needed to force a turnover to close the gap. They were up against a Raleigh O-line that had really only thrown the disc away once—aside from a first half buzzer beater attempt—since the first point of the game. They had the third all-time block getter matched up on the receiver. The disc floated a little more than Raleigh would’ve liked. This was New York’s chance, and unfortunately for the defending champs, Eric Taylor had other plans. The defining play of the quarter maintained the Flyers advantage into crunch time, forcing New York into desperation mode down the stretch as their window was slowly shut by the ridiculously efficient Raleigh offense.