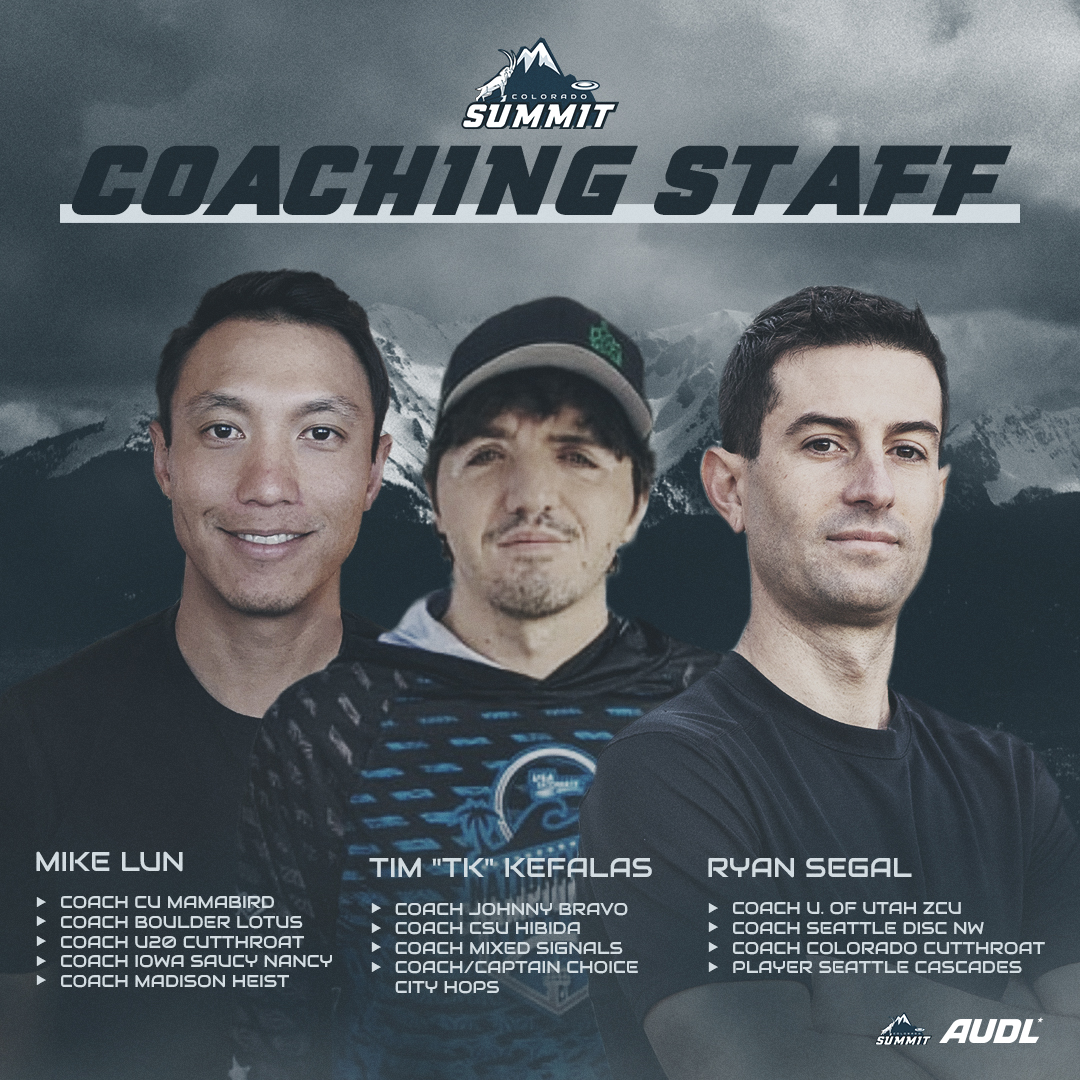 The Colorado Summit is thrilled to welcome Mike Lun, Tim “TK” Kefalas and Ryan Segal to the coaching staff for the 2022 season. The team completed a public application process for head coach and hired three of the applicants for the coaching staff. The three coaches will work collaboratively to oversee all aspects of coaching the Summit. The team may still hire additional assistant coaches moving forward. Furthermore, the coaches have an excellent advisory board, The Summit Coaches Council, of accomplished Colorado coaches who will lend support in an advisory role.

Mike Lun has been playing competitive ultimate in the mixed, open, and master's divisions for 20 years. He started coaching in 2010 at the University of Iowa with Saucy Nancy for three seasons and Madison Heist for one season before moving to Colorado where he coached the U-20 Cutthroat Boy's team for two seasons and is in his eigth season with Colorado Mamabird.

“Establishing culture is priority one. It will be important to acknowledge that this is a new team and that there will be many growing pains. Our goal is to create a fun environment with systems that build good habits. We strive to be the best versions of ourselves, and enjoy any opportunities that push us to reach that potential,” said Lun.

Tim “TK” Kefalas has been playing and coaching competitive ultimate in Northern Colorado since 2003. He played at CSU, Drive Thru Liquor (DTL) and Sack Lunch. TK coached the CSU men's team from 2008 to 2018, helping guide the program to its first nationals qualification in 2017. After college TK was a part of leadership for the Fort Collins club Mixed squad, Killjoy, and was co-founder of the club Men's team, Choice City Hops as well as a co-founder and coach of Mixed Signals, a new Colorado Mixed team in 2019. For the past two club seasons, TK has been coaching Johnny Bravo. TK’s passion has always been on the defensive side of the disc, with a focus on disruptive schemes and team defense.

“I'm looking forward to bringing my passion, energy and defensive prowess to the Summit this season and helping build up the new franchise to reach both the pinnacles of community involvement and competitive focus,” said Kefalas.

Ryan Segal played in the AUDL previously as a member of the Seattle Cascades. He has a decade of coaching experience and during that time has coached the University of Utah Men’s team, as well as YCC programs with Disc NW in Seattle and with Colorado’s Cutthroat. Segal is a founding board member of the Utah Ultimate Disc Association and coached several of the first High School teams in the state of Utah.

“The Colorado Summit’s mission of investing in a community of athletes and fans at all ages resonates with me. I have consistently worked to create an inclusive and welcoming environment for all. This is accomplished through a process of being intentional and mindful, as well as consistently knowing when to step back and listen to the viewpoints of others who may be different from myself,” said Segal.

The Summit will play six home games at University of Denver's Peter Barton Lacrosse Stadium. Season tickets are on sale through the team's official online store.