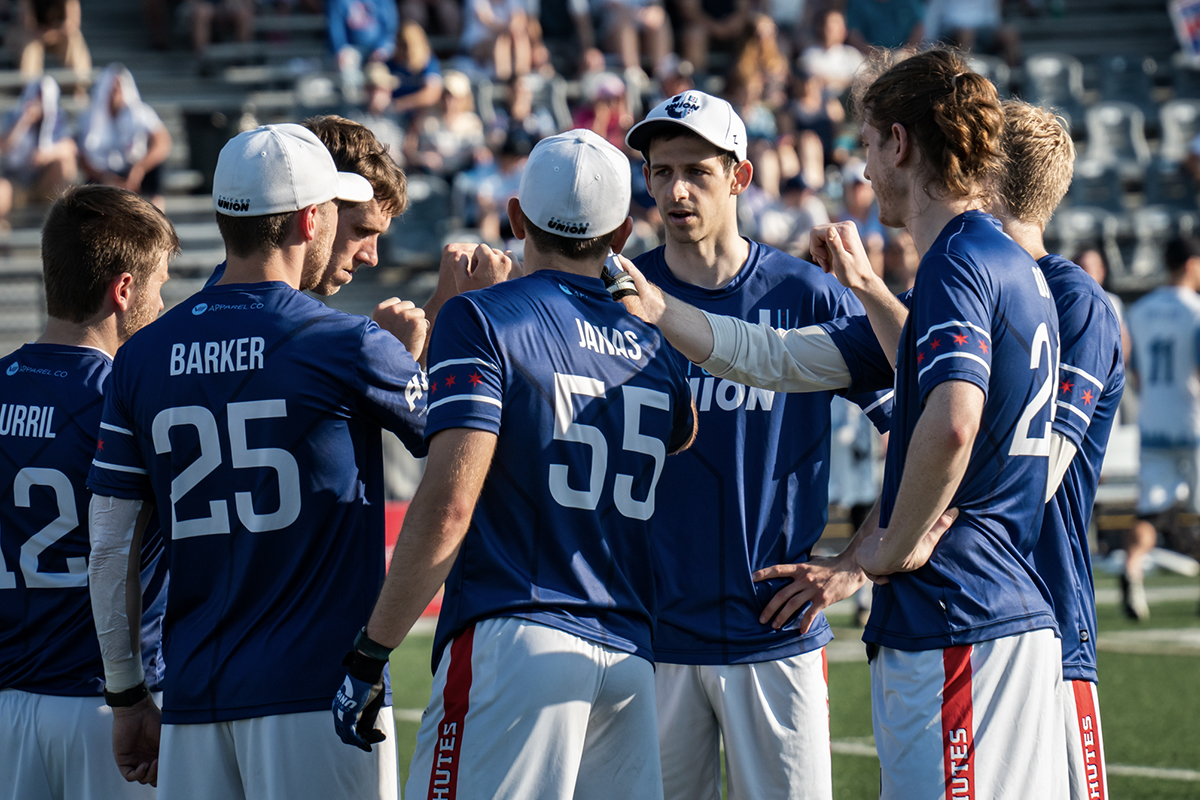 Coming into 2021, the Central Division looked like Chicago’s division to lose. Announcing a multitude of signings that included Kurt Gibson, former Indianapolis AlleyCat Keegan North, and former Madison Radicals all-stars Pat Shriwise and Peter Graffy, the Union had assembled a roster with the most top-end talent in the division; on paper, the talent gap felt significant when compared with the other four teams. The Minnesota Wind Chill were going to be without their Winnipeg contingent that accounted for massive amounts of offensive production in 2019, while Indy and Madison had several notable players retire in addition to being robbed of their respective stars by Chicago; Detroit was (and is still) looking for their first win since 2017.

Despite Madison looking like a shell of their former selves and Minnesota starting the season with a never-before-seen handler core—Josh Klane would miss the first three games of the year due to injury—the two teams put on a show on the opening night of the season. The Klane injury left a huge hole in the Minnesota backfield; Klane had thrown 50-plus assists in three consecutive seasons as the team’s primary O-line handler. So what did Head Coach Ben Feldman do? He turned to two unproven rookies, Andrew Roy and Will Brandt, to lead the Minnesota offense in Madison, in front of one of the toughest home crowds in the league, in the featured DraftKings Game of the Week, in the first AUDL game in nearly two years. 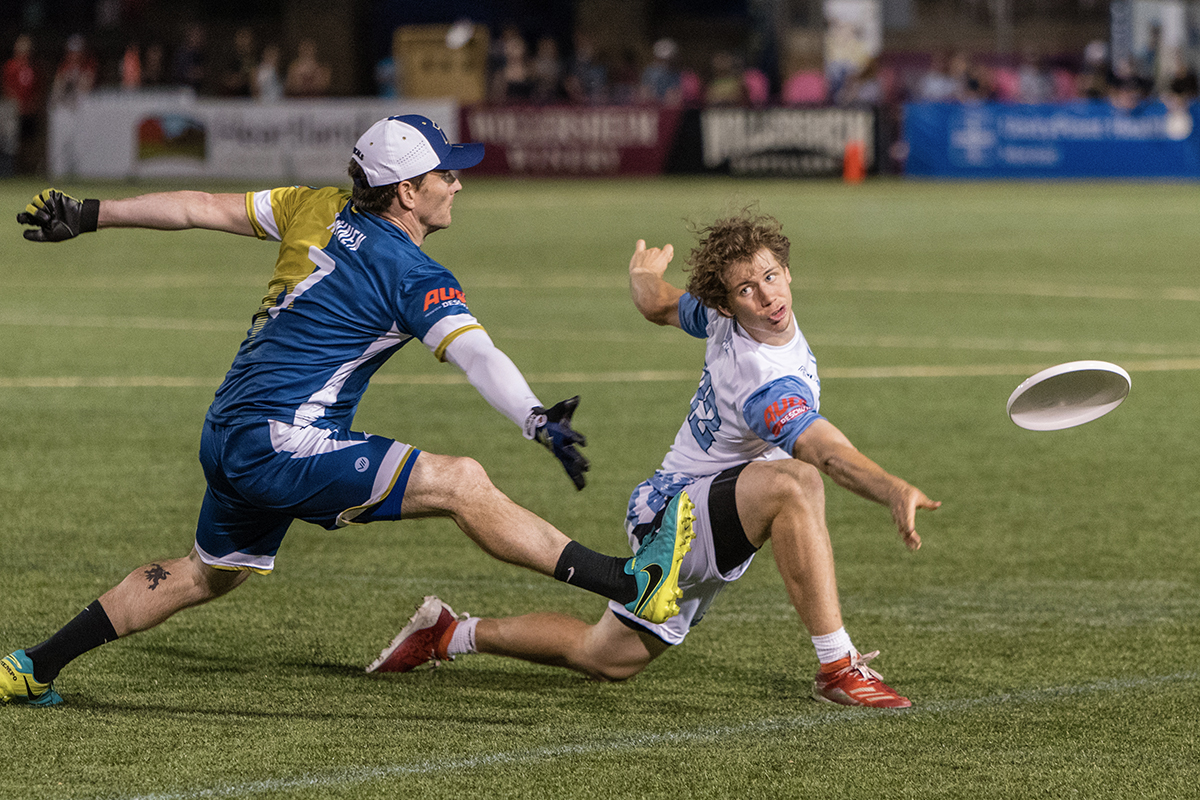 Roy and Brandt rose to the occasion and announced themselves to the league in their AUDL debut, combining for over 100 completions and 450 throwing yards en route to a thrilling overtime win over the Radicals. It was a frustrating opening season loss for a Madison team that had just missed the playoffs for the first time in franchise history in 2019; Kevin Pettit-Scantling and co. took out their frustration the next day against the Detroit Mechanix, trouncing the Mechanix 34-10, the largest margin of victory of any 2021 game. For Minnesota, the early-season momentum would be put to a temporary halt the following week in Chicago, only to be regained in a Week 3 rematch vs. Madison, where the Wind Chill prevailed 25-19 at home.

Meanwhile, the Union started 2021 as advertised. They averaged a miniscule 8.6 turnovers per game over their first five contests, with their efficient offense complementing a dangerous D-line featuring big playmakers in Drew Swanson and Nate Goff. Pawel Janas had a slightly less featured role in the offense compared to being the clear QB1 of years past, but still was completing a career-high 97.7 percent of his throws averaging 369 throwing yards per game. Shriwise and North were integrating well alongside Janas in the backfield, while Ross Barker took on a featured O-line cutting role after spending the 2019 season captaining the D-line; Barker averaged five scores per game through the team’s five-game win streak to start the season. 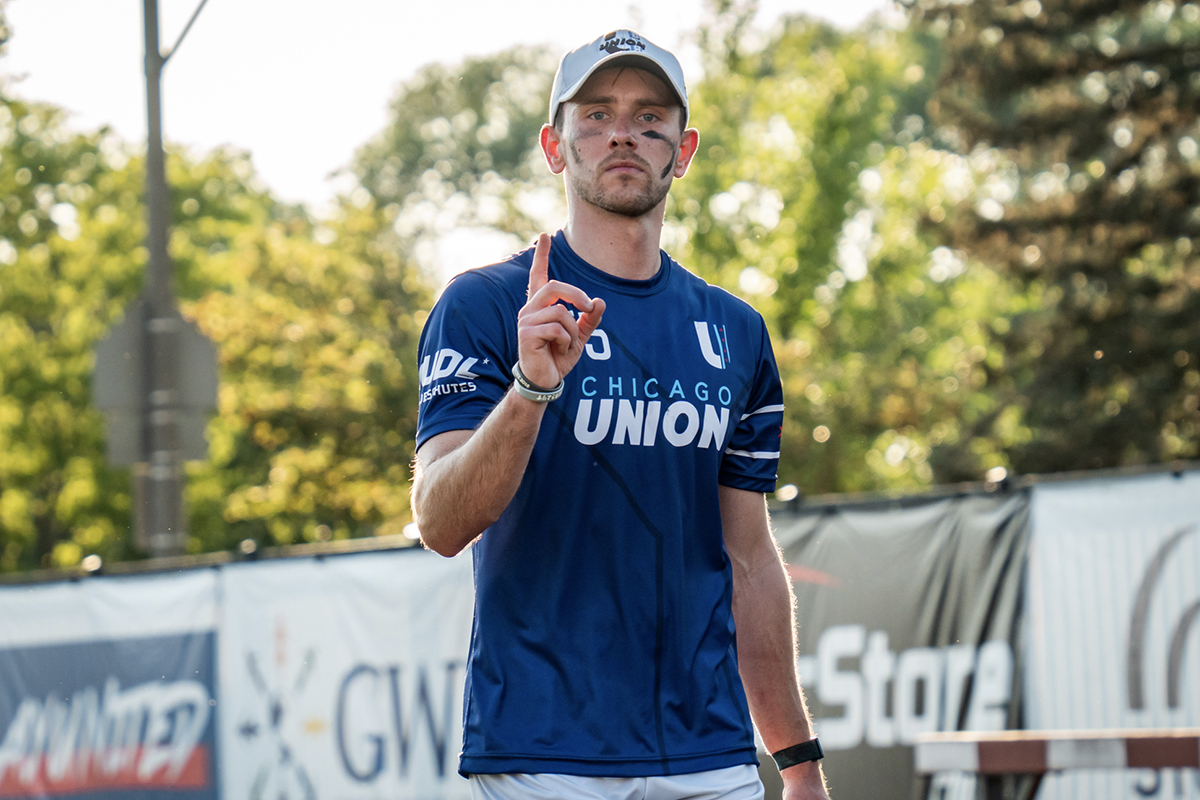 Sitting at 5-0 after the first five weeks of play, Chicago traveled up to Madison to take on the Radicals for the second weekend in a row in Week 6. The Friday before, the Union had narrowly edged out the Radicals 18-15 in a game that featured a patient Chicago offense against the constricting Madison zone defense. Facing the same defense, plus taking on the “eighth man” of the Breese Stevens Field crowd, the road rematch with Madison proved to be a gauntlet, as expected. Pettit-Scantling and the Radicals kept the Union out of sync all game, holding the visitors to a season-low 16 points. Madison came away with the three-goal win and changed the narrative of the division: Chicago was not untouchable. 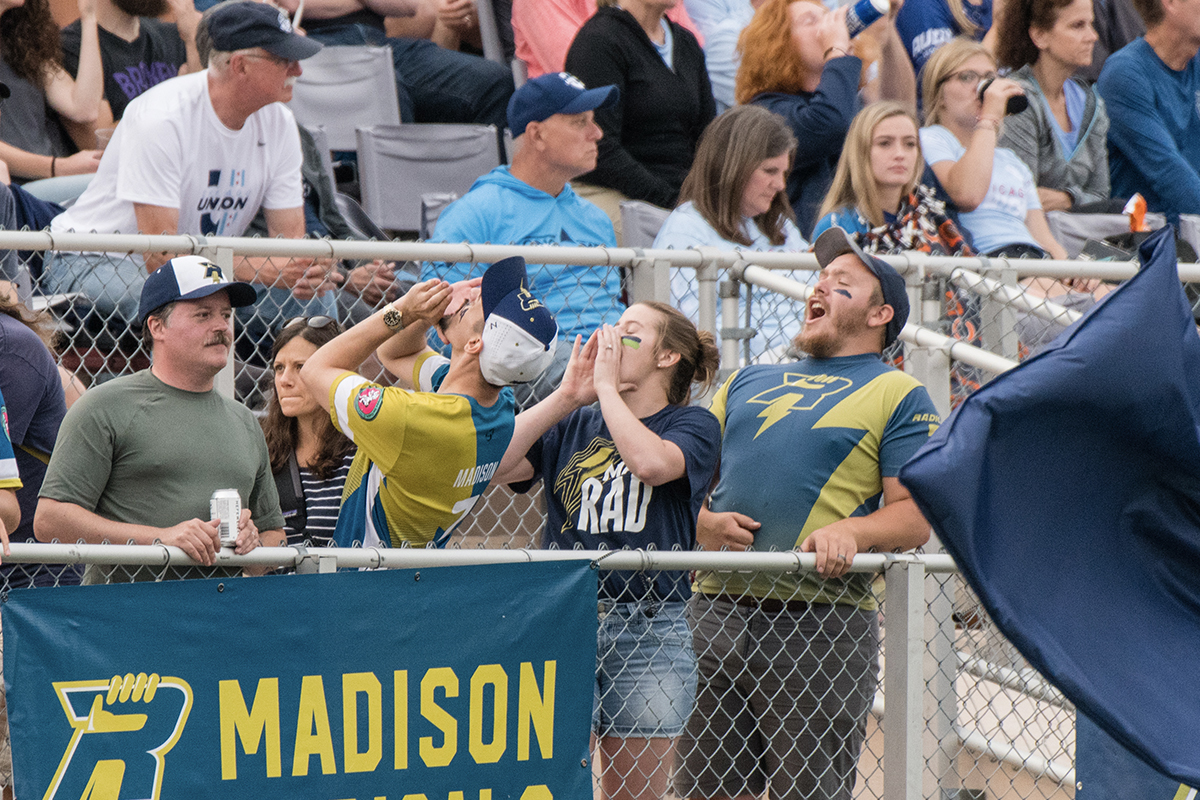 The very next day, Minnesota traveled down to Chicago for their second meeting with the Union and gutted out a 20-18 statement win. They controlled the clock and seized break opportunities throughout the game, holding off a late comeback attempt by milking possessions in crunch time. The win moved the Wind Chill into first place in the Central Division at 5-1, with the Radicals just half a game out of a playoff spot at 5-3.

Halfway through the regular season, the trio of Chicago, Madison and Minnesota established themselves as clear playoff race favorites atop the Central. Indy showed plenty of fight throughout the season, and nearly came away with disruptive wins over both Madison and Minnesota, but midway through 2021 the AlleyCats were already 0-5 against the three potential playoff opponents. They nearly pulled off the road upset over the Radicals in Week 7, ultimately falling 17-16 after getting outscored 4-1 in the fourth quarter. Later in July with playoffs starting to take shape, the ‘Cats were inches away from tying up the game at the end of regulation in Minnesota after a wild sequence in the final seconds. In addition to the two one-goal losses, three of Indy’s losses came by just four goals.

Week 8 was another inflection point in the Central, with Chicago traveling up to Minnesota to battle the Wind Chill for first place. A windy game with plenty of mistakes—both teams finished with 20-plus turnovers—the Wind Chill came out flat while Chicago just made more plays and took better care of the disc en route to a 20-16 win. The victory put Chicago in position to control their own destiny in their pursuit to host a home playoff game.

The Union’s defining game of the season would come the following weekend, as they traveled up to Madison to take on the Radicals for the third and final time. Madison needed a win to keep their playoff hopes alive, while Chicago was looking to clinch their playoff berth. A back-and-forth battle throughout, the game remained within one or two goals for the duration of the first three quarters with Madison taking their first lead of the game with 3:12 remaining in the third. In the fourth quarter, Chicago played their best ultimate of the season. The Union scored three unanswered goals to start the frame—in large part due to the playmaking of former Radical Peter Graffy—and increased their lead to four goals. Chicago outscored Madison 8-4 in the final frame, got the win, and clinched a playoff berth for the second consecutive season. 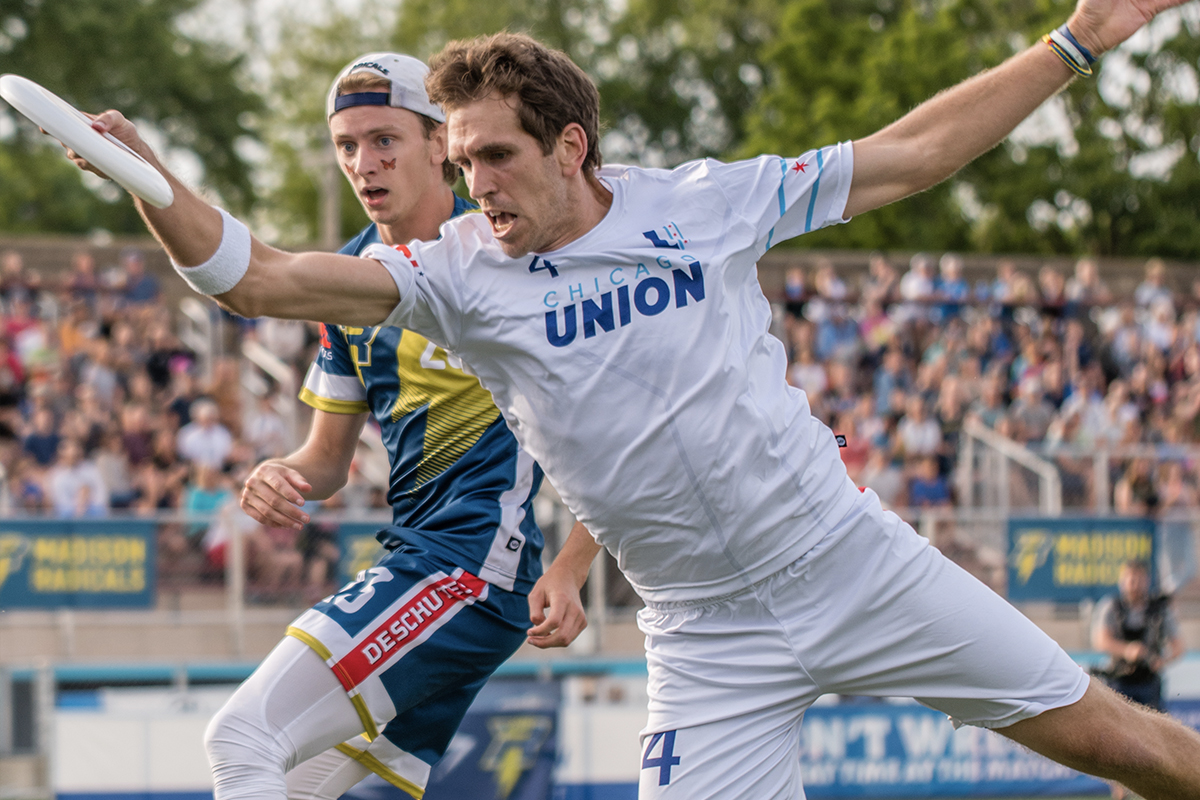 The Madison loss all but eliminated the Radicals from playoff contention for the second straight season. While their season came up short of expectations, the Radicals still boasted the most efficient defense in the league and showcased plenty of playmaking potential in a young offensive core. They would go on to finish the regular season 7-5 after a 19-15 loss in Minnesota, as the Wind Chill completed the season sweep of Madison, a first for the Central Division.

Minnesota closed the regular season on a four-game winning streak to finish 10-2 before traveling down to Chicago to take on the 10-2 Union in the Central Division Championship Game. While Chicago had taken two of three games from Minnesota during the regular season, the Wind Chill came out and controlled the playoff game for three and a half quarters. They played like the better team, made fewer mistakes and forced the Union into tough spots offensively. With the Wind Chill up 19-17 with 4:30 left in the fourth, the tide turned on a Nick Vogt goal line throwaway. The Union D-line marched down the field to bring them within one, then Nate Goff poached the throwing lane on a Josh Klane huck on the following possession. In the blink of an eye, the Union broke the Wind Chill on four consecutive points to close out the game 21-19. The game marked Chicago’s first ever playoff win, and first trip to Championship Weekend. 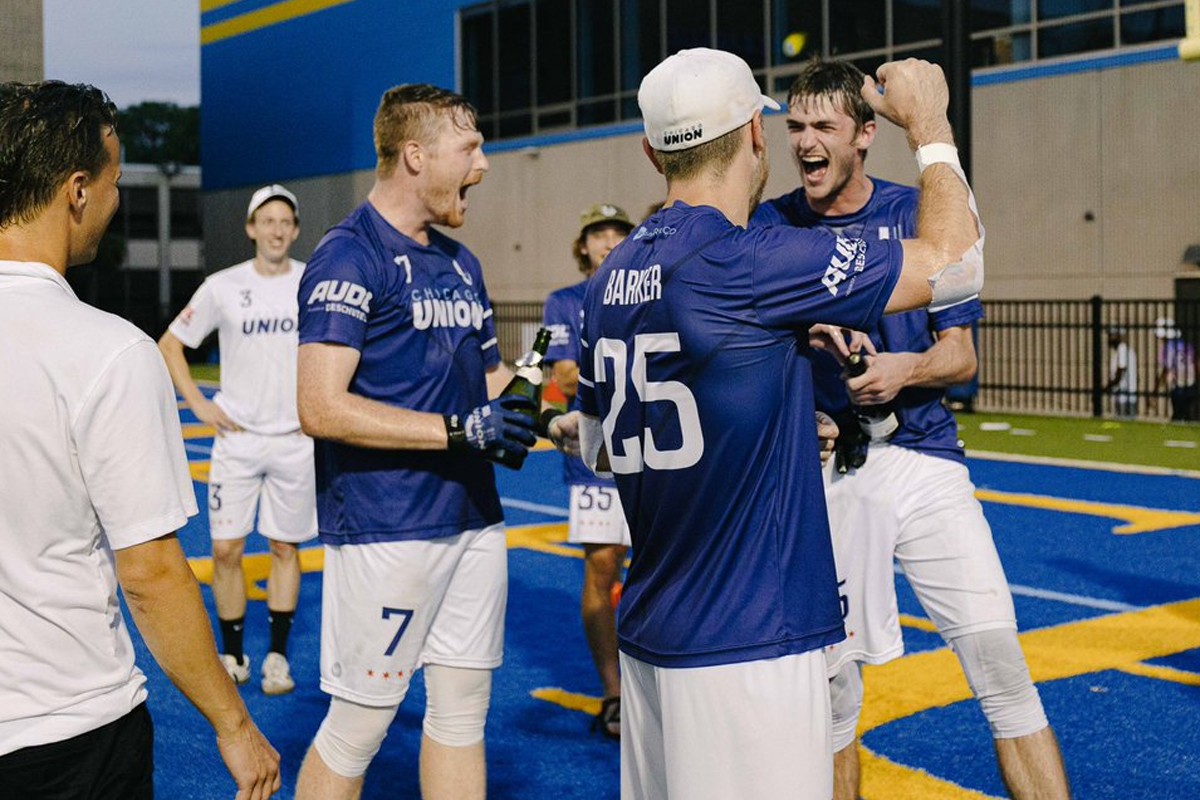 Seeded first at Championship Weekend due to overall point differential, the Union matched up with the fourth-seeded Raleigh Flyers in the semifinals. Both offenses got off to relatively slow starts, as the Flyers took an 8-7 lead into halftime. Chicago looked to be putting the clamps on Raleigh in the second half, scoring the first three goals of the third quarter and maintaining their break advantage for the vast majority of the fourth quarter. But the Flyers wouldn’t quit. They kept punching back after each Union score, then when the Chicago offense ultimately made a couple costly mistakes on back-to-back points, Raleigh jumped ahead to a one-goal lead late in the fourth. While Chicago was able to tie it up with seconds left to send the game to overtime, the momentum had shifted in Raleigh’s favor heading into the first overtime in Championship Weekend history. Keegan North couldn’t pull down a Kurt Gibson hammer on Chicago’s final possession, and the Flyers came away with a 21-20 win to advance to the finals.

Though they fell short of their championship aspirations, Chicago responded well to two mid-season losses, showed the ability to rally late against Madison and Minnesota, and nearly took down the eventual 2021 AUDL champs. With a target on their backs and two hungry teams to the north, another three-team (minimum) battle at the top of the division is likely to repeat itself in 2022.