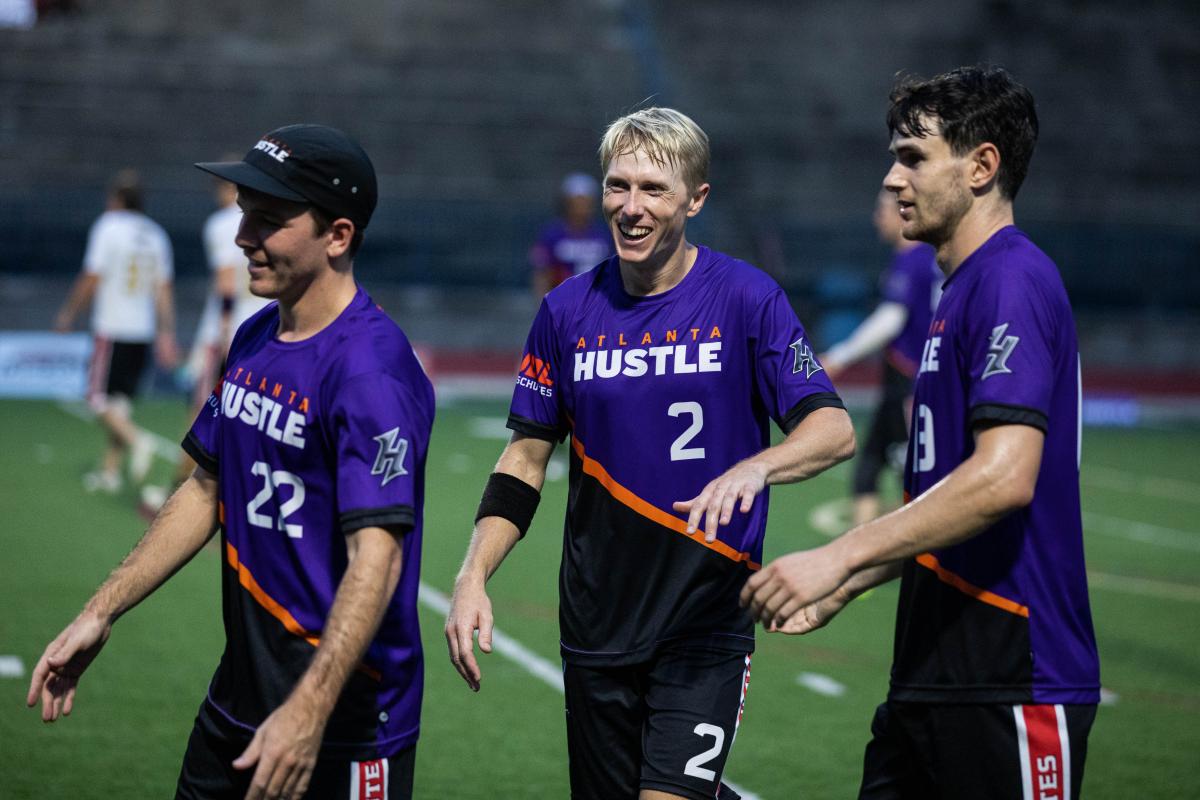 Paul Arters, Chicago Union
The 28-year-old has been an underrated stellar contributor all season long, but unquestionably his best game of the summer came this past Friday night in Madison, helping the Union rally late to prevail over the Radicals and officially clinch a postseason berth. Arters finished with season-highs in completions (26), assists (6), and plus/minus (+8), compelling teammate and AUDL assist leader Pawel Janas to comment on Instagram, “MVPaul is King.”

Calvin Brown, Los Angeles Aviators
Since Brown moved over to the Aviators’ D-line, Los Angeles has gone 3-0, sweeping their road doubleheader in Week 8 before delivering another strong performance against Seattle at home in Week 9. In Sunday’s 20-15 triumph over the Cascades, Brown erupted for a career-best five blocks—he had just seven previous blocks in his first 12 AUDL games—while also dishing for 489 throwing yards and three assists as the Aviators recorded 10 breaks in the game, three more than the team’s previous high this year. Currently, the Raleigh Flyers and Atlanta Hustle are the only two teams in the league who have longer winning streaks than the Aviators.

Henry Fisher, Raleigh Flyers
Speaking of the Flyers, Fisher helped Raleigh improve to 6-2 on Saturday with a 20-17 win over Pittsburgh, in which the speedy 6’6” cutter tallied season-highs in both goals (6) and assists (3). Furthermore, across the 11 AUDL games in Week 9, no player accumulated more receiving yards than Fisher, who rampaged for 405 and helped the Flyers convert 12-of-14 hucks in their sixth consecutive victory.

Ben Jagt, New York Empire
Jagt joined Boston’s Tanner Halkyard as the only players in the league with multiple double-digit plus/minus performances this season, compiling seven goals, five assists, and two blocks in New York’s 25-18 road win in Tampa Bay. Jagt finished +13 against the Cannons, giving him two of the top three individual plus/minus performances of the season league-wide (and the two best if we exclude games against the winless Detroit Mechanix from consideration). Interestingly, Jagt’s 231 receiving yards were a season-low, but still the second-most on his team.

Dillon Larberg, Dallas Roughnecks
In a game where both O-lines struggled—and to be frank, the Spiders and Roughnecks have been incredibly inconsistent on offense all season long—Larberg helped orchestrate eight breaks for the Dallas defense, narrowly enough for the Roughnecks to eke out a 15-14 on Sunday afternoon. The veteran defender tossed five assists and tallied three blocks, producing a game-best +7. It was the 13th time in his 53-game AUDL career that he registered at least three blocks in a game, and the 12th time that he contributed multiple assists and multiple blocks in the same contest.

Andrew Roy, Minnesota Wind Chill
In a sloppy but still-entertaining upwind/downwind game where the two teams combined for 33 goals and 53 turnovers, the Wind Chill’s talented rookie handler completed all 59 of his throws, an astonishing achievement considering the number of times the disc found the turf on Saturday night in St. Paul. Roy also produced three goals, three assists, and 321 throwing yards, his third 300-yard throwing game of the season. Overall, he finished the night +6, double the +3 he recorded on July 11 in what had previously been his highest plus/minus of the year.

Austin Taylor, Atlanta Hustle
A fringe MVP candidate all season long, Taylor may have vaulted himself into genuine top five consideration with his otherworldly throwing performance against Pittsburgh. Nine assists, 732 throwing yards, and just one turn in 47 throws are the relevant numbers, as Taylor also finished with 224 receiving yards, giving him 956 total yards in the Hustle’s 27-22 victory. No U.S. player has more yards in a game this season, with only Ottawa’s Nick Boucher rising above Taylor on the full-league ledger. Taylor currently ranks third in the league with 38 assists, fourth in the league with 3,030 yards, and perhaps most importantly, first in the league in terms of his team’s record, as the Hustle rose to 8-1 and clinched the franchise’s first playoff berth since 2016 with still three weeks remaining in the regular season.