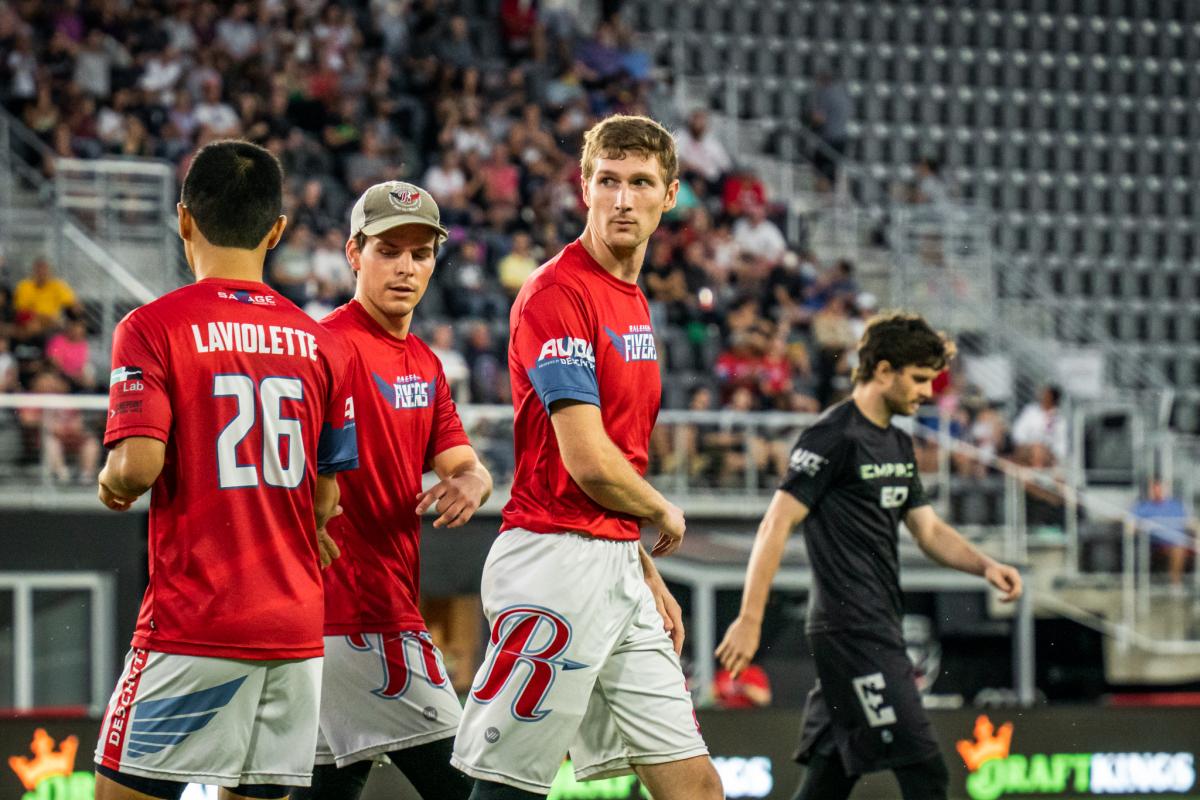 Throughout the 2021 season, the AUDL’s weekly honor roll will be revealed each week, honoring seven players whose individual exploits merit recognition. The players are listed alphabetically by last name.

Jacob Fairfax, Raleigh Flyers
Not too many players can claim they had their best game of the season in the final, but that’s a true statement for Fairfax, who registered a season-best plus-7 on Saturday night against the Empire. In addition to scoring five goals and dishing two assists, Fairfax completed all 25 of his throws, taking care of possession like everyone else on Raleigh’s super smooth O-line. The 25-year-old had fewer than 25 completions in every game during the regular season, but was more prominently involved in the semis and the finals, completing 51-of-52 throws, with a season-high 203 throwing yards on Friday night against Chicago.

Matt Gouchoe-Hanas, Raleigh Flyers
In two pressure-packed games in DC, the 25-year-old Gouchoe-Hanas was a reset master, maintaining possession at all costs, though even that probably undersells his impact. He also threw for over 300 yards in both games while going 116-for-116 for the weekend, a scintillating 100 percent completion rate that helped carry the Flyers to the title. While he did not throw any assists, he had 10 hockey assists in the two games, along with four goals, as the Raleigh offense went unbroken for the final 47 minutes in Saturday night’s championship contest.

Anders Juengst, Raleigh Flyers
With a turnover-free plus-7 against New York on Saturday, Juengst delivered one of his best games of the year with the championship hanging in the balance. The statistics— four goals, three assists, 33-for-33 against the Empire—don’t fully capture his impact as a super steady and reliable target. Throughout the entire season, he showcased a remarkable knack for getting open in tight spaces, and that remained true in the semis and finals, as the 23-year-old continued to get free and then make the right decision with the disc to keep the Flyers’ offense flowing.

Allan Laviolette, Raleigh Flyers
What a season for Laviolette, which he punctuated with more clutch playmaking in DC. His two blocks on Friday against Chicago were both pivotal, along with everything else he did to chew up chunks of yardage and put throws exactly where his receivers needed them. More than six years older than anyone else on the Flyers’ usual O-line, Laviolette’s leadership, abilities, and demeanor set him apart. There are glue guys who earn that moniker because they don’t make mistakes and are perpetually solid, but Laviolette was a different kind of glue guy for the Flyers, as he took the right chances, played through mistakes, and provided the versatility to handle any role at an exceptionally high level.

Terrence Mitchell, Raleigh Flyers
One of the seven original Flyers who’s been on the team since 2015 and competed in Saturday’s championship game, Mitchell showcased his refined decision-making along with his sizzling speed throughout the weekend. Like many others on Raleigh’s O-line, Mitchell accounted for zero turnovers in the semis and finals at Audi Field. Perhaps more importantly, he authored several signature highlights in the deep space. After the game, the 26-year-old proudly paraded around DC wearing a shiny crown, along with a massive grin, both appropriate for a guy who’s always competed with moxie, swagger, and joy.

Eric Taylor, Raleigh Flyers
The numbers certainly don’t jump off the page, but Taylor’s impact was obvious to anyone who watched at Championship Weekend. His pulls were phenomenal, his defensive presence dramatically limited some of the sport’s brightest stars, and he still managed to deliver several moments on offense that were crucial in the Flyers’ run to the title. Most notably, with 3:28 remaining in the fourth quarter on Saturday and Raleigh clinging to a one-goal lead, Taylor skied for a two-handed snag over Ryan Drost to haul in Fairfax’s cross-field hammer, which doubled the Flyers advantage and moved them one significant step closer to victory against the Empire.

Sol Yanuck, Raleigh Flyers
It’s virtually impossible to isolate one individual among Raleigh’s 20—and this seven-man Honor Roll regretfully excludes the gigantic contributions of other impactful Flyers like Henry Fisher, Tim McAllister, and Noah Saul, among others—but with all that said, it would not be too difficult to make a pretty compelling case for Yanuck as Raleigh’s most important cog at Championship Weekend. The fulcrum of the Flyers’ offense, Yanuck completed 138 passes while throwing eight assists and scoring three goals across the two games, along with coming up with a monumental block late in the third quarter against New York. With his instincts, intelligence, and indispensable energy, the 25-year-old was Raleigh’s most consistent and unstoppable offensive weapon as the Flyers vanquished the defending champs in the finals to earn their first AUDL title.