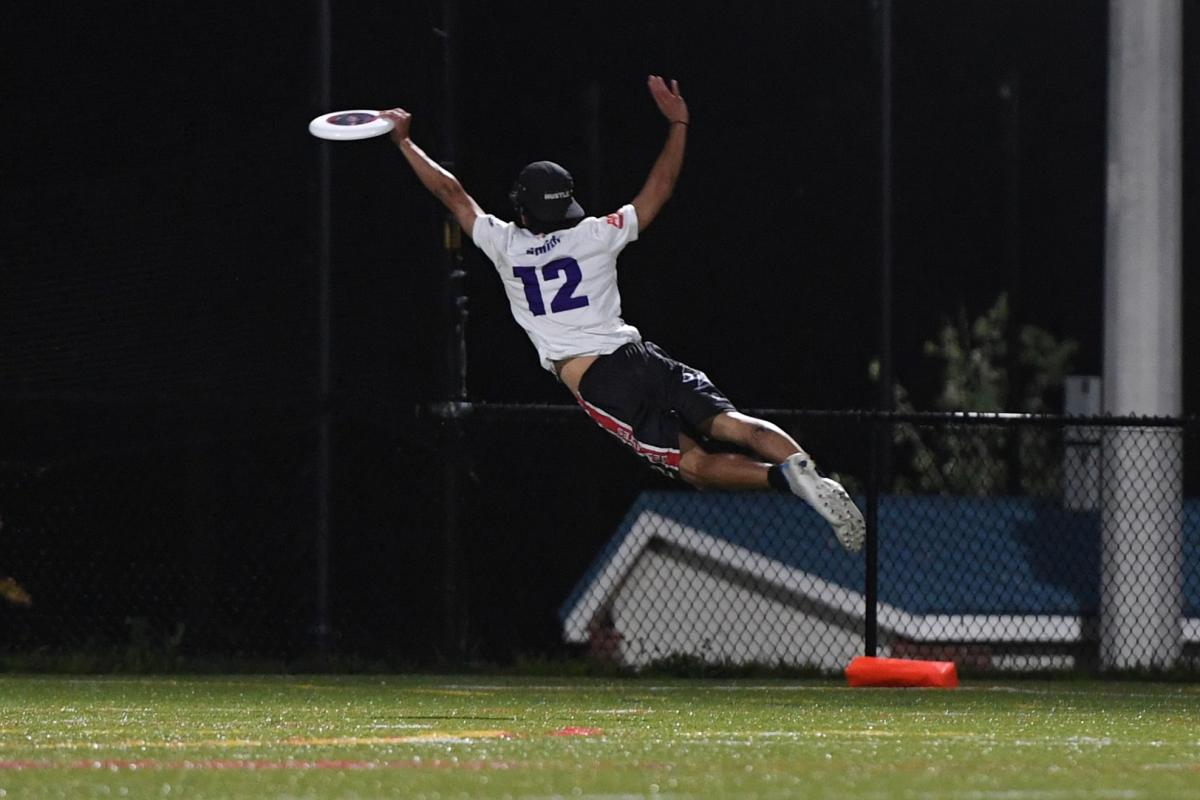 Throughout the 2021 season, the AUDL’s weekly honor roll will be revealed each week, honoring seven players whose individual exploits merit recognition. The players are listed alphabetically by last name.

Geoff Bevan, Ottawa Outlaws
The 28-year-old Carleton alum—Ottawa’s Carleton, not Minnesota’s—delivered the best game of his five-year AUDL career on Saturday against Toronto, throwing seven assists, scoring three goals, and completing all 41 of his throws. As a distributor, he passed for 427 yards and finished with a career-high plus-10 in the Outlaws season finale.

Cam Harris, Toronto Rush
As good as Bevan was, the MVP of Saturday’s regular season finale up in Canada was Toronto’s Harris, who became just the third player in the AUDL this season to accumulate over 1,000 yards in a single game. The versatile eighth-year vet threw for 708 yards while also gaining 341 receiving yards, leading the Rush to a narrow 24-22 victory that propelled Toronto into the Canadian playoffs, where they will take on Montreal this Thursday night. Harris also had eight assists on Saturday, the most he’s recorded in a game since he dished 10 dimes against the Outlaws way back in 2015.

Ben Jagt, New York Empire
Relatively quiet by his towering standards for some of the night, he certainly made two of the biggest plays in AUDL history in the most critical moments late in regulation and overtime. Jagt’s layout block on Atlanta’s Brett Hulsmeyer with less than 10 seconds left in the fourth will forever be remembered as one of the most clutch and remarkable defensive efforts the league has ever seen. Then, in overtime, after Jeff Babbitt errantly angled his short toss near the goal line, Jagt made the unbelievably difficult grab on the trailing edge disc while laying out in the end zone to give New York the lead. It speaks volumes that Jagt can have a relatively chill game—with the exception of the two aforementioned heroic moments—and still produce a plus-9, with four goals, four assists, a block, and no turnovers.

Ryan Osgar, New York Empire
His decisions and execution were not completely flawless on Saturday night, but Osgar still was involved in almost every Empire score, continuing the trend where he more often than not takes what he wants on the field. He finished with seven assists and five goals, while churning up 619 yards in his 28 points played. Oh yea, he also snagged the thrilling final goal, hauling in Jack Williams’ Hail Mary huck as time expired in overtime to send New York back to Championship Weekend! Was it the most significant buzzer-beater in AUDL history? It’s certainly in the conversation, and if New York goes on to win the whole thing again, it almost definitely becomes number one, if it’s not there already.

Matt Smith, Atlanta Hustle (pictured)
Three days later, I’m still hyped by Smith’s insane 300th goal, the crazy athletic layout grab that gave the Hustle an early 2-1 lead against the Empire. And even beyond that breathtaking highlight, Smith had an excellent all-around game, with four goals, two assists, 445 total yards, and no turnovers. Although New York’s late-game heroics ultimately denied him his first ever trip to Championship Weekend, Smith continued to showcase his legendary AUDL status, illustrating how even at 32 years old, he can still defy gravity and deliver some of the most impressive athletic feats of the entire season.

Austin Taylor, Atlanta Hustle
The Empire attempted to put Taylor in tricky spots, but all night long he still almost always had the right answer. Atlanta’s quarterback completed 58-of-59 throws for 498 yards and seven assists, anchoring the Hustle’s offense that only had two turnovers at halftime on Saturday night. In his last four games, the 29-year-old averaged over eight assists and just under 600 throwing yards per game, while also completing over 96 percent of his passes, cementing his All-AUDL status with his tremendous finish to the season. Although the Hustle’s season disappointingly ended shy of the semis, Taylor’s ascent to stardom bodes well for the franchise’s promising future.

Jack Williams, New York Empire
Speaking of stars, Jack just might be the most underrated star in the sport. Of course, most everyone knows he’s a dynamic and versatile presence who’s capable of greatness, but throughout his AUDL career, he’s been overshadowed a bit by MVPs, Jonathan Nethercutt in Raleigh and Ben Jagt in New York. Despite this reality, there’s a case to be made that Williams deserves to be the go-to decision-maker in any critical situation, a role he has embraced in every big spot with the Empire. On Saturday against Atlanta, Williams played an astounding 39 points, threw for 600 yards, and played dynamic defense on some of Atlanta’s most dangerous weapons that helped key New York’s second-half comeback. Obviously, he also launched the final throw of the game, giving his teammates a real chance at coming down with the game-winning score, which Osgar hauled in to cap the unforgettable evening.