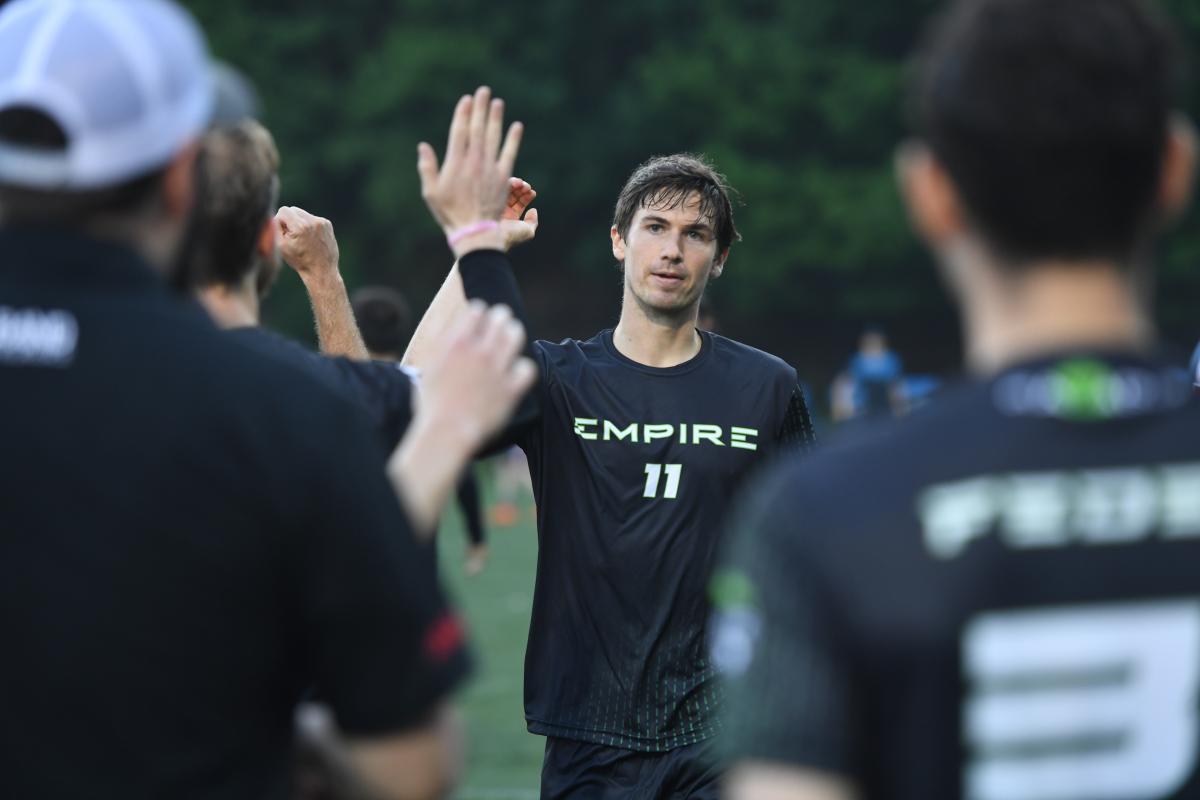 Eric Brodbeck, Austin Sol
Although the Sol’s season disappointingly concluded with a home loss to Dallas, Austin would not have been able to keep it close without Brodbeck, who’s emergence in his second pro season helped reshape the Texas rivalry. The 23-year-old led the Sol in goals (5), assists (3), throwing yards (248), and receiving yards (248), while only turning the disc over one time in Saturday’s narrow setback. One of the breakout players of the entire 2021 season, Brodbeck is currently second in the league in plus/minus at +54. His all-around contributions will absolutely earn him consideration for All-AUDL honors once the full regular season concludes.

Gabe Hernandez, Dallas Roughnecks
The Roughnecks’ regular season was unquestionably a turbulent experience, but it’s hard to ignore that the team finished 4-0, a stretch that coincided with Hernandez’s move to the O-line. In Saturday’s clincher against the Sol, Hernandez delivered the dagger with a thrilling layout score that absolutely will appear on this week’s Top 10. Furthermore, he led the Roughnecks in completions (35), assists (4), and total yards (465), catapulting Dallas back into the postseason for the fifth consecutive season, every year of the franchise’s existence.

Zach Norrbom, DC Breeze
It’s tricky to isolate one player from DC’s two-win weekend, as the Breeze earned road wins at Philadelphia and Pittsburgh in their typically balanced fashion. But Norrbom’s efforts across the two games do stand out, especially since he completed all 63 of his throws on the Pennsylvania trip. Whereas DC endured 38 turnovers in their two games, the most in any two-game stretch all season, Norrbom was his steady self. Interestingly, his brother Gus, who only played in Friday’s win over Philly, also completed all of his passes, going 28-for-28. And you could still argue that the three Bergeron brothers outplayed the two Norrboms, as Quinn, Rhys, and Column Bergeron each recorded multiple blocks in Sunday’s victory over Pittsburgh. Usually, the Norrboms play O and the Bergerons play D, but I’m still hoping for at least one point with all five of them on the field for the Breeze at some point before the season’s over.

Nate Pettyjohn, San Diego Growlers
The 25-year-old cutter enjoyed his biggest game of the season on a night when the Growlers needed it, as San Diego was missing its top four goal-scoring targets on Saturday night against the Aviators. Without Lior Givol, Jesse Cohen, Travis Dunn, or Goose Helton, Pettyjohn erupted for seven goals and 306 receiving yards, dwarfing the next-highest totals on his team in each of those categories. He also added an assist and a block as the Growlers locked up a playoff spot for their third consecutive season.

Sacha Poitte-Sokolsky, Montreal Royal
Maybe no one in the league had a better weekend than Poitte-Sokolsky, who scored 14 goals across a pair of wins over Toronto and Ottawa to vault the Royal right back into Canada Cup contention. The French cutter showed glimpses of his dynamic downfield abilities in 2019, but was perhaps overshadowed by his fellow countryman Quentin Bonnaud, who led the league with 83 goals in 12 games. Enter Poitte-Sokolsky—who celebrates his 26th birthday today!—and is now on a similar pace to Bonnaud’s remarkable clip, scoring 20 goals in his first three games. No one else in the league is averaging more than five goals per game on the season.

Eric Sjostrom, Tampa Bay Cannons
Saturday’s biggest surprise involved one-win Tampa upsetting one-loss Atlanta, and Sjostrom’s was critical to the Cannons success. The Auburn-alum completed all 40 of his throws, finished with 443 yards, and paced the team in plus-minus (+7), as Tampa Bay held off the shorthanded Hustle 21-20. Cannons Coach Andrew Roca knew in the preseason that Sjostrom would only have limited availability to compete this summer, but fully expected that he would be a difference-maker when he could play. Honorable mention shout-out to Tampa Bay’s Bobby Ley, who led the Cannons with five assists, 66 completions, and 620 total yards in their signature win of the season.

Jack Williams, New York Empire
For the second time in as many chances against his old team, Williams, a native of Hickory, North Carolina, tossed the game-winning assist in double-overtime to lift the New York Empire over the Raleigh Flyers. He also finished the game with 549 total yards, five assists, four hockey assists, three goals, and two blocks, but let’s be honest, his sudden death heroics will forever be the most memorable aspect of the Flyers-Empire rivalry. Saturday’s game included some of the wildest overtime sequences in the history of the league, and Williams, who also caught the improbable game-tying goal with one second left in the first OT, thrived throughout the chaos, punctuating the experience with a difficult tight-window inside-flick laser to Jeff Babbitt, who snared the universe-point winner to cap another unforgettable night in New York.