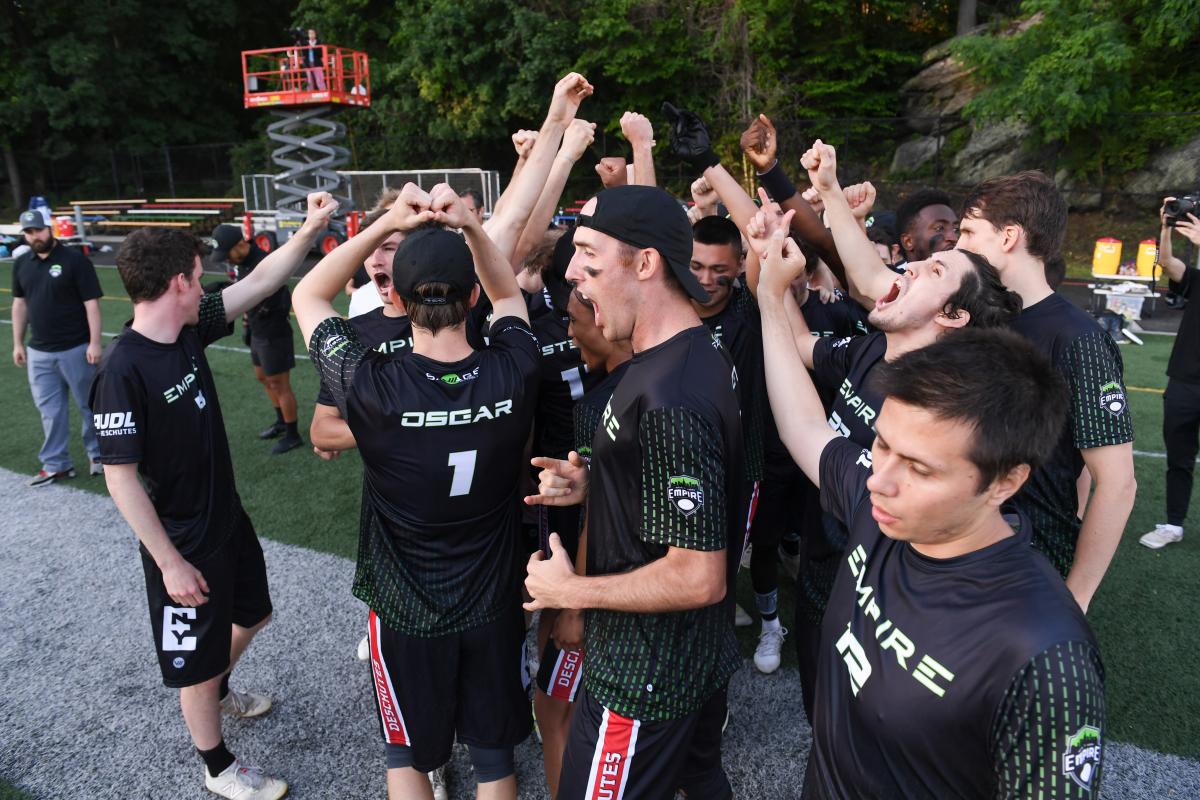 What an exciting return to play from the opening weekend of 2021 AUDL action! And with so much time off, it’s time to discuss a few notable debuts and first impressions from Week 1.

On an offense full of established stars, first year New York Empire cutter Ryan Osgar shined brightest on Friday night. His 8-assist, 385 passing yard debut for the reigning champs is eye-popping on paper, but the reality was even more impressive. Osgar seemingly has limitless release angles with his forehand throws, and once he steps across midfield, he’s a walking bucket from anywhere on the turf. And when he’s forced downfield, Osgar can simply go over the top of defenders, as this hellacious sky from the fourth quarter shows.

Antoine Davis maybe didn’t have the direct scoring impact in his Atlanta Hustle debut we anticipated, but his production in the offense was unquestionable. Raleigh’s defense continually backed Davis, fearing him as a deep threat, and Davis simply obliged their coverage and took gainer routes underneath all day, redistributing the disc back to Atlanta’s primary throwers with ease and keeping them in rhythm.

Peter Graffy, Pat Shriwise, and Keegan North all had solid first showings with the Chicago Union, but were asked to do relatively little given the separation on the scoreboard throughout Chicago’s wire-to-wire win. This weekend against Minnesota should provide a barometer for their fit.

A few more to add later on.

It took no time at all for the expansion team Boston Glory to introduce themselves on Saturday night, putting up 29 goals on the road and looking every bit like a top squad in the Atlantic. Ben Sadok already launched his MVP campaign with 700+ total yards of offense and eight combined scores in his pro debut, relentlessly blitzing open space and churning through Pittsburgh defenders with his legs. The rest of the offense around him are no slouches, either, with Tannor Johnson, Ian Engler, and Henry Babcock giving Glory a dynamic attack from the backfield that can effortlessly switch between smallball efficiency and stretching the field with hucks.

Head Coach Sam Rosenthal talked all preseason about how deep and aggressive off the turn the Boston defense was going to be, and boy was he not kidding. Glory converted a whopping 11 of their 15 break opportunities against the Thunderbirds; they were the best team opening weekend at attacking off turnovers, giving their opposition little to no time to recover. Brendan McCann can quarterback defensive break drives with his deep bag of throws, or Eugene L'Heureux can simply bomb the disc 70 yards in stride with his offhand, backhand rockets to space.

Their bigs can run. They collected 15 blocks as a team, the second highest per game average of anyone from Week 1. Orion Cable might play as good as his name indicates. Boston is going to be a lot of fun in 2021.

With offenses still looking to gel after the extended offseason, defenses feasted in the opening weekend of play.

The two headline individual performances in my mind came from two lesser known players: Minnesota’s Dylan DeClerck and Atlanta’s Brett Hulsmeyer. In a back-and-forth border battle on Friday night, DeClerck and his ballhawking reads were a wrench in the cog of the Madison offense all night long, gumming up lanes and coming away with a league leading five blocks on the night. Hulsmeyer similarly operated in the interstitial spaces on the field, earning four blocks through a combination of heads up reads, deep swats, and then finally, miraculously, the game clinching interception in overtime for the Hustle win at home.

But the list goes on well beyond them. James Pollard and rookie sensation Nate Little were a thrill in Philadelphia Friday night, providing a canopy over the top that stymied most Cannons deep shots for the latter three quarters. New York’s perennially underrated Josue Alorro was practically a coffin for Rowan McDonnell on Friday night, holding the former MVP to his first scoreless game as a pro. Seattle’s Shane Worthington had two big blocks in the first point of the game alone, generating a turn early in a hard fought home win for the Cascades. First year Hustle defender Jakeem Polk locked up 2019 All-AUDL member Jacob Fairfax, emphatically denying an early endzone shot and setting the tone for an Atlanta team that held Raleigh to just four first half points; JP Burns did a similar number on All-AUDL Rookie Team sensation Henry Fisher. Two of San Diego’s new acquisitions—Hunter Corbett and Greg Cohen—made clutch blocks to help seal the Growlers road win, and were constant presences.

I’ve said many times the 2019 AUDL rookie class was the best ever. And it appears that the 2021 crop is eager to challenge that notion.

The aforementioned Little is the feel-good story of the weekend. A native of Philly, Little has been a name Phoenix players frankly have not shut up about all preseason long. Sure enough, the hype was real, as Little’s soaring layout score highlighted a four-goal pro debut, and galvanized the sideline and the stadium on the way to a Phoenix win.

The entirety of the Boston team technically qualifies as “rookies”, but it was the 6’5” Cable who elicited a kind of awe when he took the tha air. Glory didn’t have to use him much in their nine-goal road win, but when Cable came into frame, it was clear his receiving talents are gonna be a force as the season progresses.

And how about the composed performances from Minnesota’s handling duo of Andrew Roy and Will Brandt in the feisty road environment of Madison? Missing All-AUDL centerpiece Josh Klane from the lineup due to injury, Roy and Brandt completed 112-of-116 throws combined against the league’s top defense, effectively getting resets whenever they wanted, and with Roy scoring the game-tying goal with double zeros on the clock at the end of regulation.