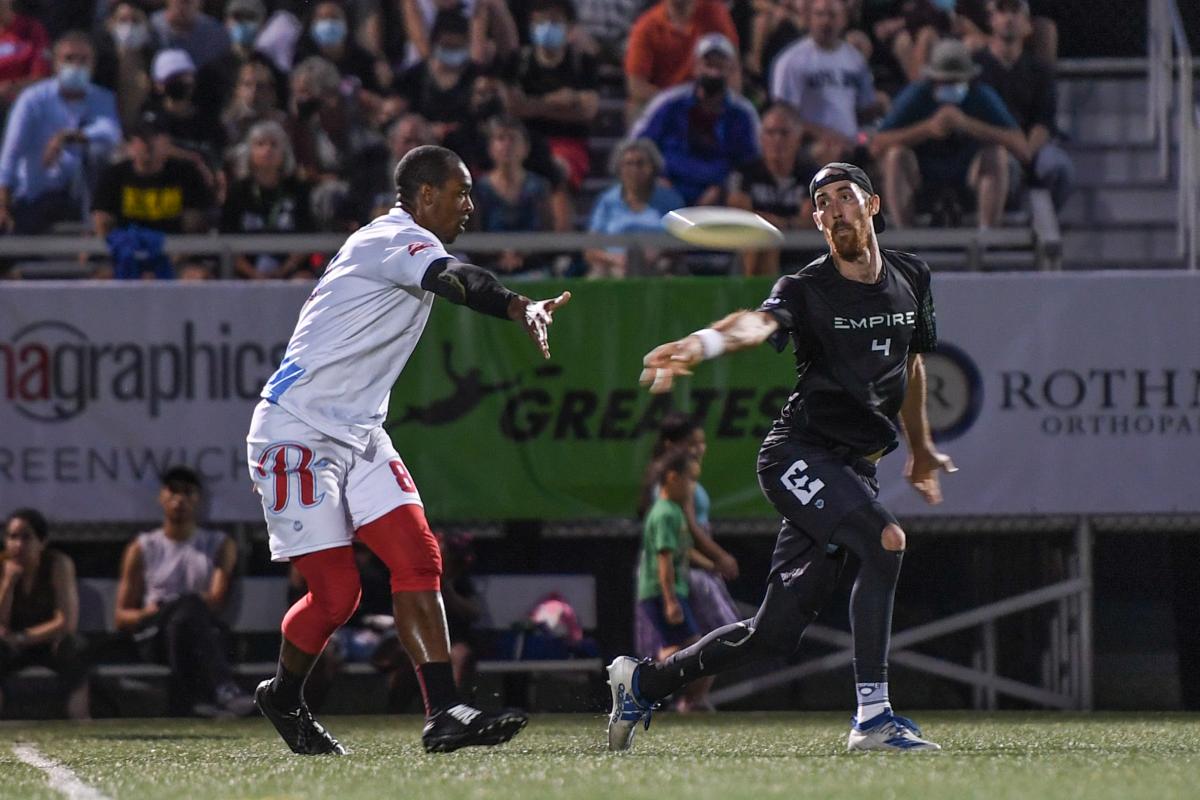 Now the Raleigh Flyers and New York Empire will meet for the third time ever in the 2021 AUDL Championship Game. New York will be defending their throne, while the Flyers are making their first championship game appearance in franchise history.

The two teams met in Week 10 of the regular season. The Flyers forced the first overtime by driving down the full length of the field and scoring with under 10 seconds late in regulation. Raleigh had the disc, a two goal lead, and just 36 seconds remaining in the first overtime before New York utilized trap double team defenses to generate two turnovers, tie the game, and enter sudden death. After each team traded a turnover, Jack Williams found Jeff Babbitt for the finisher and the Empire win; Williams has had five game-winning, walk-off assists or goals in the last two seasons for New York.

The Empire cruised in the semifinal win over San Diego last night, taking a 13-7 lead into halftime before finishing off the Growlers 22-18. New York used a windy day to their advantage to slow down the normally potent San Diego attack by implementing zone defensive coverage, limiting the Growlers to just five huck completions, and forcing 19 turnovers. The Empire were very tidy with their defensive break opportunities, converting 8-of-10 on the day. Babbitt, Ben Jagt, and Marques Brownlee all had three blocks in the game.

Offensively, New York did what they’ve done over the last month of the season: Rely on their stars. Williams finished with a game-high 74 completions, committing just two throwaways while passing for 380 yards and five assists. Jagt finished with 2A-4G-2D and 455 yards of total offense, with Ryan Osgar adding eight total scores and 455 total yards of his own. The Empire have now scored 20-plus goals in nine of their last 10 games.

In the second semifinal of Friday, Raleigh battled back from a three-goal second half deficit to Chicago, forcing the first overtime game in Championship Weekend history, and outlasting the Union 21-20 in the extra period. In a game defined by defense and attrition, Sol Yanuck was once again a rock for the Flyers offense, finishing with 69 completions, five assists, 529 yards of total offense, and just two turnovers.

Nearly every Flyers player made an impact on the game, as has been typical for the league’s deepest team in 2021. Allan Laviolette continued his terrific season, accumulating five total scores and 368 yards of offense, but more importantly, getting two clutch blocks after offensive turnovers. Jacob Fairfax, Henry Fisher, and Terrence Mitchell were fearless in stretching a very good Union defense deep throughout the game, each making their mark with deep scores. And Eric Taylor split time on both sides of the disc as the most dangerous utility player on the field this weekend.

But the real secret sauce for the Flyers success has been their defensive pressure, and the way they apply it throughout all quarters of the game. Still not exceptional at takeaways—Raleigh had just nine blocks against Chicago—Raleigh gets after it with great matchup coverage, particularly in the handler space. Like a boa constrictor, there’s a subtlety with their constriction, and that showed last night as the Union offense held steady for most of the game, but committed a series of errors late in the fourth quarter and in overtime. Seth Weaver, Ethan Bloodworth, Elijah Long, and Noah Saul deserve a lion's share of the credit for their work in the trenches, and for putting Chicago throwers in disadvantageous positions in crunchtime.

Over the last month of the season, the Flyers have been on a revenge tour, knocking off rivals Atlanta and DC in come-from-behind wins; Raleigh is 0-2 against New York, giving them prime motivation on top of their first championship game appearance. But the defending champs have shown consistently in the back half of the season that they own the trophy for a reason, and that may not change tonight on the biggest stage of 2021.