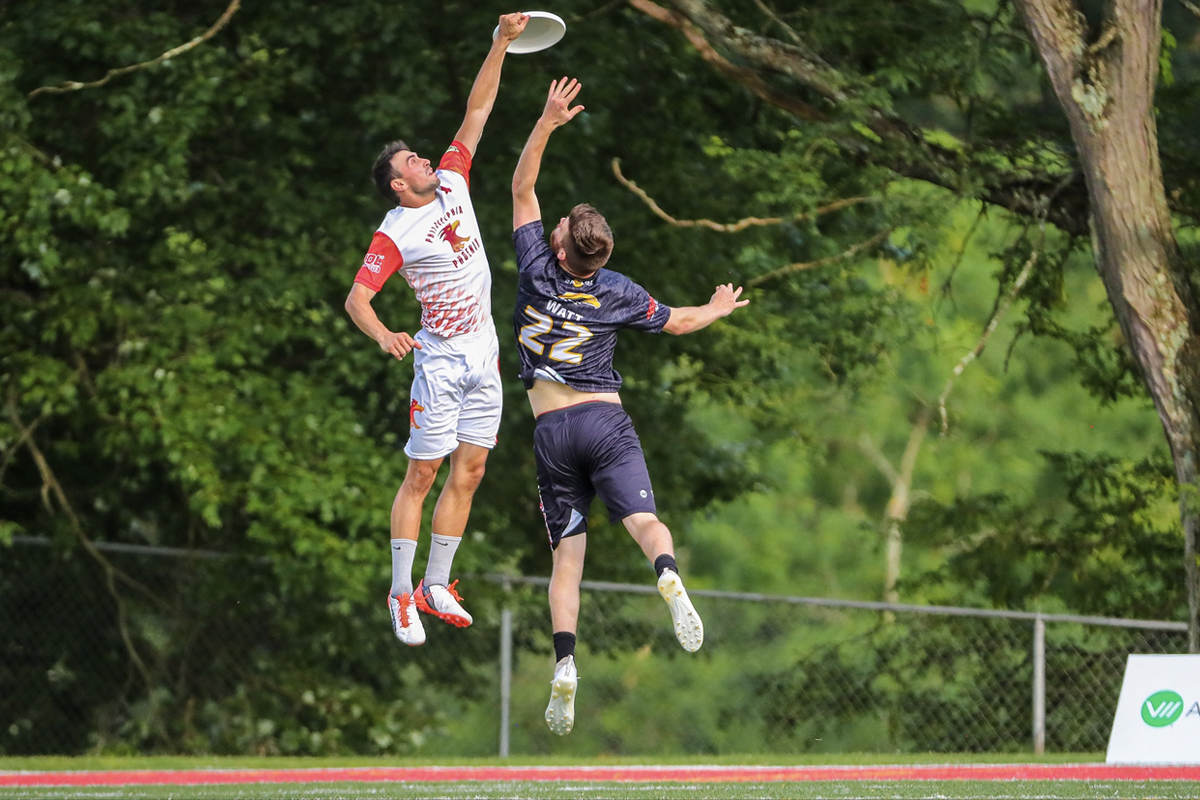 Greg Martin is on pace for 55 goals this season; the current Philadelphia Phoenix franchise record is 45. The current league leader, Martin has easily been Philly’s most dangerous downfield target through the first six weeks of the season. Somehow standing at only 5’10”—I’ll never understand how he’s under 6’0”—Martin plays way bigger than his size, consistently showcasing outstanding athleticism and leaping ability. Every goal feels like a highlight, whether he’s burning his defender on a deep cut or skying the pack on a 50/50 ball. He’s scored at least three goals in every game to this point, but faces a tough matchup this week against a stingy Atlanta defense allowing the second fewest points per game. Still, he found the end zone five times against the Hustle in Week 4; no team has really been able to slow him down.

One game after he put on a show against Philly with seven total scores and over 450 total yards of offense, Antoine Davis was nearly erased by a strong collective effort from the DC Breeze defense this past weekend. He finished with one goal, one assist—his lowest scoring output since Week 1— and a throwaway in a game where the entire Atlanta Hustle offense felt out of rhythm from start to finish. He’ll have a great chance to get back on track at the start of the weekend to build momentum heading into a rematch with DC; the Hustle play the Phoenix on Friday night in the first game of their double header road trip. Davis has the talent and athleticism to be an impact player any given week, and with extra motivation to get revenge on DC this weekend, expect a strong showing in both games.

Leading the Seattle Cascades in total yards this season, Manny Eckert has been a dynamic playmaker on the Cascades O-line through their first six games. He has racked up near-even totals of throwing (959) and receiving (1,078) yards; he’s comfortable in handler sets and knows when to take advantage of deep cutting opportunities from the backfield. His highest yardage output of the season came in Week 4 against Austin, where he ran through the Sol defense alongside fellow hybrid Ben Snell; he’ll look to repeat his dominant home performance against another Texas opponent, as he takes on the Dallas Roughnecks this Friday night. While he struggled against Dallas on the road two weeks ago with his least productive game of the season, the Cascades may need to lean on Eckert this week with neither Snell nor veteran distributor Mark Burton expected to play. It’s the first game he’d play without either of them on the line; whether or not he’s able to get the offense clicking early will be telling for the ‘Scades chances of pulling off the upset.

In a year where the Roughnecks roster has shuffled somewhat significantly week to week, Ben Lewis has been the constant. The veteran defender has regularly made plays on the Dallas D-line, dictating downfield cutters and relentlessly throwing his body around to generate blocks. He’s also switching over to offense more than he has in years past; he’s played 23.8 percent of his points on the O-line this season, up from his previous Roughnecks high of 17.9 percent. Lewis quietly ranks second on the team in plus/minus with 11 blocks and 15 goals on the year—on pace for career highs in both categories. This weekend Dallas faces back-to-back matchups against two pacific northwest teams that like to run and gun; Lewis will look to set the tone on defense as the Roughnecks fight to stay in playoff contention.

Jonny Malks is the AUDL MVP for the first half of the season. If you’re not already watching this guy, I’m not sure why, but I’ll write about him here in case the name recognition still isn’t where it should be. The 22-year-old has burst onto the scene this year as DC’s most reliable—and entertaining— handler; he’s completed over 98 percent of his 284 throws with 20 assists and nearly 1,700 throwing yards. Simply put, he just has his way with every defense, combining a creative arsenal of throws with opportune hucks and relentless small ball motion. While he came into the season with just 39 points of AUDL experience, he runs this DC offense like a savvy vet, and there’s a flair to his game that oozes confidence beyond his years. Malks’ dynamic throwing ability was on full display this past weekend in Atlanta, as he sliced and diced through the Hustle zone with little impediment; he’s been the driving force behind DC’s offensive success and should remain a focal point in this week’s rematch vs. Atlanta at home.

Jack Williams’ presence was clearly missed in the Empire’s Week 5 loss to DC, and he came back to the lineup with one of his best games of the season this past weekend vs. Philly. He set season highs in assists, completions, and throwing yards, and reminded us all of his hybrid versatility. While rightfully known for his quick-twitch initiating cuts, Williams makes a case for best handler on the team with his effortless ability to get open in small spaces and deliver high percentage throws; he’s completed 123 of 127 throws this season, leading the Empire in completion percentage (96.9 percent, min. 50 throws). An especially dynamic asset in the red zone with decisive give-and-gos, he has three-plus scores in every game he’s played this season and should keep the streak going against a Boston Glory team allowing the fourth-most points per game in 2021.

Jordan Kerr has been everything the San Jose Spiders could ask for through the first half of the season. The rookie out of BYU has been the Spiders’ most impactful all-around player, ranking first on the team in goals (11), third in assists (10), first in blocks (6), third in receiving yards (811), and second in throwing yards (980). If you watch him, there’s this calm ease to his play. He excels at finding and maintaining spacing in the offense at all levels, whether he’s striding downfield for chunk gains or working with Spiders handlers to facilitate the offense. He’s shown great control both with and without the disc; the poised lefty is completing 95.9 percent of his throws this season and has at least four scores in every game. In a big game this week against Dallas, look for him to rise to the occasion as the Spiders’ primary O-line weapon.