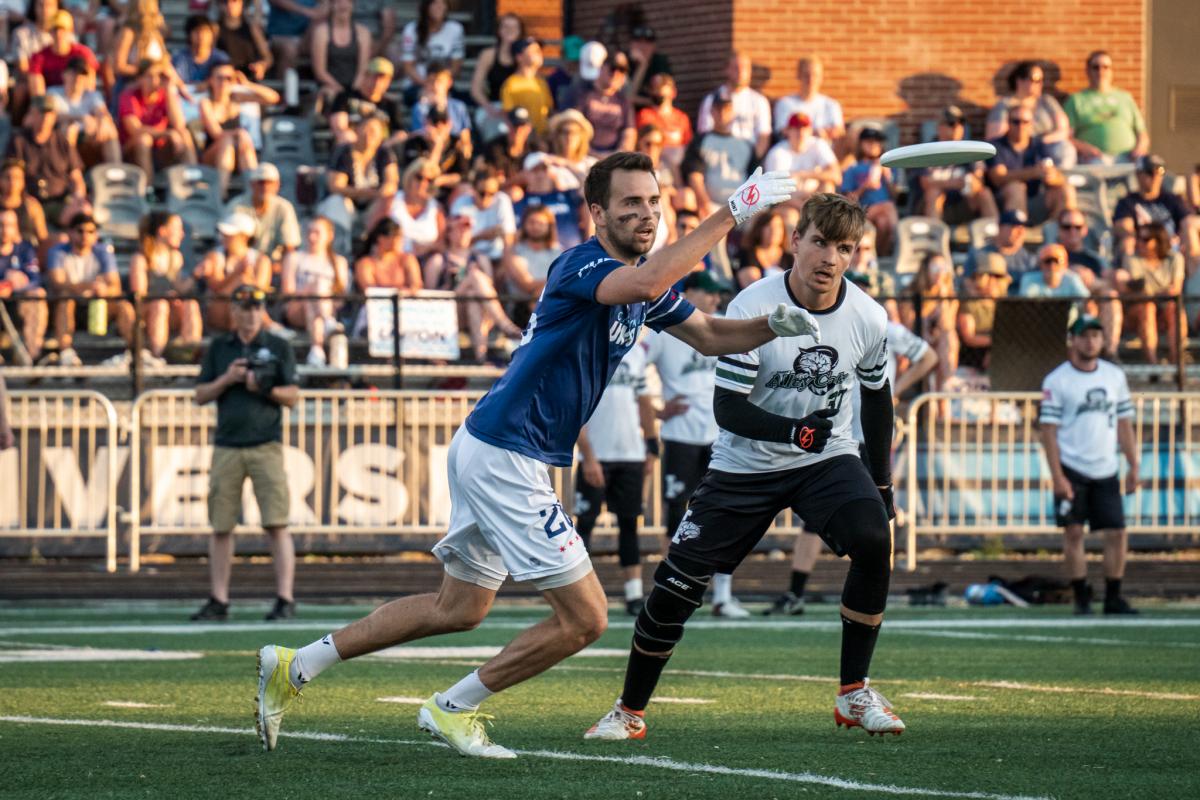 Newly appointed captain Ben Sadok looked to be the key component of this Boston Glory offense in Week 1, as he racked up 463 throwing yards and 272 receiving yards against a Pittsburgh defense that simply had no answer for him. Sadok stayed in rhythm virtually all game, carving up the defense with quick-hitting throws and cuts alike. The 735 total yards was the third-highest single-game mark of the week, though he could have his work cut out for him against an Atlanta defense that stymied the Raleigh Flyers offense for an entire half, holding them to just four first-half points. The Hustle did allow two players—Flyers sophomores Sol Yanuck and Eric Taylor—to record over 500 total yards, so if the volume is there for Sadok as it should be, the numbers should follow in a tough Week 2 test.

The league’s third all-time leading goal scorer was clutch in Atlanta’s Week 1 overtime win. The guy who epitomizes “Hustle,” franchise staple Matt Smith led the way with a game-high four goals, including a pair of posterizing skies. He also threw the game-winning assist with 45 seconds left in the game, flipping a cheeky scoober over the mark to put the Hustle up 19-18. The four goals comfortably topped his 2.5 goals per game average from the prior two seasons, as he enters the 2021 season on a rejuvenated Hustle team with what is likely their most talented roster to date. With impressive small-space cutting ability and the speed to stretch the field, Smith thrives on this Hustle O-line that moves the disc quickly and efficiently between a multitude of hybrids. In Week 2 he’ll match up against a dynamic Boston defense that held Pittsburgh’s Max Sheppard to just two goals in Week 1. Don’t be surprised if he’s once again called on to perform in the clutch.

This past weekend was a first for 2018 AUDL MVP Rowan McDonnell: Rowan failed to record a goal or assist for the first time in his career last Friday night against the New York Empire. He followed it up with a one goal, one assist performance in a decisive 24-10 win over the Tampa Bay Cannons the next night, taking a combined stat line of 1-1-0 into a Week 2 matchup with the Raleigh Flyers. Not the start most anticipated for a player that has averaged nearly nine scores per game over the last two seasons. Held out of the end zone by New York and failing to see many opportunities in a low-scoring affair against Tampa Bay, Rowan is primed to explode against Raleigh. Arguably the best game of his career came the last time these two teams met; in 2018 Rowan launched his MVP campaign with a 10-goal, two-assist, two-block (including a Callahan) performance to take down the Flyers 25-24 in DC. Rowan is still every bit as involved in the offense as he was in 2019; he led the team in receiving yards against Tampa Bay and completed 49 of 51 throws for the weekend. The scores will come, and the matchup with Raleigh should spark Rowan to regress back to his absurdly high scoring mean.

Peter Graffy had a quiet debut for the Chicago Union in Week 1, but he didn’t need to do much with the Union playing with a lead for the final three and a half quarters. Graffy played 17 of his 19 points anchoring the D-line alongside Chicago veteran Kurt Gibson, facilitating the counterattack with patient disc movement and quick give-and-go’s. He threw just one assist—although another was dropped in the end zone—while recording no goals and no blocks in his Union debut. He totaled 241 combined yards, second on the D-line behind only Gibson. In his last four games against Minnesota dating back to the start of the 2018 season, Graffy has averaged 3.8 assists, 2.8 goals, and 1.3 blocks per game. As he continues to find his footing in the Chicago system, we should see his statistical output increase as the season goes on.

After a one-year hiatus, Bobby Ley is back with the Tampa Bay Cannons and will make his 2021 debut this Saturday. Ley had back-to-back seasons with 750-plus completions with the Cannons in 2017 and 2018 before heading to Raleigh to play with the Flyers in 2019. He immediately slotted in as their primary distributor, with the offense almost molding around him in a way that made every teammate better. Now back in familiar territory, the high-volume handler will look to reignite his chemistry with All-Star Andrew Roney as the two look to pick apart the Pittsburgh Thunderbirds defense this week. In 2018—the last time the two played together—Roney and Ley combined for an other-worldly 99 assists, 41 goals, 30 blocks and 1,389 completions at a 95.4 percent completion rate. They will drive this offense throughout the season and will account for the vast majority of the team’s scoring output.

Jordan Kerr made his AUDL debut last week against the Seattle Cascades, and he had about as efficient a game as one could’ve hoped for the San Jose Spiders. The former D1 Men’s Player of the Year played an even split of O-points and D-points—11 each—and looked comfortable on the AUDL field, totaling three assists, three goals, and over 300 combined yards of offense in his first game. His usage will be worth monitoring going forward, as the team tries to find the best fit for him on the new-look Spiders roster. One thing is certain: the kid has a tremendous floor, and should only get better as the season goes on. Kerr’s well-rounded skill set should loan itself well to a balanced Spiders attack; look for him to keep things going as he makes his home debut this week in a rematch against Seattle.

Travis Dunn had a somewhat quiet Week 1 by his standards, tossing three assists and scoring one goal in a 19-16 win over the Los Angeles Aviators. The San Diego Growlers offense as a whole got off to a slow start; the retooled squad may take some time to reach its potential, but a Week 2 rematch with LA at home presents a perfect opportunity to get back on track. For Dunn, he averaged 4.0 assists and 2.8 goals per game against LA in five meetings in 2019. His scoring output the past two seasons has been one of the most consistent in the league, as he’s totaled over 100 assists and over 70 goals in that span. In what looked like a similar role in the Growlers offense as we’ve seen in years past, he finished third on the team in completions in Week 1 and totaled 260 total yards of offense. While his yardage output should remain somewhat consistent, it remains to be seen whether his scoring numbers dip this year with more mouths to feed on offense, especially with Khalif El-Salaam set to make his Growlers debut in Week 2.