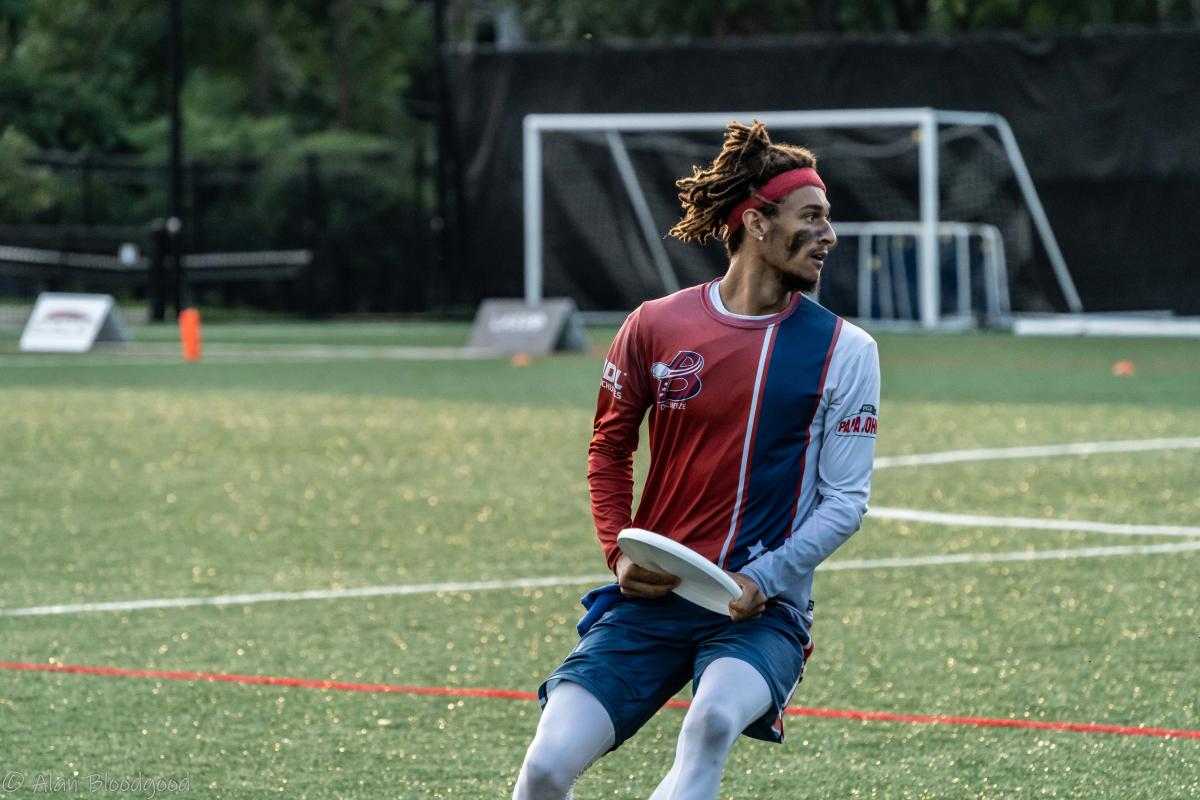 Is MVP Rowan returning to form? Through his first nine games of the season, Rowan McDonnell eclipsed 300 total yards in a game just once, a game that also marked his only time topping 100 receiving yards. In his last three games, Rowan has eclipsed 300 total yards in each of them, while averaging over 150 receiving yards per game. He’s visibly getting downfield more than he was for the bulk of the season, no longer feeling constrained as a facilitating handler in the DC Breeze backfield. Things have opened up in recent weeks for both Rowan and the Breeze, as they’ve been picking up the pace of their offense; they’ve scored an average of 25 goals per game over their last three, coinciding with Rowan’s most productive total yardage stretch of the season. While the goal scoring still isn’t where it was in 2018 and 2019—Rowan has yet to score multiple goals in a game this season—the way he’s being used is starting to feel more like “the Rowan years” iteration of the Breeze offense.

AJ Merriman enters the playoffs after concluding one of the best all-around seasons in the league. After being named to the All-AUDL Rookie Second Team in 2019, Merriman made the sophomore leap and is a huge reason for DC’s top five ranking in defensive efficiency, points allowed per game, and blocks per game. AJ was one of five players this season to record at least 15 assists, 15 goals, and 15 blocks—his 19-15-20 stat line nearly doubled his 2019 totals of 5-9-11. With good size and athleticism, he’s been a force in the air, attacking the disc with great timing whenever it’s in his vicinity. His offensive game improved significantly from year one to year two, as he now lays claim to one of the strongest backhands on the D-line to complement his versatile cutting ability. Against Raleigh this season Merriman has looked solid, totaling an assist, four goals, and a block in the two prior meetings. Raleigh boasts one of the most dynamic cutting cores in the league; Merriman and the D-line may once again be depended on to make plays late in the game to come away with the win.

Allan Laviolette has had a career year in 2021. The sixth-year AUDL veteran finished the regular season with career highs in assists (36) and scores (59), repeatedly standing out as one of the most dynamic threats on the Raleigh Flyers O-line. On a team full of offensive hybrids, he was the sole Flyer to finish the regular season with 1,500-plus throwing yards and 1,500-plus receiving yards. Laviolette’s knack for finding the end zone was on full display all year, with an astounding 21.2 percent of his completions going for assists—no player in the league had a higher assist rate. Laviolette is not afraid to shoot after chewing up chunk gains in the intermediate space, however DC has done a fantastic job limiting his touches this season. He completed just 20-of-22 throws in the two games against DC and was held under 300 total yards both times; against all other opponents he averaged over 385 yards per game. Laviolette will look for a bounce-back game after being held to his lowest yardage output of the season in the Flyers’ Week 12 double overtime loss to the Breeze.

40-plus assists. 40-plus goals. 10-plus blocks. Only a handful of players have reached these numbers in a single regular season, and prior to 2019 only one player had done it twice. Ben Jagt has now reached 40-40-10 in three consecutive seasons. This AUDL record could stand, and even be built on, for a while; averaging over eight scores and one block per game is a ridiculous pace to keep up for any extended period of time. Yet that’s exactly what Jagt’s done over the last three seasons. He’s essentially matched his MVP numbers from 2019, coming just seven assists and two goals shy of his scoring numbers, while exceeding his blocks total by five. In Week 8 against the Hustle, the 2021 AUDL receiving leader recorded a season-high 502 receiving yards with nine scores despite matching up with a towering lineup of Atlanta bigs all game. It’s tough to see Atlanta limiting him in the playoff rematch this Saturday.

Jeff Babbitt’s best defensive game of the season came against Atlanta, as he recorded a season-high four blocks against a very efficient Hustle offense. The strong safety-linebacker hybrid accounted for 40 percent of the team’s takeaways in the game, including the massive block that gave New York a chance to force overtime on the final point. Babbitt covers ground like few others in ultimate, constantly lurking and reading the field, then using his unmatched athleticism to put himself in position to make plays. He concluded the regular season with five blocks in his last three games to bring his season total to 16; he’s never finished with fewer than 16 blocks in any of his five seasons in the league. The Empire’s go-to cutter on the counterattack, Babbitt also scored 23 goals this season and could easily make his impact on both sides of the ball come Saturday.

While he’s been the primary driver of the Atlanta Hustle offense since the start of the season, Austin Taylor has become Atlanta’s unquestioned workhorse over the last few games. In the Hustle’s final two games of the regular season, Taylor totaled 104 completions; no other player had more than 30. His most recent game included masterful 13-assist display against Pittsburgh, a team he thrashed for an absurd 2,000 total yards of offense in just two meetings this season. Accounting for 34.2 percent of Hustle throwing yards over his last three games, the team is leaning on their star handler like never before, though the usage has led to higher turnover numbers—Taylor has seven throwaways over his last three. Heading to New York this week to take on the Empire for the second time this season, he’ll look to repeat his flawless 41-of-41 throwing day that came in Atlanta’s Week 8 win over the defending champs.

Antoine Davis lit it up this season. One of the more unstoppable playmakers in the division, once Davis found his rhythm in the Atlanta offense, it was game over for opposing defenses. In his final four games of the season, Antoine totaled 30 scores, five blocks, and 1,799 yards of offense. A relentless deep cutter with throws that demand respect, he’s a constant matchup problem that can work at any level of the field. His best game of the season came against New York the last time these teams met, as he racked up three assists, six goals on 19-of-19 throws in the Hustle victory. Davis can challenge any of New York’s athletes, and with the season on the line, expect to see him more determined than ever to make game-changing plays.