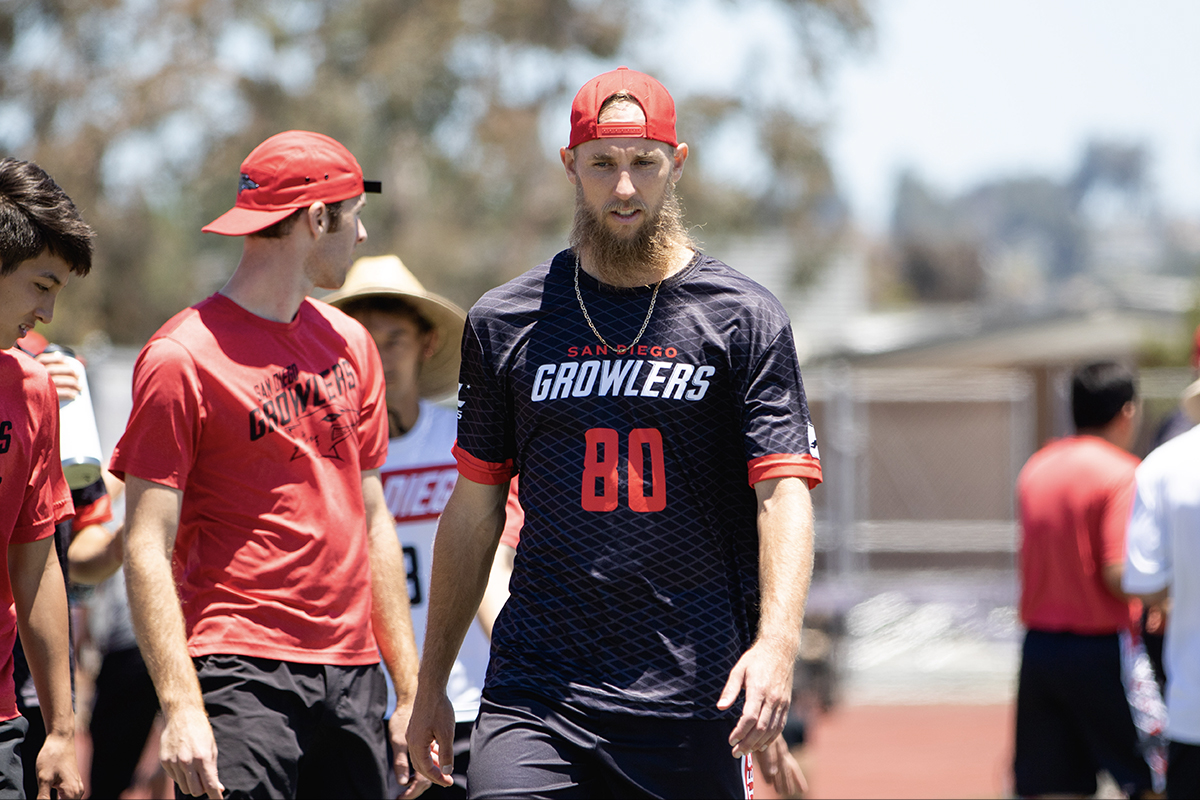 Another year, another MVP-caliber performance for the San Diego Growlers franchise star. In the regular season, Travis Dunn scored a goal or recorded an assist on 29.6 percent of his points played, the highest single-season scoring rate of his career. He finished with 300 completions, his third consecutive season with 300-plus, and his 94.9 percent completion rate also marked a career high. Travis gets it done at every level of the field, comfortable in his midfield striker role as both a thrower and deep receiver. There’s an ease at which he plays, as he’s able to facilitate the offense in any spot and doesn’t get overly aggressive looking for the end zone. Dunn had his best game of the season when San Diego beat Dallas in Week 4, totaling six assists, three goals, and 465 yards of offense on a 28-of-29 throwing day. With the season on the line, expect San Diego to lean on their best player to carry them to Championship Weekend.

A new addition in 2021, Lior Givol has become a consistent focal point of the Growlers offense this season. While he started the year filling the Sean Ham goal-scoring role—he scored 21 goals with five assists in his first six games—the Growlers have turned him loose as a thrower in recent weeks, as Givol is averaging nearly 150 throwing yards and three assists per game over his last four. The Growlers have won each of those games while averaging 21.8 points per game, up from their 19.3 average in the seven games prior. Givol has been punishing defenses that have forced him to work underneath, showcasing his ability to catch and shoot from midfield. The expanded role has made the Growlers offense less predictable as a whole, and we’ve seen its efficiency climb as a result. Givol’s re-emergence as a dual threat will give Dallas one extra wrinkle to deal with, as the Growlers look to build on a five-game, 20-plus goal scoring streak.

Since switching to the O-line full time in Week 7, Gabe Hernandez has thrived as the primary distributor in the Roughnecks backfield. The last time he played against San Diego, Hernandez completed 67-of-68 throws for 219 yards and two assists, routinely dissecting the San Diego defense with little resistance from the center handler position. With Chris Mazur returning to the lineup in Week 10 against Austin, Gabe shifted into more of a hybrid role, getting downfield significantly more than we’d seen from him throughout the season. He finished the game with 424 total yards, including 215 receiving yards, with six total scores, including two goals—all single-game career highs. It still feels like Hernandez has yet to reach his potential as a premier weapon in the Roughnecks offense, which is scary considering the results so far; Dallas is 5-0 this season in games where Hernandez plays 70 percent or more of his points on offense.

MVP watch for the face of the Chicago Union franchise. Before this season, Pawel Janas never really had enough talent around him to truly enter the MVP conversation; the best Chicago team Pawel played on previously was last season’s 7-5 squad that lost to Pittsburgh in round one of the playoffs. Wins play a big role in the award, and with a shallow roster, Chicago consistently struggled in that category despite Pawel throwing more assists than anyone in league history over a three season stretch. This season, Janas is checking nearly every box as a leading candidate: 10 wins, 50 assists, one of the best completion rates (97.4 percent) among high-usage handlers, and over 6,000 total yards of offense. Leading this Chicago team to their first ever playoff win, and Championship Weekend appearance, with a stellar performance in Sunday’s game could be exactly what Pawel (and the team) needs to assert himself as an MVP favorite.

A bit of an unsung hero this season, Ross Barker has quietly put together his best season as a pro. Despite the influx of talent headlined by Pat Shriwise and Keegan North, Barker has shined on the Union O-line all year after playing mostly defense in 2019, seamlessly switching back to his primary cutting role that saw him score 80 times in 2018. In 2021, Barker has 62 scores in 11 games (5.6 per game), and his 2,554 receiving yards lead the team by a significant margin—no other Union cutter has reached even 1,500 for the season. He’s also been notably more reliable with the disc in his hands this year than he was in his last full season playing offense, completing 94.9 percent of his throws this year compared to 91.2 percent in 2018. The former University of Wisconsin wide receiver has a total of 16 scores in three games against Minnesota this year; expect Chicago’s top target to stay active in the fourth and final meeting.

Dylan DeClerck is in the midst of his best defensive season since his 2016 rookie year. With 22 blocks, DeClerck finished the regular season one block shy of the league lead after back-to-back three-block performances against Indianapolis and Madison. He’s recorded three or more blocks in five games this season, tied with Atlanta’s Brett Hulsmeyer for the most three-block games in 2021. One of those games came against Chicago in Week 6, when the Wind Chill defeated the Union 20-18 on the road to move into first place in the division. DeClerck may be the best matchup defender on a defense that ranks second in the league in efficiency, though he’ll have his work cut out for him against a Chicago team that turns the disc over less often than any other team in the league. If DeClerck and the defense can get takeaways early, they’ll set the tone for what should be a tight game throughout.

An obvious Rookie of the Year candidate, Andrew Roy has been the backbone of the Minnesota offense since Week 1. He seized the opportunity at center handler with teammate Josh Klane missing the first few weeks of the season, and even after Klane’s return to the lineup, Roy has been every bit as critical to Minnesota’s offensive success. He finished the regular season with 624 completions, most in the league and the lone player to reach 600-plus in 2021. He paced the O-line with a 96.9 percent completion rate, providing a reliable presence in the backfield all year. Minnesota has struggled with turnovers in recent weeks, recording 20-plus as a team in three of their last five games, including their last game against Chicago. If the Wind Chill plan on keeping pace with the high-powered Union offense, Roy’s going to play a big role in optimizing their offensive efficiency.