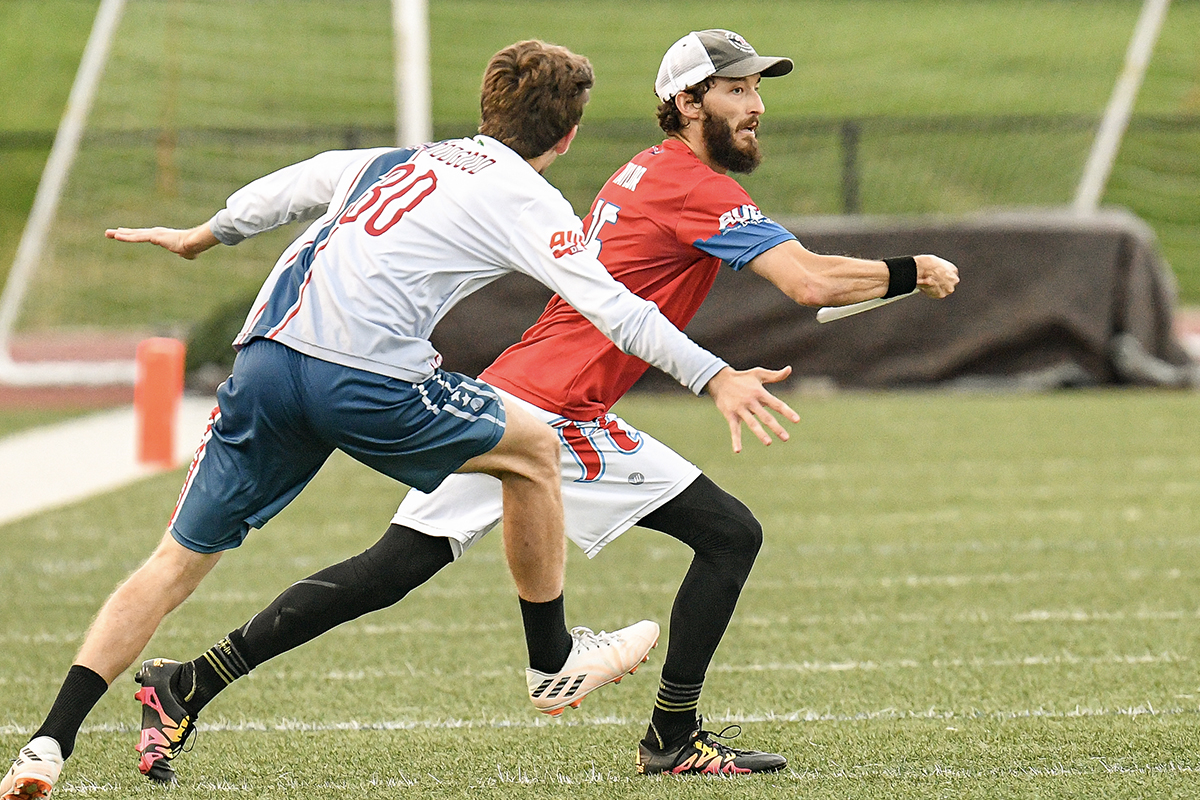 Sometimes (a lot of the time?) you can’t help but watch Ben Jagt and think “this is just not fair.” The league’s scoring leader is having a near-identical season to his 2019 MVP campaign, averaging 4.3 assists, 4.0 goals, and 1.2 blocks per game compared to 4.5, 4.5, and 1.1 a season ago. Jagt’s plus/minus of +70 is 15 points higher than the next closest player, and he still has two games remaining in the regular season to boost it closer to the +90 he reached in 2019. Using every inch of his 6’6” frame, Jagt is the best deep cutter in the game and consistently looks unguardable, timing his cuts to get in position early for towering skies. He’ll take on a new opponent in Week 12, as the New York Empire host Boston for the first time this season. With at least seven scores in every game he’s played against non-DC opponents and Boston allowing the fourth most points per game in the league this year, expect the scoring to continue in Week 12’s never-before-seen rivalry game.

AJ Merriman’s development from his rookie to sophomore season has played a huge role in propelling this DC Breeze defense to elite status. With 17 assists, 14 goals, and 18 blocks, Merriman has contributed in every facet of the game, locking down opposing cutters and being a force on the counterattack. Aside from his numbers this year, which are astounding considering he’s played over 80 percent of his points on defense, Merriman has given this defense life as the D-line’s main energy guy, pumping up his teammates and coming through with momentum-shifting plays all year. As a player who shines in the spotlight—he had one of the best single-game performances of the season against Boston in the Week 3 Friday night DraftKings game—the stage couldn’t be set much better for Merriman this week: He’ll take on the number one scoring team in the league, in primetime, with home playoff game implications on the line.

In a loaded lineup of throwers, Zach Norrbom has been DC’s most efficient handler this season. The lefty is completing 98.1 percent of his throws with 17 goals and 17 assists—among all handlers completing 98 percent or better, Norrbom’s 34 scores ranks first. He’s maintained an aggressiveness all season to finish drives in the red zone, while still operating within the possession-based DC offense; Norrbom leads all Breeze handlers in yards per completion (8.3) and scores per game (3.8). Up against the fourth most efficient defense in the league this week, Norrbom and the Breeze handlers will look to stick to their script and control the clock early, taking their time to convert offensive possessions and gradually wear down the defense. Zach sat out the first Raleigh game with an injury; look for him to make up for lost time in DC’s toughest test in over a month.

“When we played in Boston, I felt like we had way too many mouths [to feed], and our D really needs a stopper.” Raleigh Flyers Head Coach Mike DeNardis had Eric Taylor playing extensive minutes on D-line for the first time in his young career last week, a move that paid dividends in the Flyers improbable comeback win over Atlanta. Taylor finished with two blocks—the first multi-block game of his career—and added a goal playing eight O-points and 10 D-points on the night. His best play of the game didn’t even show up in the stat sheet: In a tied 18-18 game with four minutes remaining in the fourth quarter, Eric Taylor shut down an Austin Taylor reset cut to force an upline throw that was easily poached and intercepted by Elijah Long, leading to the go-ahead score late in the fourth. Whether Taylor moves back to offense or continues to split time evenly remains to be seen, but either way, expect the Flyers’ best all-around player to be a difference-maker this week against the 8-2 DC Breeze.

While he’s been quieter from a scoring standpoint than previous seasons, Chicago’s offensive leader is trending as an MVP candidate. Pawel Janas is currently completing 97.3 percent of his throws this season—2021 would be the first year he finishes over 97 percent—and he has amassed over 5,300 total yards, most in the league. Janas’ impact has been undeniable; it’s no coincidence that his two worst games of the season were the same two games that the Union failed to win. After a one-game absence that saw the Union struggle through a win against Detroit, Pawel is back in the lineup this week, and with 45 assists on the year—he trails league leader Bobby Ley by one—he’ll likely need one of his highest assist totals of the season if he wants to (which, he doesn’t) finish as the league assist leader for the fourth straight season.

This Sunday, the Madison Radicals will look to become the first AUDL team to reach 100 franchise wins. And there’s no one more jacked for it than captain Kevin Pettit-Scantling. If there was ever a player that could have a performance that wills their team to the 100-win milestone, it’s KPS, the eighth-year vet and emotional leader of this team. He comes into the final game of the season with the most well-rounded stat line of his career: 16 assists, 23 goals (career high), and 19 blocks with 145 completions (career high). With four or more blocks this week—a number he’s reached on two separate occasions in 2021—he could not only push for the regular season blocks title, but fuel the Radicals’ break opportunities and allow the defense to fight for the win. Regardless of how he finishes in the stat sheet, KPS’s leadership alone will play a huge role in Madison’s chance for victory.

Periodically moving between O-line and D-line this season, Bryan Vohnoutka seems to thrive wherever he’s placed in the Minnesota Wind Chill system. He shifted back to O-line this past weekend after back-to-back games playing mostly defense, and the results speak for themselves; Vohnoutka exploded for 10 assists, six goals and two blocks in Minnesota’s Week 11 double header against Detroit and Indy. It’s tempting to keep him on offense when we’re reminded of what he can do, but with O-line contributors Rocco Linehan, Michael Jordan, and Charles Weinberg all expected to return to the lineup this week, Vohnoutka will likely be moved back to defense where he played last time the Wind Chill and Radicals met. The result of that game? A 25-19 Wind Chill victory. One of several strong matchup defenders, B-Von and the Wind Chill defense will look to clamp down on Madison to prevent them from reaching their 100-win milestone.