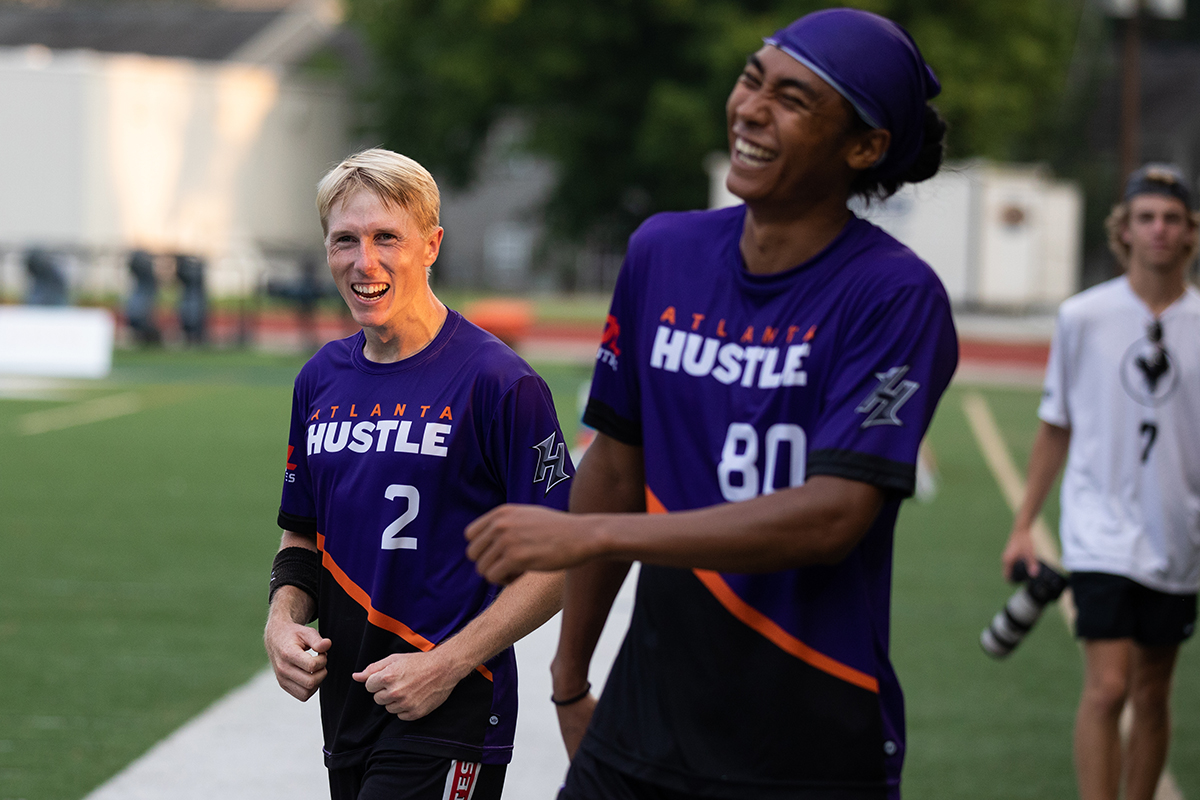 With his French counterpart Quentin Bonnaud out with injury this season, Sacha Poitte-Sokolsky has basically taken on the entirety of Bonnaud’s goal scoring output. Bonnaud scored 83 goals in 2019, averaging 6.9 per game. Poitte-Sokolsky has 20 goals in his first three games, averaging 6.7 per contest. The second-year Montreal Royal cutter earned All-AUDL Rookie Second Team honors in 2019 and looks to be taking the sophomore leap, consistently producing timely cuts within the flow of the Royal offense. He’s been a reliable target for a talented core of throwers, chewing up chunks of yardage and taking full advantage of opportunities to attack the end zone. Pointe-Sokolsky is coming off his best game of the season, where he racked up 433 receiving yards and eight goals against Ottawa, and will look to keep his early season momentum going in a Thursday night Outlaws rematch.

Jack Williams reminded everyone of his household name this past weekend, shining in primetime against his former team for the second time in as many seasons. Williams had his best game of the year against Raleigh, finishing with eight scores—including the game-tying goal in overtime and game-winning assist in double overtime—and two blocks in the New York Empire win. Williams has thrived taking on added responsibility in the backfield this season; he’s averaging eight more completions per game than he did in 2019, and he’s completing a career-high 96.9 percent while averaging five scores per game. With Ryan Osgar not expected to suit up Friday night against Philly, Williams could be looking at a slight role shift as the team looks to fill Osgar’s downfield striker position. Jack has proven consistently he can play any position on the field—wherever he’s used, expect the scoring to continue from the Empire’s most versatile offensive weapon.

With Parker Bray moving to a primary D-line role after returning from injury in Week 9, Austin Taylor took full control of the Atlanta Hustle offense against Pittsburgh. In his most recent game, Taylor set season-highs in assists (9), completions (46), throwing yards (732), and total yards (956). He’s just the second player to eclipse the 700-throwing-yard mark in a game this season, as Taylor covered the entire field with an array of throws from either side of his body. With the ability to launch precision hucks to an athletic core of cutters, Taylor has the throws to get the most out of his teammates and has been the team’s clear-cut offensive MVP through the first 10 weeks of the season. He’ll look to get the team back on track after a demoralizing upset loss to Tampa Bay—a game in which Taylor and a slew of starters did not play—in the Week 11 Game of the Week against Raleigh.

Antoine Davis has been on a tear over his last two games, totaling seven assists, 10 goals, and over 1,100 yards of offense while completing 34-of-35 throws. After missing his first Hustle game this past weekend, Davis will do everything he can to make sure the team picks up where they left off at the end of July—winners of four straight coming off their highest scoring output of the season. In the game following Atlanta’s Week 6 loss to DC, Davis went off for six scores, a block, and nearly 400 yards of offense on a perfect 19-of-19 throwing day in Philly. Able to work at all levels of the offense with relentless speed and opportune throws, Davis has been everything Atlanta fans could have hoped for in his first season with the team. He’s playing some of the best ultimate of his career and only seems to be getting better as this offense continues to click. Raleigh is about to see a much different Antoine than they saw in Week 1.

Henry Fisher’s worst game of the season came against Atlanta in Week 1, but after hitting his stride through the Raleigh Flyers’ seven-game win streak, he’ll have a chance to redeem himself in primetime this Saturday. The Hustle have several defenders standing 6’4” or taller, making them better suited than any other team to contain the 6’6” Fisher; he was held to just two goals and 149 total yards in Week 1 with two throwaways. Since Week 3, he has averaged over 350 total yards and five scores per game. Working in rhythm with a dynamic core of hybrids, Fisher has consistently been stretching the field as the Flyers’ top deep option, and he’s also flashed versatility in the intermediate space with improved throws. Taking on the Atlanta bigs won’t be easy, but if Fisher is able to find space early against the Hustle zone, he could prove tough to stop in an offense loaded with talent.

Will this be the first year since 2016 where Chicago’s Pawel Janas doesn’t lead the league in assists? Bobby Ley is trying to make it happen, as he’s been launching discs downfield nonstop as the primary shooter in the Tampa Bay Cannons offense. Ley has range on both the forehand and backhand side, and he has the Cannons averaging more huck attempts per game than any other team in the league (14.1). With 46 assists on the year, he currently has a one-assist lead on Janas, each with just one game remaining this season. This last game may be Ley’s toughest test yet; DC allows an average of 16.2 points per game, the lowest in the league, and in Week 1 held Tampa Bay to just 10 goals. With Ley averaging 6.1 assists per game over his last seven, the Cannons should continue to lean on their star handler in their final game of the season.

While the same could surely be said about plenty of other San Diego Growlers players, Tim Okita likes playing LA. Okita has totaled five-plus scores three times this season; each time has been against the Aviators. A backfield rock over the last two seasons with San Diego, Okita has completed over 98 percent of his throws in the regular season dating back to the start of 2019. Against LA alone this year, he has just one throwaway, having completed 119-of-120 throws across the three games. Okita excels at initiating the Growlers offense with small ball movement and sure throws to initiating cutters. He didn’t miss a beat last week despite the Growlers missing the majority of their starting O-line, completing all 34 of his throws while tossing four assists. He’ll take on the Aviators for the final time this week, as the Growlers look to #beatLA and secure a home playoff game.