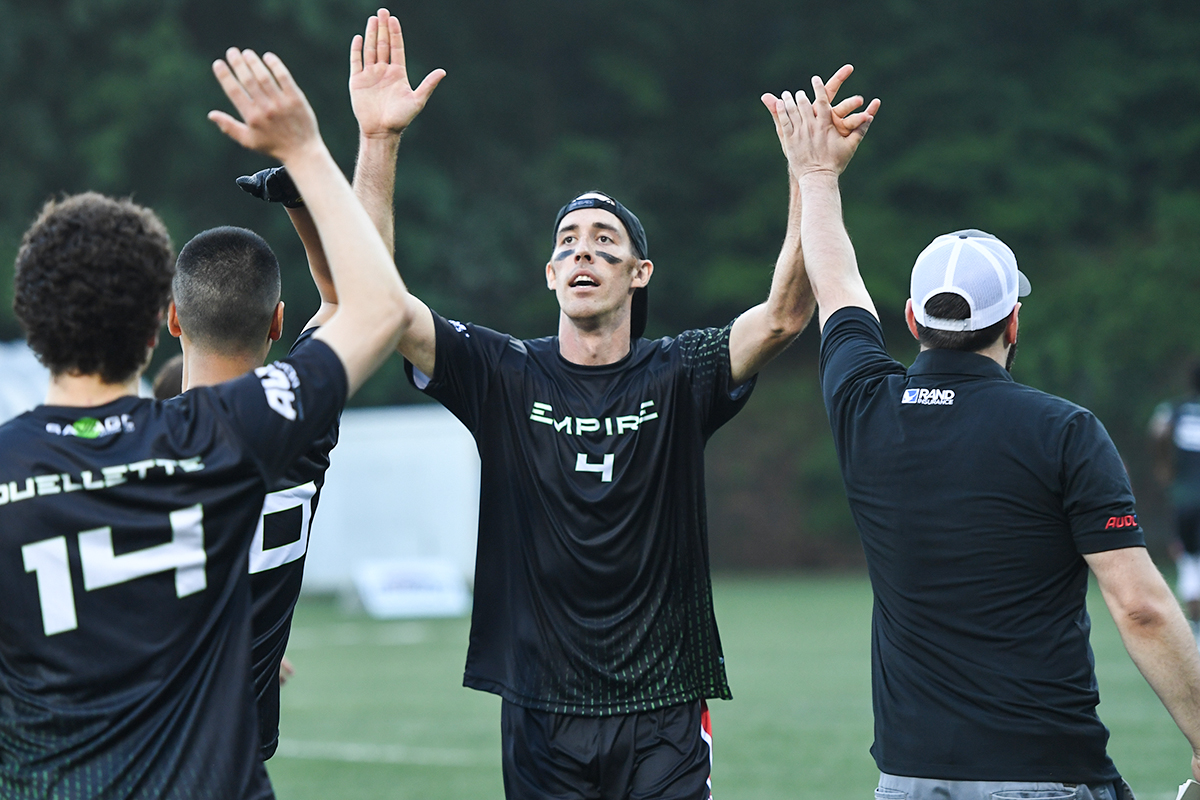 One of several hybrid cutters in the red hot Raleigh Flyers offense, Allan Laviolette has been on a tear throughout the Flyers’ six-game win streak. Laviolette came into last weekend’s game against Pittsburgh with 290-plus yards of offense in four straight games, with 21 scores in that span. It all led up to his best game of the season, where Laviolette racked up 11 total scores—seven assists and four goals—and 550 yards of offense against the Thunderbirds, carving up the defense all night on just 24 touches. Working in tandem with one of the league’s best cutting cores featuring Henry Fisher, Jacob Fairfax, and Anders Juengst, Laviolette has thrived having consistent downfield targets that allow him to maximize his impact as a thrower. Raleigh is sure to be tested this weekend in a tough double header road trip, but if Laviolette and the offense can maintain their rhythm, there’s little opponents can do to stop the highest scoring team in the league.

While they didn’t pick up a win in the opening weekend of the Canada Cup, the Montreal Royal showed flashes of impressive offense in their first game of the season. Sixth-year Royal vet Kevin Quinlan, one of just four active players to have played in every AUDL season, came out firing as the offense’s primary striker, tossing three assists and scoring four goals while completing all 24 of his throws against Ottawa. Showing off his versatility in the Royal system, Quinlan opened up the offense with reliable initiating cuts followed by aggressive continuation throws; he finished with 448 total yards and averaged over 10 yards per completion. While he’ll likely be without his top 2019 target Quentin Bonnaud (injury) for the bulk of the season, Quinlan still possesses the throwing talent to turn any Royal cutter into a downfield threat on any given point, and he should again be among the team’s scoring leaders in 2021.

Somehow feeling like an under-the-radar MVP candidate this year, Ben Jagt hasn’t lost a step since his 2019 MVP campaign. Maybe we just expect it at this point, but Jagt has actually put up better numbers through his first seven games of 2021 than he did in 2019—he’s the lone player to have reached 60 scores this season, and he’s done it in just seven games. No player has averaged more receiving yards than Jagt’s 365 per game, as he’s proven to be as unguardable as ever in his seventh season, routinely finding opportunities to stretch the field and score on overmatched defenders. His turnover numbers have improved too; Jagt’s on pace to finish with his highest completion percentage of any season he’s played with the Empire, currently completing 92.8 percent of his throws. With a highly anticipated rematch against Raleigh this week, the 6’6” powerhouse will look to repeat his other-worldly 15-score performance in the teams’ 2019 meeting.

Chris Mazur returns to the Dallas Roughnecks roster this weekend for his third game of the season in a must-win Battle for Texas. Mazur was instrumental in the Roughnecks’ ability to compete on their trip to SoCal back in Week 4. Immediately slotting into his comfortable primary handler role, Mazur led the team in throwing yards, completions, and assists in two games against LA and San Diego. He brought a new dimension to the offense with a willingness to shoot deep, and he showed impressive command considering the fact he hadn’t played with Dallas since 2017. As the Dallas offense looks to find its rhythm, Mazur could be the missing piece that returns this team to form.

After Dylan Tunnell’s surprise appearance for Atlanta in their Week 2 win over Boston, I thought we were unfortunately done with former AUDL MVP cameos for the season. Thankfully, I was wrong! One of the best pure throwers in the world returns to the AUDL field this Saturday, as the San Diego Growers signed 2017 AUDL MVP Jonathan Nethercutt to bolster their roster ahead of a Week 10 battle with LA. Nethercutt is the type of player that can transform an offense, unlocking new cutting opportunities whenever he has the disc in his hands. Nutt ranks 12th all-time in career assists with 228, despite playing just 41 AUDL games—he averages the second most assists per game in league history. With the potential to have a game-changing impact, it remains to be seen how he’ll fit into the Growlers system, but there’s little doubt his presence will be felt in the third SoCal rivalry game of the season.

20-year-old Danny Landesman is making the leap this season for the Los Angeles Aviators. As an 18-year-old rookie, Landesman put the league on notice with 28 goals in nine games, establishing himself as a primary scoring threat for an Aviators team that went 9-3 in 2019. The 2019 All-AUDL Rookie First Team selection clearly has one of the highest ceilings of any young player in the league, but improving on his rookie totals was going to be no easy feat coming into 2021. Or so I (incorrectly) thought. Landesman’s per game averages have basically gone up across the board; he’s averaging 6.2 scores per game in 2021, up from 4.3 in 2019. Most notably, he’s been much more involved in the offense as a thrower, with his completions per game doubling from 9.8 to an even 20.0 this season. He’s found a rhythm taking on more of a downfield hybrid-type role—he’s quickly becoming a “cutter with throws” rather than just a goal scorer. Teaming up with 2019 All-Star Sean McDougall has been huge for his development; expect the duo to rise to the occasion this week in a must-win game in San Diego.

Nick Boucher and the Ottawa Outlaws announced themselves to the league two weeks ago in the opening weekend of the Canada Cup. After more than two years since his last AUDL game, Boucher immediately shattered the AUDL single-game yardage record in his first game of the new season, totaling a whopping 1,223 yards with 11 assists (also a 2021 single-game high). Boucher was dropping pinpoint hucks throughout the game from either side of his body, hitting receivers in stride repeatedly in a dominant performance from the entire Outlaws offense. On the strength of Boucher’s debut, the Outlaws converted on 90 percent of their offensive points and became the first team this season to score 25-plus points twice in the same weekend. With nearly 2,000 total yards through his first two games, look for Boucher to continue piling on yardage as the centerpiece of the Outlaws offense.