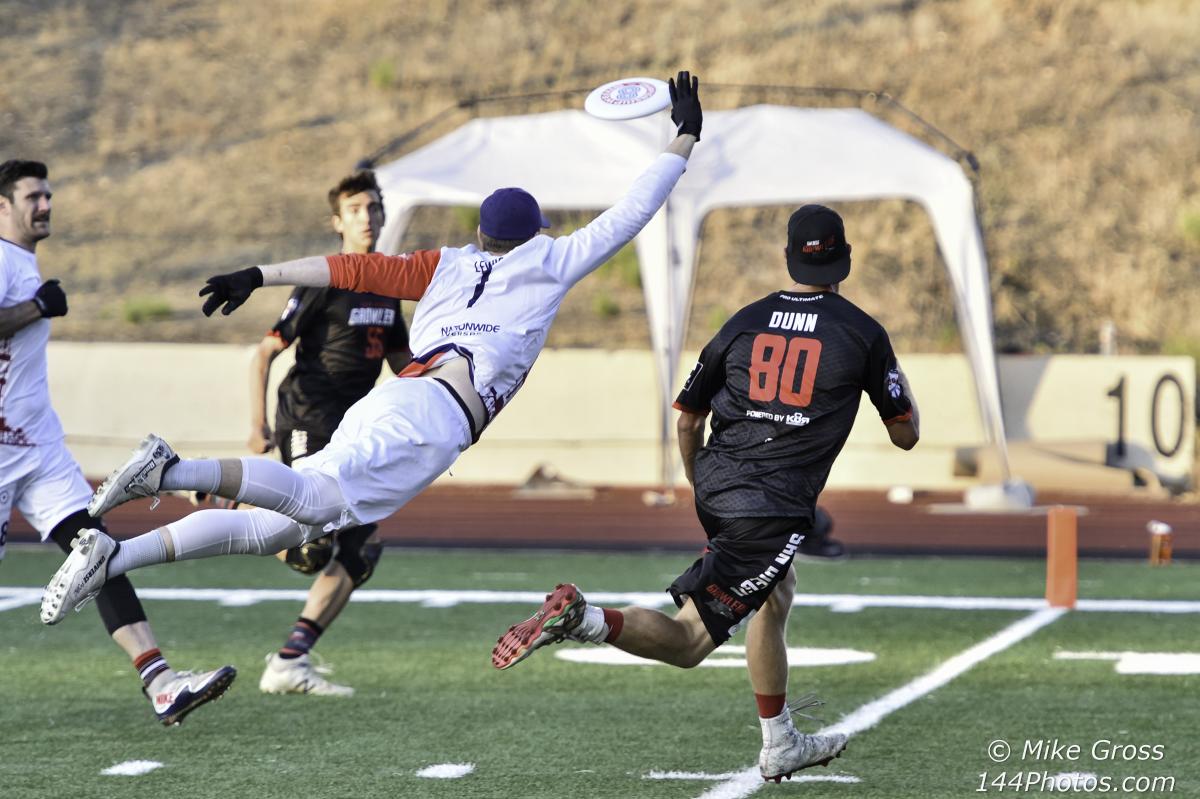 After struggling to pull away from the Aviators in the first half, the Dallas Roughnecks offense found its rhythm and put up 14 second half goals on their way to a five-goal win in LA last night. They now face the second leg of their SoCal back-to-back tonight in the AUDL Game Of The Week against the reigning division champion San Diego Growlers.

For the third straight game this season the Dallas offense struggled to get off the starting blocks. Without All-AUDL handler Abe Coffin last night, and a flight delay that caused a late arrival for half the team, the Roughnecks showed disjointed disc movement for much of the first half. Chris Mazur, making his first start with the team in 2021, was a ballast for Dallas with his big throws, using his flick huck to stretch the LA defense and keep the Roughnecks in attacking position. Coffin is expected to join the team in San Diego tonight, and his pairing with Mazur in the Roughnecks backfield will give them one of the most potent handler batteries in the AUDL.

Jay Froude, Kyle Henke, and Thomas Slack provided much of the downfield spark for Dallas, with Henke putting the exclamation point on the night with a big splashing layout in the fourth quarter. One of the fastest receiving corps in the league, Henke and Froude use their tremendous athleticism to operate as the initiators, getting open at will and often striking for the endzone when on the attacking half of the 50 yard line. Slack did what he does best all night against the Aviators, functioning as a read-and-react receiving target, and blitzing open spaces with his dynamite footspeed and nearly preternatural disc hawking instinct.

Dallas did settle down, largely thanks to Matt Jackson and Kaplan Maurer working into a groove in the third and fourth quarters. Both throwers love to keep pace with their feet, using throw-and-go action to unglue and unlock stagnant offensive sets. As they build into their roles in this developing Roughnecks lineup, they look like great complementary pieces alongside the bigger throws of Mazur and Coffin.

San Diego, for their part, have also had issues establishing a flow on offense. They’re still a top five unit in terms of efficiency, but the Growlers are scoring 19.50 goals per game, putting them middle of the pack in the AUDL; San Diego was second in the league during their semifinals run in 2019. Tim Okita, Travis Dunn, and big free agent add Lior Givol all look great in the opening month of the season, but the slight uptick in overall turnovers is slowing down the talented Growlers attack. Dunn already has 14 assists and seven goals in the first third of the season, and is racking up over 300 yards of total offense per game.

But the deciding factor for San Diego so far in 2021 has been the play of their defense. The Growlers are always hunting, averaging the fourth most blocks per game in the AUDL, and able to constrict opposing offenses for quarters at a time; they held LA to a zero-goal fourth quarter in Week 2. Newcomers Zac Schakner and Khalif El-Salaam have been crucial in the clutch in the team’s wins, with El-Salaam often marshaling San Diego’s counterattacking drives.

Tonight will come down to which offense can convert more consistently while withstanding the bombardment of layout attempts from these aggressive defenses. Both teams specialize in takeaways, and will be looking to apply pressure at the point of attack. Dallas will be telling early: They might hold some rhythm from their win last night, but if their legs give out, the Growlers will be looking to take advantage.