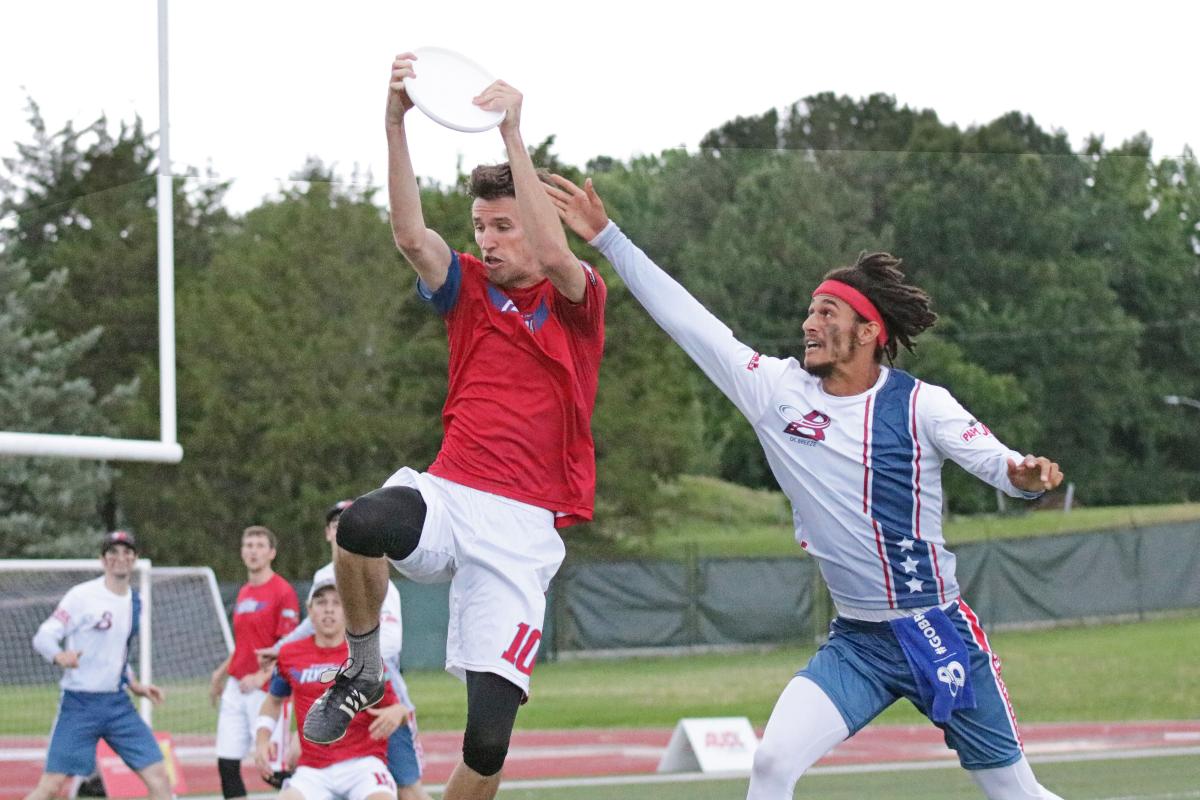 Available to watch live on AUDL.TV at 6:00 PM/ET

Tonight is the second “Game Of The Week” matchup of the season between the Raleigh Flyers and DC Breeze, as two of the top Atlantic Division teams meet to determine home field advantage for the 2021 AUDL playoffs. The Breeze won 25-24 in Raleigh in Week 2, but the Flyers have won eight of their last nine games, and tout the number one scoring offense entering the final weekend of the regular season.

DC and their number one scoring defense, however, are up to the challenge. AJ Merriman has emerged as a bonafide star in coverage in his second season as a pro, ranking sixth in the AUDL in blocks (18) and leading a Breeze team that is second in takeaways per game (12.1). Rhys Bergeron, Quinn Bergeron, and rookie Ben Green have also developed into premier defenders in coverage, but the Breeze’s defensive rotations go well beyond their top block getters; Green is not in the lineup for tonight.

The Breeze have not allowed an opponent to score more than 17 goals in their last six games, surrendering just 14.8 goals and going 5-1 during that stretch. The 24 goals the Flyers scored in Week 2 was a season high for the DC defense; Raleigh was 20-of-21 on red zone chances, and still lost by a goal.

The real potency from the Breeze D-line, though, comes from their counterattacking. Merriman has 31 total scores as a primary defender, the second most of any player in the AUDL with 18-plus blocks in 2021. David Bloodgood remains an assassin from the defensive handler spot, averaging 6.6 yards per completion while tossing 11 assists and completing 94.6 percent of his throws. Bloodgood is listed as questionable heading into tonight's game. All three Bergeron brothers can be threats with or without the disc, and Green is a breakaway receiving threat on turns.

The Flyers are coming off one of their more cathartic wins in franchise history, going on a 5-0 run to close out the game and win 20-18 over their rivals from Atlanta in Week 11. Allan Laviolette continues his torrid stretch of play, now with six straight games of at least five total scores and 290 yards of total offense; he’s averaging 3.8 assists, 2.7 goals, and 448 total yards of offense in his past six games. The entire Raleigh offense is clicking, but the steady excellence of Sol Yanuck in the backfield has allowed the Flyers to really settle into their roles. In his last two games, Yanuck has eight assists, 145 completions, 1050 throwing yards, and just five throwaways, allowing the team to experiment more with lineup variations, and finding great success using Elijah Long and Eric Taylor as plug-and-play fits on both offensive and defensive rotations.

And after a slow start to the season, 2019 All-Star and All Rookie First Team member Henry Fisher has come on of late. Fisher has 13 goals in his last three games, and is averaging 249 receiving yards per game for the year. He also has a block in each of his last three appearances, and has 10-plus completions in every single game of 2021.

Raleigh’s defense has quietly been one of the best in the league since the end of June. In their last eight games, the Flyers have allowed 20-plus goals just once in Week 11 double overtime against the Empire and their number two scoring offense. The team will be without franchise and season blocks leader David Richardson tonight, so the Flyers will need a big night from Connor Russell and company to slow down DC’s talented “J&J Roofing” duo of Joe Merrill and Joe Richards.

Even though both teams have already qualified for the postseason, tonight’s skirmish will be a de-facto playoff game with the high stakes at hand. With Championship Weekend 10 being hosted in DC, the Breeze have a shot to play the entire postseason in front of a home crowd. Raleigh has made the postseason every season of their six-year existence, but has not qualified for Championship Weekend since their inaugural season in 2015; a home playoff game for the Flyers would go a long way towards achieving their goal of reaching the final four again.