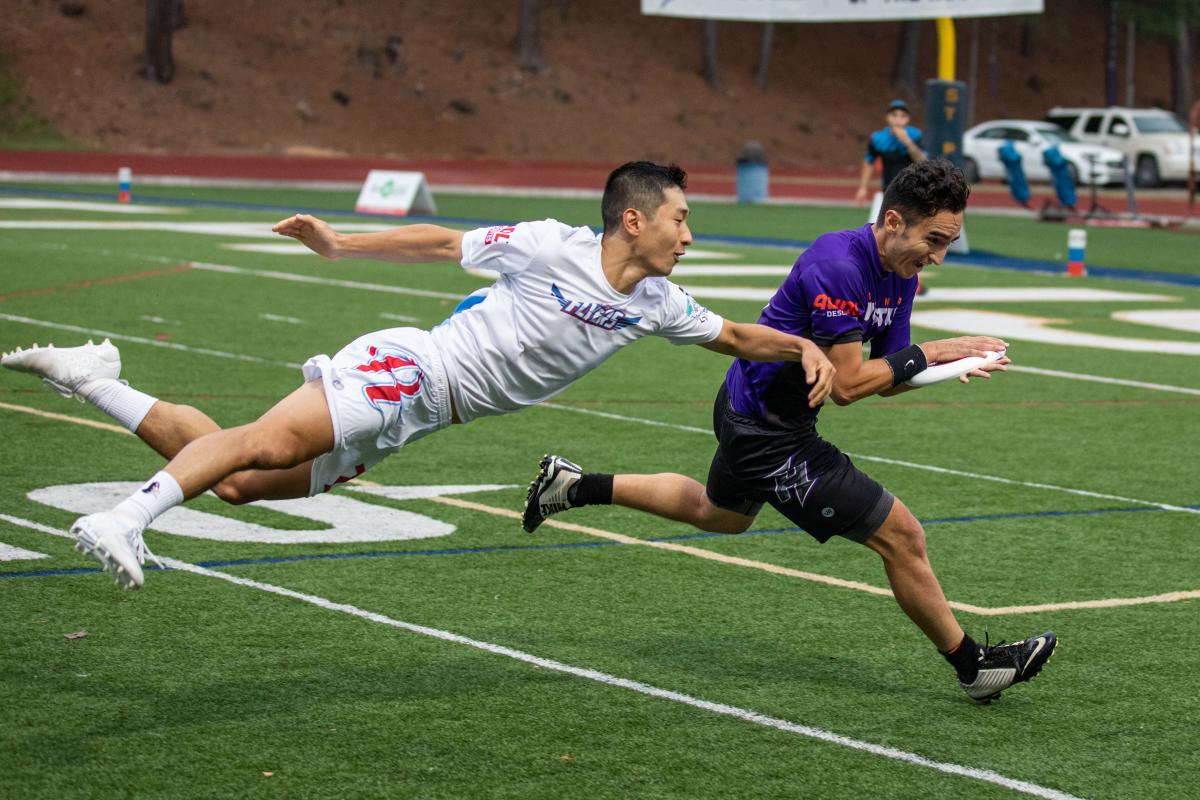 Available to watch live on AUDL.TV at 6:00 PM/ET

The Atlanta Hustle and Raleigh Flyers meet in a rematch of their Week 1 overtime thriller for tonight’s AUDL Game Of The Week. The Hustle outlasted the Flyers 19-18 in their first meeting as Atlanta held Raleigh’s number one scoring offense to just four first half goals.

Both teams are in the thick of the Atlantic Division battle to host a home playoff game—Atlanta is tied for first place at 8-2, while Raleigh sits a single game back at 7-3—but both teams are also coming off one-goal losses in Week 10. Always a hotly contested rivalry matchup, tonight’s Atlanta-Raleigh tilt takes on added importance as each squad needs to get back on track with the playoffs looming just two weeks away.

Despite holding a lead late in the first overtime, Raleigh suffered another heartbreaking loss in double overtime to New York in last week’s showcase game. The defeat snapped the Flyers’ seven-game winning streak, but Raleigh is still playing some of their best ultimate of the season. They’re averaging a league-best 24.1 goals per game in 2021, and have eight games with 20-plus scores.

The return of Eric Taylor to the lineup last weekend, after missing the entire month of July, was a huge boon to an already loaded Flyers offense. His playmaking as a thrower kept Raleigh’s offensive attack potent all night long against a stout Empire defense last Saturday, as Taylor finished with a game-high seven assists on 31 completions.

But the real engine for this Flyers team’s offensive success has been the midfield attacking duo of Allan Laviolette and rookie Anders Juengst. Now in his seventh professional season, Laviolette is having a career year, and has really turned up his play since the middle of July. In just his last five games, Laviolette has 20 assists and 12 goals, and is averaging nearly 450 yards of total offense per game. Juengst is playing just as hot, racking up 23 goals in his last five appearances; he is currently tied for third overall in the AUDL with 39 goals; Juengst also has 20 assists and 242 completions (97.2 percent), and is averaging 131 throwing yards per game for the year.

Atlanta was more than up to the task of slowing down the Flyers offense on opening weekend, utilizing their zone looks to hold Raleigh to their lowest scoring output of 2021. But after starting the season with a series of masterful defensive performances—including a 17-13 stifling of the Breeze in DC on July 17—the Hustle D-line has been more porous of late, allowing 20-plus goals in each of their last three games. Atlanta is still third in the AUDL in goals allowed per game (17.8).

Brett Hulsmeyer was a huge presence in the first meeting with Raleigh, intercepting the Flyers’ final pass of overtime and finishing with a game-high four blocks. Hulsmeyer currently sits second in the league in takeaways with 20, and has been one of the most disruptive defensive players in the AUDL in 2021. Alongside teammates Jakeem Polk, Kelvin Williams, and JP Burns, Hulsmeyer helped shutdown Raleigh’s potent deep game in Week 1, and will need to have a similar effort tonight if Atlanta wants the road win.

And while the Atlanta defense has loosened slightly in the past few weeks, the Hustle offense is clicking better than ever. Austin Taylor had an MVP caliber performance against New York three weeks ago, and has four straight games with at least four assists, 30-plus completions, and 270-plus throwing yards. Antoine Davis is playing the most efficient ultimate of his career while still remaining dangerous as a downfield striker; Davis has seven assists and 10 goals in his last two games, and is completing a career-high 95 percent of his throws in 2021, nearly six full percentage points better than his career average rate.

Both offenses rank in the top five of the league in efficiency, which could turn tonight’s matchup into a barnburner quickly if the Flyers figure out Atlanta’s zone early.