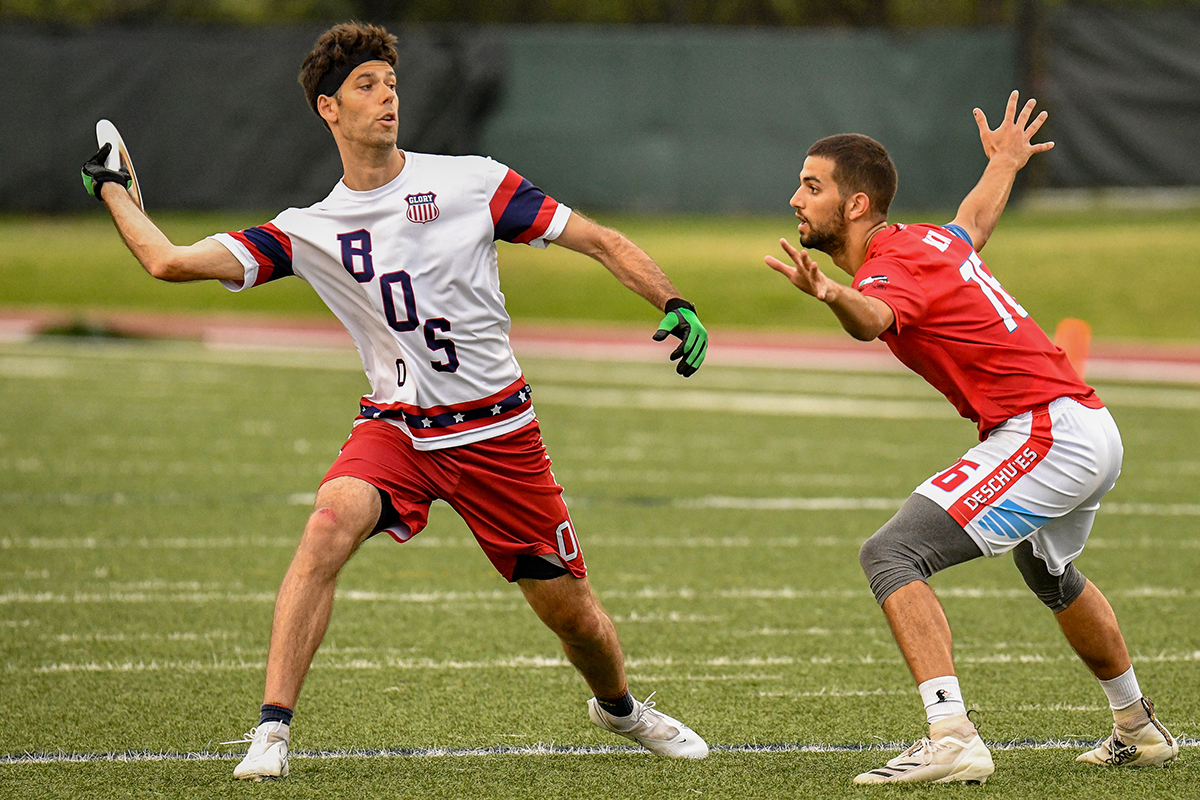 Tonight the Raleigh Flyers (6-2) travel up to Boston for the first leg of their first double header road trip of the season. They’ll take on a Boston Glory (3-4) squad narrowly holding onto playoff hopes in the Atlantic Division.

After dropping their first two games by one goal each to start the season, the Flyers have won each of their last six games, albeit against inferior competition; none of the six wins came against teams currently in playoff position in the division. Still, the Flyers have won those six games by an average of over nine goals per game, including four double-digit wins.

Tonight they’ll face the team that started the winning streak in Boston. The Flyers edged out Boston 27-24 for their first win of the season back in Week 3. The Raleigh offense couldn’t be stopped in their first matchup, as the Flyers O-line converted a season-best 76.9 percent of their offensive possessions. Five players finished with at least five scores (assists plus goals) in the game: Jacob Fairfax, Matt Gouchoe-Hanas, Anders Juengst, Allan Laviolette, and Eric Taylor. Alongside Henry Fisher and Matthew McKnight, these seven form a young, dynamic O-line core capable of beating their opponents a variety of ways, from smooth small ball motion to quick-strike hucks.

The Flyers deep game has looked unstoppable during their winning streak, as Fairfax, Fisher, and Laviolette have hit their respective strides both as receivers and throwers. In this offense there’s a consistent deep option on nearly every possession, and the throwers have learned to look for them, and connect, early and often. After hitting just 6-of-14 hucks (42.9 percent) in their first two games to start the season, they’ve now gone 58-of-88 (65.9 percent) on throws of 40-plus yards in their last six games, including connecting on 10-plus each of the last four. This offense is loaded with elite hybrids, and with Eric Taylor making his return to the lineup this week after missing the last four games with injury, the Flyers’ playmakers will continue to have options at all levels.

The Boston defense is going to have its work cut out for them, to say the least. The unit has struggled this season, having allowed an average of 23.4 points per game, third-worst in the league. They’ve allowed 20-plus in all but one game this season, as most of their games have ended up as shootouts. With all of their struggles, they still have managed to record eight-plus takeaways in six of seven games; their 10.7 average ranks sixth in the league.

The Glory offense features two of the most consistent impact players in the league: Ben Sadok and Tanner Halkyard. Averaging over 600 total yards per game, Sadok is the only player in the AUDL that leads his team in both throwing and receiving yards. In addition to being the team’s primary distributor, Sadok has the speed and quickness to release from the backfield and open up huck opportunities for his fellow handlers. Halkyard provides a big downfield target that’s as comfortable working underneath as he is boxing out and skying over defenders in the deep space. Sadok and Halkyard have combined for 91 total scores this season, scoring at the second-highest rate among any teammate duo in the league.

The offense adds back a huge piece this week: Tannor Johnson is expected to return to the field for the first time since Week 1. The 6’4” cutter gives the offense a second dynamic big alongside Halkyard that is just as versatile, if not moreso, capable of moving the disc in the backfield in addition to having the ability to stretch the field at will. He has a legit MVP-level skill set that can change the trajectory of this team heading into the final weeks of the season.

Boston’s defense will hope to contain the Flyers red hot offense, but this game is more than likely going to be yet another shootout for the league’s 22nd franchise. With Johnson and Taylor returning from injuries, the two near-full-strength offenses will look to limit mistakes in what could be the highest scoring game of Week 10.