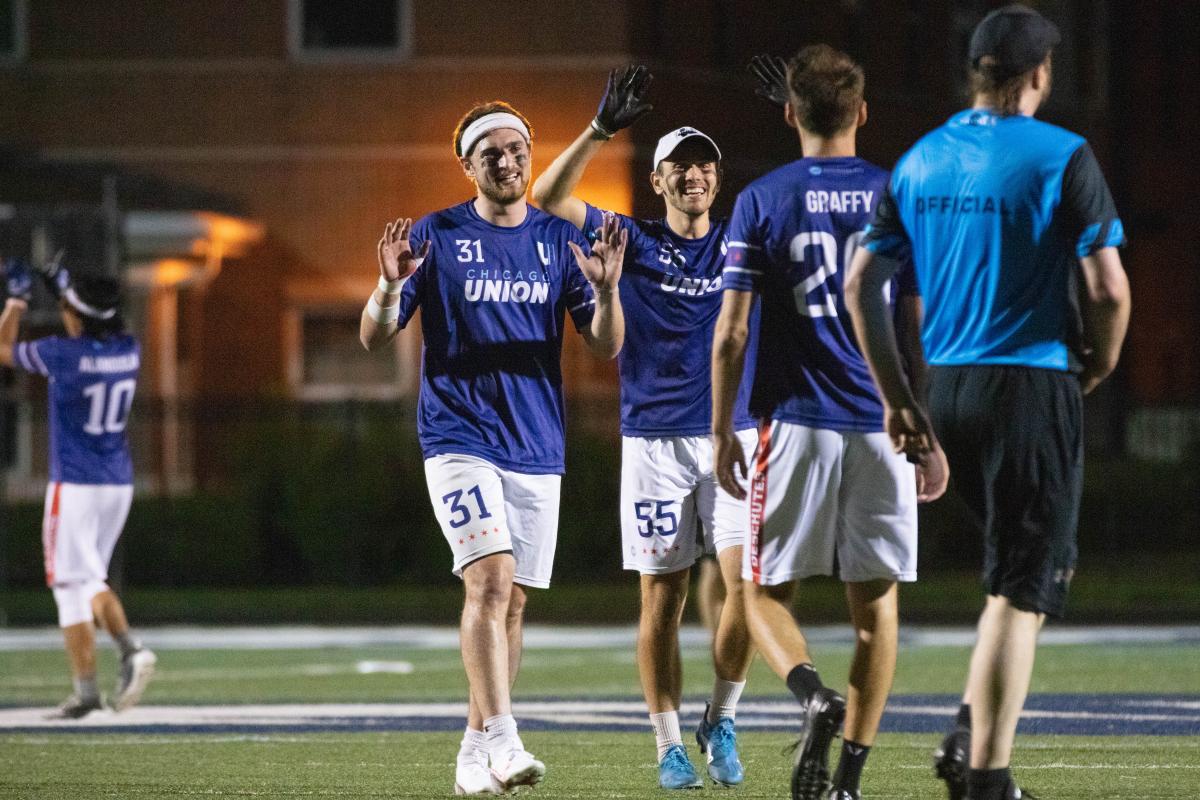 The cities of Chicago and Raleigh share a deep, decades old rivalry in the amateur divisions of the sport, but are meeting for the first time at the pro level in tonight’s second AUDL semifinal matchup. Both the Chicago Union and Raleigh Flyers mounted second half comebacks in their respective playoff wins to clinch their Championship Weekend bids, and both squads feature top end talent on both their offensive and defensive rotations.

The most battle tested team in the bracket this weekend, Raleigh emerged from the gauntlet that is the Atlantic Division with a stellar road win over the favored Breeze last Friday night. Yes, the Flyers have the most losses among this weekend’s competitors, but each of their four losses—all against playoff teams—in 2021 came by a single goal, with two coming in sudden death double overtime.

Raleigh’s resiliency, versatility, and offensive might have paced the team’s successes all season long. And since returning from injury after missing the entire month of July, Captain Eric Taylor’s play has emblemized the Flyers adaptable system. Taylor started 2021 scorching hot as an offensive striker, tossing 16 assists and averaging over 500 yards of total offense in his first three games. But in the past three games, Flyers Head Coach Mike DeNardis has implemented Taylor as a dual threat on offense and defense, inserting the star into situational lineups with great results; Taylor was instrumental in Raleigh’s win versus DC, launching pulls to put the defense in favorable position, and finishing with one assist, two goals, and a crucial block late in the first half.

But even during Taylor’s month-long absence in the middle of the season, Raleigh thrived using their depth and number one overall offensive attack. The Flyers employ the most balanced system in the AUDL this season, able to strike quick with hucks, but also exceptionally efficient; Raleigh leads the league in both scoring (23.2 goals per game) and offensive efficiency; the Flyers currently boast the most efficient offense in league history. Sol Yanuck, Allan Laviolette, Matt Gouchoe-Hanas, and rookie receiving sensation Anders Juengst have done most of the scoring damage this season, but this is a Raleigh lineup that still features one of the best big duos in Henry Fisher and Jacob Fairfax, as well as the always dangerous Terrence Mitchell; the Flyers can hurt opponents in a variety of ways.

In terms of both personnel and strategy, Chicago may have the best defensive answers for Raleigh of any of the teams at 2021 Championship Weekend. Nate Goff and Drew Swanson are ready-made matchups for Fisher and Fairfax, and will have to lock down the deep space to stifle the Flyers ability to stretch the field. Goff and Swanson are two of the best takeaway artists in the AUDL, having already combined for 35 blocks this year, one of the highest totals of any two teammates. Von Alanguilan is one of the best lockdown coverage defenders in the world, and Peter Graffy has championship experience, as well as the number three spot on the league’s all-time blocks leaderboard.

But as important as Chicago’s defensive presence will be in tonight’s matchup, the game will likely come down to the Union offense and their ability to play consistently for four quarters. Chicago is tied for third in the league in offensive efficiency, but they struggled in their Central Division championship matchup with Minnesota to consistently move the disc. Rookie Paul Arters had his best game as a pro, Pawel Janas did his usual five assists and 500-plus total yards, and Ross Barker finished with four scores without a turnover. And yet still the Union needed a 5-0 run to close out the game. The Union offense values possession over potency, and while their deep game has to be respected—Janas to Barker is a great connection in deep space, and the Union completed 77 percent of their hucks against Minnesota—Chicago doesn’t love to huck the disc, and that can lead to their offense tightening at times if their backfield handler rhythm is off.

Of the two teams, Raleigh is the only one with Championship Weekend experience; they lost to Madison in 2015 in their lone appearance. A win today would carry either franchise to new heights, and vault them into tomorrow night’s championship finale.