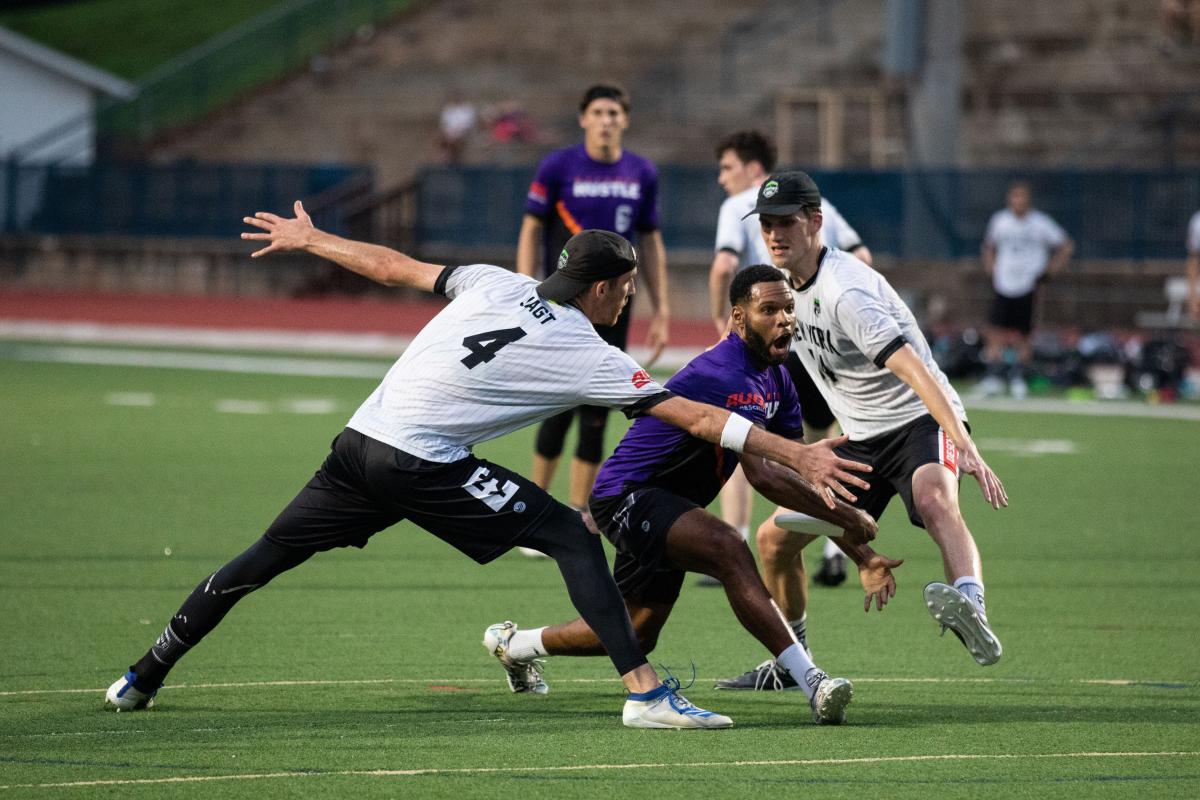 Available to watch live on AUDL.TV on Sunday at 7:45 PM/ET

The Atlanta Hustle and New York Empire will meet for the second time ever, and now with a spot at 2021 AUDL Championship Weekend on the line. The Hustle won in Atlanta 22-21 in their Week 8 tilt, one of the more thrilling matchups of the regular season. But after falling to the Hustle, New York won their next six in a row to close out their schedule, and now will host Atlanta in Saturday’s AUDL Game Of The Week playoff showcase.

The reigning champion Empire enter the postseason with one of the best performing offenses this year. Led by reigning MVP Ben Jagt, who is having another all-time individual season, New York features the most heliocentric system in the league, and they can exploit numerous single coverage matchups to their advantage, seemingly at will; Jagt has 25 assists and 27 goals in his last six postseason appearances, including a five-assist, six-goal MVP performance in the 2019 championship game. Ryan Osgar and Jack Williams are both strong candidates for 2021 All-AUDL First Team honors, and rookie John Lithio has been one of the best deep space receiving threats all season. New York is fifth in scoring (22 goals per game) and third in offensive efficiency, and they commit the third fewest turnovers per game (15.2).

And while the Jagt-Osgar-Williams hydra is the most fearsome feature of New York’s offense, the play of first year Empire thrower Elliott Chartock has been nothing short of stellar. Chartock led the league in total yards per game (589) during the regular season, throwing 31 assists and 574 completions (96.1 percent) as New York’s primary handler; against Atlanta in July, Chartock had his best game as a pro, tossing five assists, and setting career highs in completions (90) and throwing yards (688).

Defensively, the Empire are not quite at the level of the New York team that won the 2019 title, but they still apply ample pressure to opposing offenses. Ben Jagt, Jeff Babbitt, and Ryan Drost lead the team in blocks, combining 48 takeaways in 2021. The Empire have held their opponents to 20 goals or fewer in three of their last four games, and have 10 or more blocks in each of their last three games.

Atlanta was atop the division standings following their Week 9 win over the Thunderbirds. But August was unkind to Atlanta, as the Hustle dropped two out of their last three games of the season, narrowly avoiding a three-game losing streak with a Week 12 sudden death double overtime win in Pittsburgh. And after having one of the top ranked defenses in the AUDL during the first half of 2021, the Hustle have now surrendered 20 or more goals in each of their last five games; the most Atlanta allowed during a game in their first seven contests was 19.

The Hustle offense is one of the most dangerous lineups this year. Despite averaging the third fewest team completions per game (204), Atlanta sports a top five offensive efficiency rating; the Hustle dig the longball, and with Austin Taylor, Antoine Davis, Elijah Jaime, Matt Smith, Parker Bray, and Karl Ekwurtzel, they are very successful in deep space. In their win over the Empire, Atlanta completed 9-of-12 hucks on the night, with Davis having a career night, scoring a game-high six goals and racking up 408 receiving yards without committing a turnover; the Hustle will need a similar effort from the all star on Saturday.

With a win at home, the New York Empire would qualify for their third straight Championship Weekend appearance, and fifth in eight seasons as a franchise, and preserve their right to defend their 2019 title. Atlanta has never made it to the AUDL semifinals, with just one playoff win in their six-year history. History and pedigree side with the home team, but 2021 has shown repeatedly that neither of those things matter much in the new landscape of the AUDL.