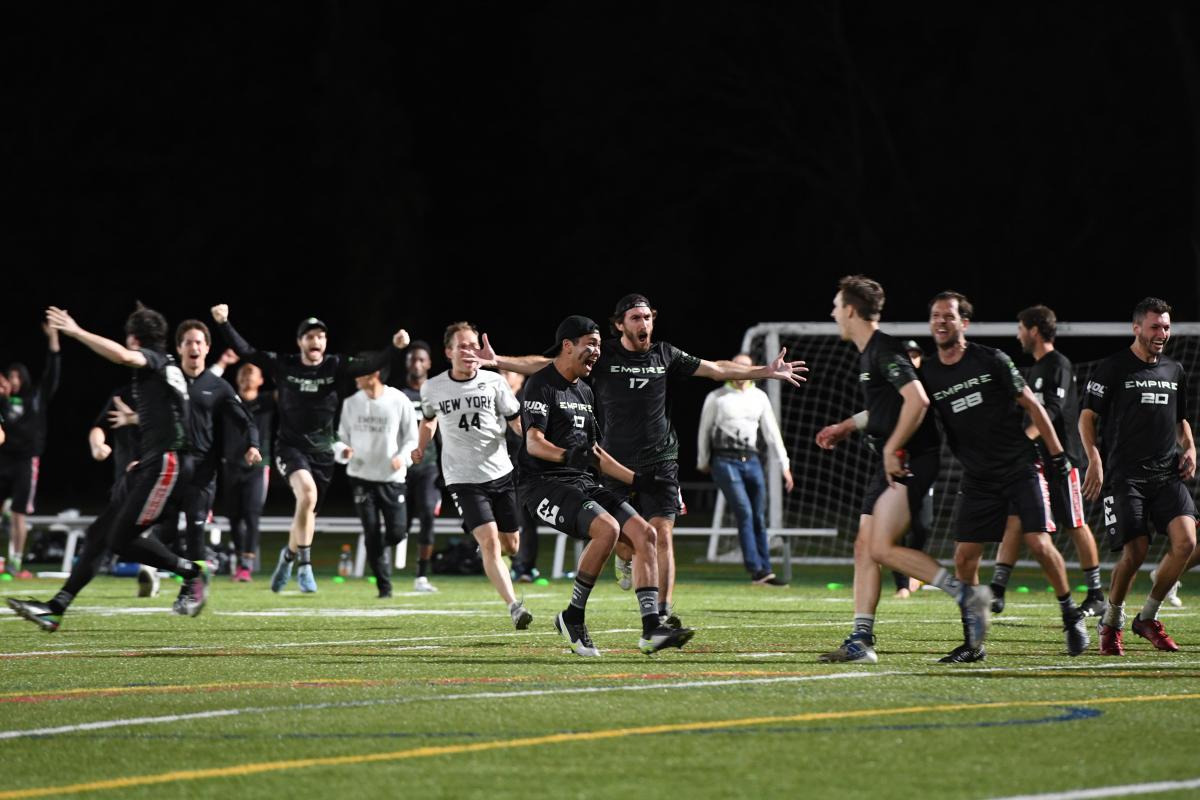 2021 AUDL Championship Weekend this Friday with back-to-back semifinal matchups to determine who will play in the league championship game on Saturday night at Audi Field. Tickets are available now. All three games will be available live on AUDL.TV.

The San Diego Growlers will face the reigning champion New York Empire at 4:00 PM/ET in the first semifinal, while the Raleigh Flyers will face off with the Chicago Union at 7:00 PM/ET. The winner of each semifinal will advance to the AUDL Championship Game on Saturday at 7:00 PM/ET.

Here's a quick summary of all four teams this year. 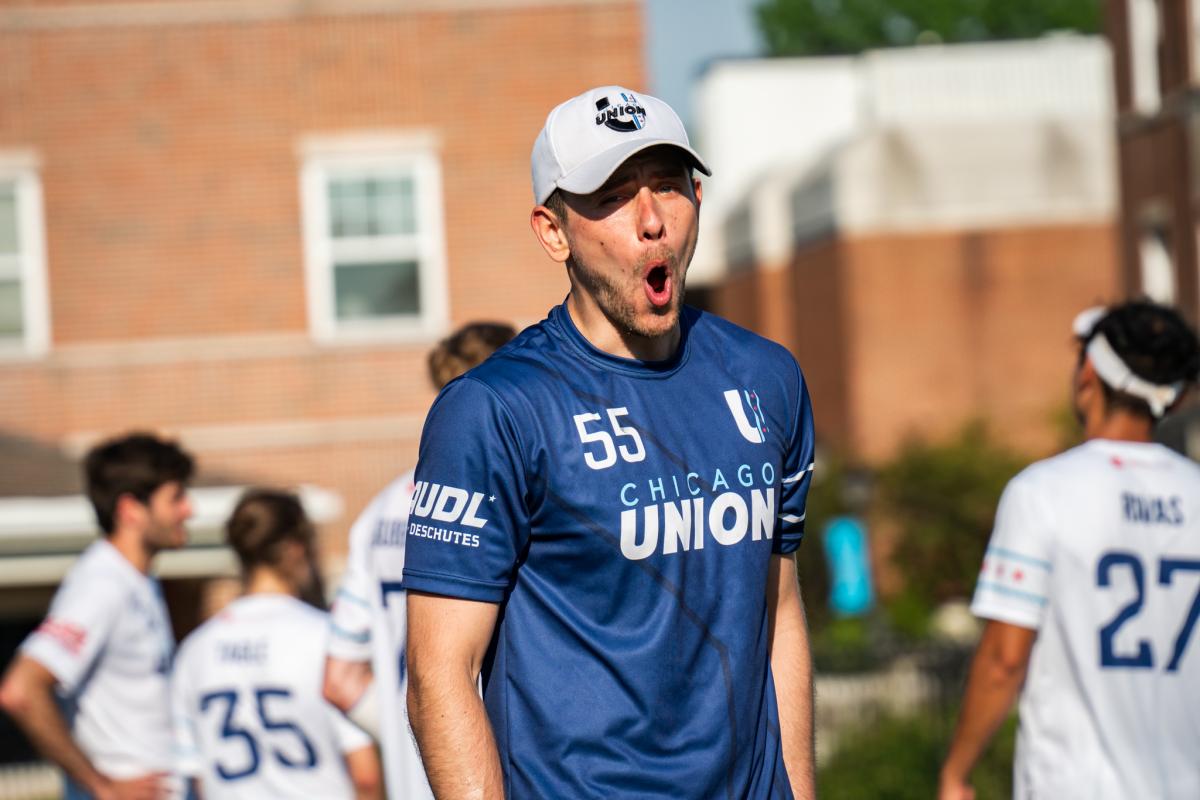 Chicago has had one of the most balanced attacks throughout the 2021 season, registering in the league’s top five in a host of categories both offensively and defensively. Pawel Janas to Ross Barker is one of the most potent one-two punches in the AUDL, and the roaming giants of Nate Goff and Drew Swanson provide Chicago with a terrific defensive canopy.

Rookie and multi-tool striker Paul Arters has been the Union’s x-factor all season long—he had his best performance of the season in Chicago’s divisional title matchup with Minnesota, and adds a vertical dimension to Chicago’s attack. Defensively, Peter Graffy’s presence in the lineup has coincided with Chicago’s best performances; the former champion helped ignite Chicago’s Week 9 fourth quarter blitz in Madison against his prior team, and adds a visible confidence to this team.

If the Union can maintain offensive holds and not play too tight, this Chicago defense has the capability to tighten the screws against any offense. They proved that late against the Wind Chill in the divisional title game, ratcheting down their handler defense in the fourth quarter, and closing out the game on a 5-0 run to win their first playoff game in franchise history. 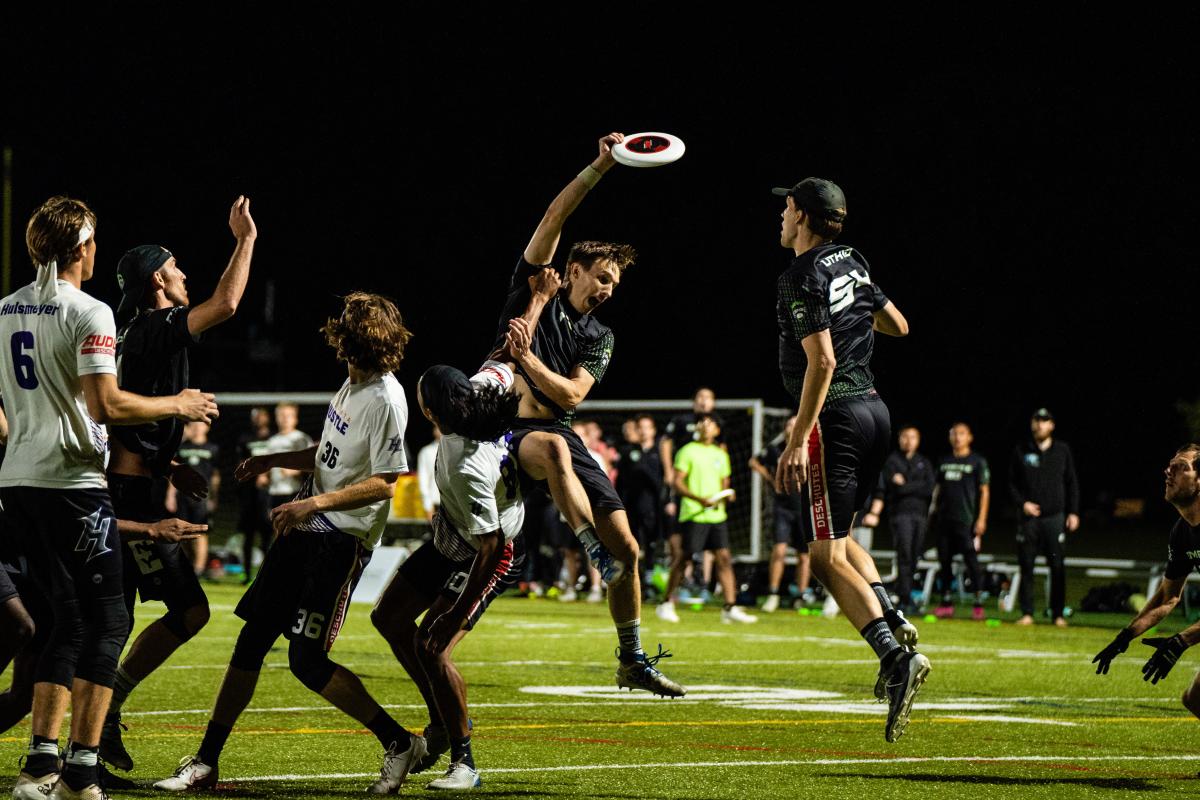 The reigning champs pulled no punches in their thrilling 22-21 win over Atlanta in their playoff matchup, deploying their star quartet of Ryan Osgar, Jack Williams, Jeff Babbitt, and Ben Jagt heavily down the stretch, and landing a variety of haymakers on their way to an epic come-from-behind win. And that’s the thing with New York: Their best will beat your best, straight up, more times than not. That’s why they won a championship in 2019, and it’s why they’re still standing strong after the gauntlet that has been the 2021 Atlantic Division.

Jagt is playing at the same MVP level as 2019. He registered 375 yards of offense and eight scores without a turnover, including two SportsCenter-worthy plays in the clutch: the game-saving block at the end of regulation, and a layout goal in overtime in New York’s playoff win. Jagt now has 29 assists and 31 goals in his last seven postseason games dating back to 2018.

Osgar is leading the league in assists in his first year with the Empire, and has eight straight games with five or more assists. One of the leading yardage getters in the AUDL all season, Osgar punctuated a 12-score, 619-yard playoff performance against Atlanta with the walkoff goal in overtime.

And Williams is having the best year of an already great pro career, acting as the fulcrum and closer for the Empire all season long. Williams registered game highs in completions (67), yards (730), and points played (39) against Atlanta, playing both ways and detonating on the 70-yard bomb to Osgar to dispatch the Hustle.

The Hustle forced the Empire to play their best game, and New York responded with a flurry of highlights; Raleigh encountered the same fate at the hands of the Empire in Week 10. New York continues to believe they’re the best team in the league, and their play backs it up in big moments. 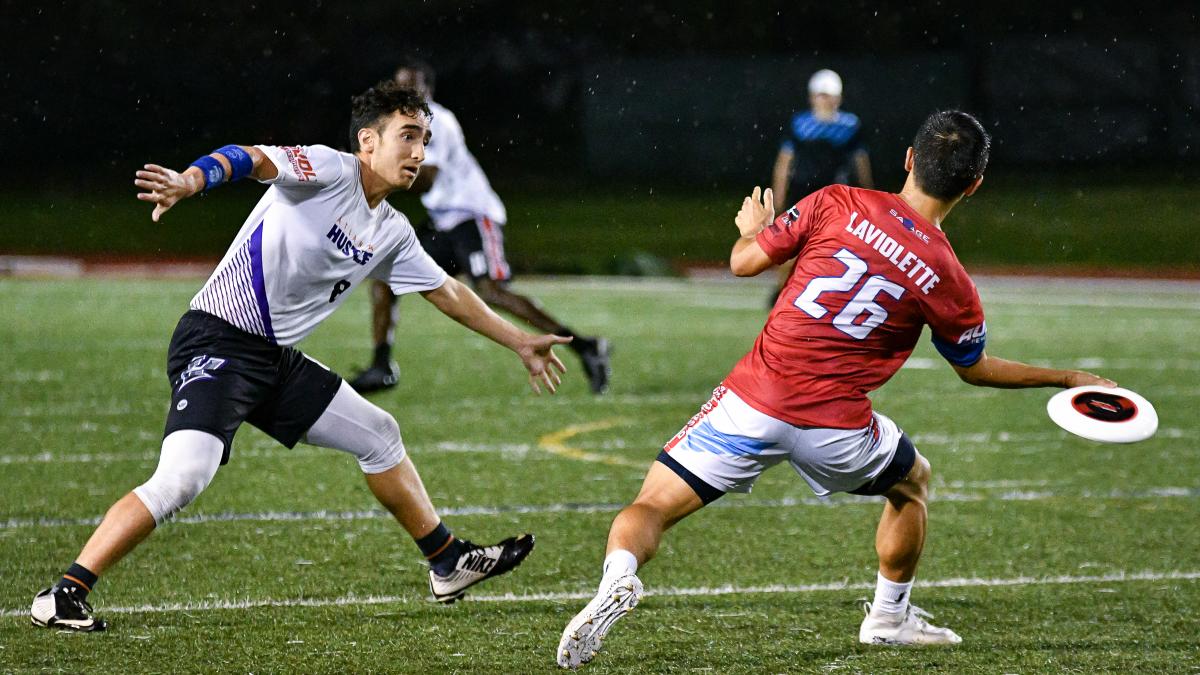 Of all the opponents at 2021 Championship Weekend, the Flyers are the most battle tested, with each of their four losses coming by a single goal; two in overtime. And as a result of their rough road, Raleigh has emerged with the most balanced and deep team left in the field.

Point blank: The Flyers have the best offense in the league, and they employ playmakers at every level of their attack. Allan Laviolette and rookie Anders Juengst are having breakout seasons as midfield cutters, while Henry Fisher and Jacob Fairfax remain one of the most imposing pairs of big receivers in the AUDL. But it’s been the backfield consistency and dynamism of Sol Yanuck and Matt Gouchoe-Hanas that has propelled this team to new heights in 2021. Yanuck has been one of the most productive throwers in the league this season, one of just four players with 30-plus assists and over 4,500 throwing yards; Gouchoe-Hanas is averaging 41 completions a game at a 98.4 percent rate.

Yanuck and Gouchoe-Hanas’ reliability with the disc has allowed Head Coach Mike DeNardis to float Eric Taylor between offensive and defensive rotations, maximizing Taylor’s all-around star abilities. Before an injury sidelined him for the month of July, Taylor was one of the throwing leaders to start the AUDL season. Since his return, Taylor has been utilized in a variety of roles, taking turns as a ballhawking defender and counter-attacking thrower for the D-line; Taylor’s second quarter block in space in Raleigh’s playoff game against DC prevented a likely Breeze score. 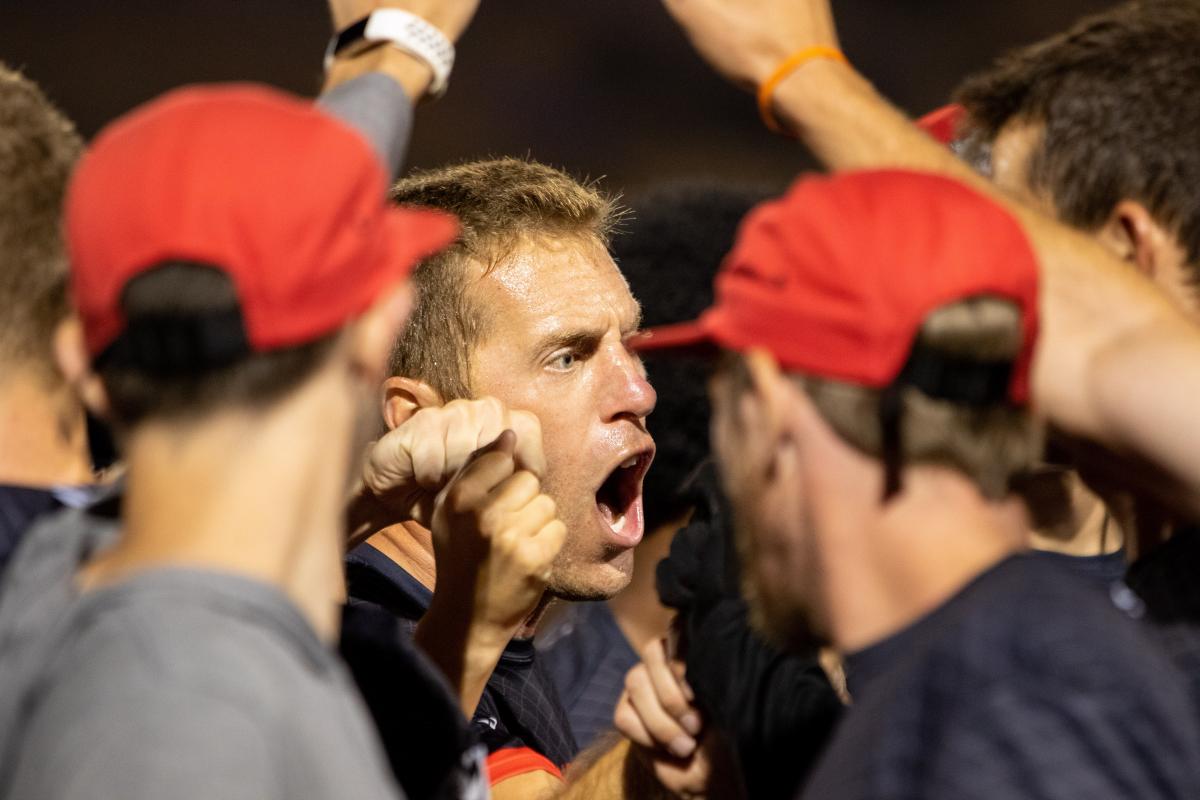 The two-time reigning West Division champion Growlers are peaking at the right time. The San Diego defense has been excellent at generating pressure and earning takeaways in 2021, and the insertion of former MVP Jonathan Nethercutt into the offensive lineup ignited the Growlers to 22 goals in the division title game. And although San Diego’s new star-caliber additions this season certainly bring the team’s ceiling to a new level, it’s been Growlers veterans that have tilted the tables in big games this season.

He doesn’t have the specific hardware, but Travis Dunn is an MVP level player. Against Dallas in the West Division championship, Dunn was on a different plane with his speed and separation in deep space, rocketing to two early goals to set the scoring tone, and finishing with a game-high 355 receiving yards. In just their first game together, Nethercutt to Dunn is an already lethal  scoring combination—Dunn’s All-AUDL caliber footspeed and timing are perfectly suited for Nethercutt’s high velocity hucks—and Nethercutt’s presence in the backfield allows Dunn to operate more readily in his striker role downfield.

Goose Helton is coming off the best game of his season, and possibly career. Helton moved into first all-time on the league’s assist leaderboard with a five-assist, four-goal, 535-yard, zero turnover showstopper in the West final. The 37-year-old continues to play at an all-star level with a high volume workload, and is a natural fit alongside Nethercutt; the two most recently played together with Raleigh from 2017-18.

And yet for as much as the offense has been dominating the headlines since their playoff popoff against the Roughnecks, the Growlers defense has been the key to much of the team’s successes in 2021. Led once again by Steven Milardovich, San Diego has a knack for big plays in tight moments, and constricted a solid Dallas offense to just 18 goals. Milardovich could be San Diego’s team MVP, and his DNA is all over the Growlers defensive playstyle. San Diego is versatile in coverage, and able to swap out defenders at different levels while still maintaining good matchup integrity.

The Growlers throwing haymakers out of the gate against an intimidating Dallas defense really solidified them as a championship contender. This team has two former MVPs, depth, defensive intensity, and are riding a wave of confidence after their home playoff win.