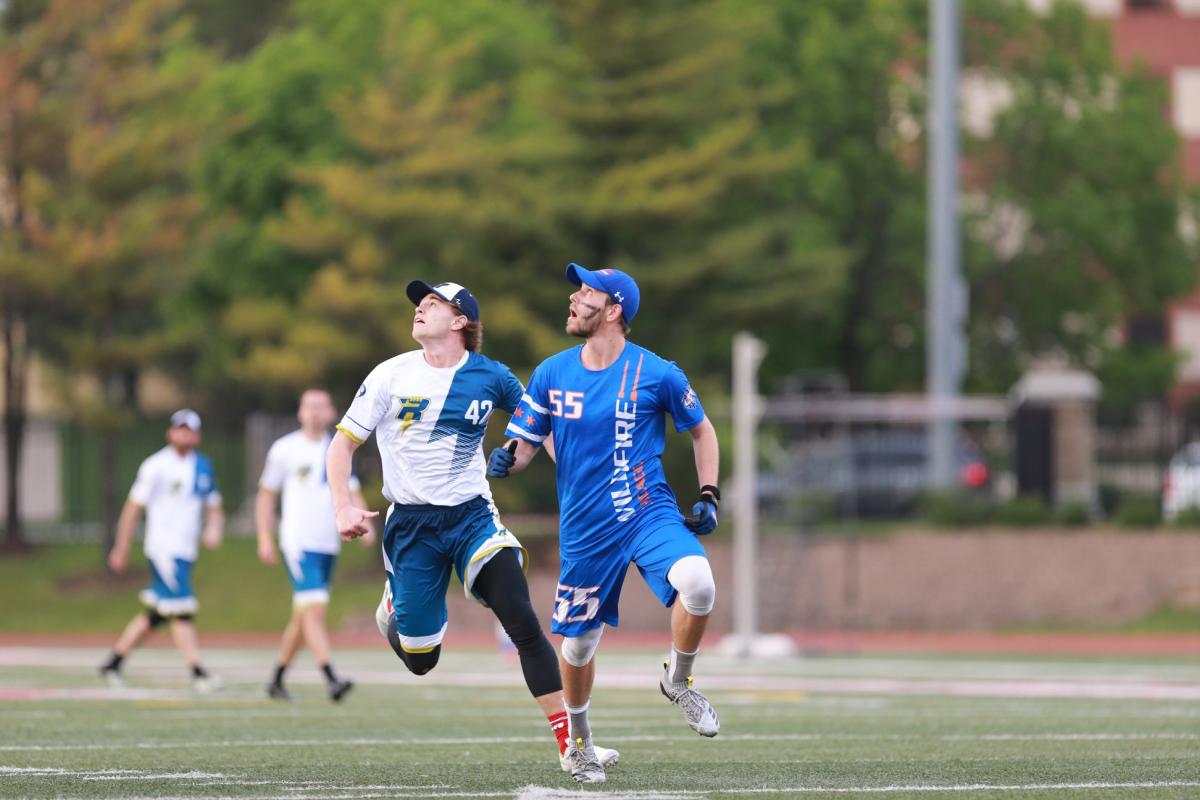 Usually, Memorial Day Weekend is one of the greatest four-day stretches of ultimate every year, with College Nationals as the annual landmark, complemented by an array of interesting midseason AUDL matchups. For each of the past four years, I’ve been amazingly privileged to call a pro game on Saturday night followed by the semis and finals of the college championships on Sunday and Monday, a special and satisfying marathon weekend that always remains one of my favorite memories every year.

Unfortunately, we’re still waiting for the lives we’ve long enjoyed to return, while wondering if things will ever again resemble the good times from the past. But setting gloominess aside, hopefully this weekend gives everyone a chance to relax a bit, and we’ve got another intriguing Saturday night retro-tripleheader to whet your ultimate appetites. Fire up the grill and the AUDL’s Facebook Live for some tasty divisional dishes, including two of my top 10 all-time Forgotten Gems! 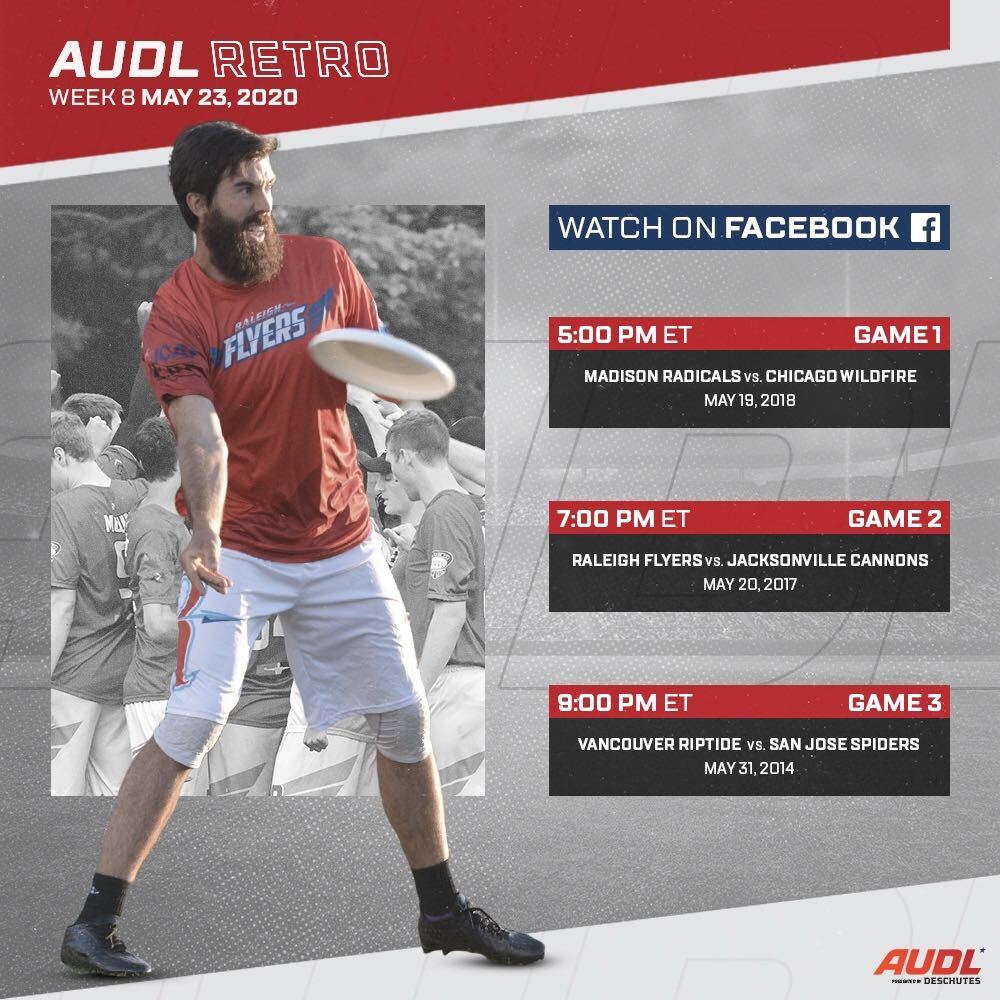 Pawel Janas, you may want to skip this one, unless you want to study Madison’s amazing defense some more. If so, then this would be a perfect game to re-watch. The Madison Radicals started a bit slowly in this one, allowing seven goals in the first 12 minutes before permitting just nine more over the remaining 36, with a transformative 9-1 run recalibrating the evening. Sterling Knoche and Logan Pruess each tallied three blocks to lead the Madison D-line, which flummoxed the Chicago Wildfire’s undermanned and less-experienced squad. One thing to watch from the Wildfire standpoint is Janas and Kurt Gibson putting the team on their backs. Together, they combined for 135 completions and four throwaways, with 11 assists and three goals. Despite the individual brilliance from Janas and Gibson, the Radicals’ team approach was far superior, with 16 different players scoring goals and all 20 active players registering at least one score or block. This marked the the 12th straight win for the Radicals over the Wildfire in the rivalry, but even in defeat, some Chicago leaders were starting to imagine their resurgence. “They’ve got a system that they do very well,” Gibson told me after the game, “and our guys are just very young and haven’t played in big games like that and before where the expectations are a little bit higher. Honestly, we were plagued by getting in the moment and making stupid decisions. Guys were just not ready to handle the challenge of getting punched in the mouth a little bit..I don’t think we’re nearly as bad as what we portrayed.” One could argue Kurt was correct, as the Wildfire have played the Radicals much better in each of their four meetings since. In those four matchups later in 2018 and 2019, Chicago either won or lost by three goals or fewer.

It did not take long for the Raleigh Flyers and Tampa Bay Cannons to develop a spicy rivalry in the AUDL. They both joined the league in 2015, and in a South Division that did not yet include the Texas teams, the Flyers and Cannons were highly competitive and contentious immediately. The Cannons were cruelly beaten in double overtime in the 2015 South Division title game, and then their win total dropped from 10 to 5 in 2016. By 2017, however, the Cannons were locked and loaded again, as illustrated by the fact that they became the first team in AUDL history to beat the Dallas Roughnecks, knocking off the undefeated defending champs 24-22 on Friday, May 12. That’s the preamble for this North Carolina-Florida tussle that transpired eight days later. This was certainly Raleigh’s best regular-season squad, anchored by 2017 league MVP Jonathan Nethercutt, along with Jacob Fairfax, Noah Saul, and Goose Helton. But between Chris LaRocque, Mischa Freystaetter, Bobby Ley, and Cole Sullivan, the Cannons had plenty of firepower to defend their home turf. For most of the second half, Jacksonville played from ahead and seemed poised to rise into first place in the super strong South Division. Of course, as you’ll see, the Cannons made a couple mistakes down the stretch, and the Flyers were ready to pounce, creating an unforgettable final sequence where “The Trash-Man” capped the night in exhilarating fashion.

This Riptide-Spiders tilt was probably the most suspenseful contest of any game in my first season broadcasting professional ultimate, considering the circumstances. Entering the day, Vancouver was just a game behind the San Jose Spiders in the standings, though the Riptide had piled up their wins against the bottom tier of the West. Consequently, many wondered whether Vancouver had the chops to hang with San Jose, and quickly it became evident that the Riptide’s rising youth movement was pretty special. This was a night full of mind-bending buzzer-beaters, baffling blocks, and breathtaking bids. Beau Kittredge illustrated his MVP stature with a superb line of six goals, five assists, and four blocks, while Ashlin Joye dished eight dimes, a total that still stands as the second-highest total of his career. For Vancouver, teenage phenom Darren Wu scored five times to continue his breakout season, while Riptide Captain Derek Fenton matched Kittredge in the plus/minus column, finishing the game +11 with five goals and seven assists. The splendid individual efforts largely balanced each other out, and this game remained super tight down the stretch, tied at 21s, 22s, 23s, 24s, and 25s, before the dramatic game-winner that I still remember vividly nearly six years later.